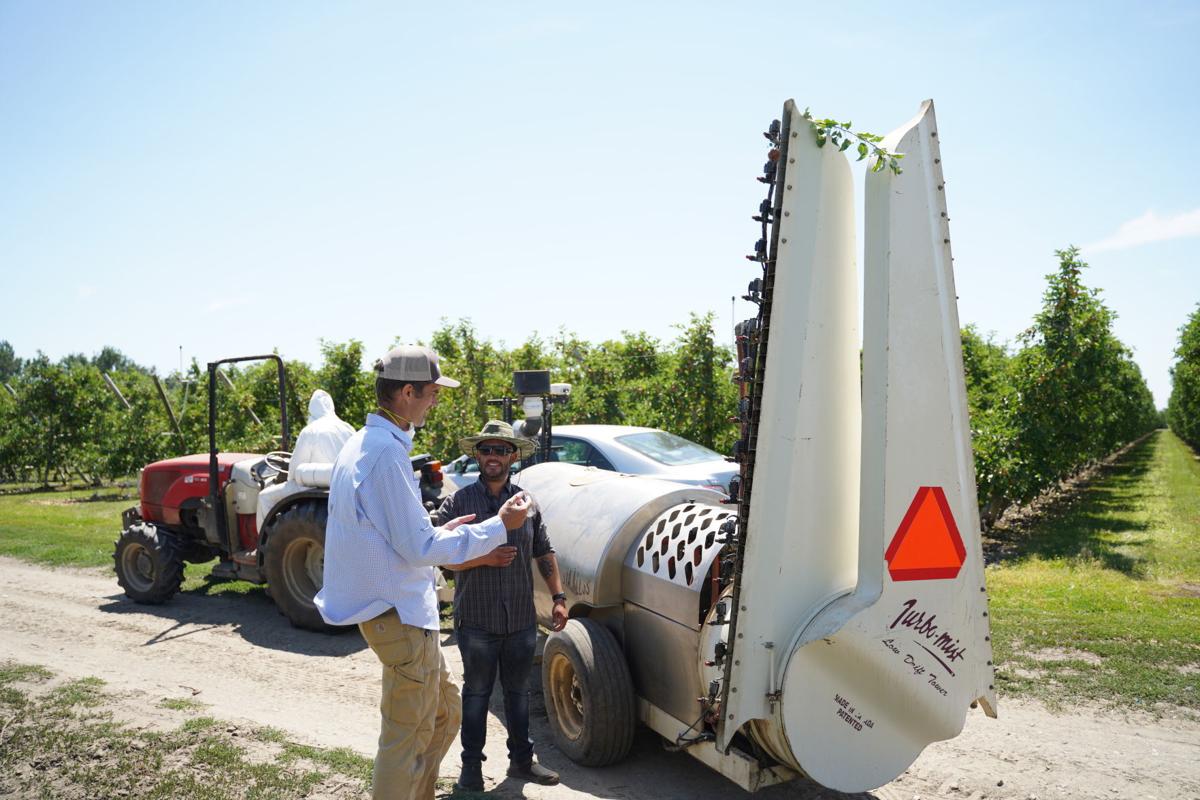 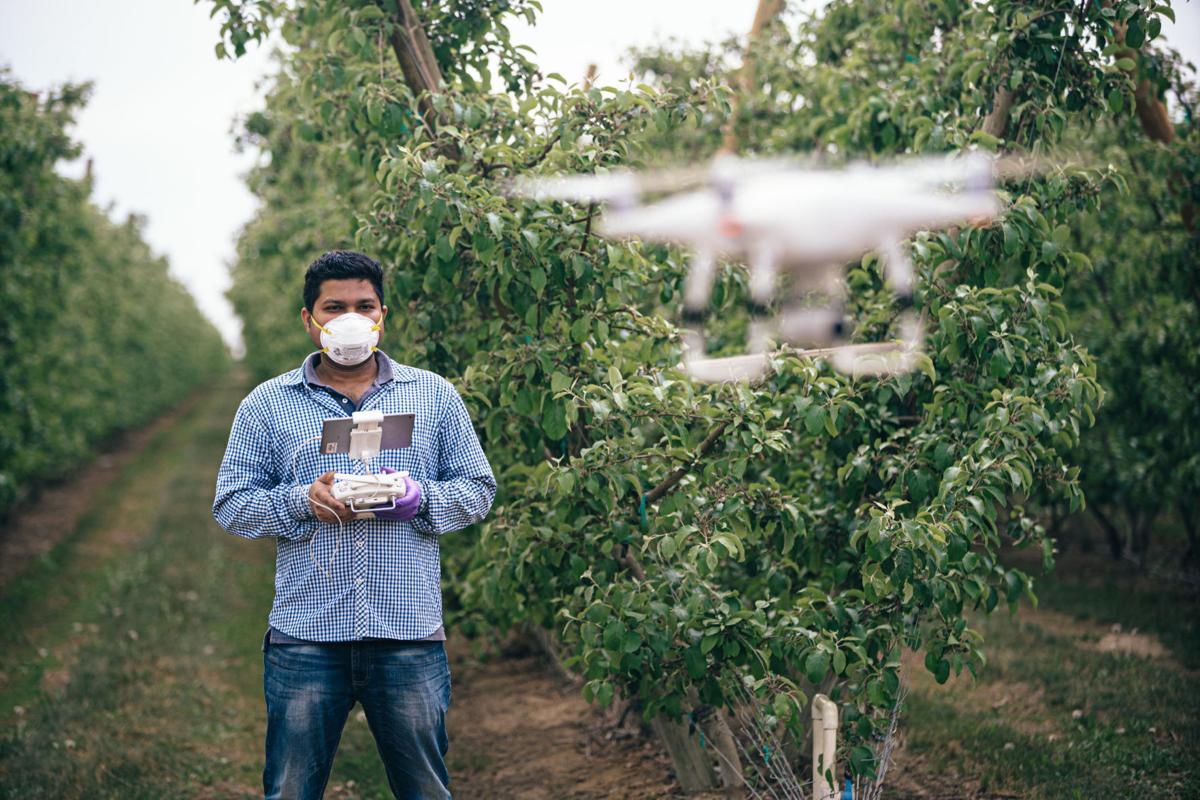 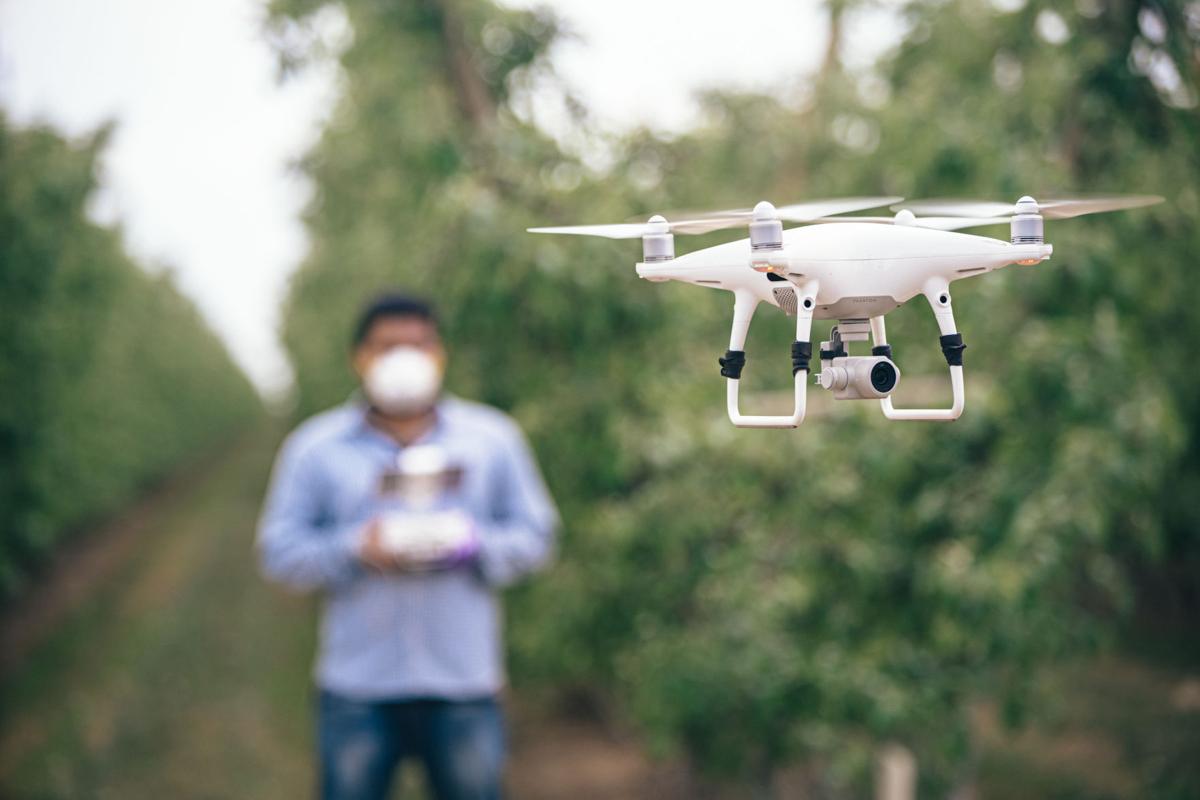 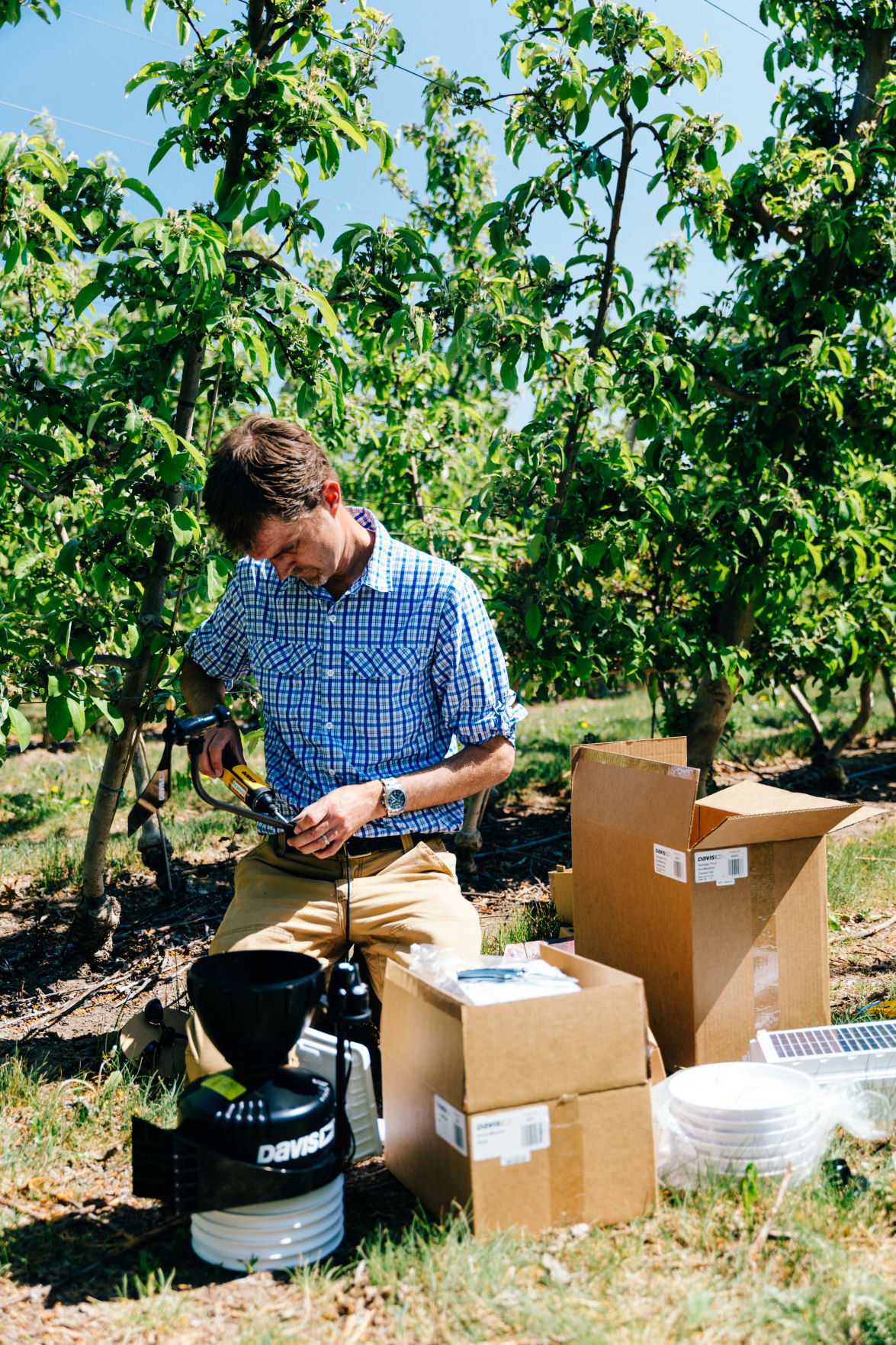 Steve Mantle assembles a Davis Instruments weather station, one of more than 50 sensors at the Smart Orchard.

Steve Mantle assembles a Davis Instruments weather station, one of more than 50 sensors at the Smart Orchard.

When Steve Mantle moved to the Walla Walla Valley, remote working was not the rage it is now.

The former Microsoft employee thought his 2018 relocation to the Walla Walla Valley would put him closer to relatives and offer a change of pace while continuing with the software company remotely.

What he didn’t realize is that it would uproot him from one career and plant him in a position to start another, creating a digital information platform for the agriculture community.

As the founder of innov8.ag, Mantle continues to partner with Microsoft but in a different way. His company provides data from machine intelligence, combined with insight from staff researchers and agronomists, to help farmers make land management decisions.

His first call when deciding to make Walla Walla home was to PocketiNet CEO Todd Brandenburg. Mantle wanted to see about getting high speed fiber internet in his neighborhood.

“Hey, what would it take?” Mantle said he asked Brandenburg. At that time, he was out of luck with the fiber connection — but that changed.

Mantle spent time flying internationally for Microsoft and also driving to the Seattle area at least twice a month. Remote working was working, essentially, but he missed the water cooler.

He was bouncing around multiple ideas with his work, including agriculture concepts, but it was all “from behind a desk,” Mantle lamented.

After getting too itchy for interaction, he called up Brandenburg who recommended setting up a meeting of minds with the late Derek Brandes, then the president of Walla Walla Community College overseeing the school’s first four-year bachelor’s program in the agricultural field.

Brandes brought in Jerry Anhorn, who was overseeing the program. Mantle asked them if he could assemble a round table discussion of growers. Anhorn and Brandes asked who he was looking for.

“I was looking for ... farmers who are serious growers,” Mantle recalled. “But also progressive types that are not averse to technology, but are also going to provide feedback where it doesn’t really work.”

The meeting was full of information and ideas. The farmers took in concepts such as block chain and artificial intelligence.

But after the meeting was over, another meeting began.

“I got pulled aside afterward by some of the farmers and they said, ‘Look, we love all this tech — it’s super cool,’” Mantle recalled. “’But we just struggle to figure out what the weather is.’”

The farmers described scenarios of sending out a sprayer into their fields, only to have a wind or rain storm blow in — time and money wasted. With big farms come big weather events and small climates, as anybody growing up in the Northwest can attest. The north side of 9,000 acres of noncontiguous farm land can have different weather than the south side at any given time.

As he was considering all of this, Microsoft dismantled Mantle’s operation. The company reorganized and the loss of Mantle’s job was part of it.

Mantle maintained a good relationship with the company and even considered taking up another job there, or at another tech giant.

Instead, he decided to innovate.

“Basically, the only way this was going to start is if I bootstrap a little company and pilot a handful of different sensors out at FirstFruits,” Mantle said. “ ... Focused on nano-climate and microclimate, as we called it back then.”

The sensors would be used to monitor and gather data for the farmers to use to make their fields and orchards “smart.”

Multiple companies were using data-driven models and apps to help growers see better results. But many of those, Mantle found, were also start-ups that would fold after a couple of years and then the data disappeared with them, leaving the growers empty-handed.

His idea was to build something that would empower the growers, giving them hands-on data that would truly utilize technology to make growing practices more sustainable and more efficient. The growers could eventually use the data for a host of other things too, such as reporting to buyers, insurers and government agencies.

“But then the struggle was — which sensors?” Mantle wondered. He would have to go out every other day to FirstFruits to install the sensors and monitor them. That wasn’t a very sustainable process, he said.

He soon discovered his move to Walla Walla placed him right where he needed to be to solve it.

Mantle’s neighbor happened to be Bob Rupar, a retired vice president at Nelson Irrigation. In a true moment of serendipity, Mantle saw some sensors in Rupar’s garage.

“I said, ‘Bob, where are you getting these soil moisture sensors?’” Mantle said.

Rupar directed him to the Tucker brothers, Jeff and Todd, with Tuctronics, a Walla Walla tech company that designs and ships the very sensors Mantle needed for his operation.

The Tuckers and Rupar are now members of innov8.ag’s advisory board.

Mantle teamed up with them to install the sensors at FirstFruits as plans began to unfold during the summer of 2019.

A student from the community college used the orchard as a capstone project and began collecting the insights from the sensors, along with data for labor, irrigation, chemical spraying and more.

“Learned from that a lot of different things,” Mantle said. “But ultimately learned that there definitely was more than a hobby here — there was a business opportunity.”

As he harvested more information, he continued to hear from growers. Mantle said he didn’t want to have a John Deere scenario where farmers were stuck because their equipment has become too technological.

“I’ve heard the worst horror stories,” Mantle said. “A grower, his tractor was dead out in the middle of a field — $300,000-$400,000 tractor, brand new. They couldn’t fix it until a technician dispatched out from corporate to actually pull one of the cylinders out, get the serial number off it so the serial number could go in the software. They said, ‘don’t do anything.’

Quite the opposite, Mantle sees innov8.ag giving farmers access to statistics that will seed success in everyday operations.

In November last year, the company moved from being a limited liability company to a corporation to begin attracting investors. The platform began to develop.

Apples were chosen as the starting point because they are the state’s largest crop. The location of FirstFruits also provided for community college and Washington State University students from Pullman and the Tri-Cities extension to easily access the area. Apple crops also require heavy growth investment — at least three years — before crops become productive. Apples need lots of labor too, so it provided a large data point there.

What’s transpiring at the Smart Orchard is a grafting together of technology and agriculture. Drones fly over head, weather sensors spin in the breeze, LiDAR-based sprayers wheel down the rows of trees, and hundreds of sensors continuously pour in real-time data for farmers to literally see their work in their hands.

And unlike past platforms that take the data with them when they close, the idea is that this data is for the growers to keep.