The Rose Street Safeway store has a new neighbor in The Lodge apartment complex, expected to open February 2021. 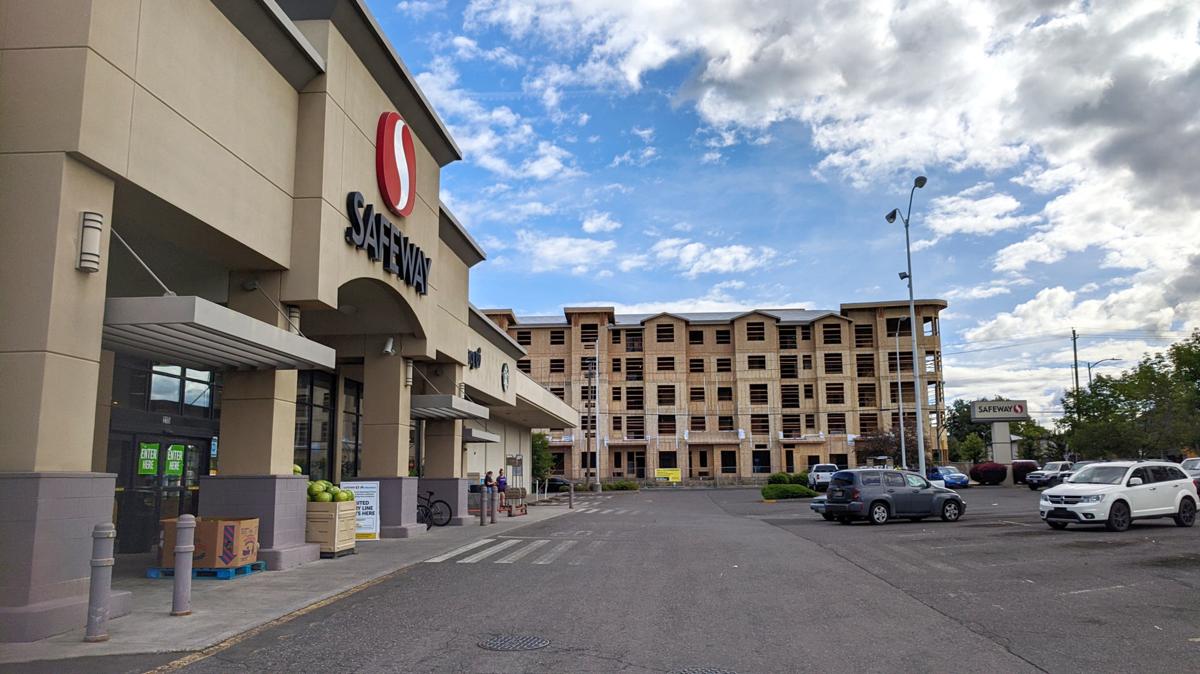 Safeway on East Rose Street now sits directly in the shadow of a five-story apartment complex that will presumably feed customers to the store.

The Rose Street Safeway store has a new neighbor in The Lodge apartment complex, expected to open February 2021.

Safeway on East Rose Street now sits directly in the shadow of a five-story apartment complex that will presumably feed customers to the store.

Walla Walla’s downtown Safeway is getting a bit of a facelift as store employees get ready to welcome a party of potential new shoppers moving in across the street.

The grocery store on East Rose Street now sits in the shadow of a five-story apartment complex called The Lodge Apartments, under construction possibly for completion by February 2021 (see story, A1).

Store Director Steve Wenzel said “some sort of sprucing” will happen at the store in anticipation of The Lodge and residents of its more than 120 units.

“With new folks moving in next door, we want to make sure they have everything they need,” Wenzel said.

The project is expected to begin at the end of June with limited interruption to everyday services at the store. It’s expected to take about five weeks to complete.

Wenzel said there will be a new seating area for the store’s Starbucks coffee shop. The deli department will be expanded with more “case footage” for displaying more meals, along with more ready-to-eat options, he said. More modern, updated displays and shelves will be installed in other areas.

The parking lot will also undergo some minor changes, although Wenzel isn’t sure what that will look like. It will at least be repainted and touched up this year.

The remodeling isn’t expected to be major, Wenzel said, but it is due since stores typically undergo remodels every decade or so.

He said this is almost purely in anticipation of the tenants coming to The Lodge.

It’s a lesson in Economics 101 — supply and demand.

New technology is already making its way to the store with self-checkout stands finally being added — making it the last Albertsons-owned store in the city to get the stands.

Wenzel said the stands will not replace employees.

“A lot of people have their favorites here,” Wenzel said. He assured that “nobody’s getting fired,” and the stands are only there to help foot traffic flow faster — an added bonus during COVID-19-induced social distancing.

Wenzel said he sees a revamped Safeway in the downtown area as a much-needed factor for continuing economic recovery.

“It’s a win-win for our community,” Wenzel said.

Safeway has long been a centerpiece for Walla Walla’s downtown, having once been housed at 126-128 E. Main St., which is now home to Beehive Cut + Color Bar and Main Street Furniture Co. The store operated in that space from 1935 to 1950, according to research from citizens group Walla Walla 2020.

Prior to that records from the organization show Safeway was once located at 220 E. Main St. That building now houses Shiki Hibachi Sushi. There was also a location on Alder Street.

The East Main and Alder locations were shut down when the Rose Street location was built in 1950, according to U-B archives.

The Rose Street site was rebuilt in 1973, according to Walla Walla County public records. It also had big remodels in 1993 and 2002.

Joe Drazan at Bygone Walla Walla Project has Union-Bulletin photos showing one Safeway store during the 1960s on the corner of Fifth Avenue and West Main Street — the spot is now a parking lot.

Wenzel has been picking Drazan’s brain for more information about the history of the store.

Wenzel hopes Drazan is able to dig up some nuggets that will lead to historical context for the store. He hopes it can be translated into history plaques and murals that visitors can admire.

Wenzel said he knows the store has a strong story to tell and he wants to make sure its history isn’t lost.

After the project is done, between the residents at The Lodge and the historical murals, Safeway could cement itself even deeper into the legacy of the city.

A consultant worked with Wenzel and Safeway leadership to design a better layout for the store and upgrade some of its features.

“It should be pretty easy for shoppers to navigate,” Wenzel said. “I just see it (the remodel) as such an advantage for the community here.”

After receiving almost 2,000 responses from a recent survey asking for p… Click or tap here to read more