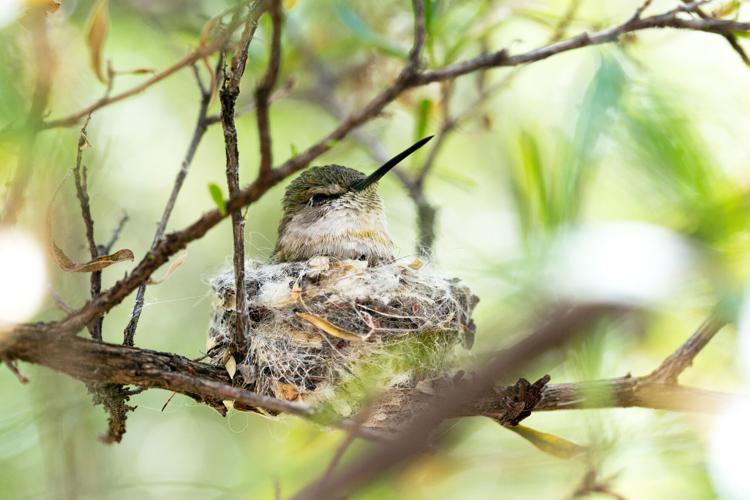 Anna’s hummingbird nests are tiny at about 1½ inches in diameter. 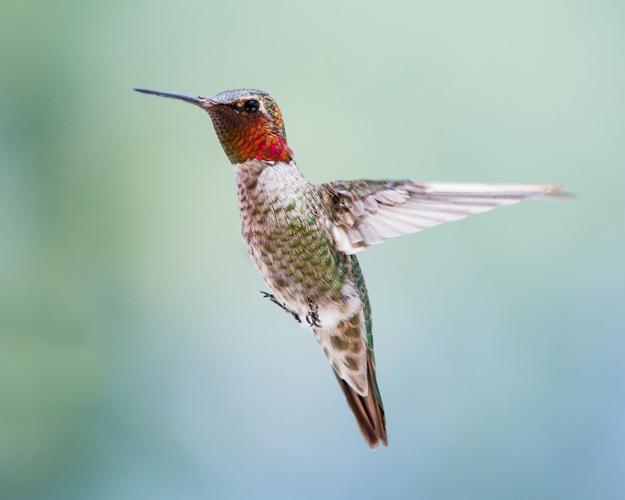 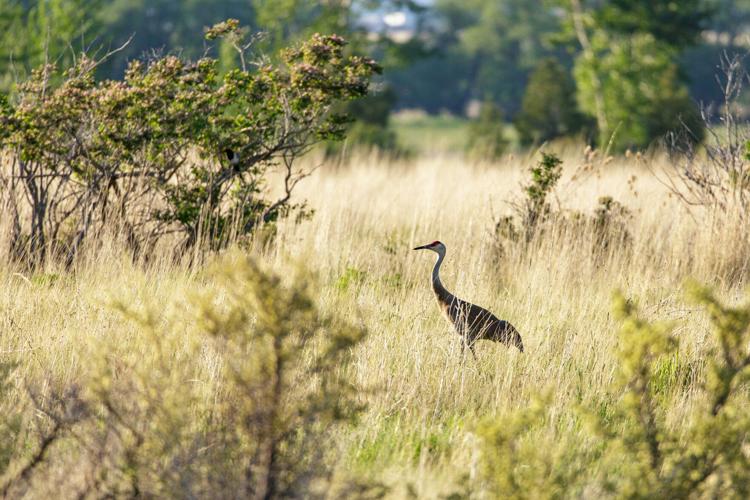 Ladd Marsh, just outside of La Grande, Ore., is home to a number of nesting sandhill cranes. 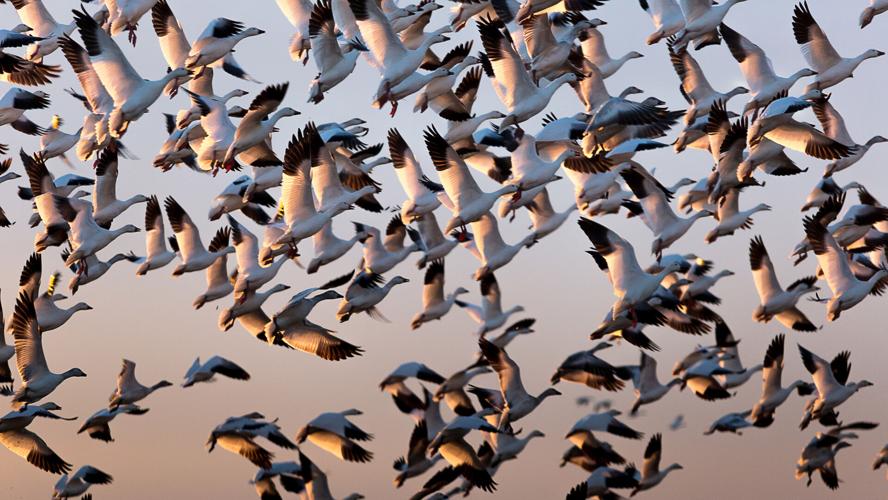 Impressive numbers of snow geese flock to the McNary National Wildlife Refuge during the winter months. 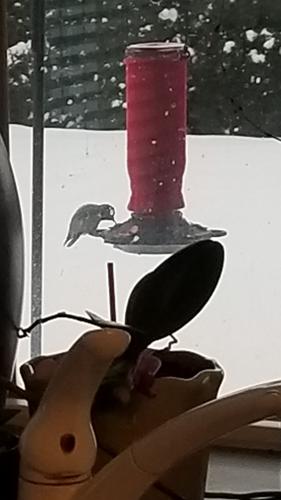 Amid a snowstorm that dropped 6-8 inches of snow across the Walla Walla Valley, a lone Anna's hummingbird sips sugar water from a feeder hanging from the awning of Linda Wasemiller's Walla Walla home in the early afternoon of Thursday, Dec. 30. 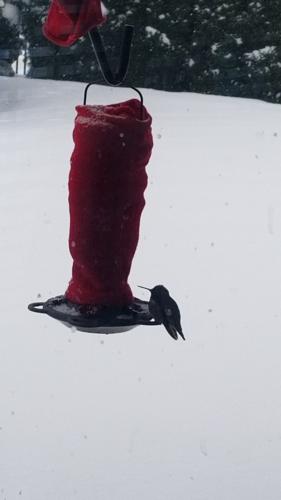 Linda Wasemiller wrapped a sock around the basin of her hummingbird feeders to insulate the sugar-water solution during late December's cold weather. Many feeders are  red to simulate a flower, so Wasemiller used red socks with the end cut off. 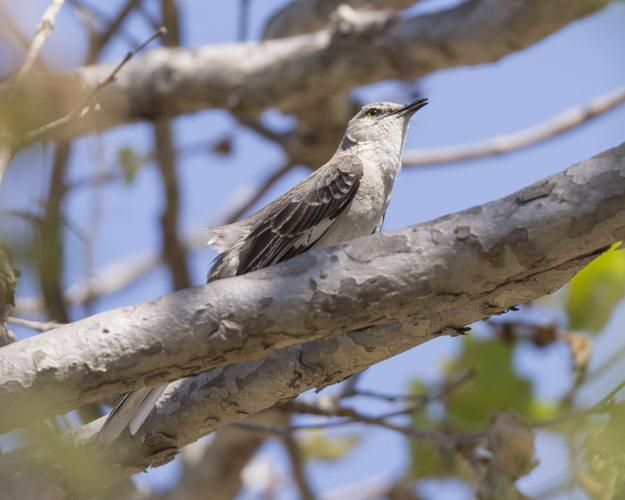 Northern mockingbirds are best known for their ability to mimic many different sounds, including machinery.

While other hummingbird species native to the Valley had long since migrated south for the winter, the Anna’s hummingbird, a relative newcomer to the area, had stayed.

Native to California and Mexico, the species has expanded its territory dramatically over the last century but tends to be less common east of the Cascades, where it struggles to overwinter.

They usually leave the Valley in August or September, but this year the tiny birds lingered, prompting Wasemiller to leave her hummingbird feeder out later and later into the year. But by December, she was shocked to see the hummingbirds still stopping by.

The birds have, on rare occasions, been seen during the winter in Walla Walla since the ‘90s, said local field biologist and birder Mike Denny. The Valley has experienced a string of relatively warm winters in recent years, Denny said, and overwintering Anna’s have become a more common sight.

With a cold front promising temperatures down into the single digits and a snowstorm on the horizon, Anna’s hummingbirds were still flitting around Wasemiller’s awning.

By the time snow began to fall before sunrise Monday, Dec. 27, Wasemiller had set out five hummingbird feeders.

Ice crystals can form in the sugar-water basin, which can concentrate the sugar mixture and dehydrate the birds. And in crystals in the tubes the hummingbirds feed from can harm the birds’ tongues. Cold food can also simply lower the bird’s body temperature.

So Wasemiller rotated the feeders every few hours, bringing a couple inside at a time to warm up the sugar water and wrap the basins with socks to insulate them slightly.

As freezing temperatures linger, she hopes that other Valley residents will also consider putting out feeders, filling them with a solution of three-parts water to one-part refined white sugar — not honey or other kind of sweetener, Wasemiller notes — that has been boiled for a minute and then left to cool.

Though they can enter a state of semi-hibernation called “torpor” during cold nights to conserve energy, hummingbirds rely on a rapid metabolism to keep themselves warm, which requires a constant supply of food.

“Their body temperature is 100 degrees Fahrenheit or more, and they have to maintain that heat,” Denny said. “If they can’t keep warm, they’re had.”

A heated feeder or a heat lamp placed nearby can also help support the bird as temperatures plummet, he suggested. By leaving out food during the winter, residents can help the Anna’s hummingbird make it through the coldest days and nights.

After all, that kind of human intervention is why the bird is here in the first place.

Little bird with a big range

The Anna’s hummingbird has been on the move for at least the last century.

Records show that the Anna’s population has been growing in California since the 20th century, with the first accounts of the species in the northwest in 1944. By 1971, the bird was appearing as far north as Alaska.

In recent decades, data show that the Anna’s hummingbird’s winter range has expanded dramatically — more than 700 kilometers in the past two decades.

In 1993, it was first spotted in Walla Walla during December by Wilbur Holly, a former mayor of the city of College Place, who spotted the hummingbird perched in one of his bushes during a snowstorm.

While other species of hummingbird that frequent the Valley migrate south during the winter, starting in July with the rufous hummingbird, the Anna’s hummingbird doesn’t go far.

Historically, members of the species at the northern edge of their range would migrate south for the winter, while others would move only relatively short distances in what Denny calls a “post-breeding wandering.” But today, Anna’s hummingbirds as far north as British Columbia appear to have stopped migrating, according to a 2017 study.

In 2017, researchers from Cornell University and California State University, Los Angeles, published a study that had considered whether the growing range was caused by climate change or new food sources provided by humans, including not only hummingbird feeders but landscaping flowers.

Plentiful food sources in urbanizing areas proved to be the driving force, the study concluded, finding that the Anna’s hummingbird had begun to overwinter in colder areas than historically so long as there was consistent food.

As landscaping with flowers that bloom year-round and hummingbird feeders have become more common, the bird’s behavior has changed.

But the Anna’s hummingbird may also be changing human behavior, the study suggested.

“People in the expanded range who provide nectar feeders in summer may leave those feeders out later into the year if hummingbirds remain in the area, and those feeders may simultaneously enhance the winter survival of hummingbirds that do not migrate,” the study’s authors wrote.

Still, the bird prefers to overwinter in areas where the lowest temperatures aren’t much colder than their historic range, even if the average temperature may be a bit cooler. A string of warm winters since 2008 may have helped establish the species in the region, Denny said.

The Anna’s hummingbird isn’t the only newcomer to the region, and other North American birds have also been on the move. When Denny attended Walla Walla University in 1978, snow geese were an uncommon sight in the county’s skies.

“We would end up on the birding hotline, and we felt lucky to see one a year,” Denny said. “Now, we have 25,000 of them that come to McNary National Wildlife Refuge. In February, the sound is phenomenal.”

Both species started appearing en masse for the same reason: an expansion of circle-pivot irrigated agriculture that snow geese and sandhill cranes can forage, Denny said.

The western mockingbird, a species adapted to arid and desert environments, has begun to move into the region as it experiences steadily drier, hotter summers and longer falls.

“A lot of bird and insect and plant species are starting to move north, and we’re seeing lots and lots of unusual sightings because of weather patterns,” Denny said.

The yellow-rumped warbler, common across North America, typically migrates south for the winter. But it has begun to overwinter in Eastern Washington and elsewhere in the Northwestern United States due to widespread Russian olive trees, itself an invasive species.

While other local food sources disappear in the winter, the warblers can sustain themselves during winter by eating the eggs that beetles lay in the fruit, or “droop,” of the Russian olive, Denny said. But the birds will likely die if they overwinter in areas where Russian olive isn’t present, he said.

Those risks can bring obvious rewards: While many bird species face extinction pressures from habitat loss and climate change, yellow-rumped warblers, snow geese, sandhill cranes and the tiny Anna’s hummingbird are all plentiful. Each are considered to be least-concern species by conservationists, and the latter’s population is estimated to be over 9 million.

The weather outside is frightful

Though the Walla Walla Valley didn’t have a white Christmas, it didn’t have to wait long for the snow. Before the sun had risen Dec. 27, the ground had already been blanketed.

That first day of a storm projected to last through the week, the birds swarmed Wasemiller’s feeders. The next day, she only saw one bird — though she did have to leave the house most of the day.

Still not seeing any birds by Wednesday, Dec. 29, Wasemiller guessed they might be going into torpor for most of the day.

In British Columbia, CBC News reported Wednesday that 15 Anna’s hummingbirds had been brought in to a wildlife rescue by concerned people who had found them stunned or injured, though it’s possible some of the birds were simply in a state of torpor.

The snow came down hard Thursday, Dec. 30, dropping a fresh 6-8 inches for a total of around a foot of accumulation.

When Wasemiller had started setting out the feeders each morning at first light, the hummingbirds had buzzed into view straight away, expectant and hungry. That morning, she saw no birds.

But, in the afternoon as she walked in her door, there he was. A male Anna’s hummingbird, cheeks an iridescent pink, perched at the feeder taking in all the calories it could.