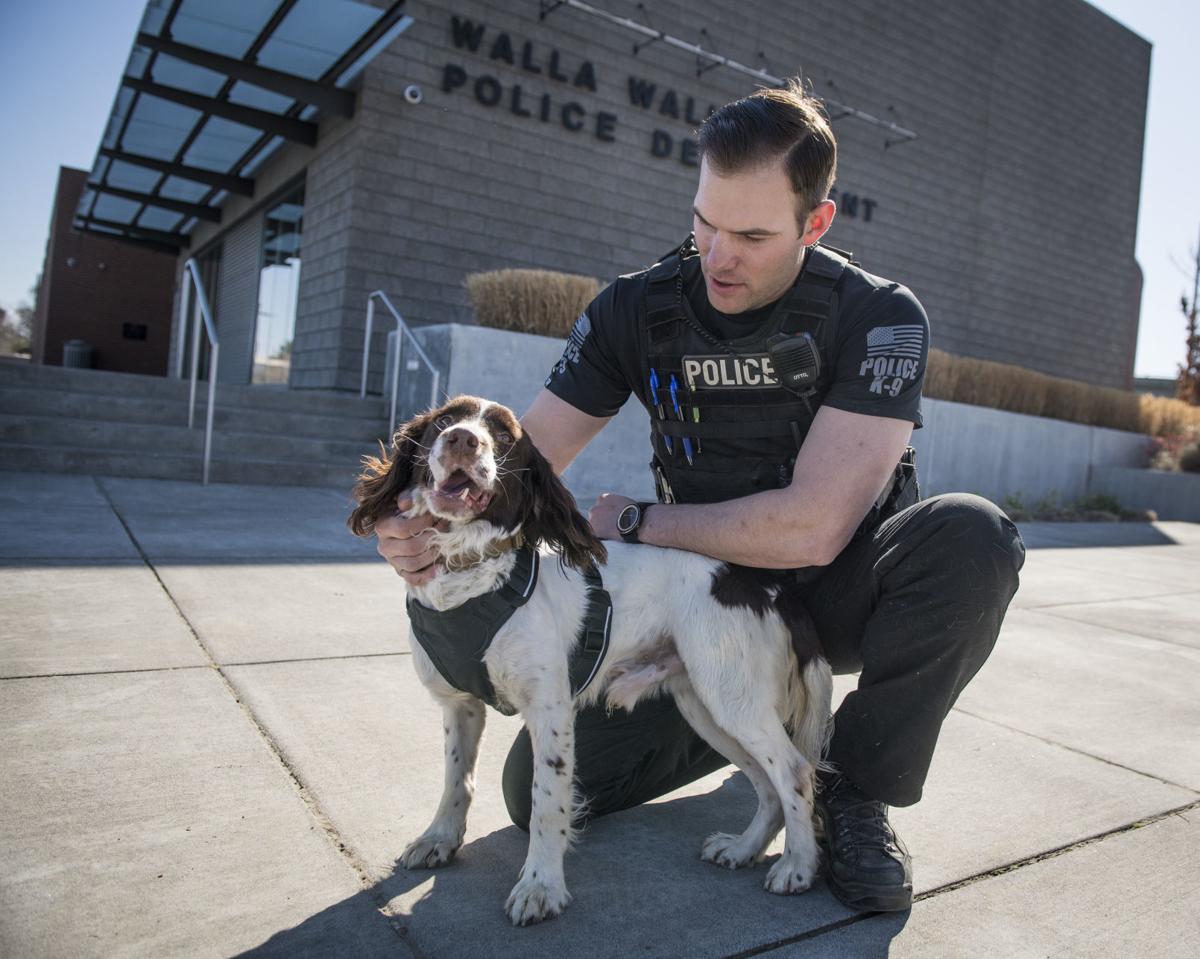 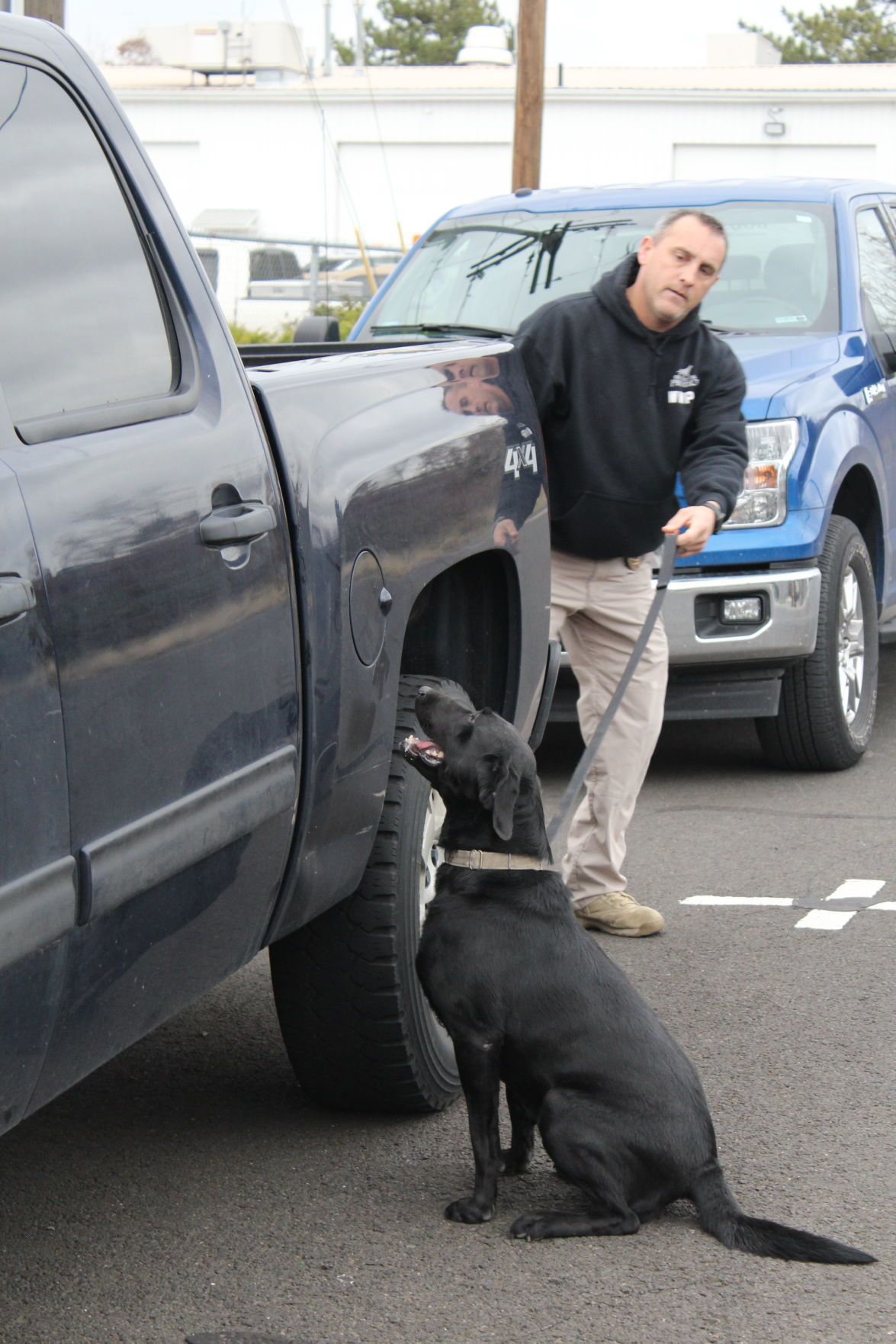 A new furry face will soon grace Walla Walla streets, as police K-9 Pick paws over her leash to 2-year-old K-9 Watts to begin sniffing around for drugs.

Born in Ireland, the English springer spaniel has been in Las Vegas under training with the Makor K-9 firm. The company teaches pups different skills, and K-9 Watts passed his test for police work, including scent detection.

Meanwhile, Walla Walla Police Officer Eric Eastman has been readying himself to handle a dog.

“Two years ago, I started working with the current handlers in preparation for when this possibility arose,” said Eastman, a four-year police department veteran.

Those handlers included Sgt. Gunner Fulmer, who will hand K-9 drug detection to Eastman sometime in May so Fulmer can focus patrol sergeant duties while K-9 Pick, a Labrador retriever, retires.

Fulmer has been a K-9 handler with the department for almost 11 years, and has had two dogs by his side.

“It is hard to step away from K-9 work as it’s been the thing I know best since I started my career in the Walla Walla Police Department,” Fulmer wrote in an email. “I had only been in the department for one year when I got selected for K-9 Rev in 2009.

“Having the opportunity to have two partners in my career (K-9 Rev and now K-9 Pick) has been the highlight of my career, he added. “I don’t feel there is a stronger bond than that of an officer and his K-9 partner.”

Fulmer recently traveled to Las Vegas, where he selected K-9 Watts from among eight scent-detection dogs. The dog was named Watts in honor of former Walla Walla Police Chief Bert Watts. He was bought with donations, including those from the Watts family, according to a release.

Before Eastman will be ready, he must complete 200 hours working with K-9 Watts, as well as pass the state Criminal Justice Training Commission certification test, he said.

“Hopefully sometime in May we’ll be able to hit the road,” Eastman said.

About that time, the duo is to have a community meet-and-greet, Sgt. Eric Knudson said. That’s if the COVID-19 pandemic that’s put a damper on gatherings relaxes its grip. A retirement celebration also may take place for K-9 Pick.

Eastman said he looks forward to his new role, but also knows expectations are high.

“Filling the shoes that Fulmer left (will be hard),” he said. “He’s knocked it out of the park as far as K-9 work.”

He also said he knew Fulmer was looking for three things in the pup: a high drive to find his toy, or the reward for finding drugs; a good nose; and sociable, lovable behavior.

“With a springer spaniel, you don’t have to worry about them biting someone,” Eastman said of the breed’s usual social behavior.

That was something not as true with German shepherd K-9 Rev, Fulmer’s first dog. He said in earlier interview the dog wasn’t so sociable at work, but was when at home.

Regardless, K-9 Rev got a lot of drugs off the streets and was missed. He was euthanized in 2018 due to medical issues — and after being retired for three years from about nine years of police work.

“Having to lay my first partner to rest was one of the hardest things in my life and took awhile to get past,” Fulmer wrote. “I think of K-9 Rev every day and the sacrifices he made to our community and often wonder how many people these K-9s have helped save from drug addiction.

“Between putting people in jail and finding large amounts of drugs that never made it to a person to use, it makes you wonder if that person got help once in jail or if someone would have overdosed on the drugs that we stopped from getting used within our community,” he added.

K-9 Pick has had her share of drug busts since her 2015 start, too, including a December 2019 find of drugs in a van suspected of involvement in a drive-by shooting and the arrest of the driver, a known gang leader.

Her retirement will include “relaxation and being spoiled by the Fulmer family,” according to a release.

But Fulmer doesn’t plan to retire for another five or six years, he said, and wasn’t fully stepping away from K-9 work. He said he’s a certified official and trainer for the Pacific Northwest Police Detection Dog Association (PNWK9), which helps train detection dogs in Washington, Idaho, Oregon and Montana.

“I will get to continue to work with dogs and handlers through that organization, which makes me happy,” he wrote. “So although I am hanging up the leash with the Walla Walla Police Department, I still get to help train our K-9s and other K-9s and handlers within our region.”