Sign Up
Log In
Purchase a Subscription
You are the owner of this article.
Edit Article Add New Article
Home
NEWS
SPORTS
THINGS TO DO
OPINIONS
CLASSIFIEDS
PRINT REPLICA
LIFESTYLES
VISITOR GUIDE
PHOTOS
1 of 9 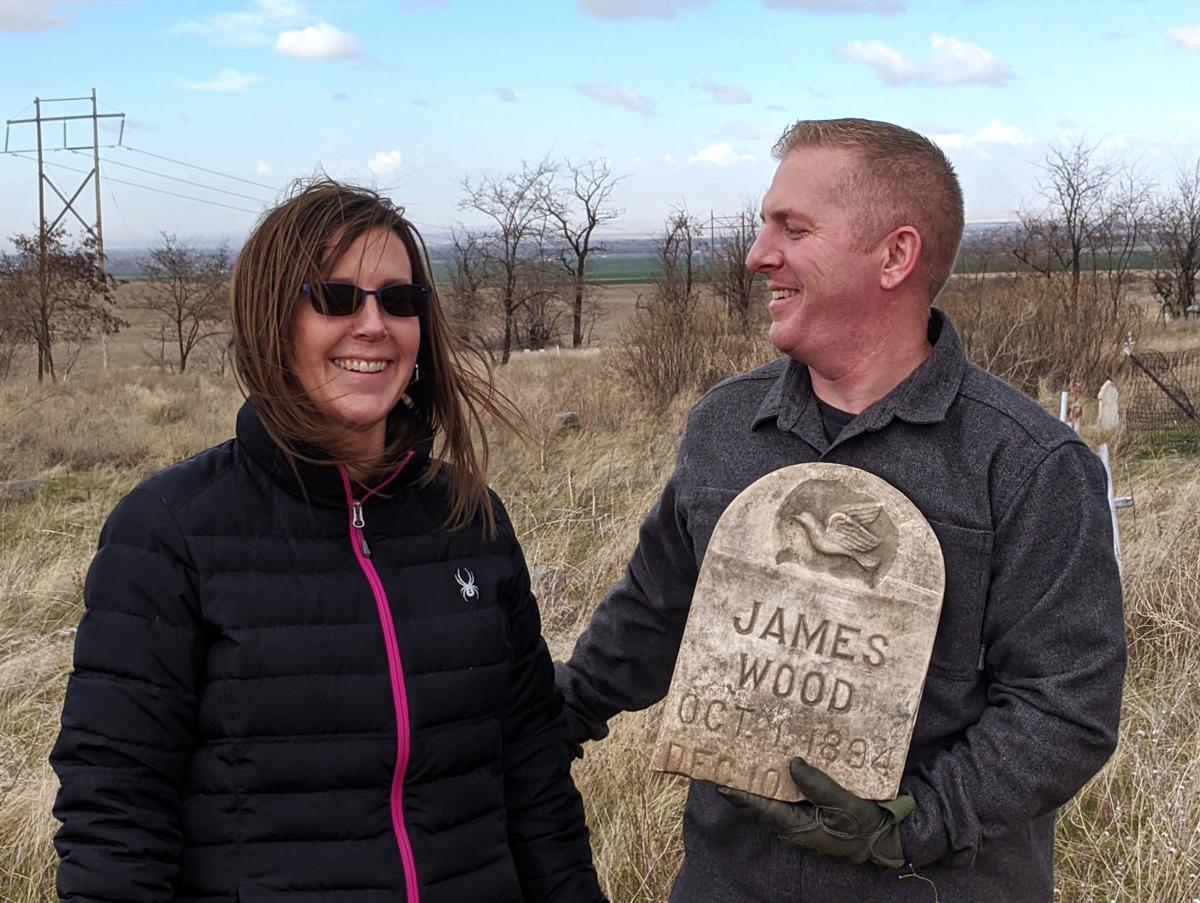 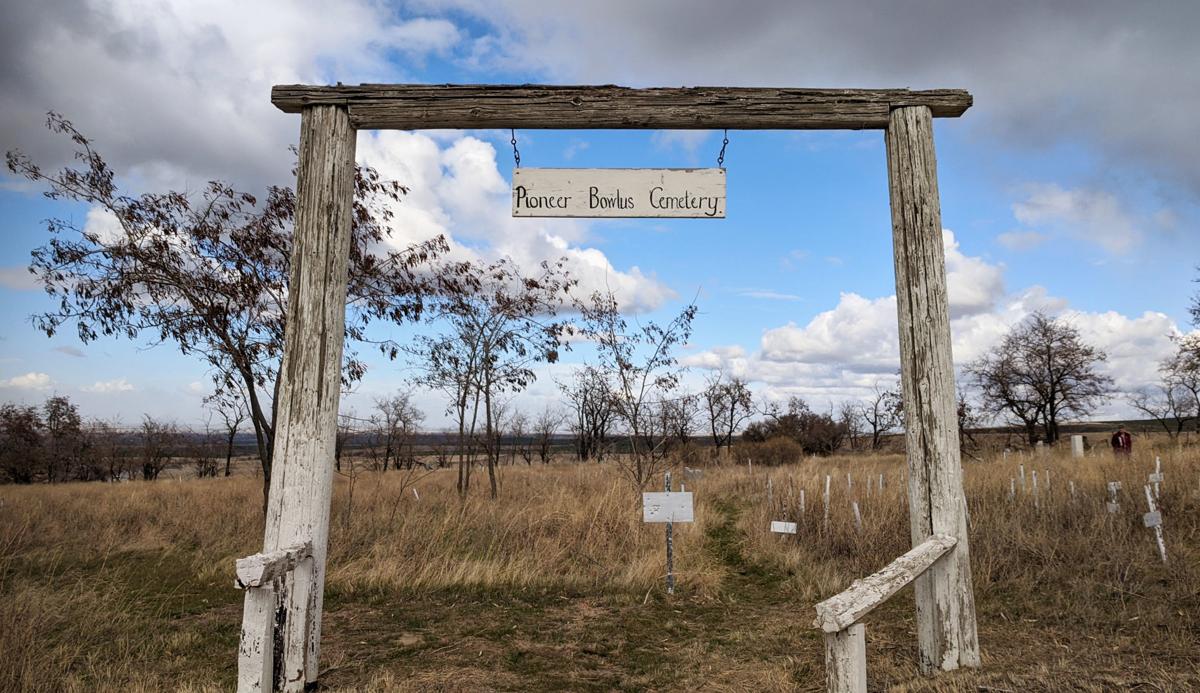 The entrance to Bowlus Cemetery in rural Umatilla County.

Kat Ferguson (left) and Steven McDaniel search for the grave of James Wood. 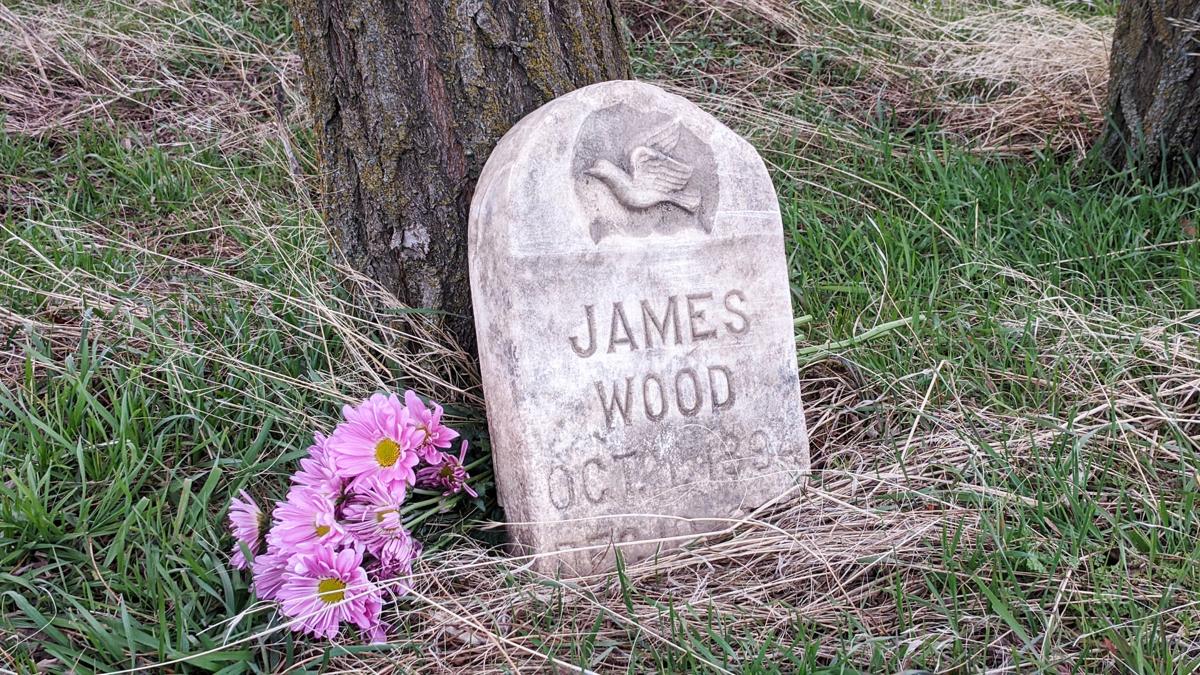 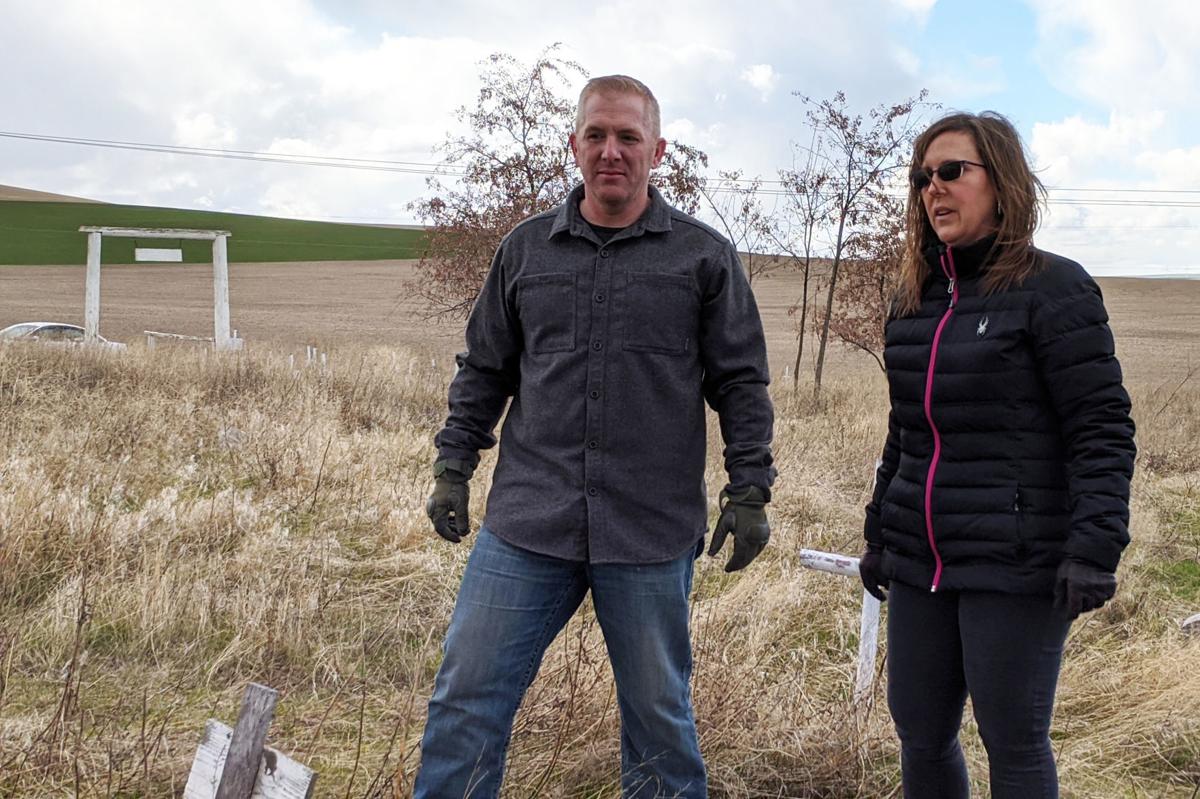 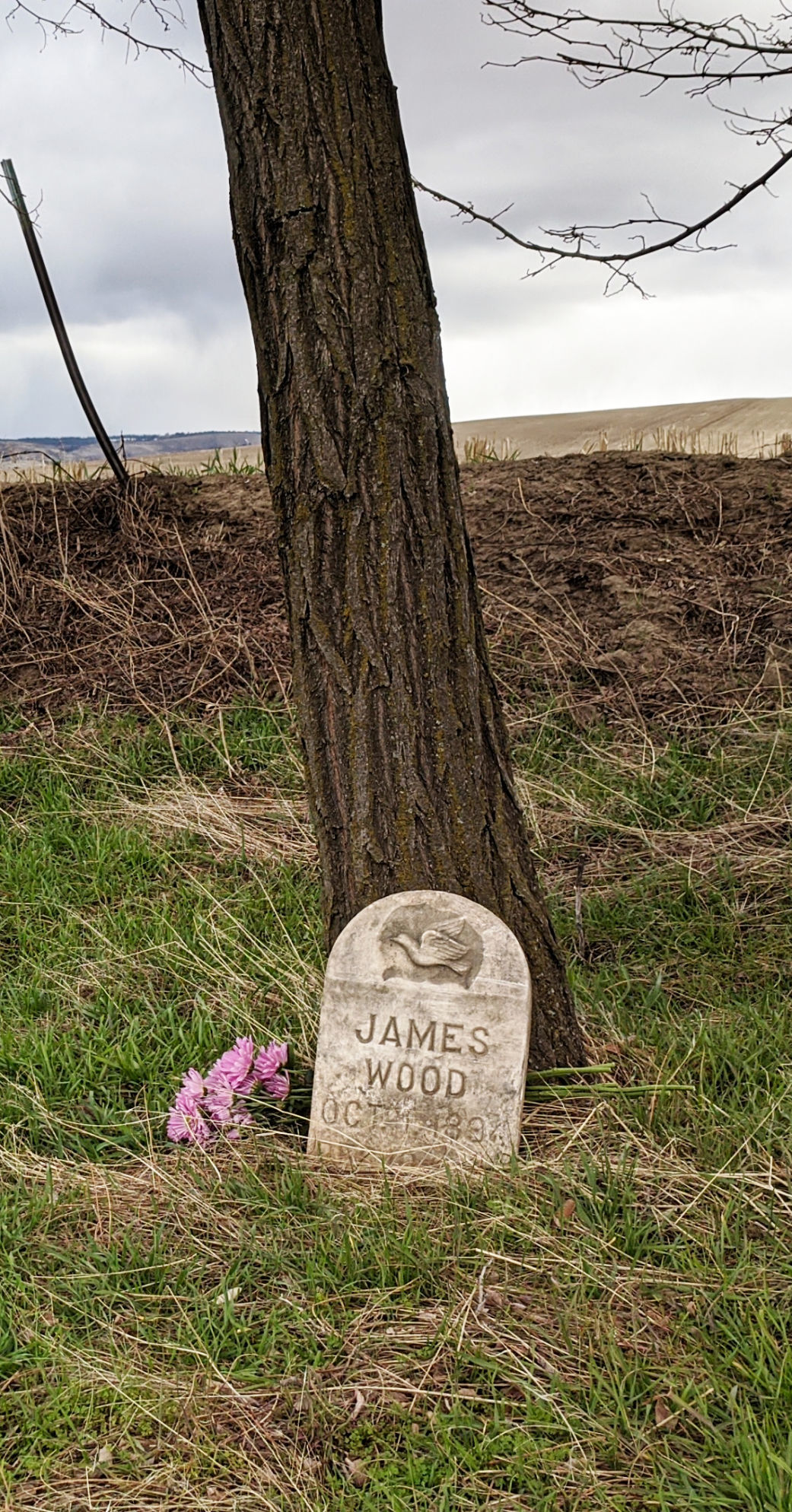 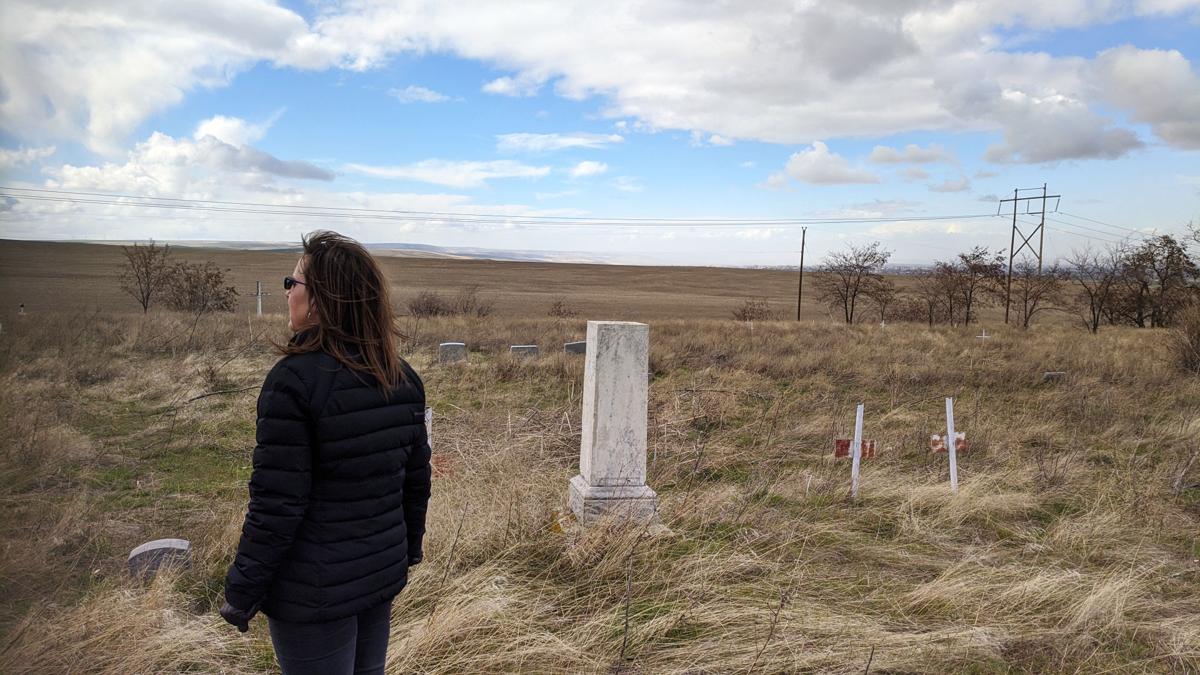 Kat Ferguson searches for the grave of James Wood. 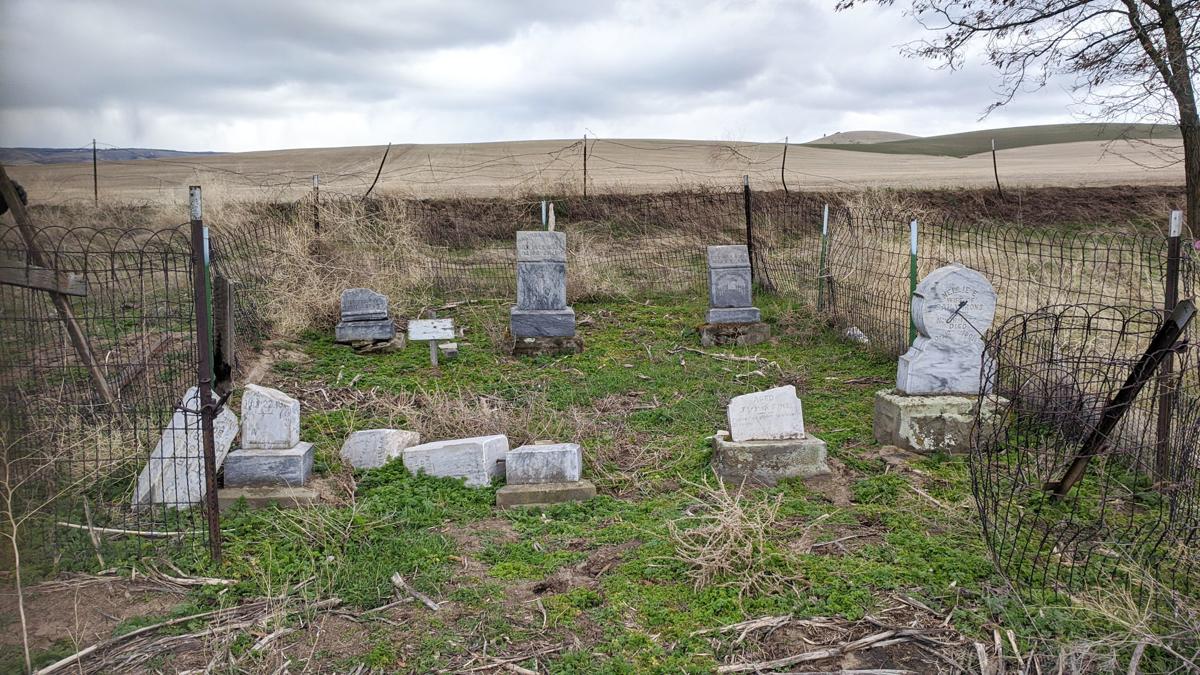 Much of Bowlus Cemetery has unfortunately fallen into neglect.

The entrance to Bowlus Cemetery in rural Umatilla County.

Kat Ferguson (left) and Steven McDaniel search for the grave of James Wood.

Kat Ferguson searches for the grave of James Wood.

Much of Bowlus Cemetery has unfortunately fallen into neglect.

MILTON-FREEWATER — On a hill above the Walla Walla Valley in rural Umatilla County is an old pioneer graveyard — Bowlus Cemetery.

It’s not glamorous or pristine. Quite the opposite, in fact.

Tangled weeds sprawl across the patch of ground that you would mistake for an unkempt corner of a random farm field were it not for a few well-kept grave sites and a quaint sign on an old wooden gate that reads “Pioneer Bowlus Cemetery.”

It sits in “the middle of nowhere” just off County Road 525, about four to five mile east of Milton-Freewater.

A few of the graves have been well maintained throughout the years, but most have fallen into decay.

Metal pipes and wooden planks mark most of the plots. In some cases, large rocks were used instead of gravestones. Many of the larger monuments have been toppled, either by time or hooligans — either case is just as likely.

On Saturday afternoon, a trio of people found themselves rummaging through the weeds of this rugged cemetery, searching for one particular grave site. Their goal was to pay respect to a young boy who was buried there long ago.

What brought them together was an odd turn of events that came to a sort of conclusion Saturday, but it is a mystery nevertheless.

The mystery began about a year ago when Kat Ferguson, an archaeologist on staff at Walla Walla’s Jonathan M. Wainwright Memorial VA Medical Center, was made aware of something that had been found by staff members on the property.

A headstone, bearing the name of one James Wood, had been tossed over the fence unceremoniously and onto the VA grounds.

Doug Jones, a detective for the VA, held onto it for a while, but he decided to give the piece of history to someone on staff who handled history.

Ferguson, who manages the VA’s cultural resources program, seemed a natural fit to help solve the mystery of where the headstone came from and how to return it.

Upon examining the stone, something stranger than fiction struck Ferguson — she shared the same birthday as young James.

Was this just a coincidence or something more?

“That has crossed my mind,” Ferguson said two days before she went out to the cemetery. “There may have been some reach from beyond — I don’t know.”

The birthdate was clearly marked Oct. 1, 1894. Ferguson was also born on an Oct. 1 in the following century.

Ferguson researched the headstone more and found that James Wood died a short time later on Dec. 10, 1895. Ferguson also found that he had no relatives buried at the cemetery.

“The poor little guy, he was only about a year and three months when he passed,” Ferguson said. “Wood is a fairly prominent name in the College Place area, but I’m not sure where that tie is or if there is one … The history shows his parents left after he passed away.”

Many of the markers in pioneer-age cemeteries show the same unfortunate circumstances. Rows and rows of graves simply marked “infant” or “baby” are common at Bowlus Cemetery. A somber reminder that medical care has progressed massively in the past century.

After finding the location of the grave where the headstone came from, thanks to findagrave.com and some other research, Ferguson went about trying to find the owners of the cemetery so she could return the item.

The Bowlus family farmed many fields after coming out to the region in mid-1800s, Ferguson said. The plot belonged to the family before, but the fields currently surrounding the cemetery are owned by others.

After no success, Ferguson decided to recruit some help.

She dialed up the Umatilla County Sheriff’s Office, being that the cemetery is not far from Milton-Freewater on the Oregon side of the border.

Deputy Steven McDaniel took her call and he began reaching out to the community to find somebody who could claim ownership of the cemetery.

“Typically, this would be handled by Walla Walla, since it was found in Washington,” McDaniel said. But the Sheriff’s Office decided to lend a hand anyway, he said.

The community responded quickly, and eventually Francis Weddle, a matriarch of the Bowlus family, came forward and requested that the headstone be returned to the cemetery, either to its exact location or somewhere fitting, Ferguson said.

By the time the weekend arrived, Ferguson, McDaniel and Linda Wondra, the VA’s public affairs officer, decided to go out and personally find the resting of place of young James.

“We naturally feel responsible,” Ferguson said after she and McDaniel became invested in the mystery.

Sharp, cold wind ripped across the late winter landscape at Bowlus Cemetery on Saturday as Ferguson, McDaniel and Wondra tried to find the buried base of the headstone.

As far as final resting places go, it has seen better days. A caretaker used to tend to the facility, but those days are clearly over.

On one corner of the property was a dead dog, likely intentionally put down perhaps within 24 hours of their arrival, McDaniel posited. An ominous sign.

The crew worked around every corner of the property, conscientiously detecting the derelict grave sites. The pathways zig-zagging around the location are likely more maintained by deer than people these days.

Still, the party pressed on, no matter the condition of James’ plot.

After a long while of searching, it became clear that finding the buried second half of his headstone would take more archaeological work, not particularly prudent work in a graveyard.

Instead, Ferguson picked a spot up at the top of the cemetery, away from the vandalized markers, isolated under a small canopy of trees. She rested the marker against a tree and placed a small bouquet of flowers.

A final goodbye for a little boy who certainly would have been lost and forgotten otherwise.

McDaniel theorized that the headstone was stolen by vandals for one reason or another and placed at the VA perhaps as a last-ditch effort to maintain some sense of dignity.

Or perhaps the grave marker of James Wood came to them by fate or destiny, Ferguson wondered.

“Maybe there is something to that, who knows?” Ferguson said. “Stranger things, right?”

The reason for the headstone’s appearance at the VA likely will never be known.

All that’s known now is that James Wood is no longer forgotten.

On a hill above the Walla Walla Valley, in rural Umatilla County, is the grave of one James Wood.