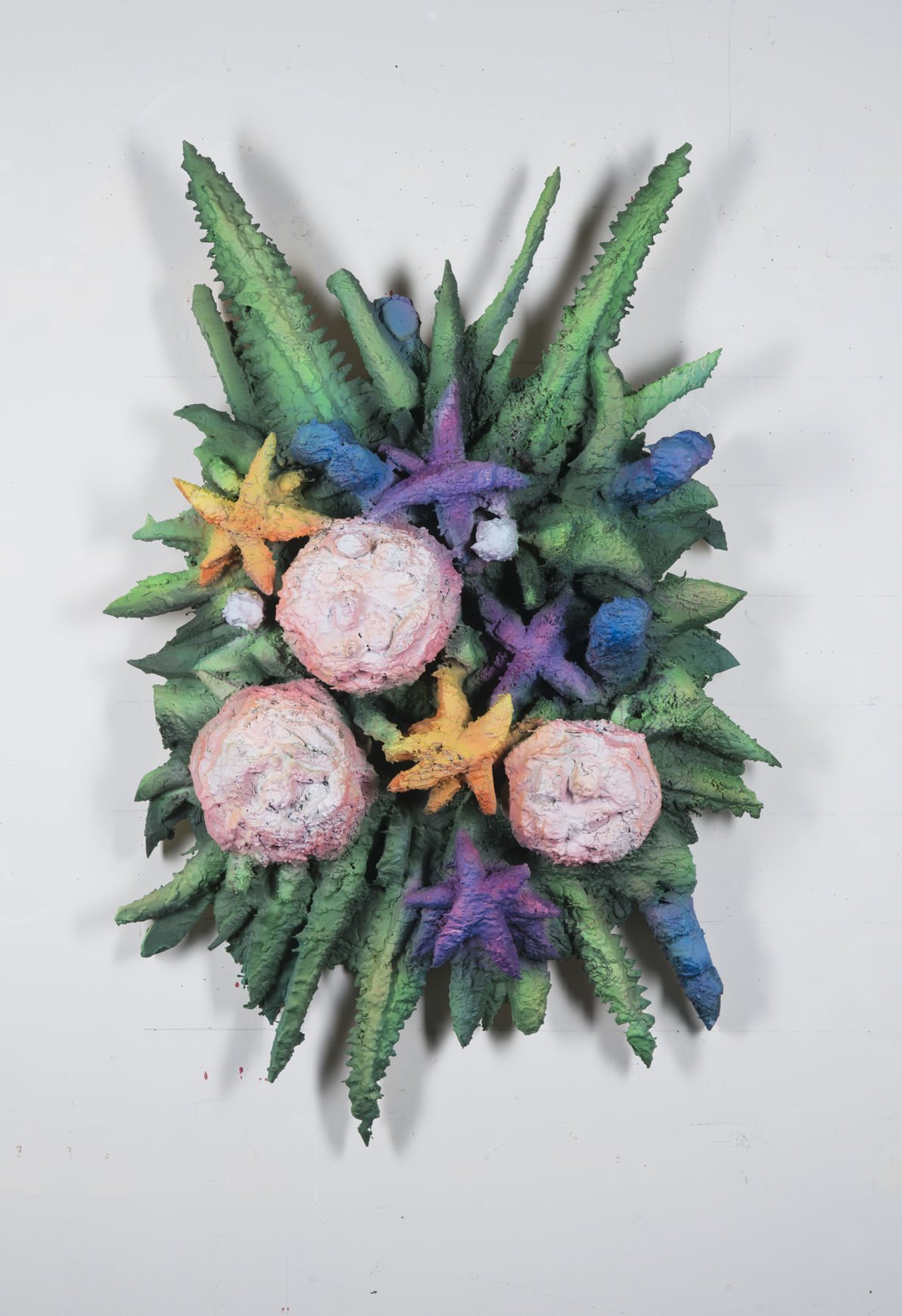 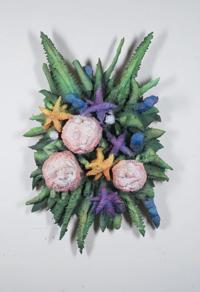 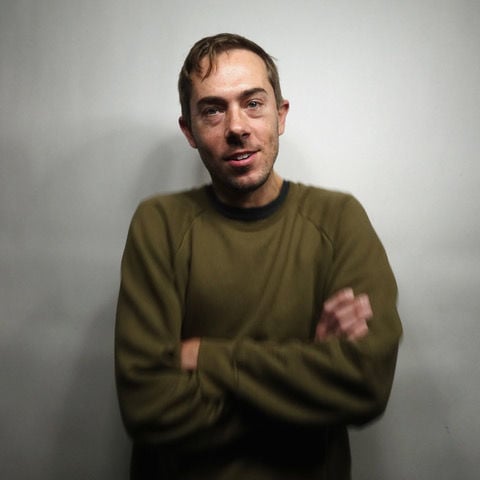 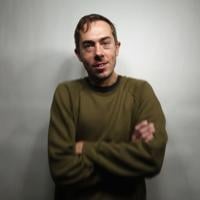 Kevin Stahl’s show, amongst a discourse on isolation and death, is of Funeral Sprays. His own. Kevin has cystic fibrosis, a mortal illness.

Kevin Stahl’s show, amongst a discourse on isolation and death, is of Funeral Sprays. His own. Kevin has cystic fibrosis, a mortal illness.

The weight of responsibility for the following day swayed the men’s bodies. They had just rehearsed for the Mark Anderson celebration of life in Cordiner Hall at Whitman College.

In 1999, we were the youth — beautiful dirty art kids back then before life had its way with us.

Now, with much less hair, Ian Boyden, Squire Broel and Dylan animated themselves as they always had.

Byron Peterson-Huff walked past on his way into the night with a smile and a “Hi, Gus.”

Lisa, Jay and Kelsee Anderson circled to greet me. Patty, dear Patty, was not to be seen.

We discussed the articles, obituary, the coming of friends, clients and family in the fog, all the somber bits.

Then Jay sprung his head up toward me.

“Have you seen the show at Foundry Vineyards?”

I was taken back. My tongue was still stuck in the reasons why not, when Jay began to explain his excitement.

Now here is the thing you need to know. Each of us has our origin stories, and all of them intertwined in Mark’s dreams and doings.

We all had our parts to play and by Saturday night, eating was something we had forgotten to do.

The last event had donations from Whitehouse-Crawford, Saffron, TMACS and Passatempo.

While in line, I was introduced to Jay’s best friend and artist of the show and the reason for his break from the somber.

Stahl’s show, amongst a discourse on isolation and death, is of Funeral Sprays. His own. Kevin has cystic fibrosis, a mortal illness. He explained to me, over plates of food, that death will come from “infections after infections that destroy the lungs.”

This show graces Foundry Vineyard’s fall release bottles, and according to Jay, was years in the making.

To read the press release, written Oct. 16, a few days before Mark’s 65th birthday and a month before his untimely death, is a foreshadowing that is not to be believed.

“The show is comprised of three bodies of work — floral spray sculptures, paintings of night and a life-size human snare trap.

“The combination of these works together is intended to serve as a funeral, though for what or for whom is left ambiguous.”

Jay had promised to teach him how to melt lead. When Kevin came for his yearly visit from New York City, a hunting trip called Jay away.

Instead, Mark Anderson stepped in to teach Kevin how to melt lead.

Kevin learned what he needed to cover the funeral sprays for both of their funerals.

There is an etiquette to celebrating the dead and it gives space to watch a life’s pattern. Mark had done that for all of us, and many more.

He had a hand in the making. He asked us to come, to be here, to work with him.

He said yes to our endeavors. He laughed, oh did he laugh. He even had a hand in the art of his own funeral.

The following are comments from Kevin on the Memorial for Mark

“Mark Anderson’s passing dramatically changes the context of the work presented in my exhibition, ‘I’d Rather Sink!!’

“My sculptures that were hung on the walls of Foundry Vineyards’ gallery as art when the exhibition opened a month ago are now functional objects and mementos that pay tribute to Mark’s impactful life.

“For this to be the art exhibition presented at Foundry Vineyards synchronous with Mark’s passing feels uncanny and predestinate.

“I’m honored to have had the opportunity to show these works at Foundry Vineyards, for Mark to have seen these works completed, and for my sculptures to be forever linked to Mark’s memory.

“The gallery at Foundry Vineyards is no longer host to my exhibition; it has transformed into a memorial to his legacy.

“All of the flowers and tokens sent to the Anderson family are being brought to the gallery to be placed with my sculptures and Mark’s memorial box.

“We welcome ALL whose lives Mark has touched to visit Foundry Vineyards to pay their respects and to add anything to the space.

“It can be more flowers, but it can also be art, a dance, a song, a poem, a prayer or a story.

“Mark’s love of creativity was boundless. We invite you to use this heartache as a creative force to bring healing and inspiration to yourself and others.”

How does fear play a role in your work? Fear of failure, fear of wasting time, fear of wasting money. Confidence, time and cash are things I’m always trying to increase so I tend to white knuckle what I’ve got. Then I fear I’m worrying too much about losing those things.

Titled work or untitled? I like to title works and I like to use the same title over and over again. I prefer to make work in serial. So much is learned while making an artwork and after it’s made that I want and need to make more of them. I’ll usually title all the works from the series the same thing. Sometimes I’ll add another simple title, usually a single word, parenthetically to differentiate them.

Art school or no art school? After being an undergraduate fine art major and getting an MFA, I believe the answer is no art school. Would I have the same opinion had I not spent seven years in art school? Probably not.

What is your favorite place in Walla Walla County. What do you hear, taste and smell there? The foothills of the Blue Mountains, just outside of town, on Reser Road. I hear the sound of an engine and the wind on my ears. I smell gas and oil and sometimes grass. I’m too busy smiling to taste.

Talk about a connecting thread that spans throughout your work. Mortality is at the core of practically everything I’ve ever made … it’s always there.

What is your best mistake? Getting my master of fine arts. I realize now that, career wise, it was a waste of time. Both during the two-year program and then for years after, trying to break the habits in ways of thinking I developed in school. However, through that choice I met a few people that will be with me for the rest of my life, including my wife.

What is your favorite tool? How do you use it? My table top Ryobi band saw. It’s cheap and disobedient and I punish it for being so, but it’s become essential in sketching my ideas.

What are your necessities to be successful? Confidence and good health.

Were you sickly or isolated when you were young? I was born with cystic fibrosis to an overprotective mother at a time when the treatments available to control the disease’s symptoms were lacking. I spent a lot of time in hospitals drawing and watching NBA games on TV. Throughout elementary school, for much of the year, I wasn’t allowed to go outside on recess. I had to sit inside while everyone played in the snow. Being an “indoor kid” is something I’m still rebelling against.

Do you have any advice? If you don’t have one, get a dog. Really any dog will do.

“I don’t care! I’d rather sink!” Kevin Stahl is the FV fall release artist at Foundry Vineyards, 111 Abadie St. The show is on view until Jan. 20. Gallery hours are 11 a.m.-5 p.m. Thursday-Sunday and by appointment Monday and Wednesday.