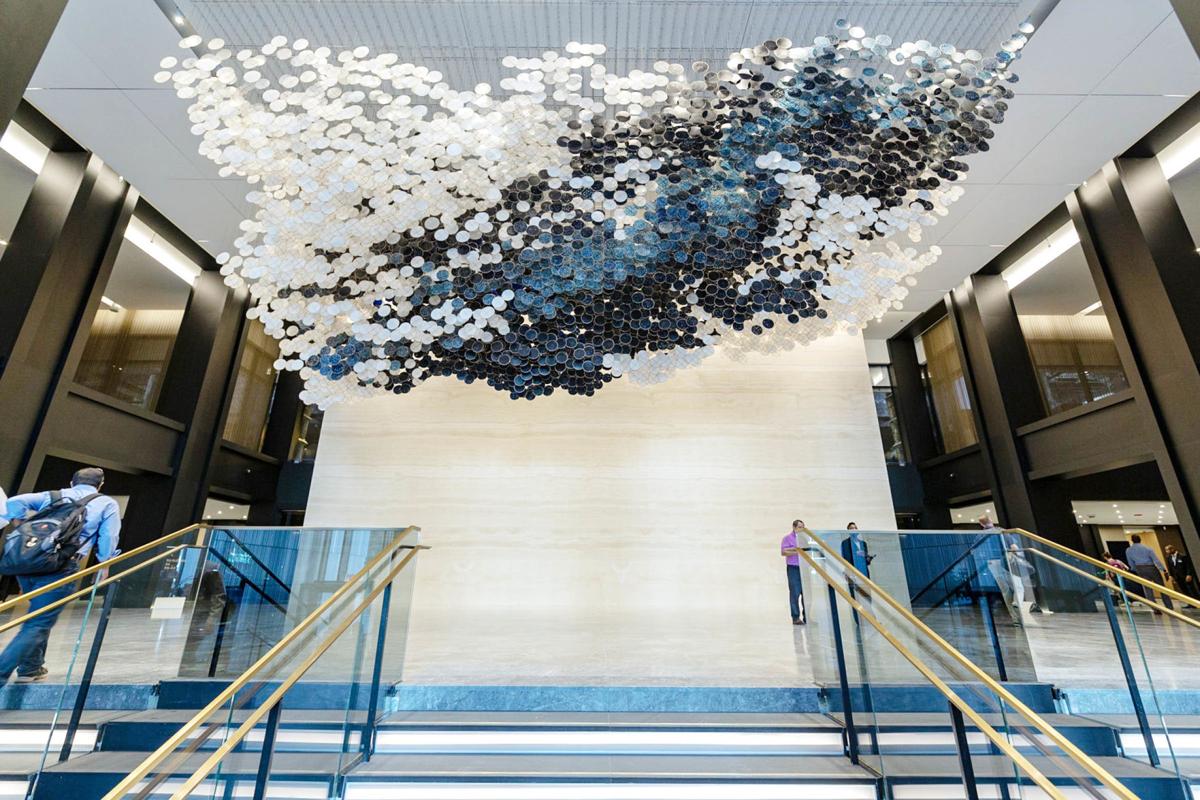 Jacob Hashimoto's ‘In the Heart of this Infinite Particle of Galactic Dust, 2019’ installation in totality in the Wacker Drive lobby entrance. 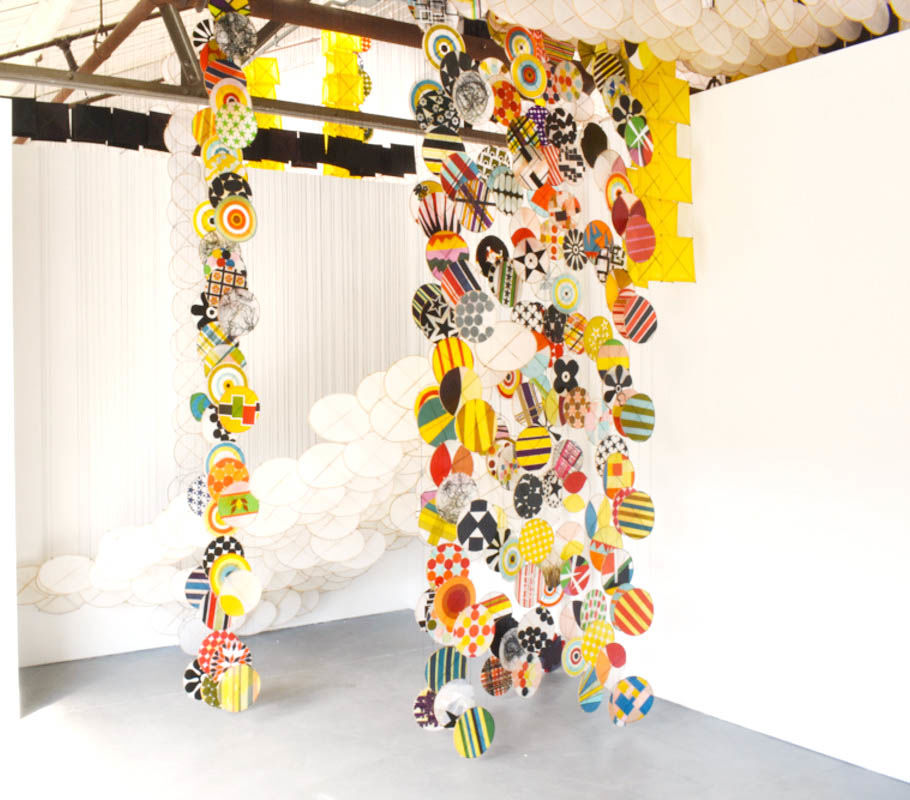 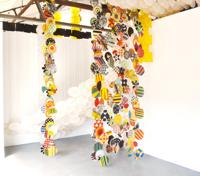 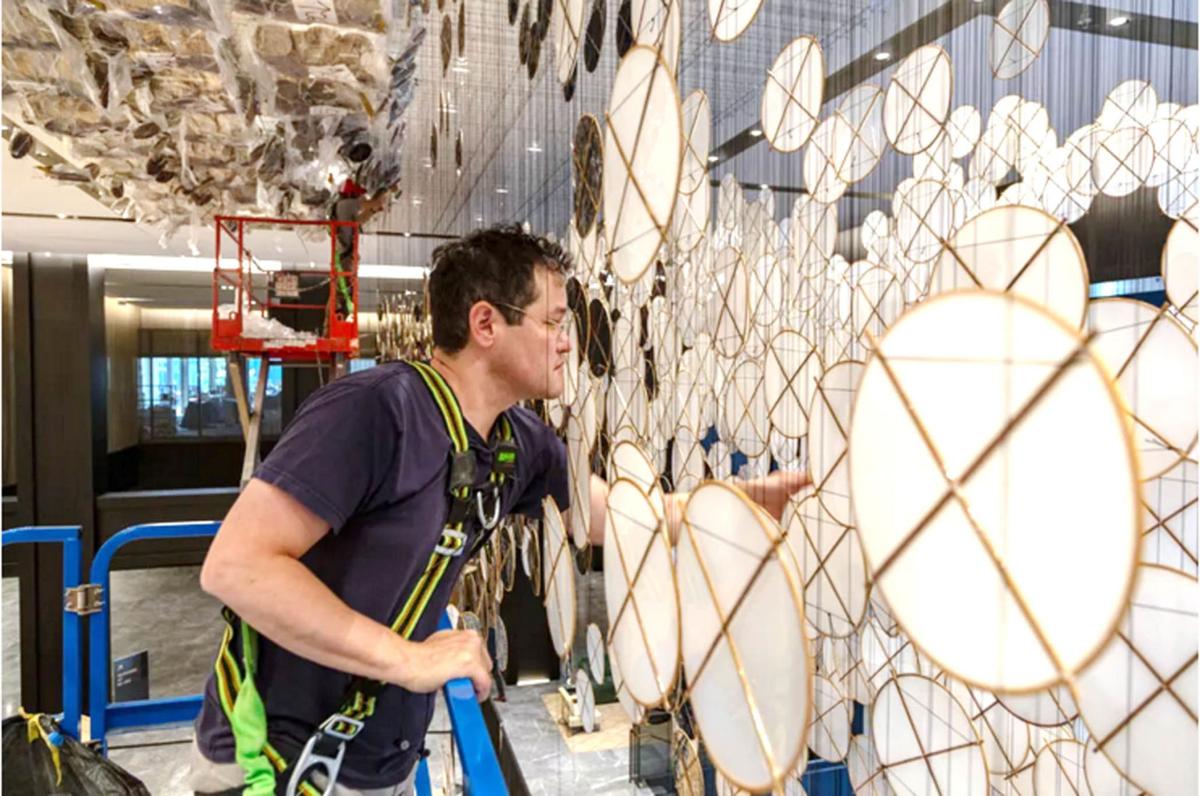 Jacob Hashimoto works on the installation in Chicago’s Willis Tower of “In the Heart of this Infinite Particle of Galactic Dust, 2019,” a 16-foot-tall, 42-foot-wide cloud. 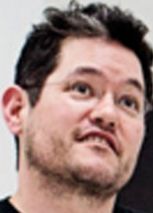 Jacob Hashimoto's ‘In the Heart of this Infinite Particle of Galactic Dust, 2019’ installation in totality in the Wacker Drive lobby entrance.

Jacob Hashimoto works on the installation in Chicago’s Willis Tower of “In the Heart of this Infinite Particle of Galactic Dust, 2019,” a 16-foot-tall, 42-foot-wide cloud.

Jake’s undulating, cloudlike work is made of 7,000 disks suspended by different lengths of string from the ceiling.

An article Elise Shapiro wrote in Work Design Magazine notes the Willis Tower lobbies are being transformed to be “interactive, energized spaces that inspire curiosity for tenants and set the tone for the rest of the workplace experience.”

Completed in 1973, the Willis Tower, originally the Sears Tower, at 1,450 feet is currently the 23rd tallest building in the world.

“The dramatic work of art from Jacob Hashimoto will be a treasure for our building, a celebration of the city, and an embrace of the new neighborhood we’ve built at the Tower,” according to David Moore with EQ Office.

Jacob said in WDM “The circles and method of fabrication of ‘In the Heart of this Infinite Particle of Galactic Dust, 2019’ came to be by utilizing artistic and logistical challenges using the circles, mark making tools, and other design elements in order to ‘paint with these objects in space.’ Knowing how materials behave, and their unique characteristics, helps me work fluidly and with familiarity. There is infinite possibility using these tools to explore.”

With Rhino 3D he developed a buildable model viewable on big monitors. “This is the closest thing we can do to building the actual installation. For projects of this scale, it is critical to use computer-generated drawings and models, though old school schematic drawings can work for smaller projects.”

Nine-inch individual kite disks make up “In the Heart of this Infinite Particle of Galactic Dust, 2019,” a 16-foot-tall, 42-foot-wide cloud.

“The disks are strategically positioned to create the effect of a cloudlike, faceted mass. The kites appear to be undulating throughout the space by using varying lengths of string, and the graphics are printed on paper that is embedded into resin to create a stained glasslike disc that allows light to permeate.”

When EQ Office selected Jacob to create the statement installation for the revitalized Wacker Drive lobby entrance in Willis Tower, the assignment brought him back to Chicago where he earned his bachelor of fine arts degree at the School of the Art Institute of Chicago.

Jacob lives and works in Queens, N.Y. See jacobhashimoto.com/ for images of his vast body of work on exhibit internationally in museums, galleries and other public collections.

Closer to home, his “When Nothing Ends, Nothing Remains” was permanently installed in 2016 in the atrium at Penrose Library on the Whitman College campus. His “Gas Giant Fragments and Silence” was temporarily displayed on campus in Sheehan Gallery that year.

The Whitman Wire reported Jake’s work taps into traditional Japanese art. “He uses what he calls ‘kites’ made of rice paper printed in plain colors or patterns framed with bamboo. Hashimoto then creates sculptures by hanging the kites at various lengths.” For durability, hard, shiny resin coats the kites in the work at Penrose.

Elizabeth is a professor and teacher at Loyola University Chicago in the criminal justice department. Luke is a book editor. Their family moved to Chicago from Brooklyn a year ago, according to her parents, Jonathan and Melissa Webster of Walla Walla.

Elizabeth and Jake grew up near one another, attended Green Park School and graduated from Walla Walla High School. They’ve managed to get together in Walla Walla and New York City, Melissa said. Jake’s parents are retired Whitman English professor Irv “Hash” and Marianne Hashimoto.