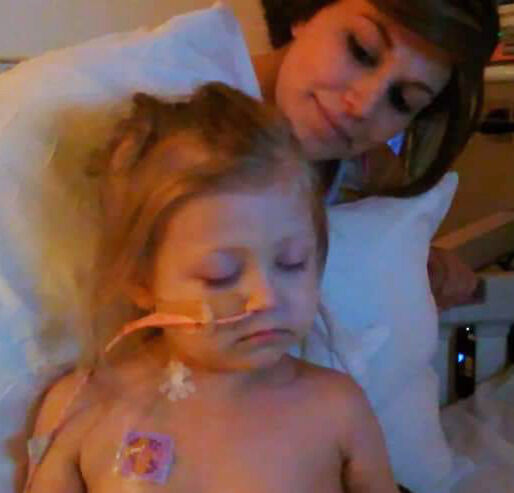 Emma Baker-Winkler, 3, with her mother, Tyna Baker. Emma was diagnosed with acute lymphoblastic leukemia in 2016, the same year Tyna died of the same disease. 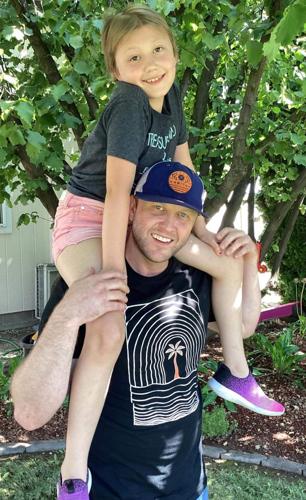 Emma Baker-Winkler, 9, and her father, Bruce Winkler, live in Athena. 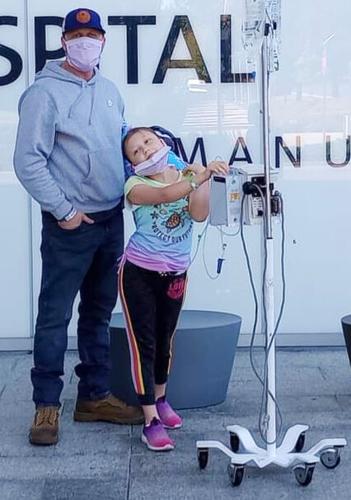 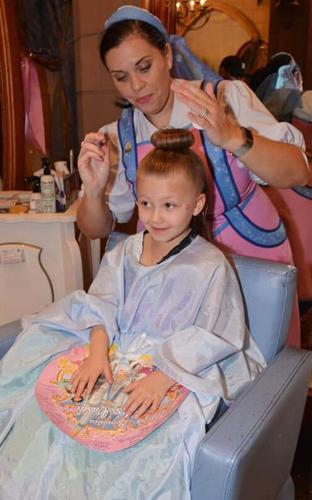 Emma Baker-Winkler, 3, and her family went to Disney World, courtesy of Make A Wish. 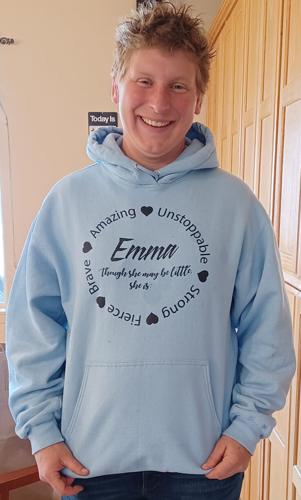 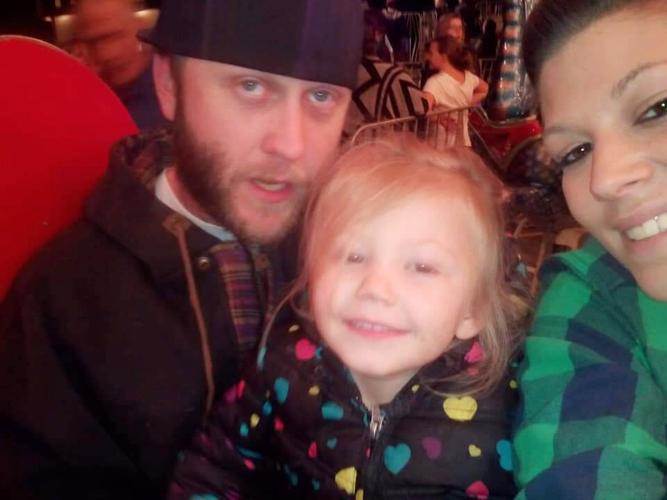 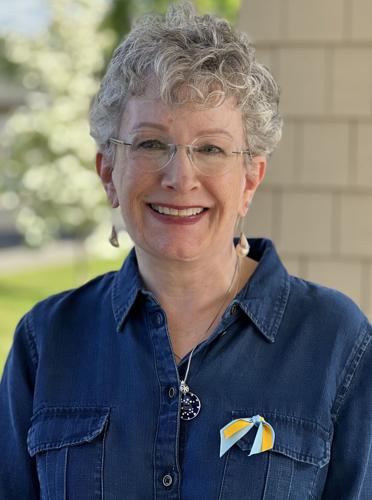 Emma Baker-Winkler, 3, with her mother, Tyna Baker. Emma was diagnosed with acute lymphoblastic leukemia in 2016, the same year Tyna died of the same disease.

Emma Baker-Winkler, 9, and her father, Bruce Winkler, live in Athena.

Emma Baker-Winkler, 3, and her family went to Disney World, courtesy of Make A Wish.

She had pictured her father, Bruce Winkler, being gifted a new pickup truck on the occasion of his 37th birthday on Aug. 20.

With maybe a week’s notice, not enough money was raised, although three donations of $100 each came in.

Emma hopes a car dealership could sponsor and gift the truck to her dad, who drives her from their home in Athena to Portland (456 miles round trip) two to three times per month to connect her with treatments for her second bout of acute lymphoblastic leukemia.

“Emma … worked hard all week to try to get her dad this special birthday present,” said Winkler’s girlfriend, Shellie Schoonover, the day before Winkler’s birthday. On the big day, they treated Winkler to a nice dinner and special cake.

“The truck might have the logos of the businesses involved because as much as Bruce drives, it will be seen by many,” Schoonover said of the imagined gift.

With access to a reliable working vehicle, “Emma’s battle through chemotherapy treatment for the next two years will be more comfortable, and Bruce’s spirits will be lifted to a level he hasn’t reached since Emma and her mom were both diagnosed with leukemia seven years ago,” Schoonover said.

The family had been dealt a tremendous double blow. Bruce’s fiancee, Tyna Baker, was already fighting another relapse with cancer when Emma was first diagnosed with acute lymphoblastic leukemia at age 3.

Then, “Emma was life flighted to Portland from St. Mary (Medical Center) on Nov. 16, 2021, when we found out she had relapsed,” Schoonover said.

Family friend Morgan Matteson posted on Feb. 9 on Facebook, that “Finances are tight for sweet Emma and her father Bruce Winkler. I know that when I went through my tough cancer year, it made the world of a difference to have a team of individuals who would wear their shirts and then send me pictures.”

“I knew I was being prayed for and thought of,” Matteson said. “I know this would make the world of a difference to Emma and Bruce as well. Emma has a long road of treatments, and medical appointments. I’m told that she has 36 months of treatment ahead.”

Matteson, who is executive director/PATH international instructor at Dream Catcher Therapeutic Riding Center where Emma rides horses in Pendleton, has been selling Team Emma T-shirts and sweatshirts since early February to help raise funds for her treatment.

KATU News on Oct. 24, 2016, ran a story about Emma and Tyna, the latter who faced her first leukemia diagnosis at age 13. After a long remission, the cancer returned in 2016 when Tyna was 26.

“Baker’s worst fear was that the family history of leukemia would find its way to Emma. Earlier this year, the adorable, little blond girl (then 3) was diagnosed.”

“Suddenly, Bruce Winkler had to cope with both his fiancé and daughter battling the same disease,” KATU reported.

“I never thought in my wildest dreams I’d be going through this,” said Winkler. “One of them is one thing, but both of them is unbearable, really.”

Even then their car was on its last legs, and the cost of fuel was almost prohibitive.

KATU reported, “Little Emma still faces years of harsh treatment, but Baker and Winkler say her doctors are optimistic about her eventual outcome.”

The doctors at OHSU told Baker they could do nothing more for her, and she died Dec. 18, 2016.

These days, Bruce “isn’t able to work much at all because he takes care of Emma. He had established a small business here in Walla Walla just before everything happened in 2016. He was a partner in the business Glassography,” Schoonover said.

Winkler has deep roots in Eastern Oregon. He is from Athena and Pendleton. His great-grandparents farmed in Athena on Tubbs Ranch, and an uncle farms out of Adams as owner of Berk Davis Ranch/B.L. Davis Ranches.

Emma, who will be a fourth-grader this fall, attended Athena Elementary before the COVID-19 pandemic and her relapse. Her mom graduated from Helix High School, and her dad attended Pendleton High School until late in his senior year. He finished his diploma at Blue Mountain Community College that year.

Winkler is driving a Toyota Tacoma with 350,000 miles on it. “It’s on its last leg. It’s loud on the highway. The passenger window doesn’t roll down. There is a small backseat that we squeeze a car seat for Ember, my 2-year-old, plus two more of us in the back. There are only four seat belts and five of us. There are minor repairs needed often. The frame is in bad condition,” Schoonover said.

She sold her Toyota Tundra soon after Emma relapsed to pay for trips to Portland during the first phase of treatment. “I would take my Honda Accord, but I sold it last month to pay bills. It was falling apart anyway,” she said.

Winkler takes on lawn care jobs when he can fit them in his caregiving schedule, Schoonover said.

She said Emma is doing well and is in remission, although treatment two to three times per month is required in Portland at Randall Children’s Hospital.

“We still have a long road ahead with a treatment end-date being Nov. 19, 2023. Treatments include dozens of spinal taps or lumbar punctures. Many rounds of IV chemotherapy and steroids as well as daily oral chemotherapy and more are prescribed,” she said.

In fact, Emma returned to Portland as recently as Aug. 23 for another round of chemo. The family left Athena at 4 a.m. to make their 9 a.m. appointment, Schoonover said. She is doing OK, Schoonover added, after they returned home on Aug. 26. They’ll be back in Portland for more chemo in two weeks.

“We are grateful for everyone who has been supportive along this journey,” she said.

Annie Charnley Eveland is retired from the Union-Bulletin as a 42-year newspaper editor, columnist and journalist. A freelance writer, she produces the Etcetera column in the U-B. Send news with contact name and daytime phone number to acereporter1979@gmail.com or call 509-386-7369.

Bruce Winkler opened an Emma Baker-Winkler account at Banner Bank branches or make contributions through Venmo using @drudown85. Checks may be sent to Winkler at PO Box 52, Athena, OR 97813, or call Shellie Schoonover at 541-969-5231 for details.

Additionally, the family has found support from Athena Christian Church and through donation jars stationed around Athena and Pendleton.

Etcetera: A tale of two clocks struck by trucks