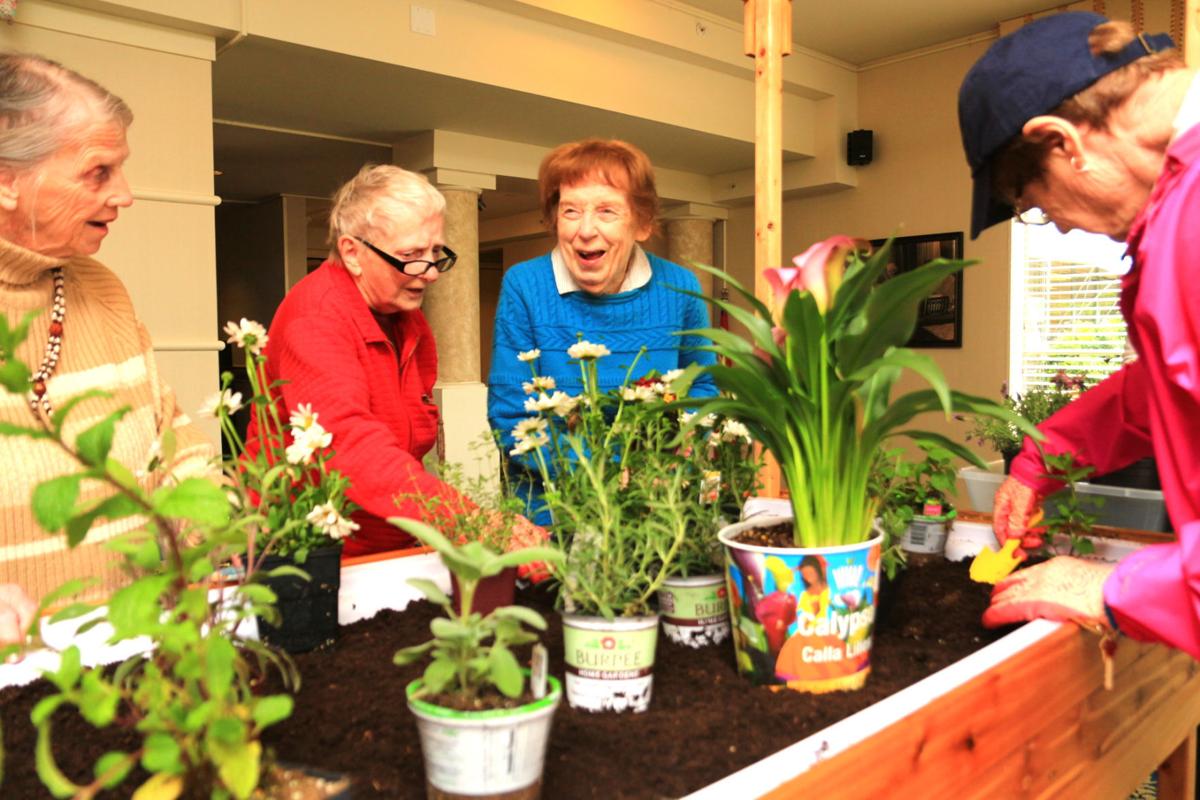 An Eldergrow garden is scrutinized at a Garden Design Kickoff event. 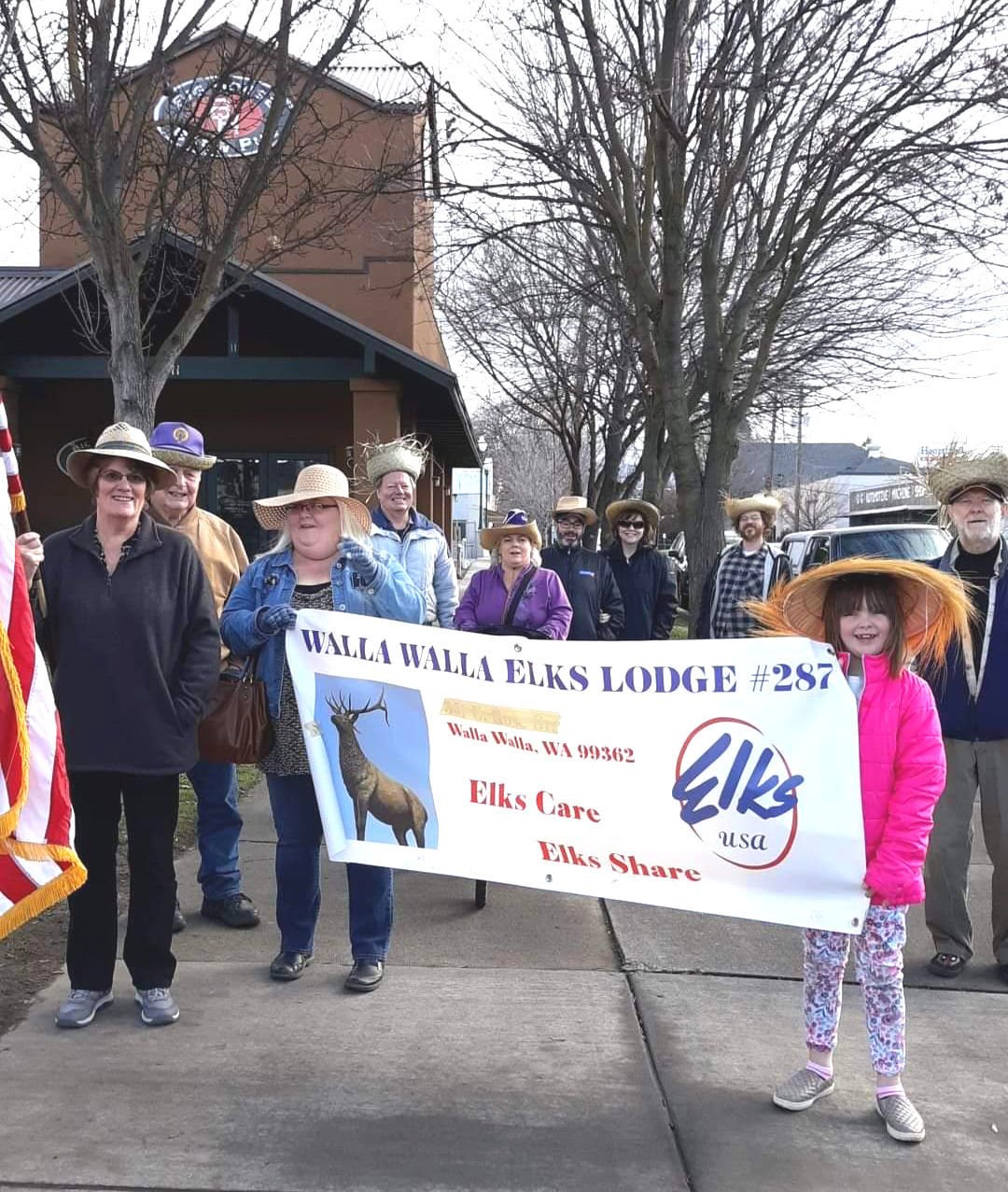 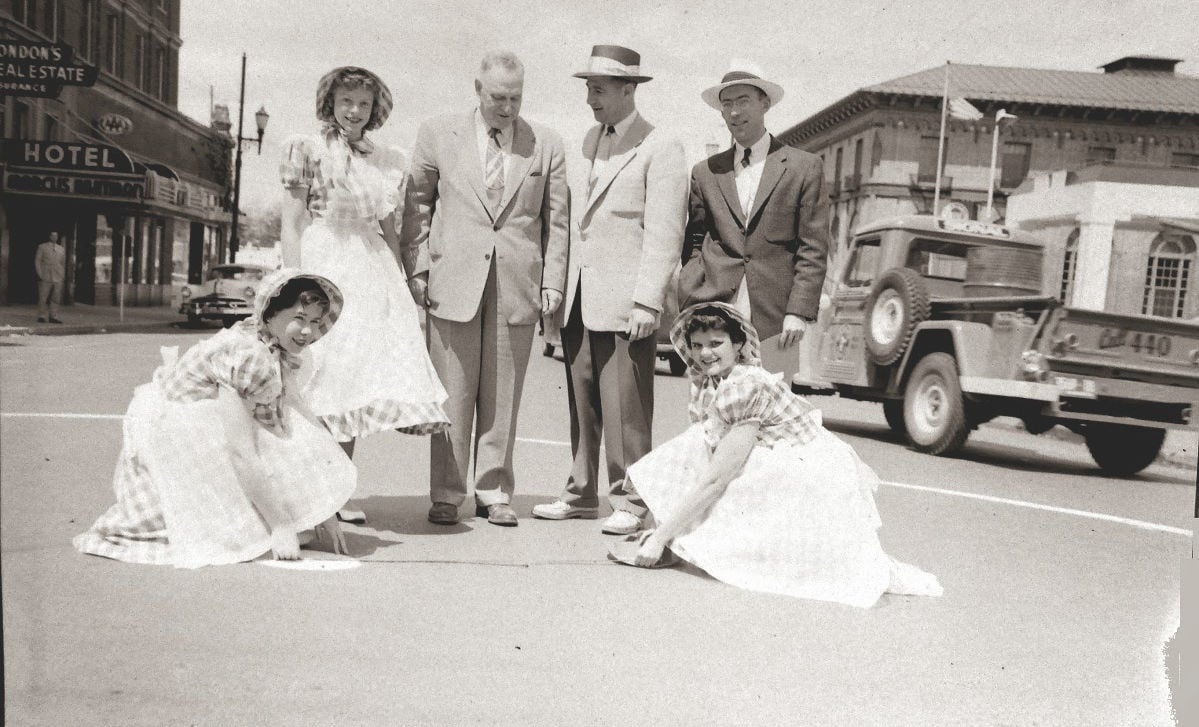 Fair Farmerettes measure the distance from the bullseye to a straw hat tossed from atop the Marcus Whitman Hotel on May 17, 1955. 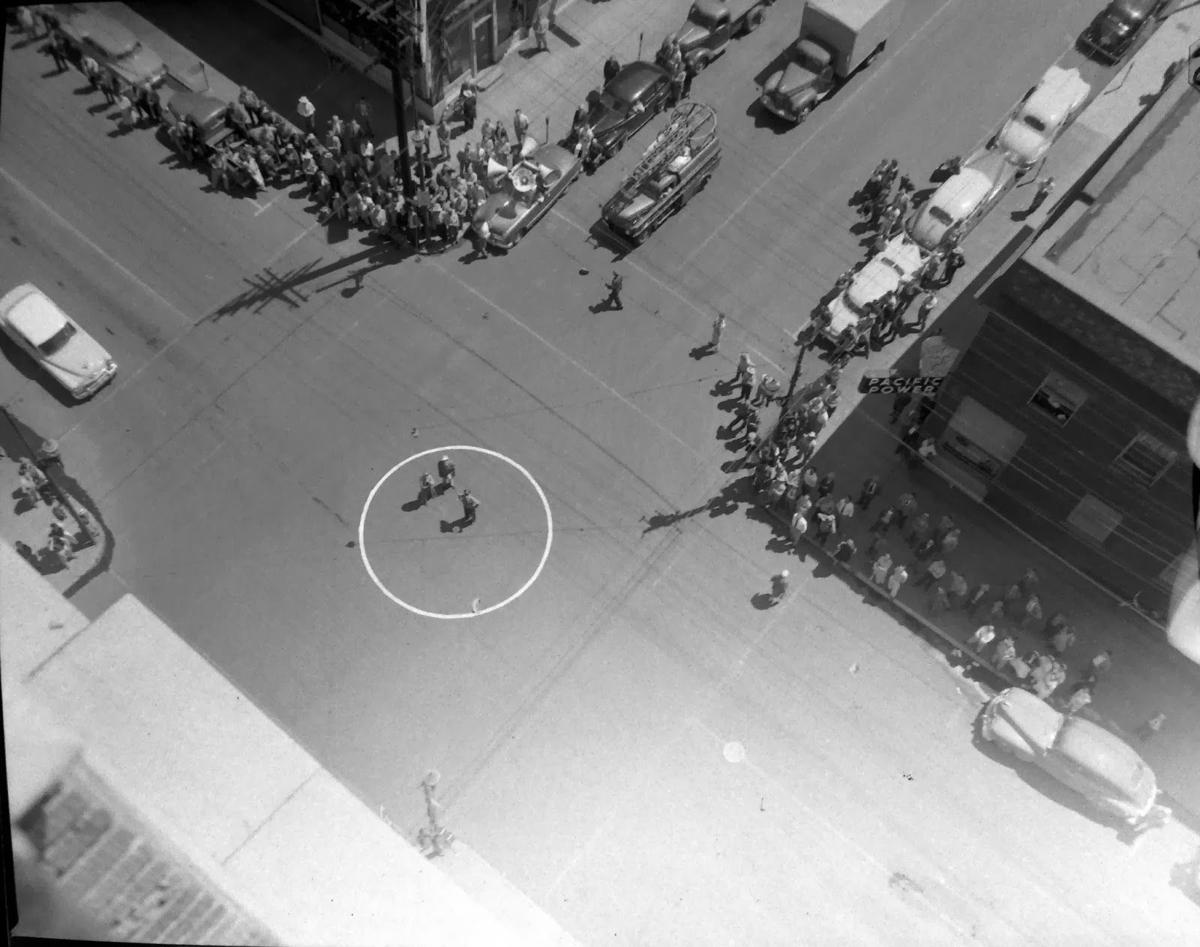 The target for hat tossers on Straw Hat Day in May 1952 visible from atop the Marcus Whitman Hotel. 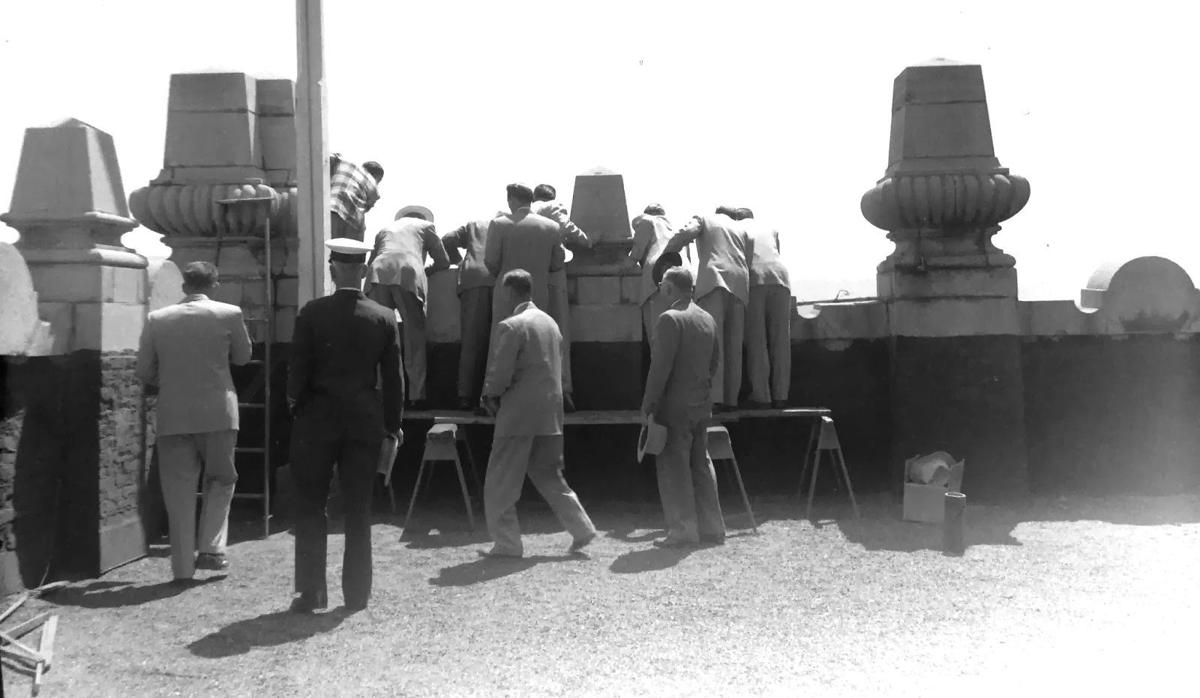 Straw Hat Day toss from top of Marcus Whitman Hotel in May 1953.

An Eldergrow garden is scrutinized at a Garden Design Kickoff event.

Fair Farmerettes measure the distance from the bullseye to a straw hat tossed from atop the Marcus Whitman Hotel on May 17, 1955.

The target for hat tossers on Straw Hat Day in May 1952 visible from atop the Marcus Whitman Hotel.

Straw Hat Day toss from top of Marcus Whitman Hotel in May 1953.

The continuing care community on Boyer Avenue and Eldergrow hosted an event on Friday for Odd Fellows residents to begin filling the garden with vibrant flowers and fragrant herbs, according to a release.

The gardens on stands offers seniors in residential and personal care communities a therapeutic connection to nature through innovative gardening programs that bring nature indoors.

“Recent studies show that horticultural therapy reduces depression, improves balance, coordination and endurance and lowers the risk factors for dementia by 36 percent,” according to a release.

“The new garden will give our residents the opportunity to create something with their own hands, giving them a sense of pride as they use the plants they grow for fun activities and culinary programs.”

Its educators planned to be on site to teach and build relationships with Odd Fellows residents through ongoing enrichment classes, including culinary and garden art curriculum.

“We are excited to grow smiles and laughter with the residents of Washington Odd Fellows Home!”

The 20th annual awards and recognition event at noon on Jan. 23 is open to the community with reservations at the Masonic Center. Cost of the lunch is $17, payable at the door. Reservations may be made by calling or emailing Nancy Walters, Walla Walla County Traffic Safety Coalition Target Zero manager, at 524-4425 or at nwalters@co.walla-walla.wa.us.

The coalition recognizes individuals, groups, agencies or businesses who through their actions and efforts have promoted traffic safety awareness in Walla Walla County.

Members of the Walla Walla Elks Lodge braved a windy day for their Straw Hat Parade.

The longtime annual tradition that in older days stopped traffic and featured bands and large crowds, “was a success,” said Exalted Ruler Diana Bieker. “Winds were high and so was our spirit.”

It “signifies renewal of our lodge, so appropriate for us this year as we are looking forward to building a new lodge building.” Big House Brew Pub hosted a party after the parade.

The next Walla Walla lodge, built in 1972-73 on Rose and Palouse streets, was sold in spring 2019 and membership is operating out of a temporary location at 22 E. Birch St.

The Elks Club straw hat parade is always on Jan. 1, year after year since 1908, according to a post on Joe Drazan’s Bygone Walla Walla blog.

Although not directly related to the parade, Joe’s blog has evidence that a Straw Hat Days event also goes back to the early part of the 1900s.

For Straw Hat Days on May 12, 1953, woven toppers were tossed from the roof of the Marcus Whitman Hotel, aimed at a target painted at the intersection of North Second Avenue and Rose Street, and the Fair Farmerettes were wrangled to determine the winner.

Vintage ads that ran in the newspaper for decades seemed to be a marketing ploy every May simply to sell straw hats.

Ad copy in May 1931 invited consumers to join the straw brigade — “off with the old felt, on with the new straw! Here comes the sun! Dreary skies are smiling blue again! spring, yes, summer is here in all its glory! ... Which is by way of informing you that your head is now in line for a NEW STRAW HAT. And what a straw hat it will be! The styles this season are “swelegant.”

The businesses often clustered their ads under one heading. In 1924 the White House/R.E. Guichard Co. — “The Men’s Store for Quality and Service,” the New York Store and Modern Clothing Co. had an ad headed “Thursday, May 15 will be Walla Walla’s Straw Hat Day. Off with the old felt, on with the fresh, new comfortable straw. The local displays are ready. The old felt will be out of date on Thursday. Buy a new straw for straw hat day.”

From Wade’s Clothing House at Third Avenue and Main Street in May 1924, shoppers could get hats in darker shades, with narrow or medium brims, high or low crowns and attractive color combinations or plain bands in Swiss, Panama or other styles.

The May 1924 ad for Gardner & Co., which before it closed in 1980 was the state’s oldest department store, offered Dobbs and McGregor straws, “and you’ll agree they are just about the best looking hats you’ve seen — all at moderate prices, too.”

A.M. Jensen Co. in a May 1931 ad, offered the Sennett straw boater style for $3.95 and the Genuine “Equadorian” Panama for $5.95. “You’ll wear the smartest straw hat in town if you select yours from our line of Schobles. These are all hand finished hats and their style is outstanding.” Jensen’s occupied the building that later became Bon Marche and is now Macy’s, which tragically, intends to close in eight to 12 weeks.