Sign Up
Log In
Purchase a Subscription
You are the owner of this article.
Edit Article Add New Article
You have permission to edit this article.
Edit
Home
NEWS
SPORTS
THINGS TO DO
OPINIONS
CLASSIFIEDS
PRINT REPLICA
LIFESTYLES
VISITOR GUIDE
PHOTOS
1 of 7 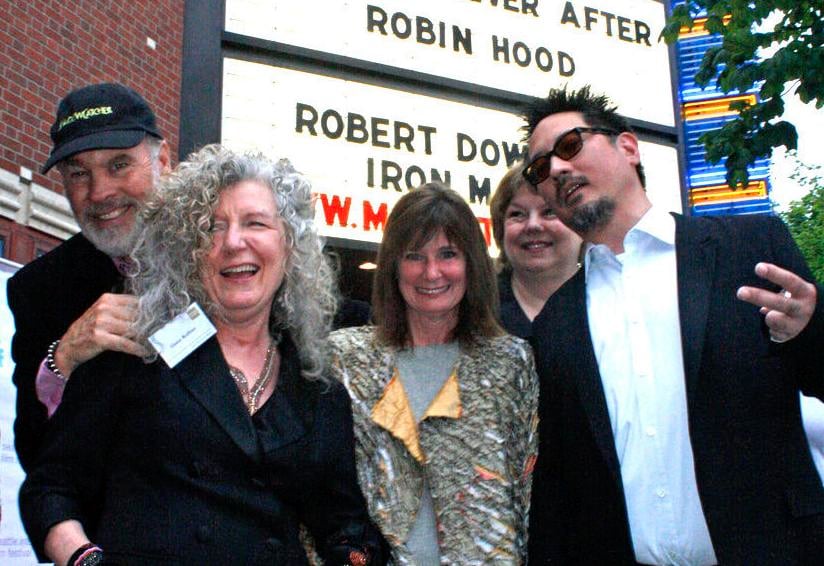 The documentary “A Not so Still Life” screened in 2010 at the Bay Theater in the Ballard area of Seattle, produced by ShadowCatcher Entertainment movie studio. From left are Executive Producer David Skinner, artist and film subject Ginny Ruffner, Director/Director of Photography and Editor Karen Stanton-Gregutt, Editor Cindy Sangster and Producer Tom Gorai. 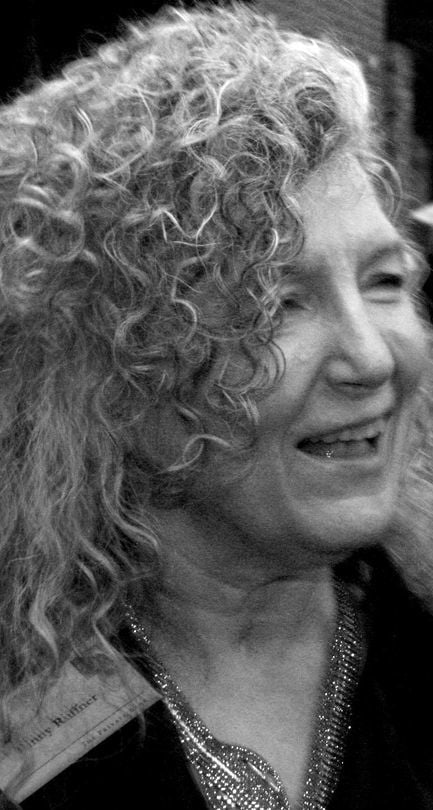 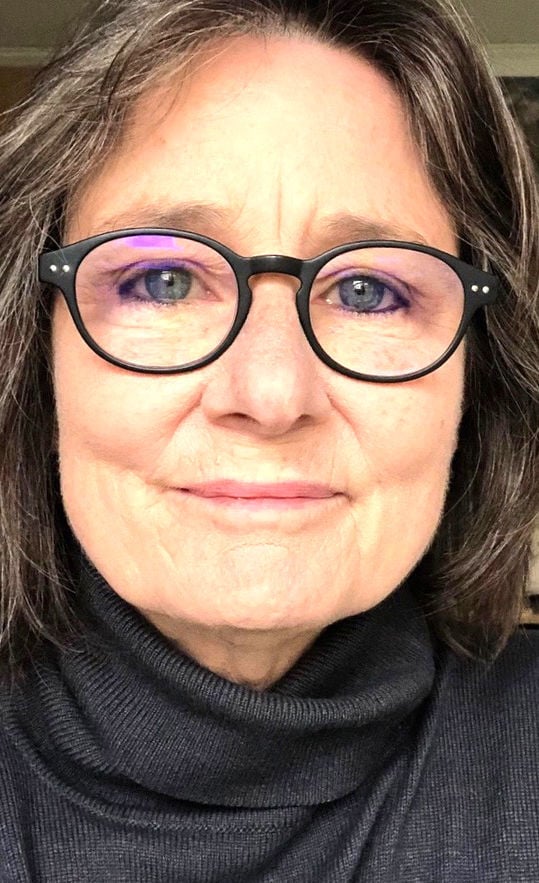 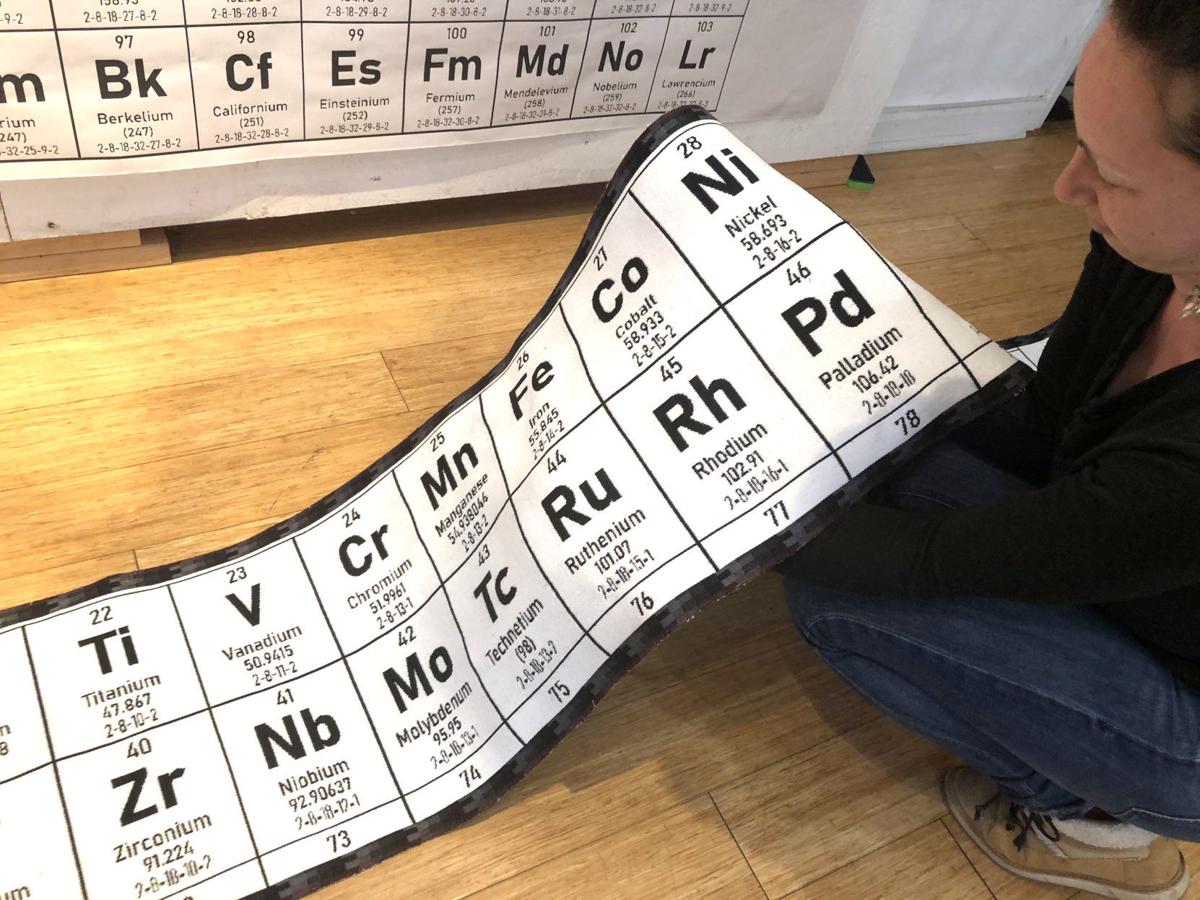 Ginny Ruffner’s current studio project is a 7-foot by 10-foot tapestry of the periodic table of elements. She said augmented reality holograms will deploy many of the elements, depicting imaginary origin stories about each element and how it got its powers. 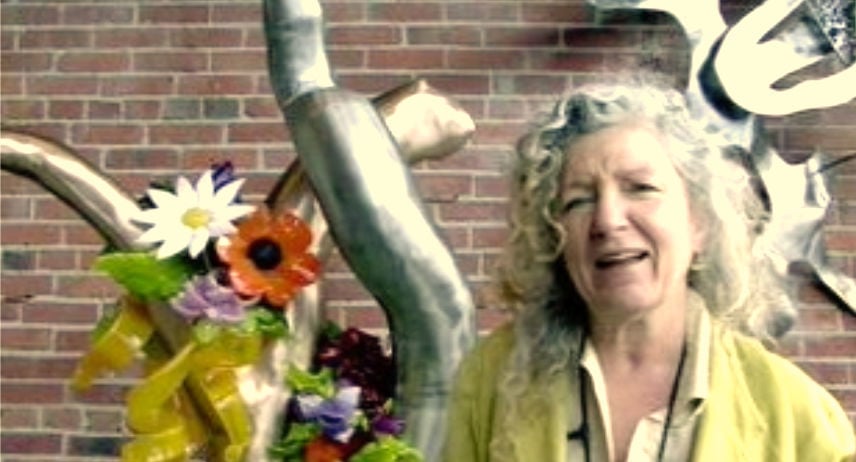 Ginny Ruffner with one of her sculptures. 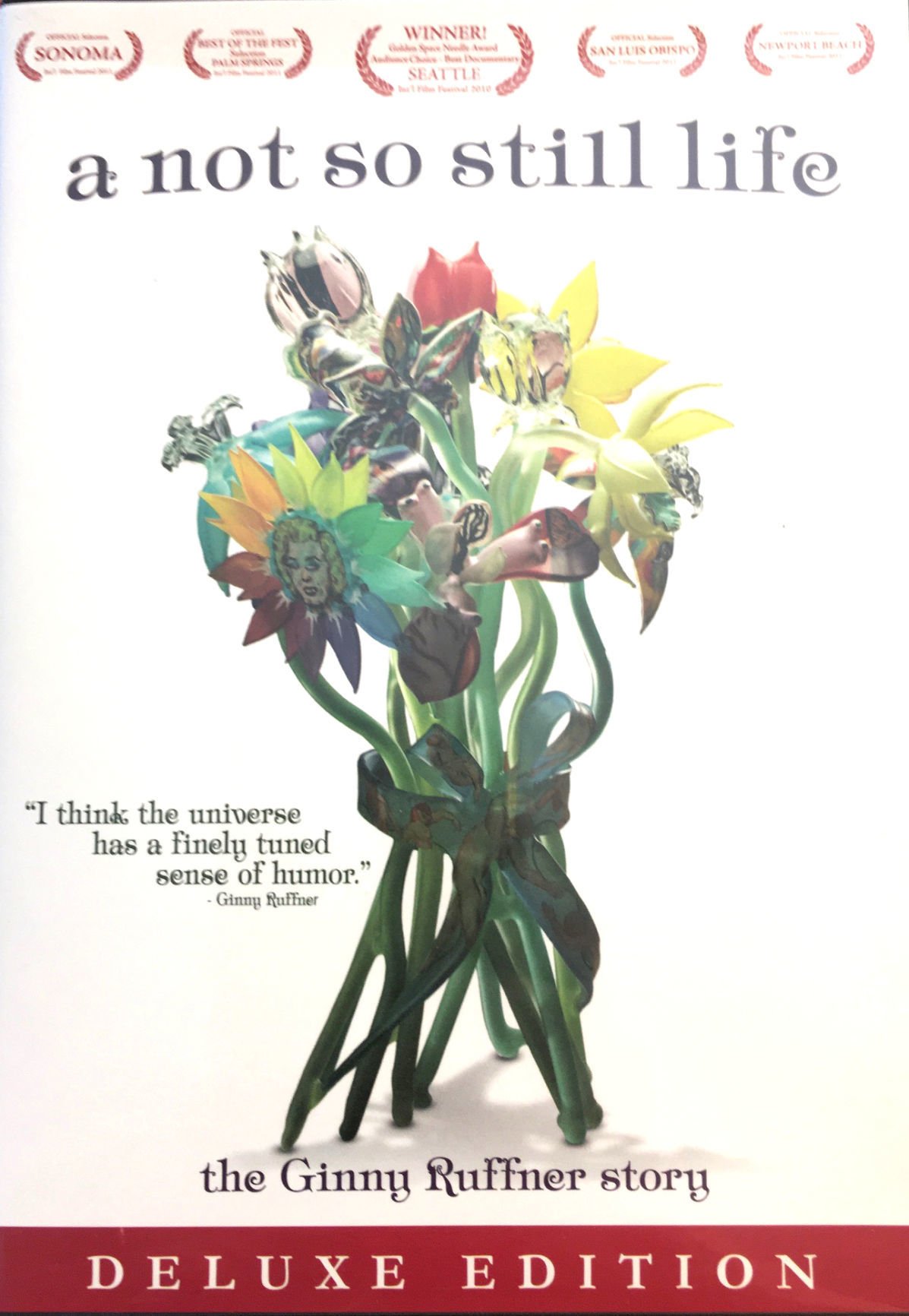 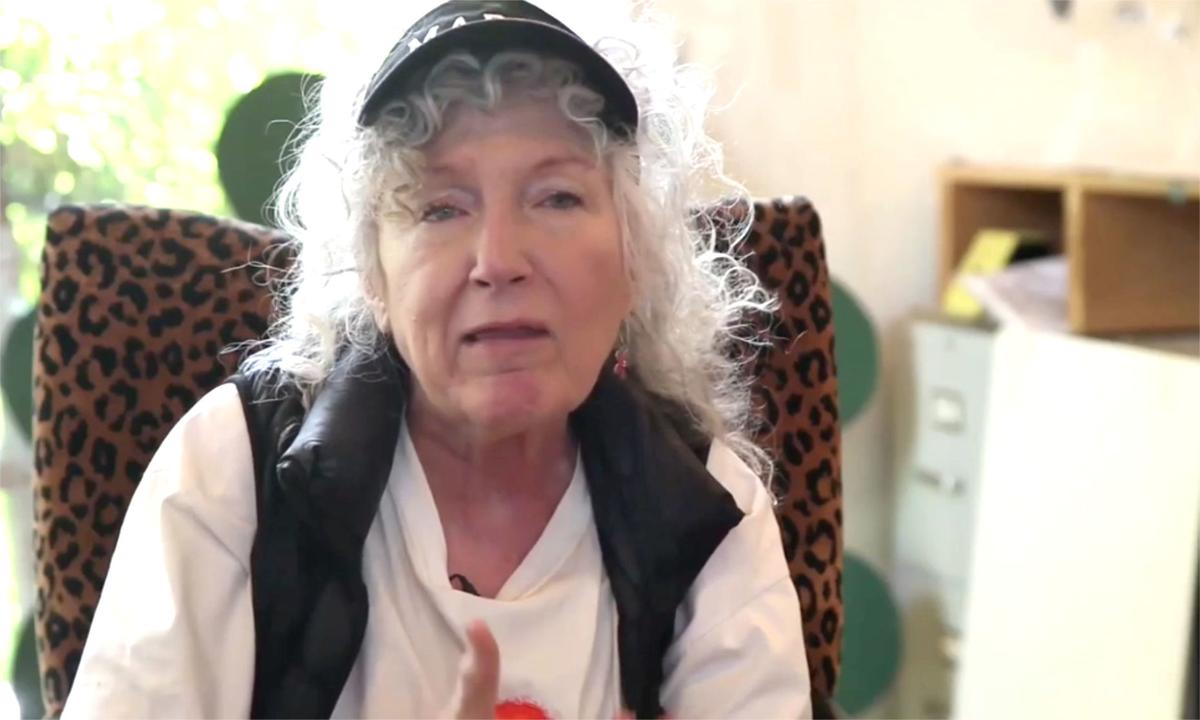 Ginny Ruffner talks in a YouTube video about her project “Reforestation of the Imagination.”

The documentary “A Not so Still Life” screened in 2010 at the Bay Theater in the Ballard area of Seattle, produced by ShadowCatcher Entertainment movie studio. From left are Executive Producer David Skinner, artist and film subject Ginny Ruffner, Director/Director of Photography and Editor Karen Stanton-Gregutt, Editor Cindy Sangster and Producer Tom Gorai.

Ginny Ruffner’s current studio project is a 7-foot by 10-foot tapestry of the periodic table of elements. She said augmented reality holograms will deploy many of the elements, depicting imaginary origin stories about each element and how it got its powers.

Ginny Ruffner with one of her sculptures.

Ginny Ruffner talks in a YouTube video about her project “Reforestation of the Imagination.”

Look up eclectic career in the dictionary and you may see a bio about Karen Stanton-Gregutt of Waitsburg. Motion pictures. Commercials. Documentaries. Property ownership and management. Politics. Fine art. Gardening. A Renaissance woman, really.

Although she has since moved away from films and commercials, 2020 is the 10-year anniversary of a documentary she made about Ginny Ruffner, another eclectic, irrepressibly optimistic creative force, an internationally renowned multi-media painter, glass artist and metal sculptor from Seattle.

A decade ago feature film maker David Skinner of ShadowCatcher Entertainment asked Karen to make a documentary about Ginny. That genre of film making “was not my world,” Karen said. Her sensibility, her experience, was in producing and directing commercials, but having seen her work convinced David that Karen was the one to tell Ginny’s story.

Ginny was in the early glass-as-art movement with another glass giant, Dale Chihuly, Karen said. Ginny devised a new way to work with glass rods and torches. Her work is everywhere, in museums, galleries and collections around the globe. “She’s a deal in the glass world,” Karen said.

A huge watering can trickles water onto giant flowers, causing a stalk of blue blooms to open and close in a 15-minute cycle.

The orange steel flowerpot is 9 feet tall by seven feet wide and passersby can watch its inner mechanisms at work through a viewing window. Seating is afforded on the flowerpot’s saucer.

At 39, Ginny almost died in a major car accident in 1991. In a coma for more than five weeks, it looked as if the respirator plug would be pulled on her. But she revived, at first only able to move her thumb, and came back from her injuries, altered because of the brain injury but resolute to thrive.

“I was flattered to chase her around for a year with a camera. I met her family in South Carolina,” Karen said. Many others were interviewed for the production, including Ginny’s friends, novelist Tom Robbins, singer-songwriter-musician Graham Nash and Dale.

The film, “A Not so Still Life: The Ginny Ruffner Story,” took at least 12 months to film. Karen described the process as an intimate experience where she got to know Ginny.

She brought in a second team of shooters to get more camera shots when she followed Ginny to her childhood home in the South. Editing lasted another six months. Karen is the creator of the work but David Skinner owns the film.

Karen even screened it two nights in a row at the restored 100-seat 1928 Plaza Theater in Waitsburg. A party followed in the Gregutt garden. “It was really fun,” she said. They raised $600 to help the local library buy computers. She enjoyed going to film festivals with Ginny and speaking with audiences after the documentary was shown. The documentary is for sale on amazon.com.

Karen said she grew up in the motion picture industry, first with a film company in Los Angeles. Moving to Seattle, she ran Kaye-Smith Co. (of owner-actor Danny Kaye and co-owner Lester Smith fame), which produced regional and national TV commercials and corporate films.

“It was a wonderful career,” she said. She bought the business in 1994 when the owners “aged out.” Anyone tuned in at the time may remember her commercials for such big-gun companies as Weyerhaueser, Microsoft and Boeing. And Seattle’s own Rainier Beer — (one, in which a motorcycle approaches from a distance, shifting gears, increasing and then receding in volume, sounding like Rrrrrraaaaaaaiiiiiinnniiieeer Beeeeeeeeer).

In the stable of those 15 clever, funny 30-second beer commercials was one filmed on the late Don Thomas’ farm out of Waitsburg to promote the beer company’s new foil-wrapped cold pack. Don drove the mules and wagon hauling a bigger than a stage-coach-sized box of beer for Rainier’s Cold Pack Days campaign.

In the Running of the Rainiers ad, Karen said she had University of Washington football players who could legally participate don heavy fiberglass beer bottles. “They could only see out the neck through black cloth situated at the R (in Rainier). They would stand until cued and then run.”

She wrapped up her film career and switched gears when she and husband Paul Gregutt settled in Waitsburg 15 years ago. She’s transitioned to fine art, painting and drawing in her Waitsburg studio. She served on the ArtWalla Board for two years, then became involved in politics and serves on the Waitsburg City Council. She owns Waitsburg Cottages and full-time rentals.

When the Gregutts first arrived in Waitsburg it was barely on the radar with artists, she said, but since then it’s become an artists’ colony as painters, photographers, writers, chefs, sculptors, printmakers, poets — a substantial list of creative sparks who found it an ideal, affordable place to settle.

She said about half of the town’s 1,200 inhabitants are artists. Ginny has been to visit, too.

And Ginny emailed she is now working mostly in computer-generated imaging — CGI — or what she calls augmented reality. She has two shows traveling. Her glass and augmented reality exhibit, “Reforestation of the Imagination,” closed in January at the Smithsonian and is now on national tour headed to Kalamazoo, Mich.

Her metal sculpture and AR show, “Alternative Mythologies,” is at the Pacific Science Center in Seattle.

She said she feels driven to work on her current studio project, but has “no idea where it will go. I just wanted/needed to make it.” It’s a 7-foot by 10-foot tapestry of the periodic table of elements.

“Augmented reality holograms will deploy many of the elements. However, they will not ‘depict’ those elements. Instead, they will depict imaginary origin stories about that element and how that element got the powers that it has. Kinda geeky. But I’m kinda geeky. I’m having a blast making up stuff that has a thread of truth,” she said.

Check out Ginny’s work at ginnyruffner.com.