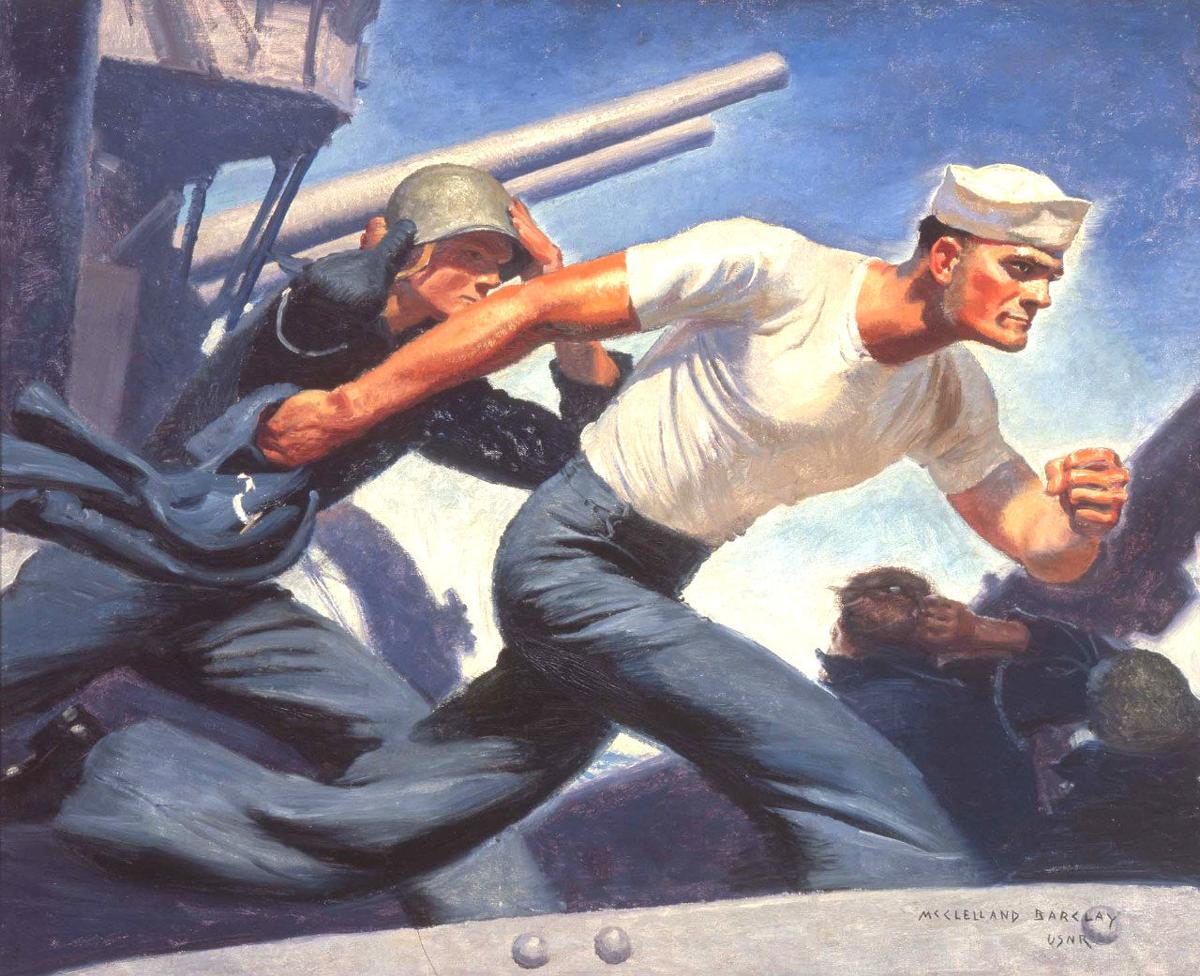 Battle stations! McClelland Barclay’s original oil painting on canvas, 1940-42, was intended for posters, but an example does not exist in the Navy Art Collection. 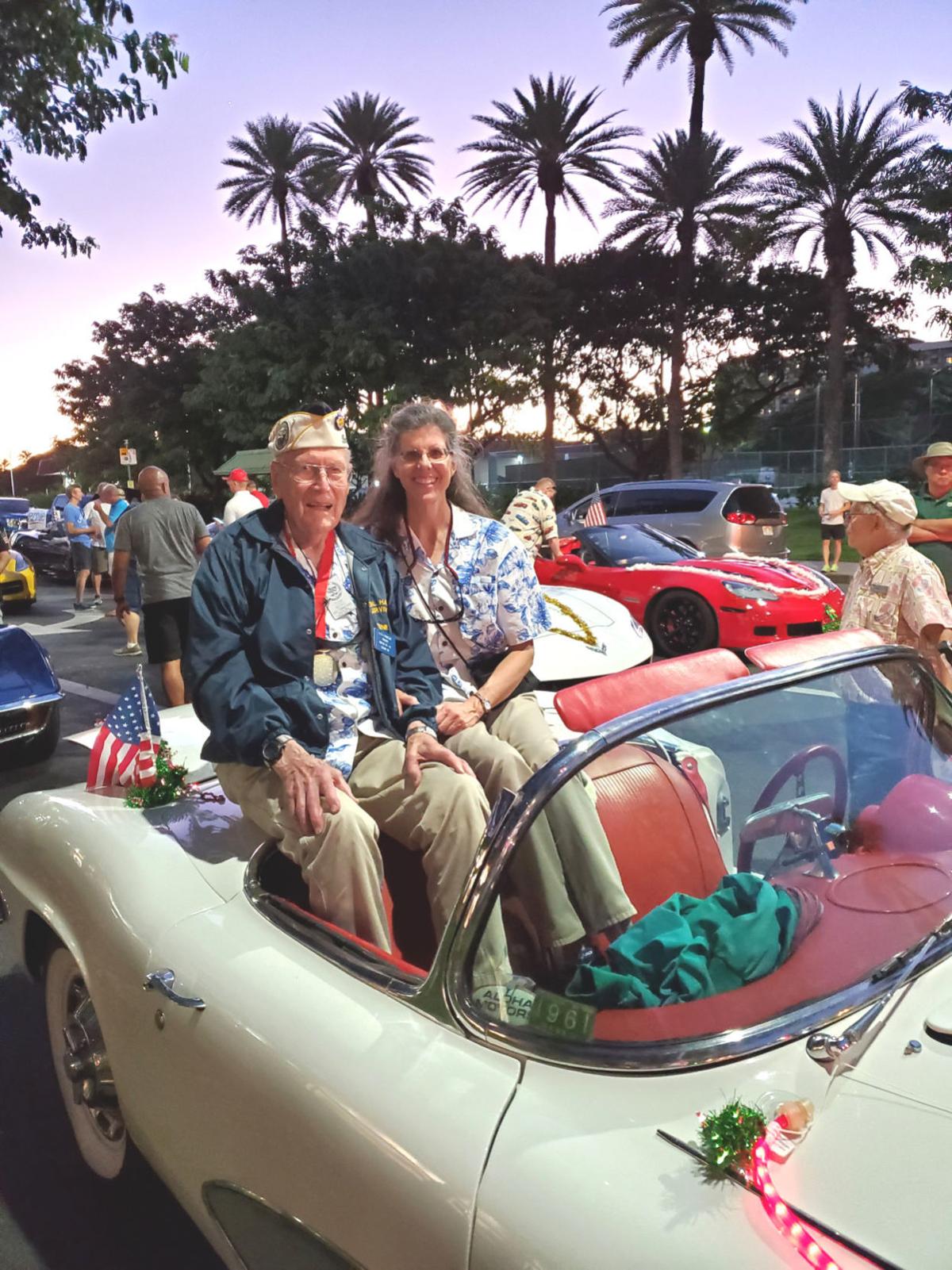 Parade Marshal Tom Berg and wife Lesa Barnes ride in a classic Corvette on Dec. 7 during the annual parade in Honolulu. 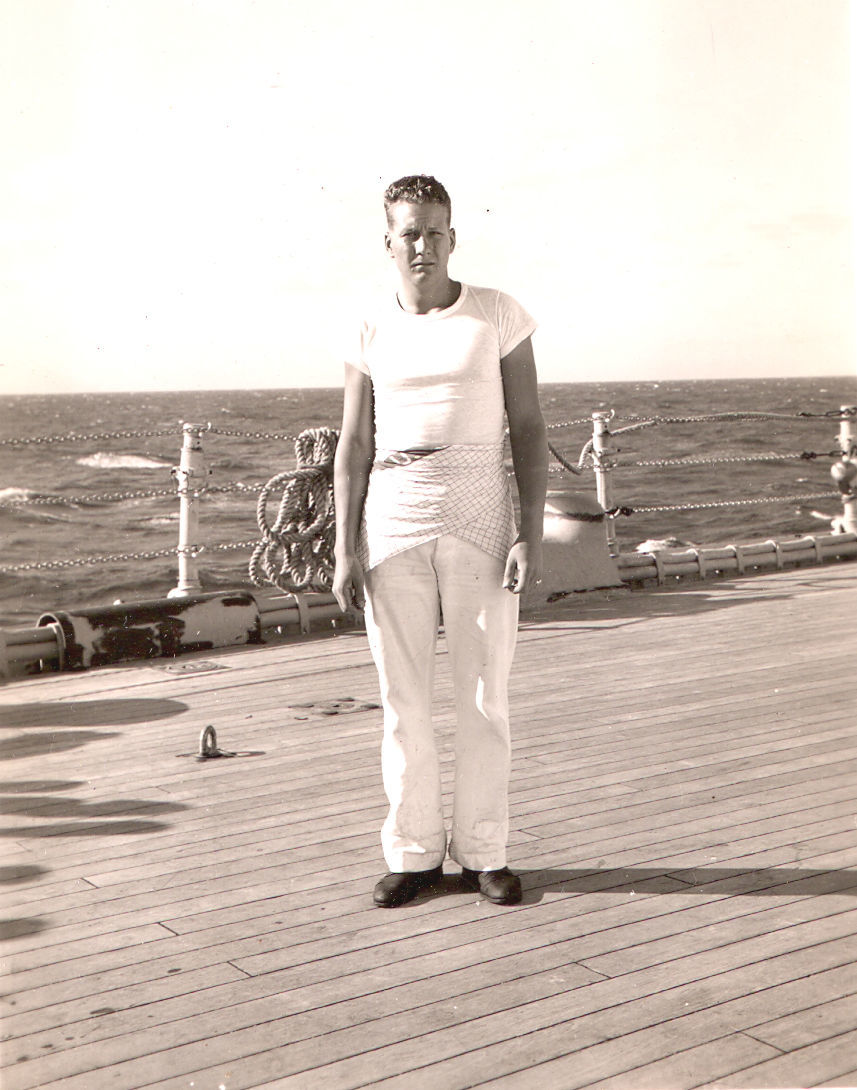 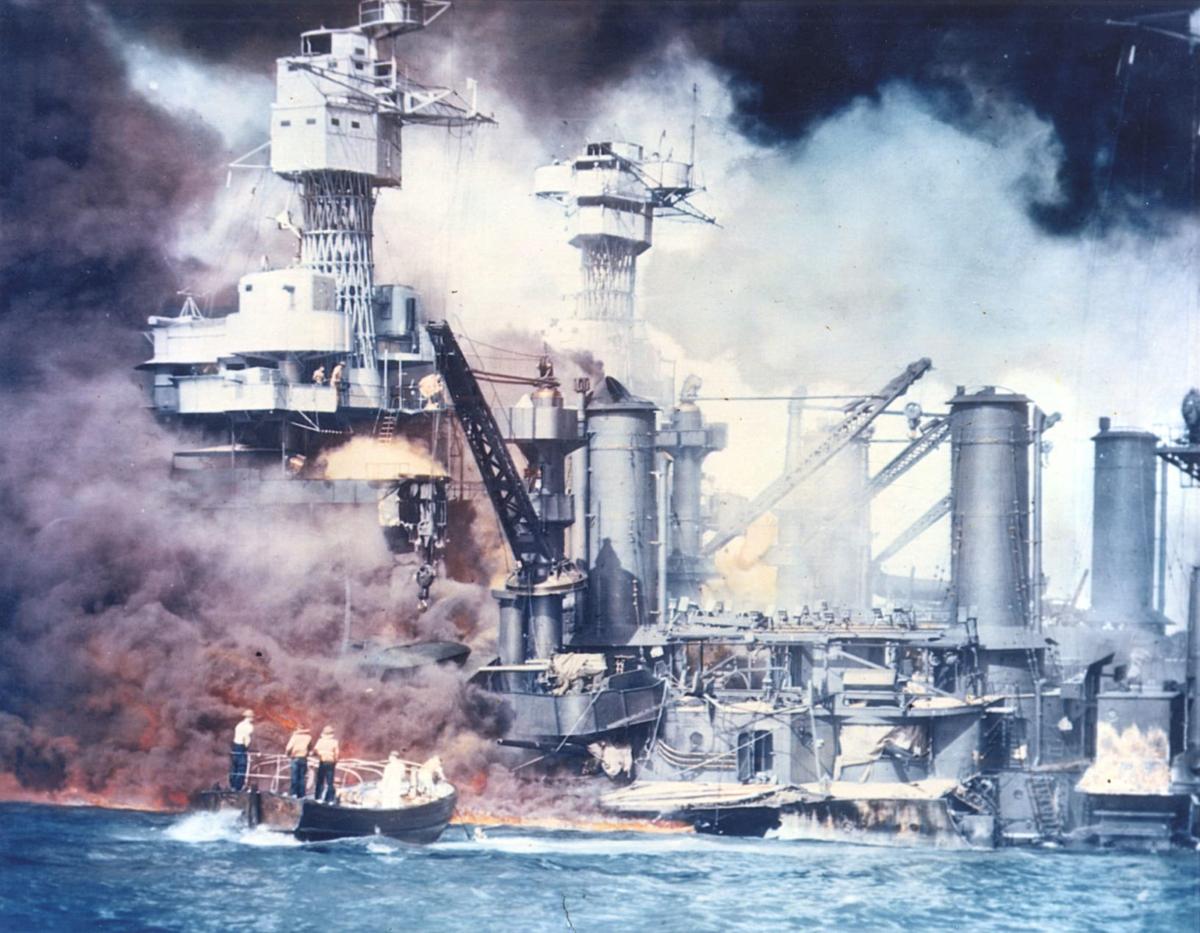 The Imperial Japanese Navy Air Service attacked Pearl Harbor, Hawaii, on Dec. 7, 1941. Off its starboard bow, a crew rescues a seaman from the 31,800 ton USS West Virginia (BB-48), burning in the foreground. Smoke roiling out amidships shows where the most extensive damage occurred. The mast of the USS Tennessee (BB-43) is behind at right of center.

Battle stations! McClelland Barclay’s original oil painting on canvas, 1940-42, was intended for posters, but an example does not exist in the Navy Art Collection.

Parade Marshal Tom Berg and wife Lesa Barnes ride in a classic Corvette on Dec. 7 during the annual parade in Honolulu.

The Imperial Japanese Navy Air Service attacked Pearl Harbor, Hawaii, on Dec. 7, 1941. Off its starboard bow, a crew rescues a seaman from the 31,800 ton USS West Virginia (BB-48), burning in the foreground. Smoke roiling out amidships shows where the most extensive damage occurred. The mast of the USS Tennessee (BB-43) is behind at right of center.

“So I just came up topside with my bib around my waist and I was washing up the plates from the previous mess,” he told q13fox.com in a May 31, 2019, interview.

At 19, the native of Aberdeen, Wash., and currently of Port Townsend, Wash., had a bewildering, heart-pounding-in-throat bird’s-eye view aboard dreadnought battleship USS Tennessee as airplanes fired away on their approach. All the ships moored on Battleship Row in Oahu were sitting ducks when the Japanese attacked at 7:55 a.m., pushing the U.S. into World War II.

What unfolded was incomprehensible at first: “I saw an airplane on the north end of Ford Island, machine gunning something. And he pulled out of a dive and flew right over me, and he had two great big red circles under his wings,” he said. “I had no concept of the Japanese coming, and I thought, that’s an Army Air Force plane and they decorated it to make it look more realistic,” he told q13fox.com.

“And then the clarinet player from the morning’s color band came running through our compartment yelling, ‘The Japanese are attacking!’ I looked at him strangely. He must’ve gone berserk,” Tom said.

In about 75 minutes the Japanese destroyed 188 Army and Navy aircraft and decimated or damaged 19 ships, including eight battleships, at the naval base, headquarters of the nation’s Pacific fleet.

A letter the 97-year-old veteran sent to Veterans of Foreign Wars Washington State Commander John Rust said Tom and wife Lesa Barnes want to get a count of men and women survivors who live in Washington state.

“There is no official record of how many living survivors there are in the country and certainly no such tally exists for Washington,” Tom wrote. “We are doing what we can to get a head count for our state.”

Tom was one of 30 members of the Pearl Harbor Survivors Association Chapter 10, the last chapter to form in the late 1980s to early ‘90s and first to disband about 15 years ago as membership dwindled. Tom is the only one left in the area as others moved away or died, Lesa said.

The national association disbanded in late December 2011 with a membership of about 2,700 nationally. Sons and Daughters of Pearl Harbor took over and is growing. Lesa plans to contact the S&D chapter in Vancouver, Wash., to see if they have survivors to report. Find out more about this group at sdphs.org/index.php/newcomers.

Lesa spotted a license plate of a Pearl Harbor survivor in the Bremerton, Wash., area, but noted widows often don’t change the vanity plates when their husbands die.

Rust disseminated their letter to VFW chapters, including Grant Farmer Post in Walla Walla, and the state Department of Licensing may be able to check for survivors. There don’t seem to be any survivors on the Olympic or Kitsap peninsulas, said Lesa. There have been deaths of survivors in recent years from Tri-Cities and Spokane.

A mixup meant the Japanese attacked two hours before their declaration of war against the United States and Great Britain was registered in Washington, D.C.

Speaking with Cmdr. Frank Sorba of VFW Post 5760, Mercer Island, Wash., Tom said when general quarters sounded on the USS Tennessee, calling all hands to battle stations, he reported to Engine Room 7, 20 feet below the water line in the ship’s bowels.

Tom believes he is alive today because the West Virginia shielded the Tennessee from being hit.

He told q13fox.com, “With these torpedoes coming in, I was very fortunate that we were inboard. We had the West Virginia protecting us. And the Maryland was in front of us, and she took a bomb through the bow of the ship.”

Five aboard the Tennessee were killed, including Tom’s friend Gene Rowe, who was hit by a fragment that went around a shield on an anti-aircraft gun he was manning at a topside station.

Before being transferred to the boiler room, Tom had been a crew member there, too.

“It was pretty hectic, chaotic,” George said. “I remember running back and forth and passing ammunition and trying to do three things at once.”

He can doubly count his blessings as his request to serve on the USS Arizona to be with a high school friend was denied.

Pearl Harbor is the final resting place for 2,403 American service members and 68 civilians. And 1,178 others were wounded.

Sticking by his battle station until night fall on Dec. 7, he was sent to refill a 5-gallon container of drinking water and detoured up on deck.

The startling sight of a completely blacked out Honolulu has stuck with him: no night lights visible anywhere, just fires raging aboard the Arizona and other ships.

The crew lit off Tennessee’s boilers in preparation to sail away, as is standard at general quarters, Tom said.

However, the West Virginia, now sunk and immovable on the outside, pinned his ship against the bulkhead.

Crew ran Tennessee’s screws/propellers, which kept oil and flames away.

They stayed at a heightened state of defensive readiness on general quarters until sometime on Dec. 8 for fear of another imminent attack.

The crew received small arms in the event they had to repel boarders if the Japanese entered the harbor after the initial attack, Tom said.

On the main deck the next morning, Tom reported wading knee-deep through 5-inch in diameter/18-inch long anti-aircraft shell casings.

Intense heat from firing the Mark 12 38-caliber guns melted the paint, which hung off the weapons’ barrels in shreds.

Tennessee sustained minor damage, was repaired and operated off the U.S. West Coast in 1942.

In 1943, Tennessee and many of the older battleships built in the 1910s-1920s were thoroughly retrofitted to prepare them for operations in the Pacific Theater and in June-August, Tennessee provided gunfire support to troops fighting to retake the islands in the Aleutian Islands Campaign.

The Gilbert and Marshall Islands Campaign followed from November 1943-February 1944, including the Battles of Tarawa, Kwajalein, and Eniwetok. In March, Tennessee raided Kavieng to distract Japanese forces during the landing on Emirau and from June-September, she fought in the Mariana and Palau Islands.

Historian Bess Taubman reported in “My Pearl Harbor Scrapbook” that Tennessee participated in 13 battles in the war, more than any other battleship in the Navy.

Wishing to use it as a memorial, the state of Tennessee in 1959 tried but was unable to obtain the ship from the Navy, which determined it couldn’t sail up the Mississippi River. It was sold as scrap.

Later, Tom completed a mechanical engineering degree from the University of Washington on the GI Bill.

He retired from that profession in 1977.

Tom was honored at Pearl Harbor on Dec. 7, 2019, as parade grand marshal. He and Lesa have attended all nine official Pearl Harbor parades in Honolulu, she said.

His attendance at the events serves to connect him with other survivors and make new friends.

— Gleaned from Tennessean archives for a 2015 story and details from Bess Taubman's book.