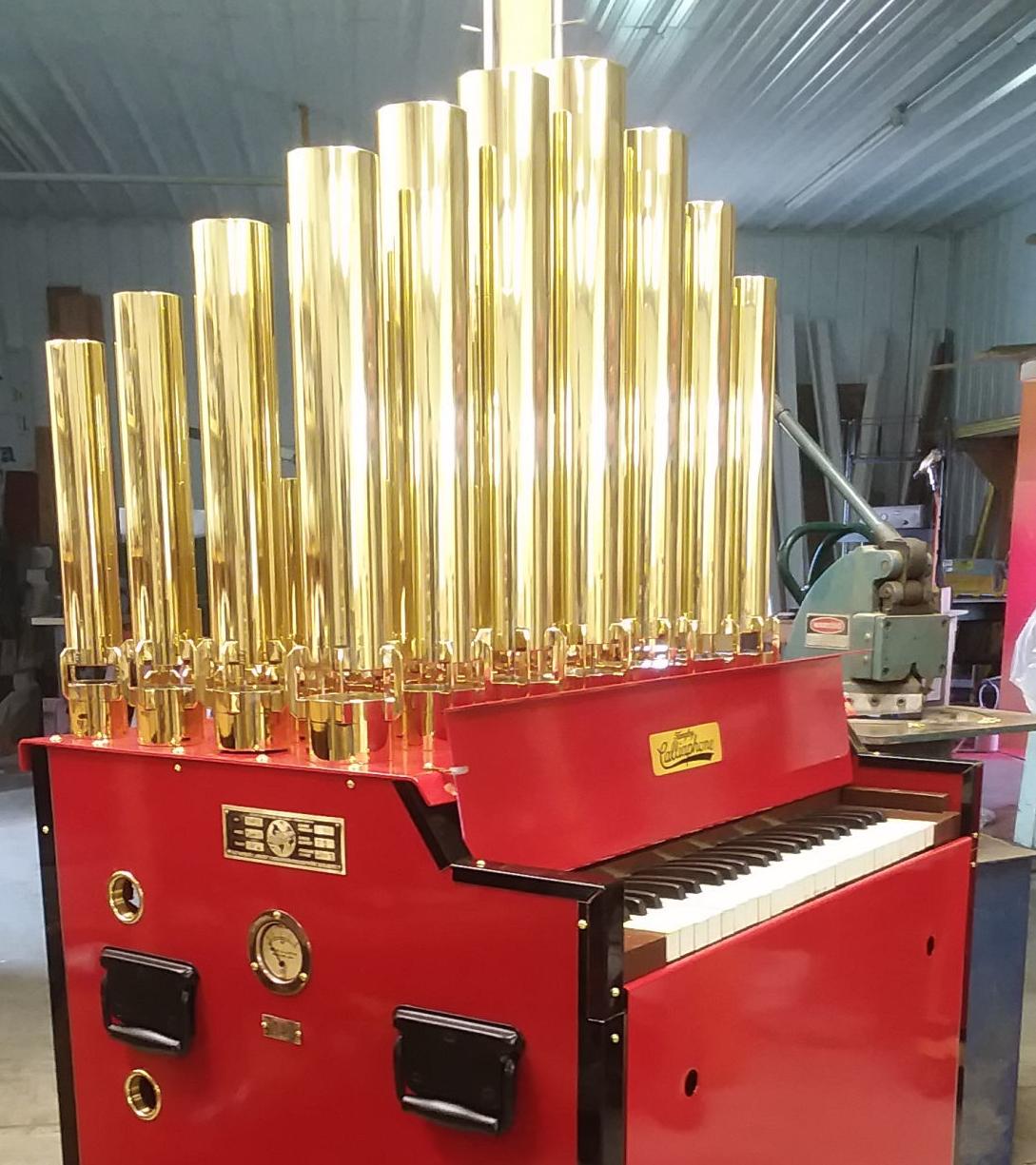 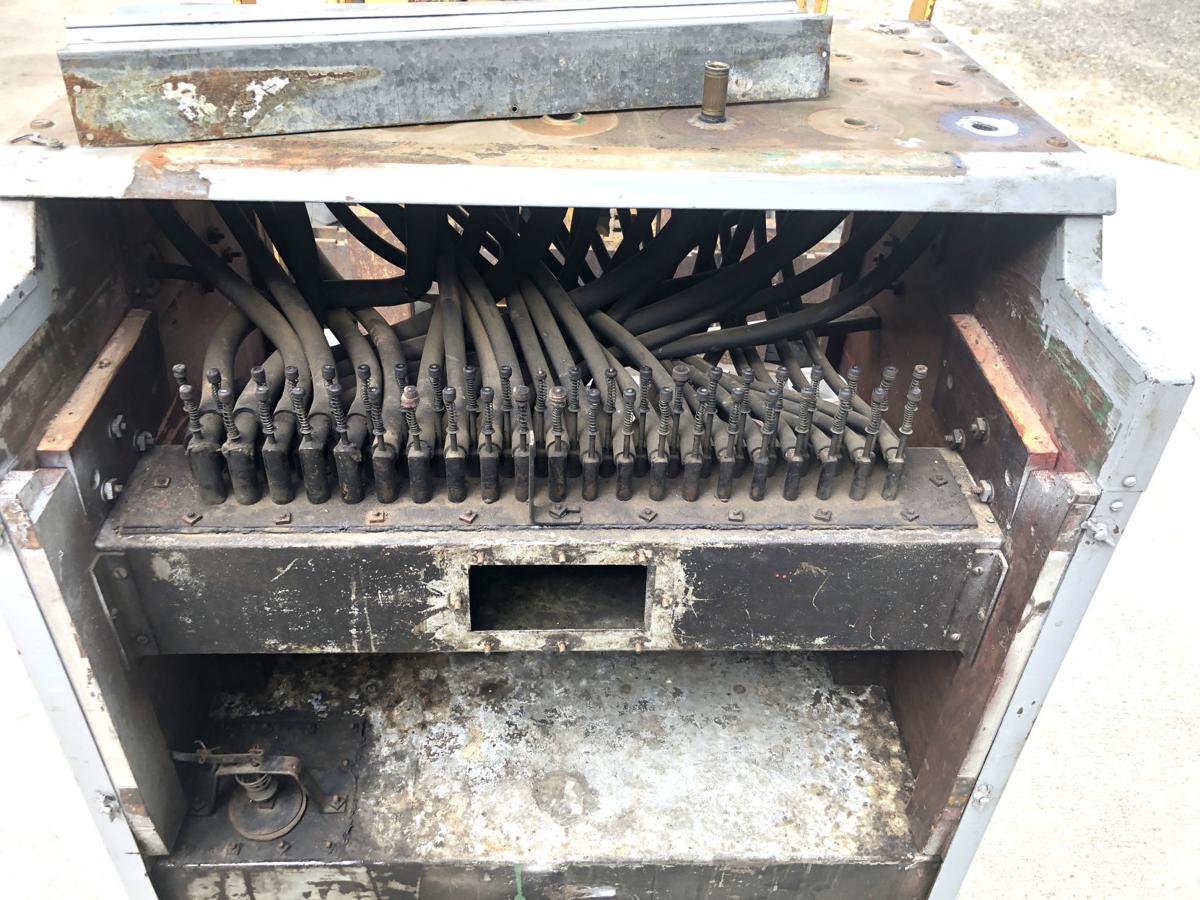 The inner workings of the calliope before restoration. 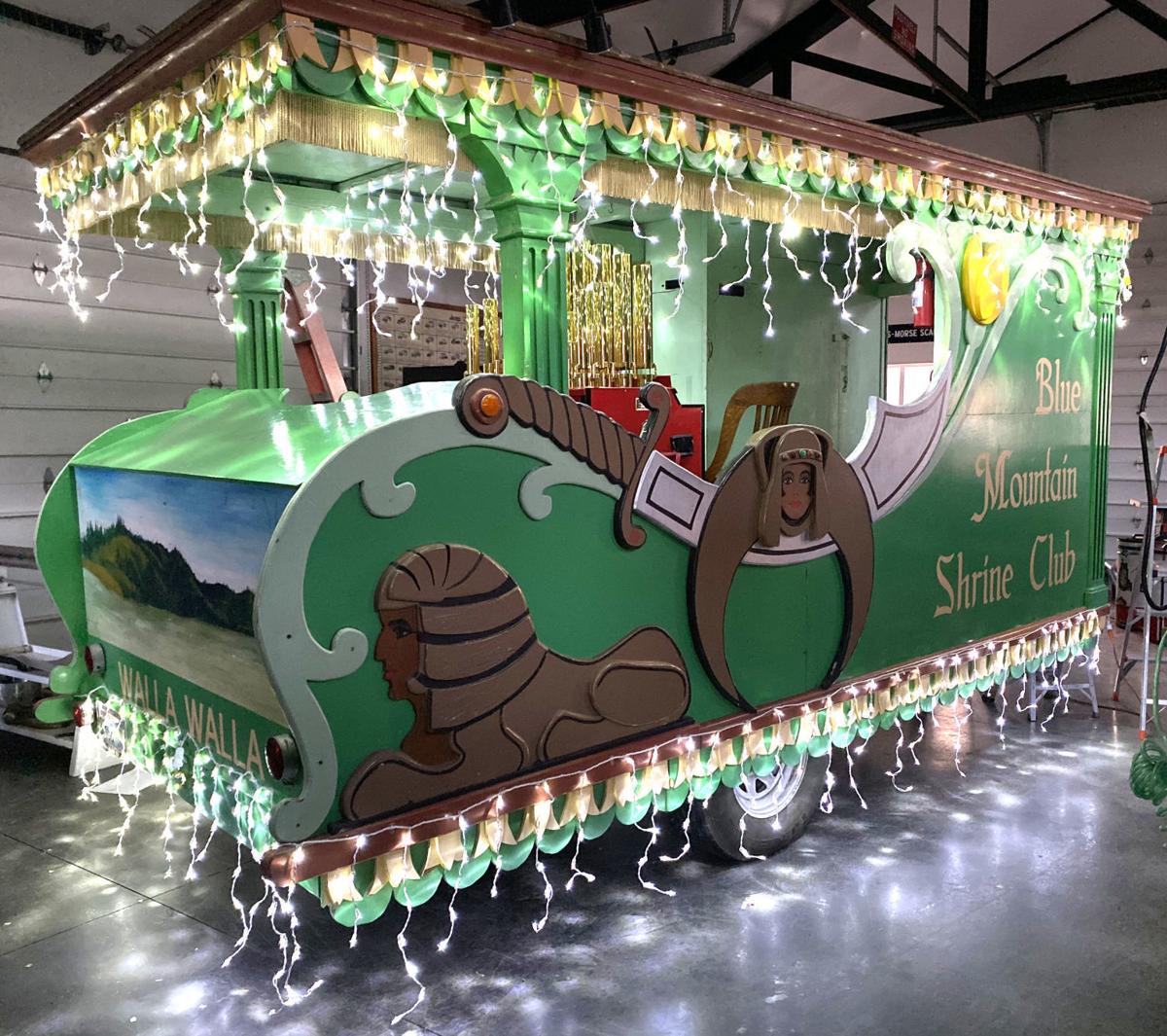 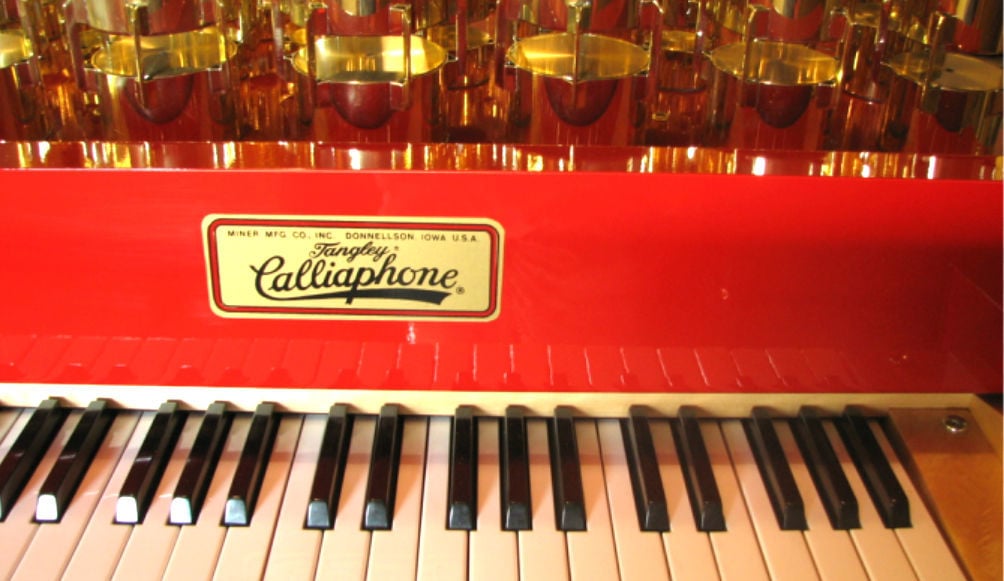 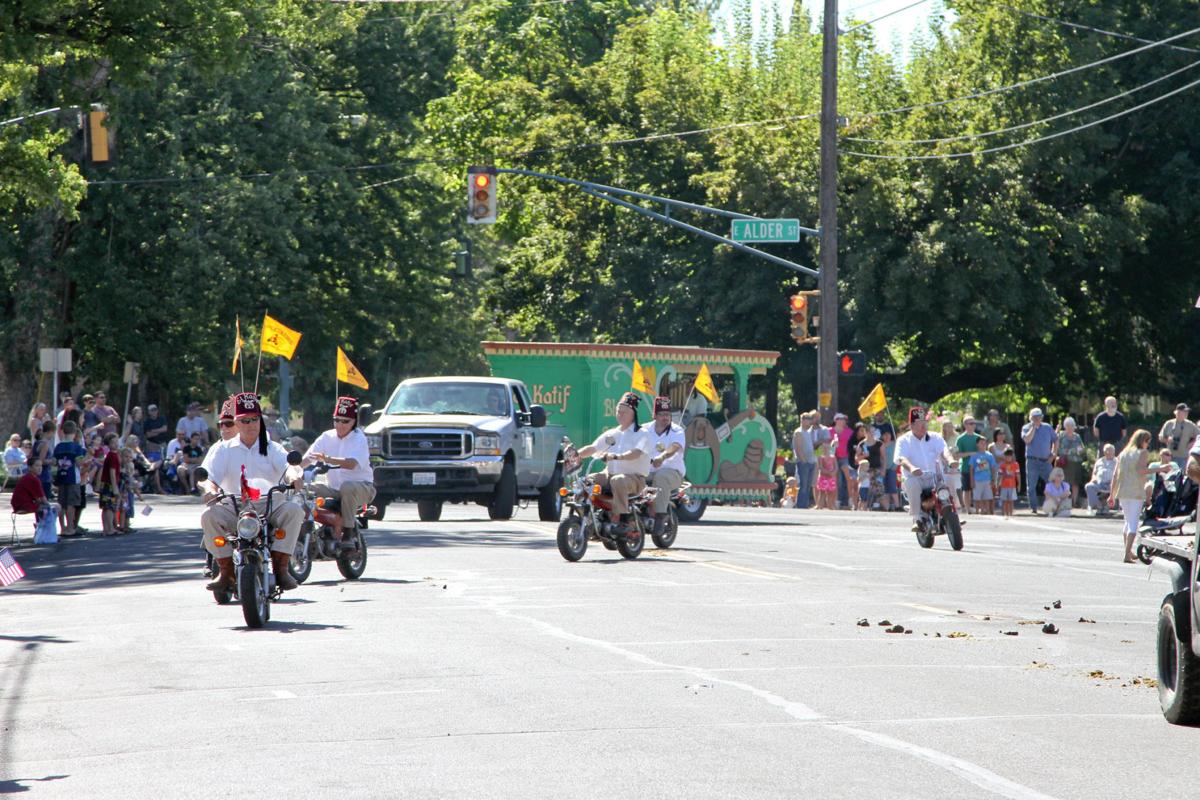 The inner workings of the calliope before restoration.

Blue Mountain Shrine Club‘s calliope (kah-lie-oh-pea), a gleaming brass-horned musical instrument that rides in a bright-green, ornate Middle Eastern-themed trailer, is hard to miss as it trumpets its presence along parade routes.

The club in about 1955 created the elaborate trailer in which it’s ensconced, said Shrine member John Cranor, 76, of Umapine. At the time, local businessman and Shriner Ivan Berry did a lot of the mechanical work, building the machinery to power the calliope.

Three-dimensional images from Shrinedom and its emblem decorate the trailer’s sides. A scimitar represents its members. Two claws represent Shriners fraternity and philanthropy. The sphinx stands for Shriners’ governing body and the five-pointed star represents the thousands of children helped by its annual philanthropy.

Built in the 1920s, the calliope itself was about 30 years old when it was installed in its fancy awning-covered trailer. The small air-powered pedal-pumped treadle organ sends compressed air to its whistles. Operating the 43 keys allows it to cover 51/2 octaves, John said.

The mechanism having fallen into disrepair, the club substituted a cassette player to mimic its sound. About a year ago they removed the steel box organ, built a crate and shipped it by truck to Dan Dohman, a specialist who holds patent rights to the machinery and restores and builds new ones at his one-man business in Kirksville, Mo. Missourilife.com reports Dan is one of the few remaining restorers for what few people even know what it is.

Dan enabled the Walla Walla calliope to run automatically, similar to a player piano, with a {span class=”ILfuVd”}{span class=”e24Kjd”}Musical Instrument Digital Interface/MIDI{/span}{/span} file system that operates the keys. The instrument can also be played manually, but Shrine does not currently have an organist/keyboardist. Engaging a guest keyboardist is under discussion at this point, John said.

And since the restoration in 2019, the visually distinctive calliope vehicle has been towed by a pickup truck for parades on Labor and Veterans days and the {span class=”st”}Macy’s Holiday Parade of Lights{/span} in December. Up next are parades in Waitsburg, Dayton, Athena and Milton-Freewater, in addition to Walla Walla.

A goodly crew of Shriners are involved with three to four riding in the pickup truck and two-three members and or prospective members in the trailer with John at the keyboard running the MIDI driver, selecting the songs, pushing play and “pretending to attend to the keys.” They’re easily identifiable by their logo shirts and traditional Shriner headwear, the famed red fez with black tassel.

Depending on the event, parade goers will hear a fair variety of recorded pieces, such as traditional Sousa marches, military songs such as the Navy and Marine Corps hymns, Yankee Doodle and four to five Christmas songs for the Parade of Lights.

By end of April-first of May, the Shriners will have the calliope out of winter storage and ready for Memorial Day, Fourth of July, Waitsburg, Dayton and Athena Caledonian Games parades.

John’s grandfather-in-law Ray Thompson was a Shriner and organist who played in dance bands. He’s the guy who played the calliope in parades before his death in 1959.

New Yorker Joshua Stoddard patented the first steam calliope in 1855 and named it for the “beautifully voiced” muse of Greek mythology.

Mechanical Music Press reports, “It played awful music. It was too loud for comfort and, despite the fact that its manipulator was as much a plumber as musician, one never found a calliope with all whistles in tune at one time.”

Norman Baker patented the Tangley Calliaphone in 1914 to draw attention to his shows. The instrument’s sound was often blasted through ear-drum breaking train whistles and could be heard a couple of miles away.

John added that the raucous instrument was developed to bring attention to circus wagons and steam boats on river systems, as in “here comes the gambling boat, the circus and Shriners.” So the local calliope and parading say, “here we are. We are here for a reason, to support Shriners Children’s Hospitals, including the Spokane hospital, to benefit everybody. It keeps Shriners in the forefront of people’s attention,” John said.

There are about 30 Shrine members who also belong to the local Masonic Lodge. For years they had an Oriental Band here, whose members wore Middle Eastern Arabic-style costumes with blousy pants and shoes with turned-up toes. John played a long tom-tom drum as part of that group 35 years ago. Others played a musette flute, cymbals, tambourine, gong and a bass drum, but the band discontinued because of dwindling numbers. However, it still exists in Spokane, he said. Sousa, by the way, composed the minor-key “Nobles of the Mystic Shrine Bands” march.

Fewer numbers also mean they’ve stopped running the Cycle Patrol during parades. They rode in formation, executing patterns on more than a dozen of the diminutive CT70 Hondas, built between 1969-1975 and painted to match, but advancing years dictated mothballing the fleet, John said.

For more information and to inquire about playing the calliope, contact John at jandlcranor@me.com.