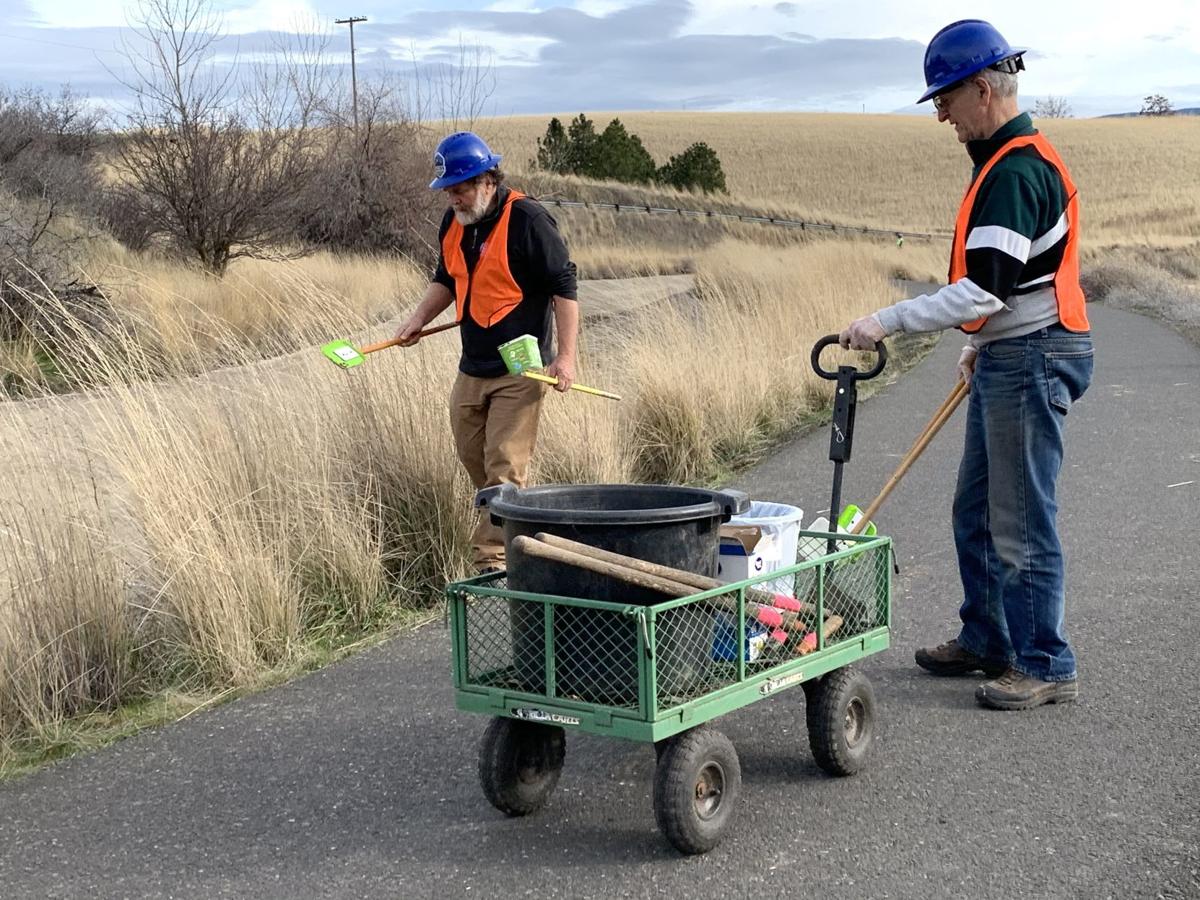 The Blue Mountain Land Trust Blues Crew collected 143 pounds of dog feces from 1 mile of paved trail at the Bennington Recreation Area on Friday. The U.S. Army Corps of Engineers provides Mutt Mitts and garbage cans, with a plenitude of signage as to why dog walkers should clean up after their pet. 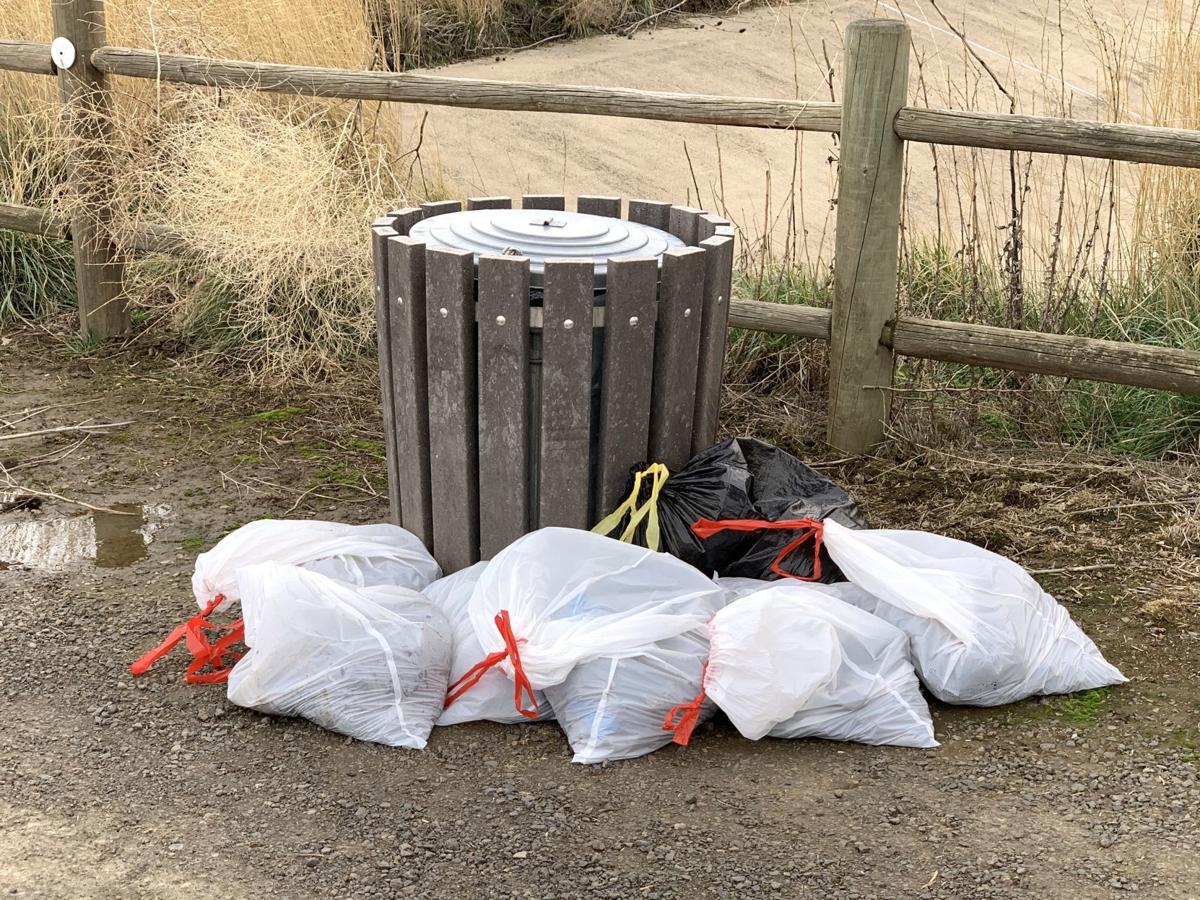 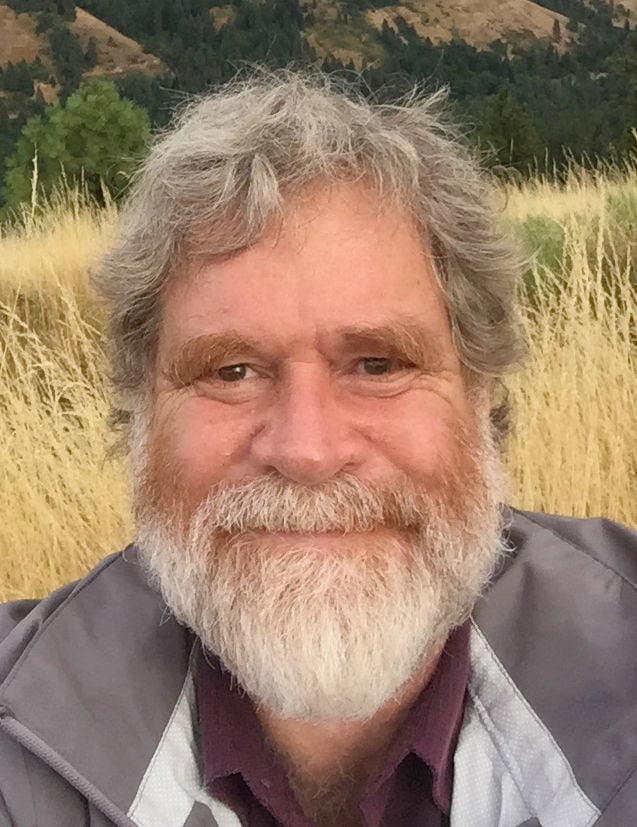 The Blue Mountain Land Trust Blues Crew collected 143 pounds of dog feces from 1 mile of paved trail at the Bennington Recreation Area on Friday. The U.S. Army Corps of Engineers provides Mutt Mitts and garbage cans, with a plenitude of signage as to why dog walkers should clean up after their pet.

That joke worked for the six Blues Crew members, accompanied by Dillon Benitez of the U.S. Army Corps of Engineers, picking up dog feces on a 1-mile stretch of the Bennington Lake Trail System on Friday.

We weren’t exhausted or in foul moods, but we were fairly stunned at the amount of material we were finding. Comic relief hits an exasperated nerve to reduce tension. We laughed out loud.

You probably had to be there.

There is nothing inherently funny about dog poop, although if you Google it, you get 4.6 million hits.

Jokes revolve around how cute dogs are, how loving dogs so much is acknowledged as somewhat silly if not adorably absurd and how scatological humor is simply a part of our far-reaching ability to laugh at ourselves.

The scientific details of the truly dangerous downside of dog poop in our lives shows up in 16.4 million hits. Nobody can justifiably feign ignorance of the serious hazards.

The 2011 movie “Contagion” is now one of the most-watched shows on devices along with a few others that entertained us with the dangers of epidemics. With Coronavirus now in every other headline, the movie plots feel ever more unnerving.

Only the data sleuths of social media know how many billions of people are now searching for ways to feel safe from bacteria, viruses and disease.

Walking a dog is a terrific and safe thing to do. Dogs need to get out and enjoy themselves, and owners benefit as well. The trail is on-and-off leash, a great service to dogs and their owners, which amplifies the fun for everybody.

It’s those first hundred yards of so from the trailhead — yes, right where plastic bags are available to pick up poop — that is so instructive about human nature.

A large number of dogs released into freedom cheerfully dump right there before their pleased owners. A round trip by the responsible plastic-bag carrying owner to the garbage barrel would take a few minutes.

Nobody is counting exactly how many people daily walk their dogs on the trail, so the percentage of those who decided to let their dogs defecate without cleaning up after them is unknown.

Occasional efforts at enforcement are met with incredulity by dog owners. One person, when gently asked why he ignored the requested rule and did not pick up after his dog, replied with his own question: Why aren’t volunteers just assigned to pick up the material?

The question does beg for an answer. Which is: Because dog owners are asked to do so and should be willing to do so.

It isn’t rocket science that feeding dogs means they eliminate their waste. The signs requesting people to pick it up are everywhere. Doing so is a courtesy to others and respectful common sense not to mention an efficient and timely way to go about things and important for a number of absolutely serious civic and public health reasons.

Sidewalks of our neighborhoods, walked on by dogs and people who then enter homes and backyards, showed extremely high levels of bacteria, viruses and parasites due to pet defecation.

Public health is a huge concern as dramatically presented in the above-mentioned movie. Inside of what may appear to be benign droppings to a loving dog owner are real threats to children, older adults and anybody with a weakened immune system. They are a menacing, long-term contaminant to watersheds and, of course, unpleasant to see and smell for those who follow behind.

The Blue Mountain Land Trust’s Blues Crew, in their third year of trail restoration in forests and other recreation areas, chose to take on its first dog-walk clean up when crew member Czarnecki brought the disgusting situation to our attention.

More than one recent visitor from outside the area has remarked, “This would never happen where I come from.” The hope of the Blues Crew is that if we return the trail to its original state, our community will be inspired, once again, to respect its natural beauty.

A listing of nasty worms and parasites embedded in these bio-grenades by the trail may be less convincing than seeing handsome movie stars grieving and dying. So please watch the scientifically accurate movies about how public health succeeds and fails and epidemics are thwarted or launch. It is heroic stuff that always touches on the crucial importance of prevention.

Or just listen to the latest news as you walk your dog, weigh public safety versus bending over once or twice using that convenient plastic bag you got at the trailhead and practice comic relief.

Terry Lawhead worked for the state of Washington in rural community development and lives in Waitsburg. He is a member of the Blue Mountain Land Trust’s Blues Crew.