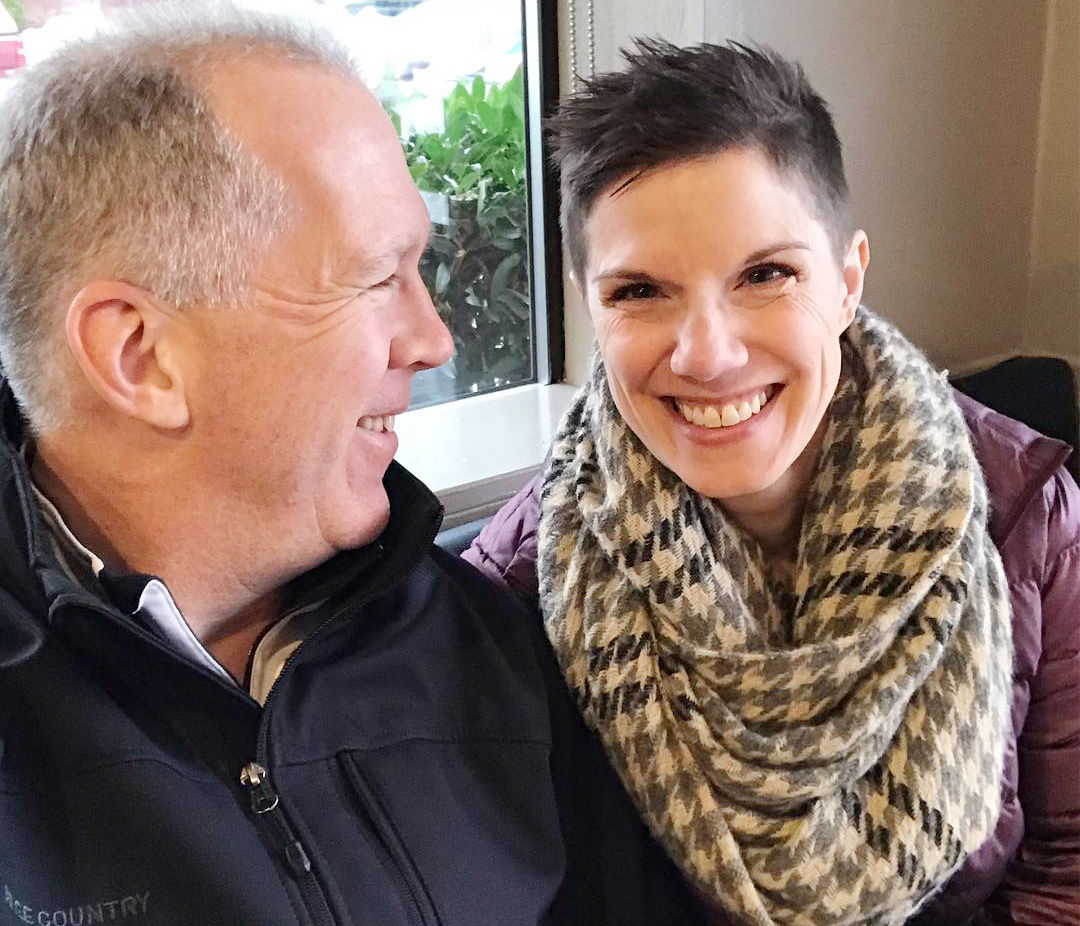 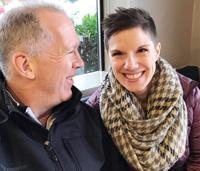 In Joe Cooke’s youth, his father nurtured what became a lifelong love for skiing — and motorcycling.

In Joe Cooke’s youth, his father nurtured what became a lifelong love for skiing — and motorcycling.

EDITOR’S NOTE: Walla Wallans Joe Cooke and wife Katie Christianson blog in their CaringBridge journal about life since his Feb. 21, 2018, diagnosis with multiple myeloma, or bone marrow cancer. Joe’s final test in January 2019 indicates no sign of cancer in his bone marrow, down to the molecular level.

The gifts we give

I was pretty certain that I had said everything I needed to say about Biker Joe v. the Multiple Myeloma.

I did not beat cancer, nor did I succumb to it. It is a part of me now, buried back within my bones where it belongs. I may very well die of something far more unexpected before that part of me wells up again.

We went to the edge of death, and were rescued. In the ancient mythical motif of storytelling, we went through the stages of separation, trials, and homecoming. Thus, a natural end to the story. Not cured, but given a reprieve.

So why am I here again on this page? Mostly because I am a writer, and the writer within me demands that I write.

That’s what makes me a writer — not novels or nonfiction works that sell megamillions, but writing. I am a writer because I write. It took me a long time to understand that. I’m still learning to accept that.

My father loved to brag about my law degree and my accounting background. We’d be out golfing and that’s how he’d introduce me to the other gentlemen in our foursome.

Mother openly despised my passion for writing, even though she herself strove to write, to make meaning of her life and her experiences on the page.

Dad was less overt about it, but he never mentioned my writing as something important that I did. He never read any of my work, as far as I know. That’s fine.

One thing I’ve learned is that family is not tribe. I am a member of the Cooke family, but I belong to the tribe of writers.

That is not to say that my father does not see me. In his own way, he does.

When I was 12, I came into the family room on Christmas morning to find a Honda Mini 50 sitting on a 3 by 5 piece of cardboard next to the Christmas tree.

The multicolored light from teardrop-shaped incandescent bulbs with pressed aluminum reflectors gleamed off the freshly painted fuel tank, restored to its classic yellow and white by my father’s industrious hands. I rode that bike almost every day after school, and every weekend.

When it ran out of gas I rolled it over to the Esso station just across the highway from our farm and filled it for eighty cents. It’s only been in these later years, over a quarter of a century later, that I realize what a sacrifice he made.

My parents didn’t have much money back then. Dad worked for the Production Credit Association and mom taught middle school.

But it wasn’t the money he spent to buy the little used bike and to fix it up and get it running, it was the fact that he must have endured mom’s quiet wrath. She considered motorcycles to be “hellish machines” and that they would be the death of me. She didn’t want to see them, hear them, or talk about them.

Same with skiing. You must know by now, if you’ve been following any of my story, that I love motorcycles and I love skiing. When I was a kid, I took those things for granted. I didn’t really appreciate them until I gave them up for years and years, and felt them still tugging at me, every day.

When I’m up skiing now, and I see the non-skiing parents sipping coffee, reading a book or chatting with another parent or staring out the window, I see my father, sitting in the lodge at White Pass, watching and waiting.

It was a two-hour drive from our house, up into the mountains, in a Ford station wagon with rear-wheel drive. I’m sure he had to stop and put on chains many times while I sat in the back, waiting. He bought me gear at a yard sale. Leather boots. A pair of old Head skis that were too long and made with a rigid steel core for speed but not so good for turning.

He had no way of knowing back then what a gift that was to me, and I was too young to appreciate him or his quiet way of being.

When I ride, and when I ski, I lose myself in the moment. I am focused and present and complete.

Was it the gifts that shaped who I am now today, or was it him? It feels like those things that I love to do and experience now, that are so much a part of me, that define me, are like my cancer.

Genetically locked into the very center of my being. Again, mom hated even the thought of skiing. She was deathly afraid of any sports; afraid I would get hurt. Her desire to protect was fierce, and must have come from some deep wound, but no one ever talked about that. She loved me in her own way, just as my father loves me in his.

My father is dying now.

On Monday we received a text from my sister informing us that dad had fallen during the night. He was OK, but they were taking him over to St. Pete’s emergency room just to check him out.

They sat in the emergency room for a while before he was able to be seen. At noon they decided to admit him in order to give him some fluids and to have his checked out by a cardiologist.

His blood tests showed elevated enzymes that could have been a result of the fall, or that could indicate a possible heart attack.

At 3:20 the hospital staff were weighing the risks and benefits of an angiogram.

At 4:36 my sister sent this message: “Drs. say nothing more to do. Dad went downhill fast. Any more intervention too risky. Comfort only now. May only be hours.”

At 4:44 Katie and I were in the car heading to Olympia. We arrived at the hospital at about 11 p.m.

St. Pete’s occupies a sprawling campus just south of the state capitol building. The wing that dad had been moved to looked like it had been built in the ’50s, clean but not modern.

He wasn’t hooked up to anything. Just a catheter and a hep-lock at his collarbone that looked like standard hospital protocol. No IV drip. No oxygen. This was hospice care. Some morphine and maybe some Ativan to keep him comfortable.

When we got there, he was sleeping but a bit agitated because he was due for some meds.

My brother, Gary, was there, and his daughter, Kendall, and her mom, Penny, who spent so many loving hours caring for my mother in her final days, and both of my sisters, Lee Anne and Mary.

I would have loved for dad to be able to spend his last days on the farm, in the house that built with his own hands from a kit he ordered from Sears. His 40 acres was the last bit of land left from his parent’s estate.

The rest of it, divided up between him and his two brothers, had been sold off and divided up some more and developed, but that little 40-acre piece he’d held onto and turned it into a Christmas tree farm.

In the ’70s, he and mom had added a second living room onto the back of the house, with floor-to-ceiling windows in the shape of the prow of a ship. We still call that the new room, even after all these years.

Mom passed away in that house, with the kids and dad gathered round. July 25th, at 10:50 p.m. I was holding her hand.

But, for dad, who labored his whole life building that dream, we just couldn’t make that happen, for lots of reasons, but Lee Anne got him into a nice “senior living” establishment in Lacey — “Bonaventure of Lacey: a beautiful and serene retirement, assisted living and memory care community near the Indian summer Golf and Country Club.”

The plan is to get him transferred out of the hospital and back to Bonaventure for his transition from this world to the next.

Katie and I made a tough decision to come home and wait here. We said our goodbyes.

I love my dad, and I think he knows that, even though we didn’t always see eye-to-eye, and our conversations were often forced and stiff, more about weather and kids than anything else. Rarely, well, never, deeply substantive. He both knew me and did not know me.

Really, I have no idea what he thinks of me and my odd decisions. He thought I’d be a banker or a tax attorney.

Instead, I work with nonprofits and social service organizations. I write books. I play music. I sing and dance.

He and I have almost nothing in common. He loved the earth and trees. I can’t tell a Scotch pine from a spruce, although after a lot of repetition, I do think I can recognize a blue spruce, and a Douglas fir, so maybe I did learn some of my father’s language.

We will pack up my kids on Friday and head back over, unless he passes away between now and then. I think that is likely. His kidneys have failed, and he is not eating or drinking.

I think Mary was able to dribble a little bit of ice cream into his mouth yesterday, but that’s about the extent of his fluid intake. That’s all he can do. His body is shutting down. His time on earth is done.

On the way home from Olympia yesterday, I got an email notice that Katie’s favorite college teacher’s husband had died unexpectedly in his sleep. She had just retired last year.

A friend of mine from high school passed away on Christmas Day after a yearslong battle with cancer.

Another friend was working with her newly-found soul mate on their new home when her fiance suffered a brain aneurysm and died in her arms.

Death is the inevitable end of all our stories.

Katie was talking to my father. Her voice was soothing. She had one hand on his shoulder.

She talked to him about me, about my kids, and about the legacy he had built, a legacy of people, of lives he had created and shaped, and I remembered, as she spoke, something I heard once, that God’s gifts to us are the skills, and talents, and abilities, and experiences that make us unique in all the world, and that our gift back to God, and to the universe, is to use those gifts to make the world a better place.

I think my father has done that, and I can ask no more than that now of myself. This then, is his final gift to me. To continue to live, and to live fully and to serve and make the world better, just one day, one activity, one moment at a time.

POSTSCRIPT: Joe flew to Seattle Wednesday at 1:30 p.m. to be at his father’s bedside. He wrote on Facebook that his father died while he was inbound.

Joe Cooke is a writer who teaches business courses at Walla Walla Community College. He is a founding member of Willow Public School. When he’s not busy fighting cancer, he rides his motorcycle, skis and plays guitar.