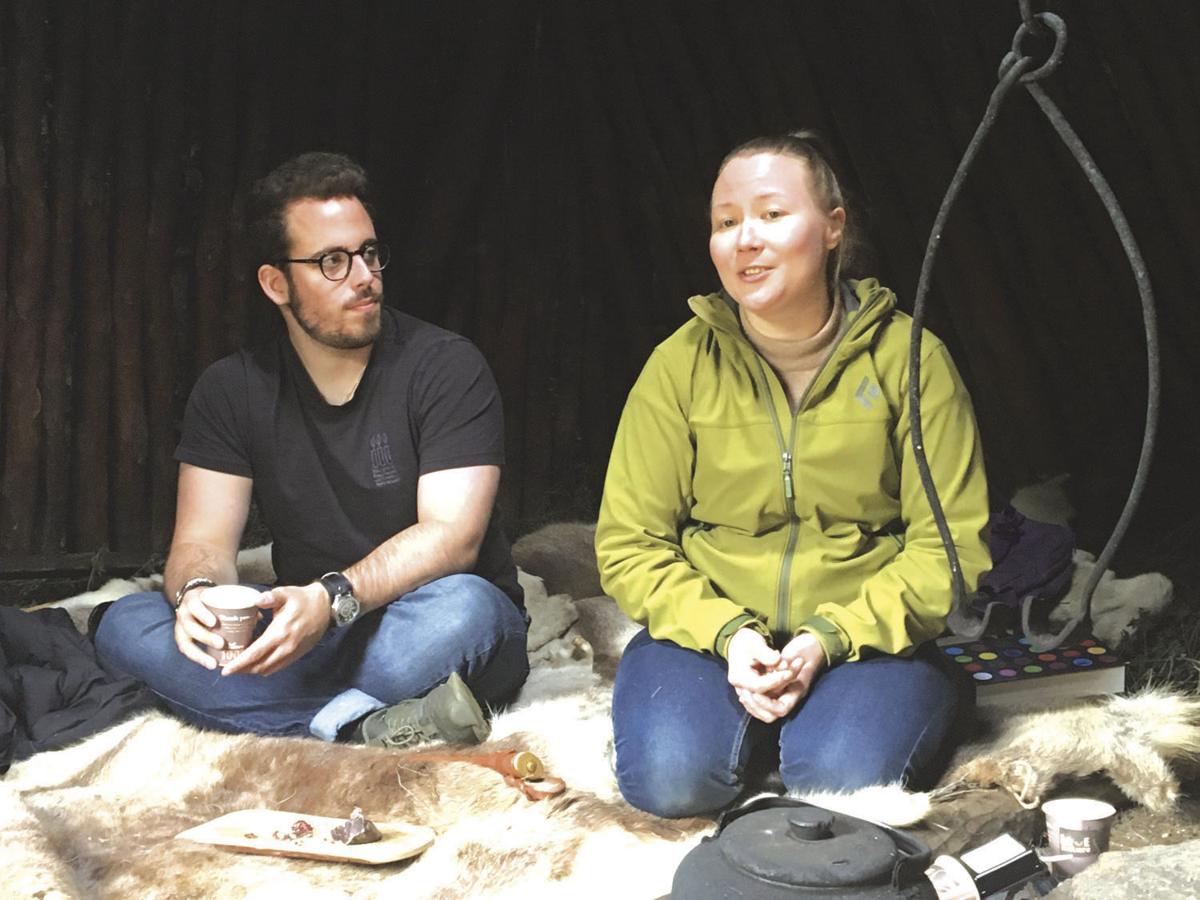 Aili and a friend in a traditional Sami house in the Arctic. 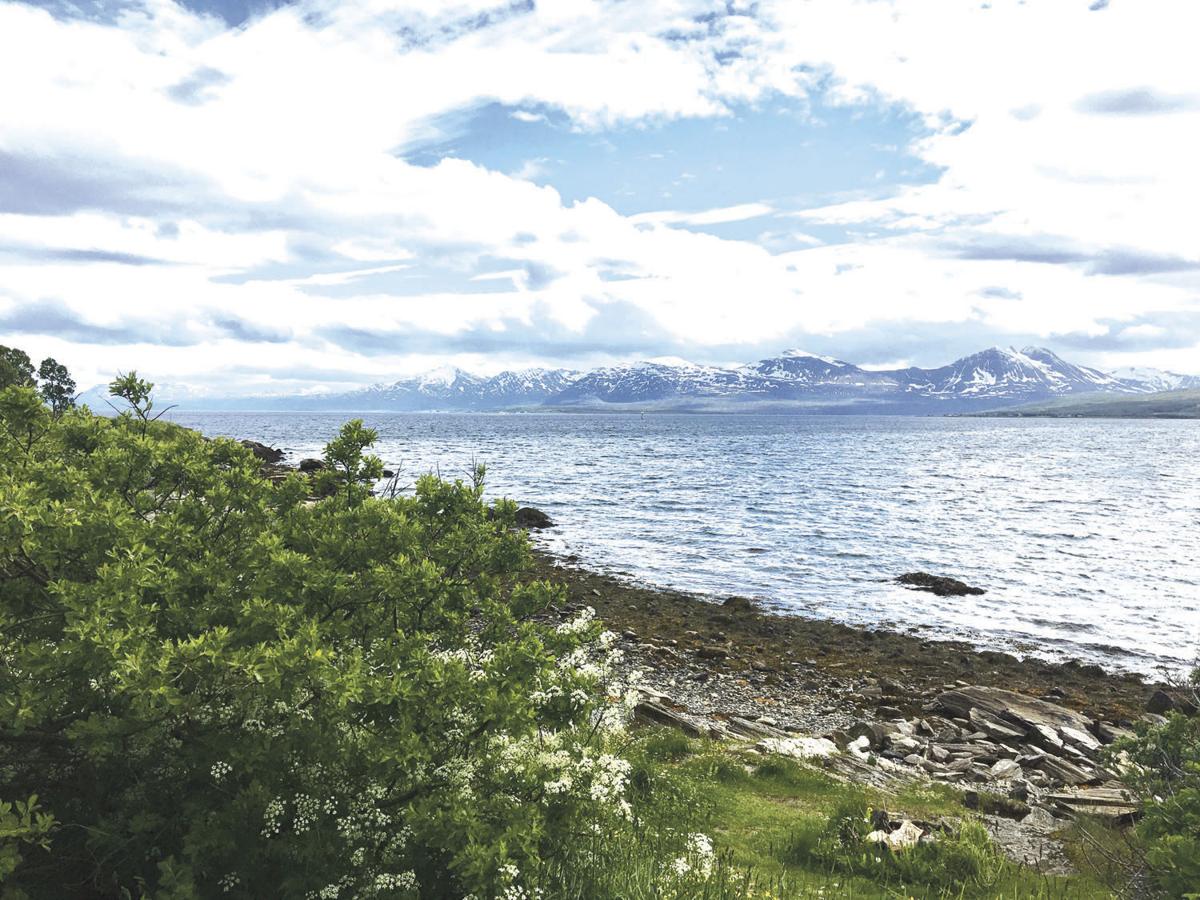 The museum’s beach, with late June snow on the mountains.

Aili and a friend in a traditional Sami house in the Arctic.

The museum’s beach, with late June snow on the mountains.

On the far northern coast of Norway, 100 yards from the front door of the Tromsø Museum and up against the birch woods, you come across a grass- and flower-covered mound with an unexpected diagonal shape on top tilting up toward the sky.

Walking around to the side you may find a rustic but welcoming open door of a guati. On a sunny afternoon with an Arctic chill in the air, we were greeted by the smiling faces of a handsome couple, he a classic bearded Scandinavian with a sculptured profile, she an indigenous Sami with a lively face and graceful movements that make one recall Inuit strength in the face of a challenging environment.

She introduces herself as Aili, explains brightly that her mother is Sami, her father a Norwegian professor at the university, and that she has worked at several museums. The handsome young man is clearly a friend who is keeping her company during her shift of sitting around the cooking fire explaining Sami life to visitors.

We join them on the reindeer hides, which are cushioned underneath by birch branches spread on the ground. The domed ceiling is made of curved willow branches, on which slabs of wood and turf are piled for insulation. Our hosts pass around tasty bits of roasted reindeer. Aili points out that the seating arrangement is correctly traditional, with the couple ensconced behind the fire, the guests by the door, and the children, if there were any present, off to the sides.

The air is a little smoky, a slight problem that wouldn’t exist if the door were closed and the side openings at floor level could draw properly. The portable version, we are told, was invented earlier than the turf hut, and, by general consensus, is much like a teepee. Just as some North Americans moved around pulling their house and goods on a wooden platform later called a travois, the Sami did the same over the snow using sleds and a string of two or three reindeer.

These similarities convince some Sami that they are related to Indians, that there was migration across Siberia and over the ice bridge at the Bering Strait, though anthropologists say evidence is lacking, and that a similar environment may be the explanation. Sami traditionally herded cattle, the polar variety, and sold the meat. Dressed in brightly colored home-woven clothing, and wearing four-cornered hats, Sami men were also essential in polar expeditions, making use of what has been called their “snowhow.” Now only 10% percent of the Sami are herders. The other 90% work in jobs spread all across the economy, from commercial fishing to journalism.

Another shared experience with Native Americans is that Sami children were for years required to leave home and attend boarding schools so as to become thoroughly Norwegian. Now children live at home and are taught in schools conducted in their first language, particularly in the north, where there is the highest concentration of Sami. It is even possible to take university courses focused on the language itself.

The governmental setup is unlike the American situation because there are no tribes. Instead, there is an “advisory” Sami parliament for the whole country. However, it doesn’t have the same political jurisdiction and clout as sovereign Indian nations here, in part because there are no casinos in the country. Norwegian law strictly prohibits all organized gambling.

There is a political movement, known in part as Sami Tid, seeking to strengthen ties among Sami in Norway, Finland and Sweden, all of which share borders with each other in the north. Finnmark is, in fact, the name of the northern region of Norway, and the Finns’ name for their own country is Suomi.

The Sami traditional way of singing, which is still alive after thousands of years, is a throaty vocalization known as yoik. In ancient times, it was the way names were given, specially created for each individual. Yoiking was also used when speaking of animals, designating a whole species and based on the sound it typically makes.

Although the songs that weave it into the melody are now completely nonreligious, it was for many years forbidden to be sung in churches. Recently, after a big controversy, a concert featuring yoik was sung in one, and it is becoming increasingly popular in Norwegian musical circles. A band with a Sami singer has this year won the all-Europe television country music competition.

Americans are also surprised to learn that folk singer Joni Mitchell, who recently performed in Walla Walla, comes from a family with strong Sami roots.

The music for the Disney movie “Frozen” was composed by a Sami, and his choral piece “Donna nobis pacem” was performed last fall by the Walla Walla Choral Society. It was beautiful to hear and to be part of, especially the yoiking section performed by the director.

With his jazz skills, Gary Hemenway knows how to sync with a new groove that’s

both ancient and happening now.

Clark Colahan is a retired professor from Whitman College.