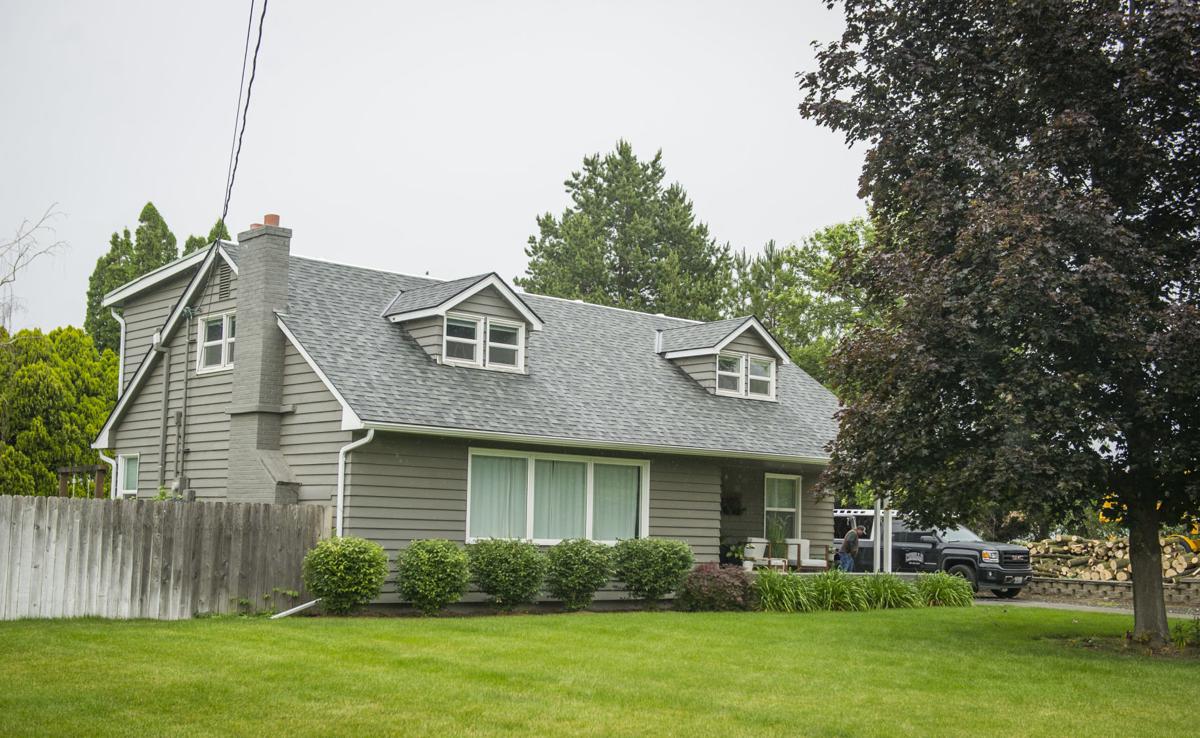 Above: The exterior of the Williams residence on Wallowa Drive. Opposite: The front door leads into the open living room with fireplace and the dining areas at 855 Wallowa Drive. 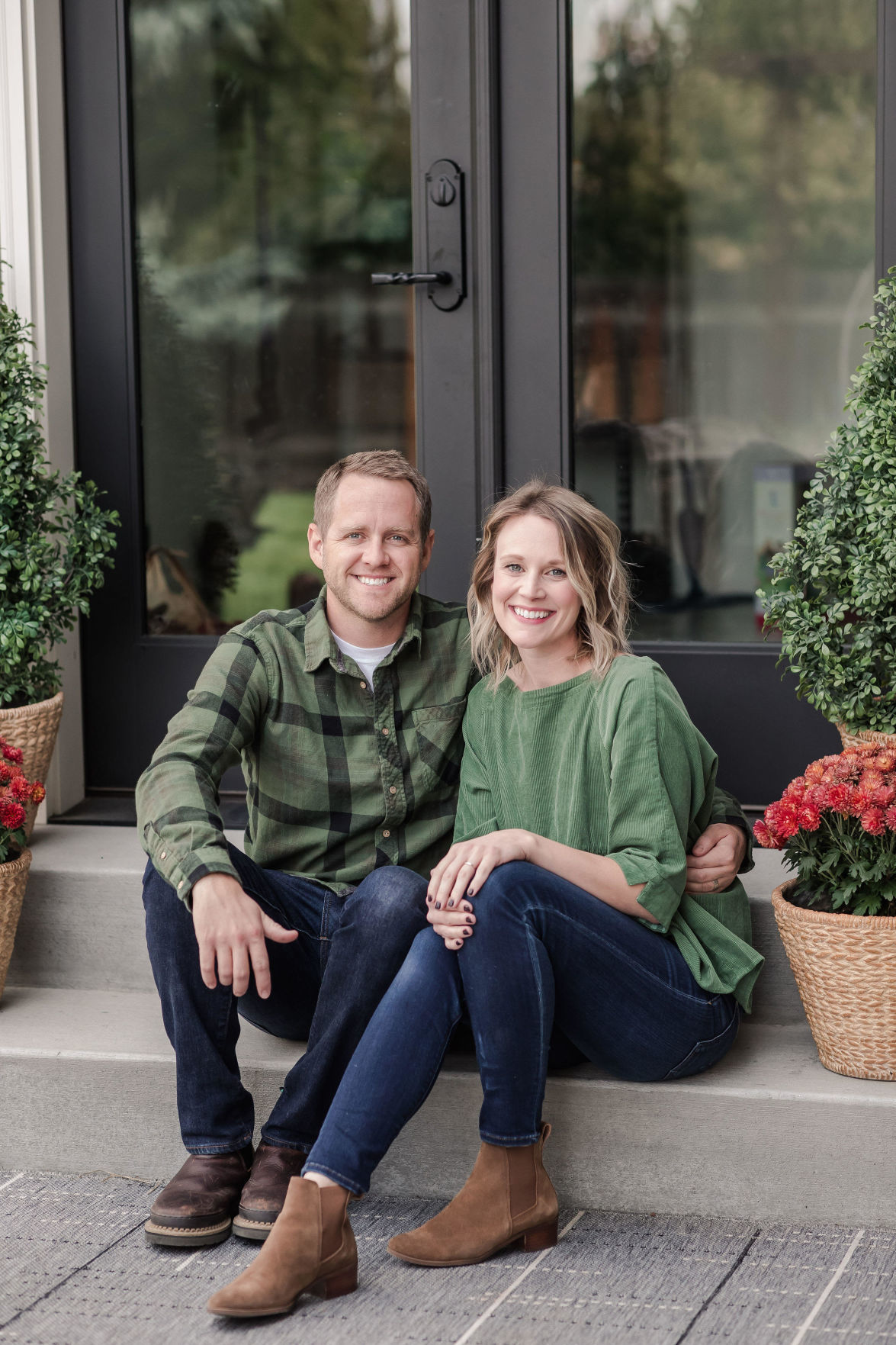 Kyle and Jamie Williams on the back patio of their home. Photo courtesy of the Williams family. 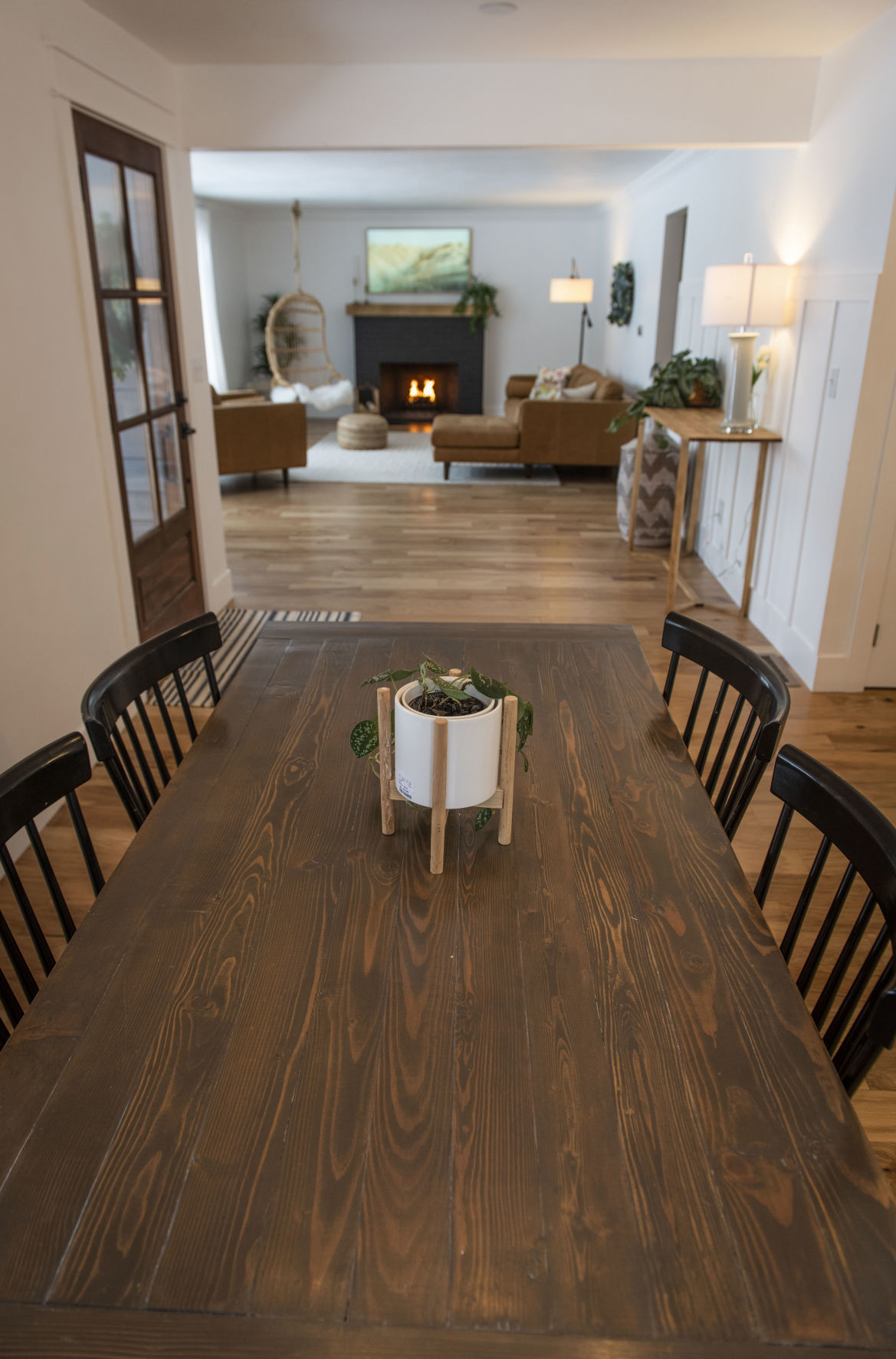 The front door leads into the open living room with fireplace and the dining areas at 855 Wallowa Drive. 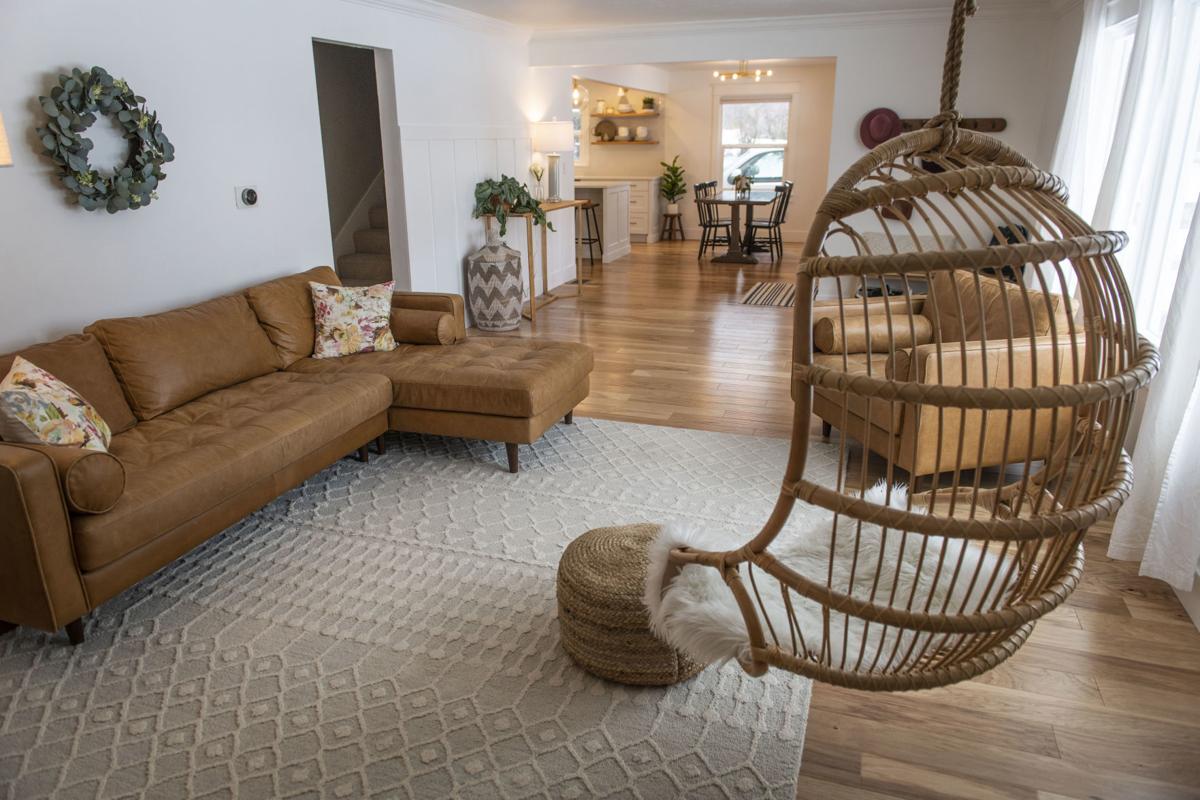 Above: The living room with a hanging chair and an open view to the dining area. Below: Kyle and Jamie Williams on the back patio of their home. Photo courtesy of the Williams family. 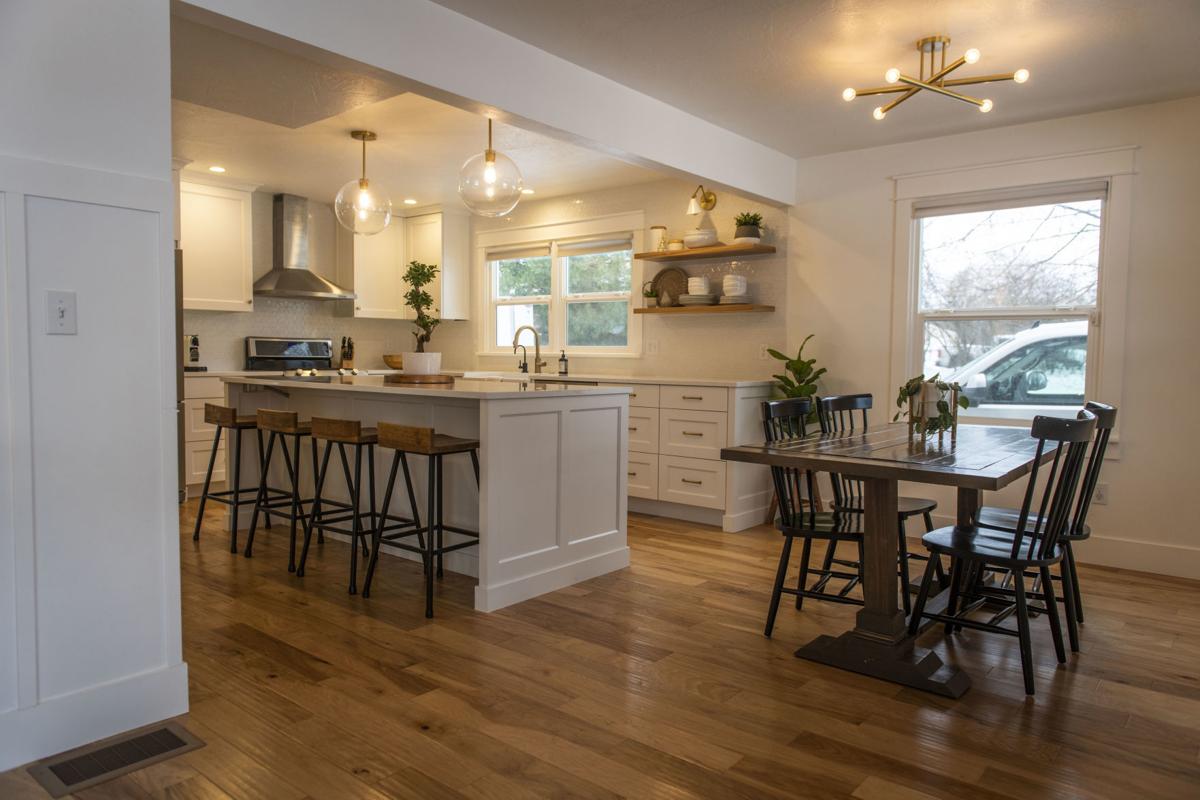 Above: The exterior of the Williams residence on Wallowa Drive. Opposite: The front door leads into the open living room with fireplace and the dining areas at 855 Wallowa Drive.

Kyle and Jamie Williams on the back patio of their home. Photo courtesy of the Williams family.

The front door leads into the open living room with fireplace and the dining areas at 855 Wallowa Drive.

Above: The living room with a hanging chair and an open view to the dining area. Below: Kyle and Jamie Williams on the back patio of their home. Photo courtesy of the Williams family.

Kyle and Jamie Williams are settled and thriving in their 1950s house at 855 Wallowa Drive.

They purchased the home in the summer of 2014 and immediately began work on it.

But relocating to this ideal place was a long time in the making.

Kyle and Jamie each had a history with this house. “We both grew up in this neighborhood,” Jamie says. “My in-laws used to live next door.” She remembers at a family gathering looking at their future home and thinking someone should fix it up. Later on, when they were looking to move back into the neighborhood, Kyle approached the homeowner and found she was ready to sell.

What drew them to this particular property was its huge potential. It has two stories with four bedrooms, two bathrooms as well as one bedroom and one bathroom on the main floor and an unfinished basement.

“The day we closed, we started renovating,” she says.“The first thing we did was replace the windows.” They were single pane and not very weather-resistant so they wanted to get rid of energy loss and keep the temperature comfortable. They wanted to keep the large windows for natural light but get rid of the air leaks. Then they put down laminate flooring and put up new sheet-rock everywhere.

It was a big project, even more challenging because they have children. “We took it in stages,” she says of the construction. After the main floor was more livable, they pretty much gutted the upstairs. “My dad used to own a tile business back in the day, so he helped us with the bathrooms, the tile and surround.

They painted the kitchen white to cover the bright yellow it had previously. Then new appliances were chosen to make a completely fresh start.

They didn’t do major construction right away, just enough to get by until they were ready to do the bigger projects and they worked it in stages.

Jamie would like a larger master bedroom but she says in a fixer upper you have to be willing to live with it.

Natural hardwood hickory floors were added. “It has no dyes and has natural color variations,” she says. It also hides dirt and scratches and maximizes the natural light from the large windows.

They wanted a lighter floor because it makes the room seem larger. The textured ceiling is also white. Everything that is white or just a light color looks clean. “It hides peanut butter and little fingerprints,” she says. “Like a white car looks clean.”

The house had lots of walls and doorways, so they took down entry doors and opened up the interior.

Jeff Winter was their contractor and they are very happy with his work on their home.

They added French doors out to the patio to connect the kitchen with the outdoors.

The kitchen and upstairs bathroom have quartz countertops from Fascinate Interior Stone and Tile. Jamie loves the quartz. “Zero maintenance,” she says.

“After it was livable, we started on the upstairs,” she says. This included new sheetrock and paint.They ripped out carpet, put in new carpet and new windows. Jamie has a comfy office upstairs close to a playroom for the children.

Then they began to work on the exterior: more new paint and a new roof.

The yard needed some attention, quite a bit of attention. “Back then it was just dirt,” Jamie says.

They had to kill off the weeds and trees on the other side of the lot. “It was really forested,” she says.

Outdoors they added a gas fire pit for enjoying the time spent on the patio. They also added a mud room/laundry room to keep the outdoors enjoyable. And the dirt outside.

The big kitchen remodel was the last major project.

They have some more things to address with the home, some in the laundry room and finishing the basement for the children as they grow up but they are settled in and comfortable. The huge projects are complete and there’s really no big rush to get started again.

Karlene Ponti began as Special Publications Writer in 1999, work includes Lifestyles, The Weekly and Business Monthly. After Wa-Hi, Ponti attended Whitman and is a UW graduate. Later she was ordained a Christian minister at CDM Spiritual Teaching Center.