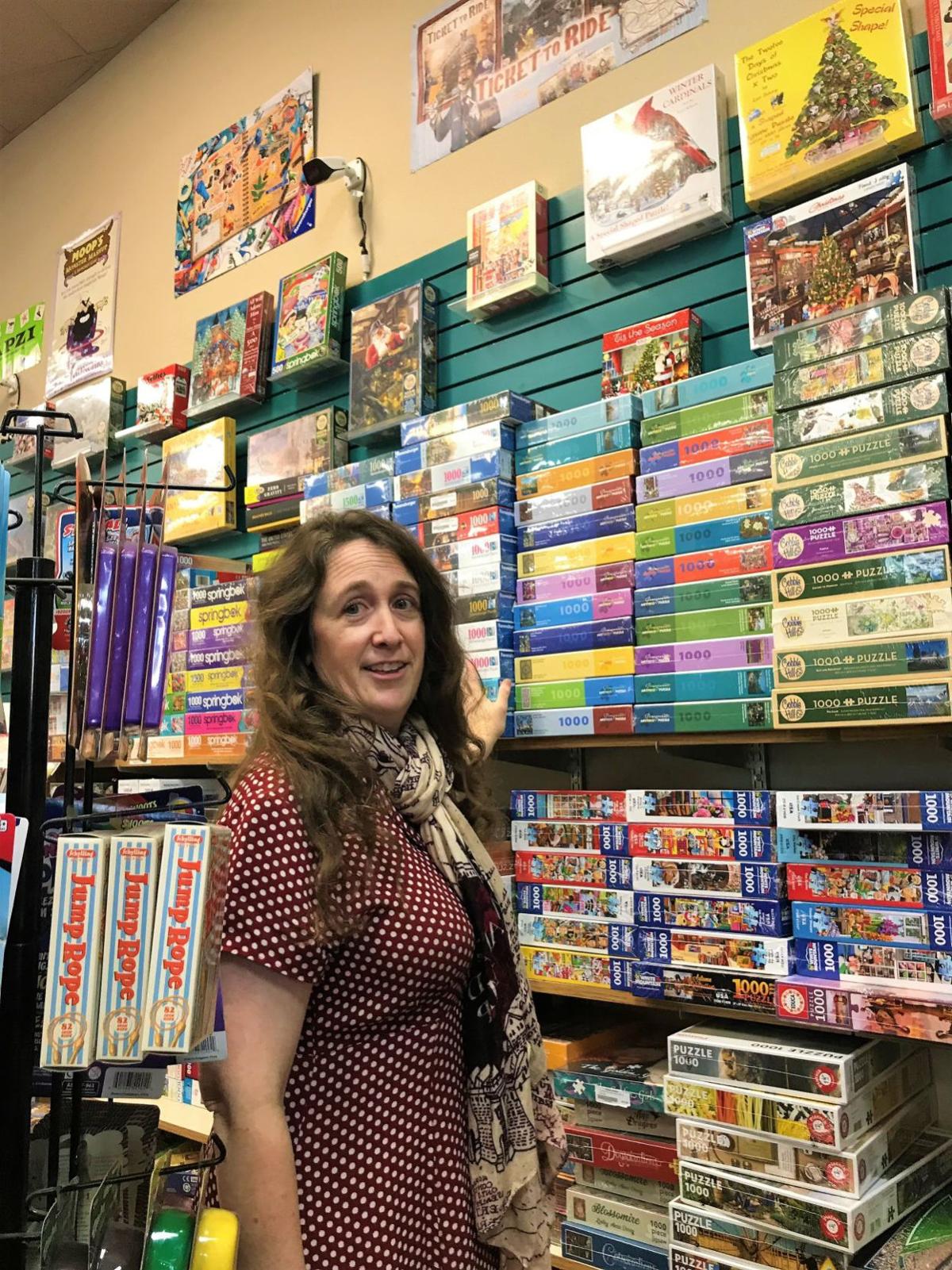 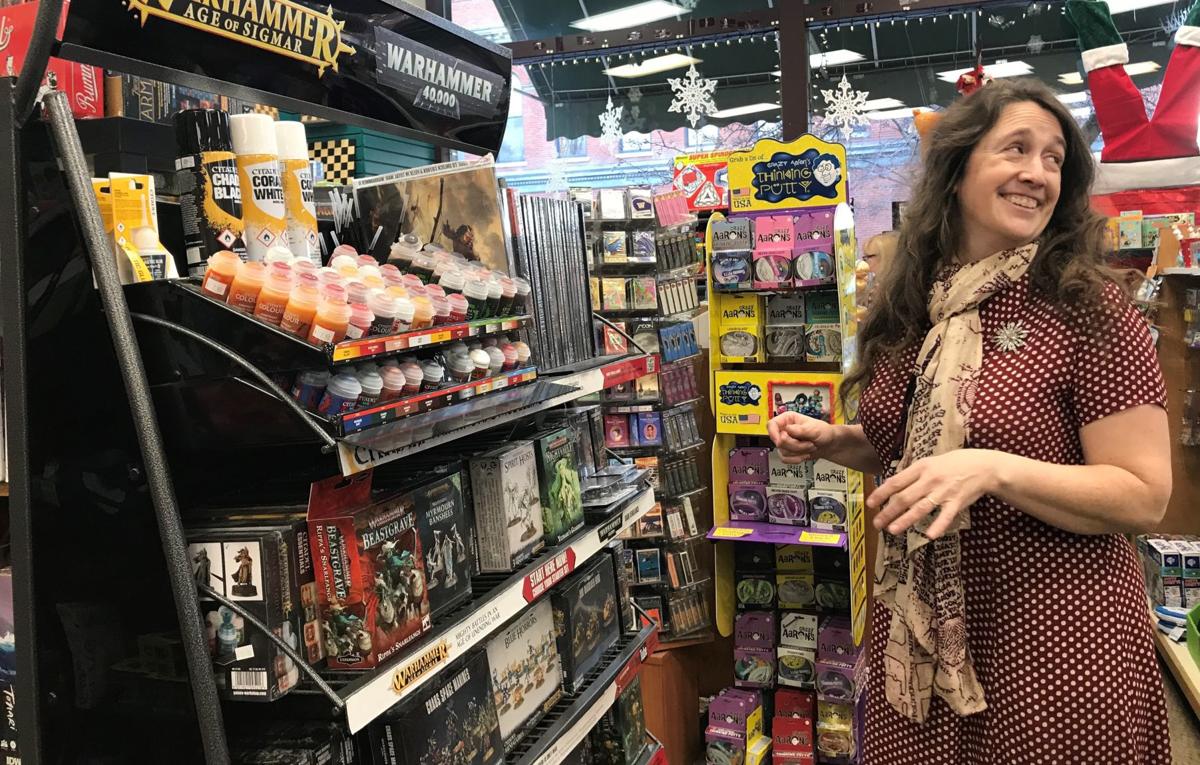 If those divots on your couch tell a tale of too much digital screen time, a buyer at Walla Walla’s Book & Game Co. can steer you toward plotting your own drama without advertisements and subscriptions.

Julie Aichele, 50, a self-proclaimed game “nerd,” works full time at the bookstore predominantly as its game buyer, her specialty of four years.

She sifts through national and international game-industry offerings, seeking the new and best of tabletop entertainment. More than 2,000 games now line up in a street-facing store corner, ranging from jigsaw and Sudoku puzzles to role-playing games (RPG).

Who is the energetic, coffee-drinking wizard behind this colorful allure?

Lifestyles: What makes you a good match for this retail metropolis of imagination, color, texture and challenge?

Aichele: I started out living out of town on a farm. I’m from a long-time Valley Italian American family. I’ve been doing games since I was a preteen and then was one of those nerdy role-playing Dungeons & Dragons kids. You do need to be well-rounded at the bookstore, so I obviously read, but I do tend to be nerdy. I like to please people. Finding just the right thing. I ask questions such as who are you buying for? What have your kids played before? Are the parents gamers? What’s the age and history of the recipient? Are they younger kids just learning? I like to help people get excited about the camaraderie and the aspect of people against the game — it’s a competition. Everyone plays games. I don’t coax though. I want them to always have a positive experience.

LS: How do you define and describe the dazzling variety of games in the store?

Aichele: The games are all non-electronic, from the handheld Jackpot or solitaire sold around the holidays to board games and card games covering different sections and categories of tabletop games. … Games are something you enjoy by enjoying one’s company — a good strategy game with each other. It has that social aspect you can’t get with social media.

In winter, we see an uptick in chess and the games Go and Mancala. Chess tends to attract adults past their 30s. Family games are more developed and begin starting with ages 7 to 8. Party games usually means for adults — Speak Out for example — and now, What Do You Meme? There are dice rolling games. Some are PG and there are some R-rated ones, Skip-Bo, Munchkin, and Arkham Horror cards, all with different dynamics.

LS: How do you compete for the millions of players gaming online?

Aichele: There’s an uptick (in analog games) because people want to unplug. Game night’s a time for enjoyment, to be with others or to be one-on-one and not get your nose stuck in social media or video games. There’s always fluctuation, but there’s a lot of people who don’t do TV as much as they do games with their kid, which is wonderful. It’s a learning adventure. It’s silliness, even though with a lot of family games geared toward people learning stuff, sometimes it’s just to have a good time.

LS: As the game buyer for B&G, how do you know what to order? Tell us about your products here versus customers finding games elsewhere such as online.

Aichele: I do a lot of reading, a lot of research, primarily in January and February, doing preorders months in advance. Sales reps come in almost weekly. They represent good companies and are exclusive to certain games. Some companies, whatever they turn out, I know I can depend on; they’re well thought out, well researched like Fantasy Flight, which produces new games every year. Plus, of course, there’s going to market in Las Vegas for four days. Sometimes Reno. There are trends and the nerdy stuff. You must stay on top of it, figuring out what’s going to be The Thing. You must have a crystal ball.

Take Wingspan for instance: It’s a birdwatching game, a beautiful game. And none of us thought about it. I put one on order last February. Then the New York Times did a review on it, and everyone was asking for it, but we didn’t get the game in for months. For “Wingspan,” the price was $55, that’s a good deal. Online they were selling for $85, people jacking up the price after multiple media coverage. And sometimes vendors demand exclusive rights to selling a certain game. That’s the most frustrating part of my job.

LS: Who are your customers?

Aichele: Mostly locals, we do requests and even deliver here, but tourists too. Sales are about 50-50, gifts versus for themselves. An older youth, ages 19 on up, might play a game called Warhammer. It’s a game of strategy, role plays, usually guys. Girls are starting to catch up in their interests, though, with Dungeons & Dragons, for one. Males tend to like strategy games. Females lean toward adventure games and card games. There are large adventure games where you can play with eight to 10 people if you ease them into the genre. But boys will play almost anything.

LS: Are there chief benefits to playing games?