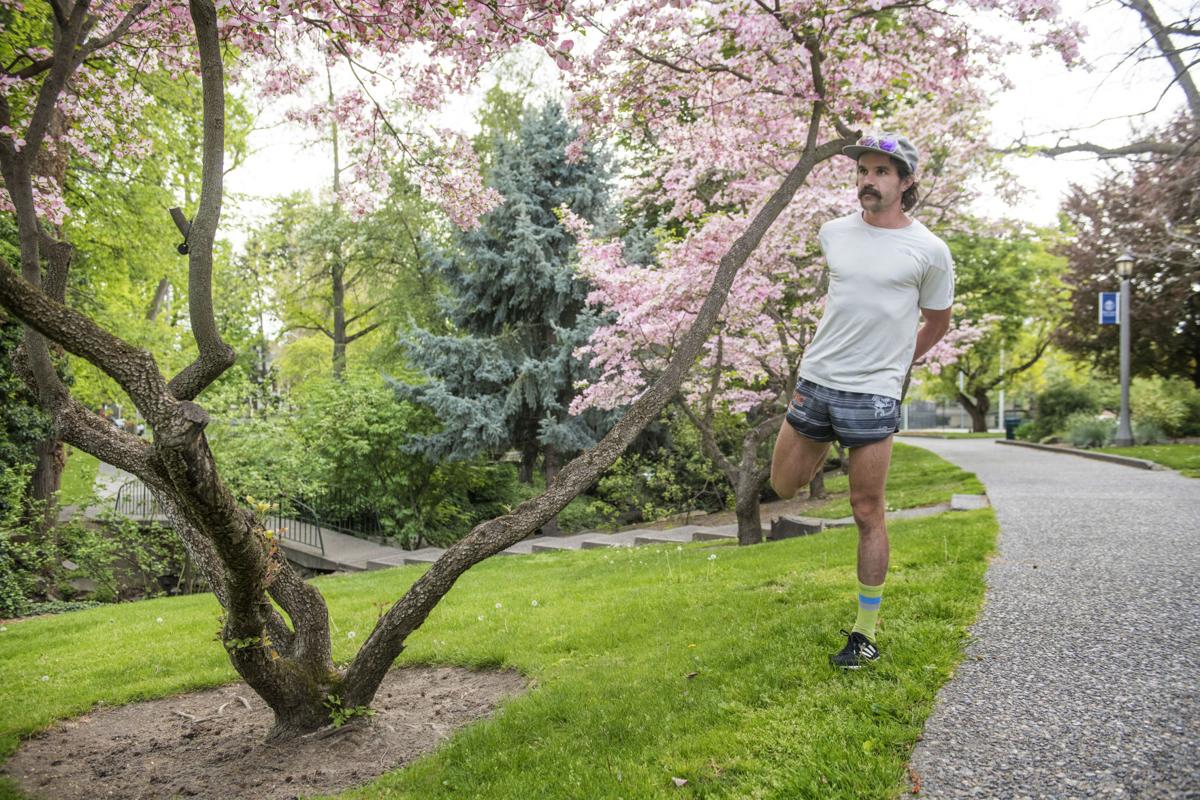 Drew Macomber stretches under a tree on the Whitman College campus before a training run recently. 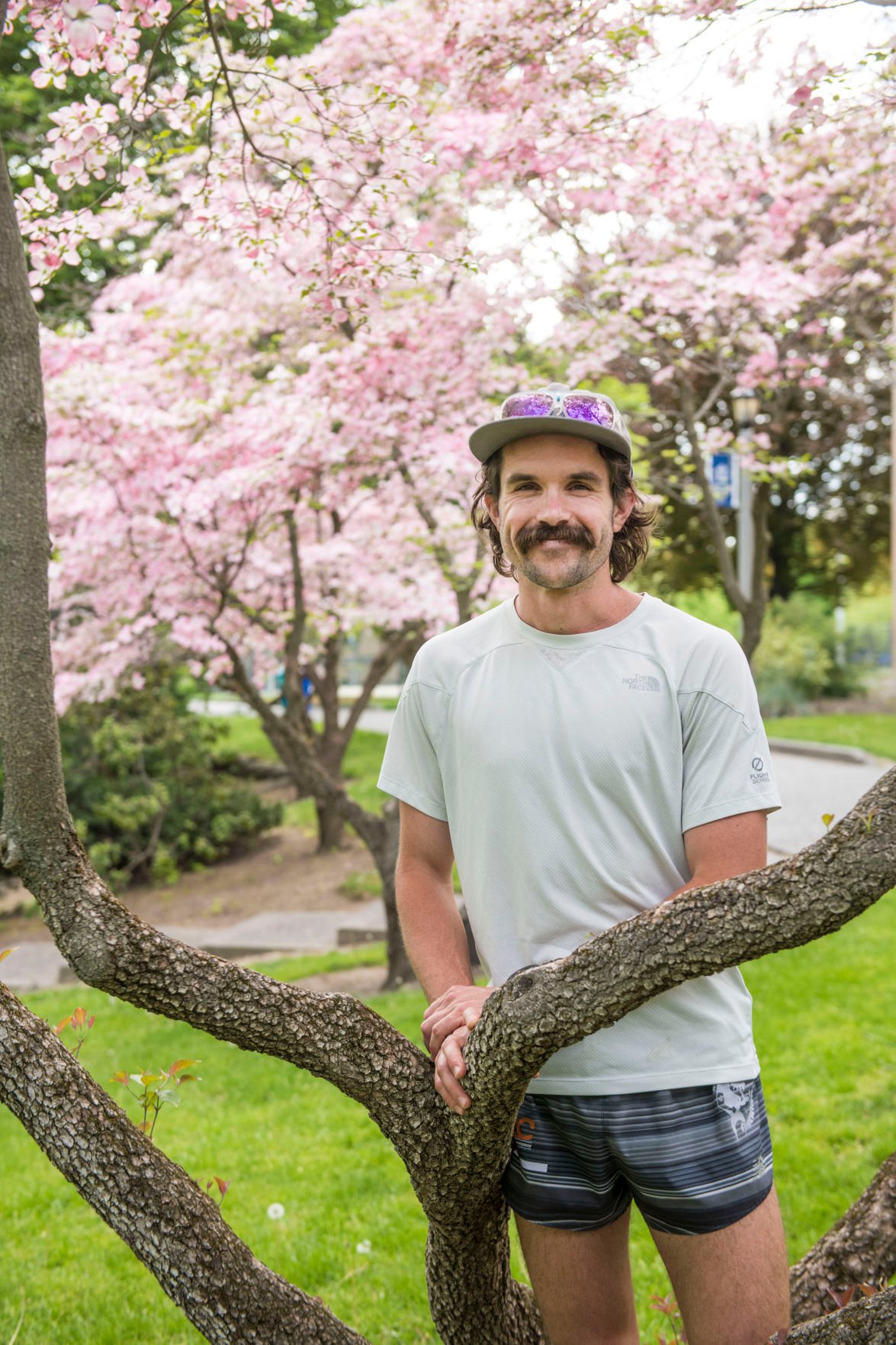 Drew Macomber is an ultrarunner living in the Walla Walla Valley. 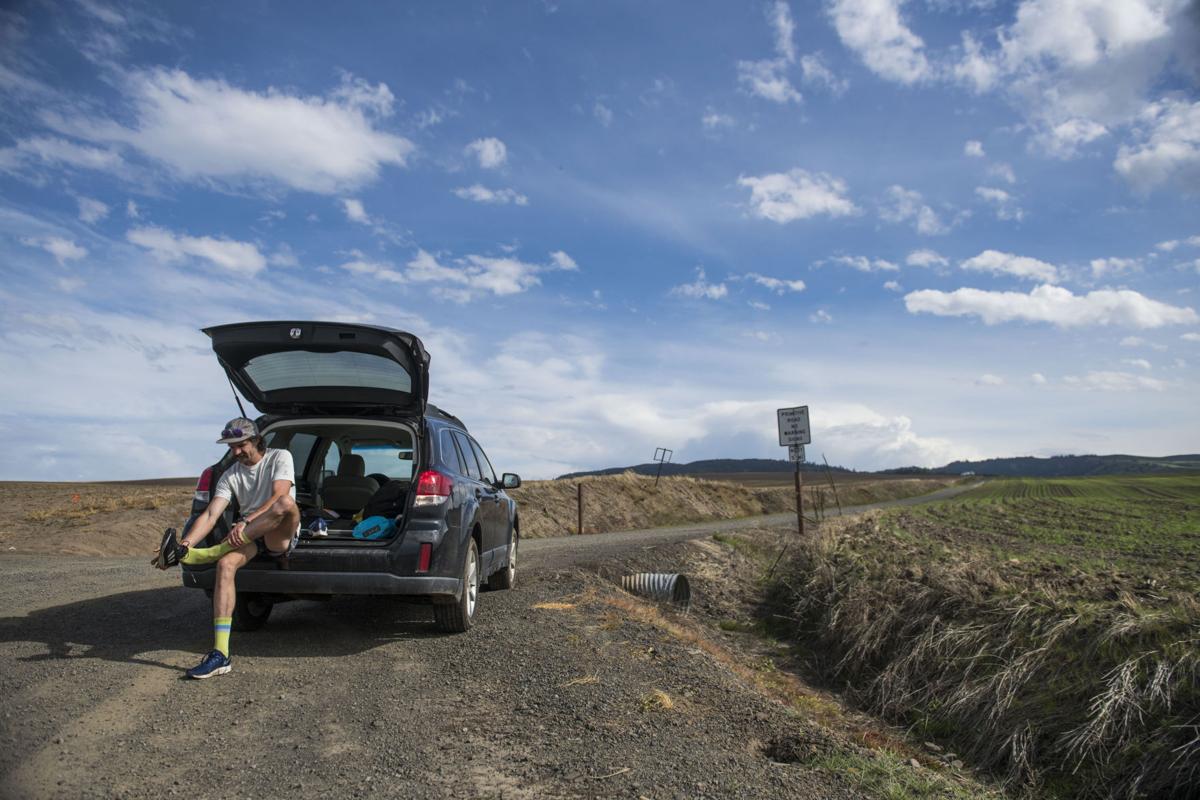 Macomber gets on his running shoes before a training run around the Valley. 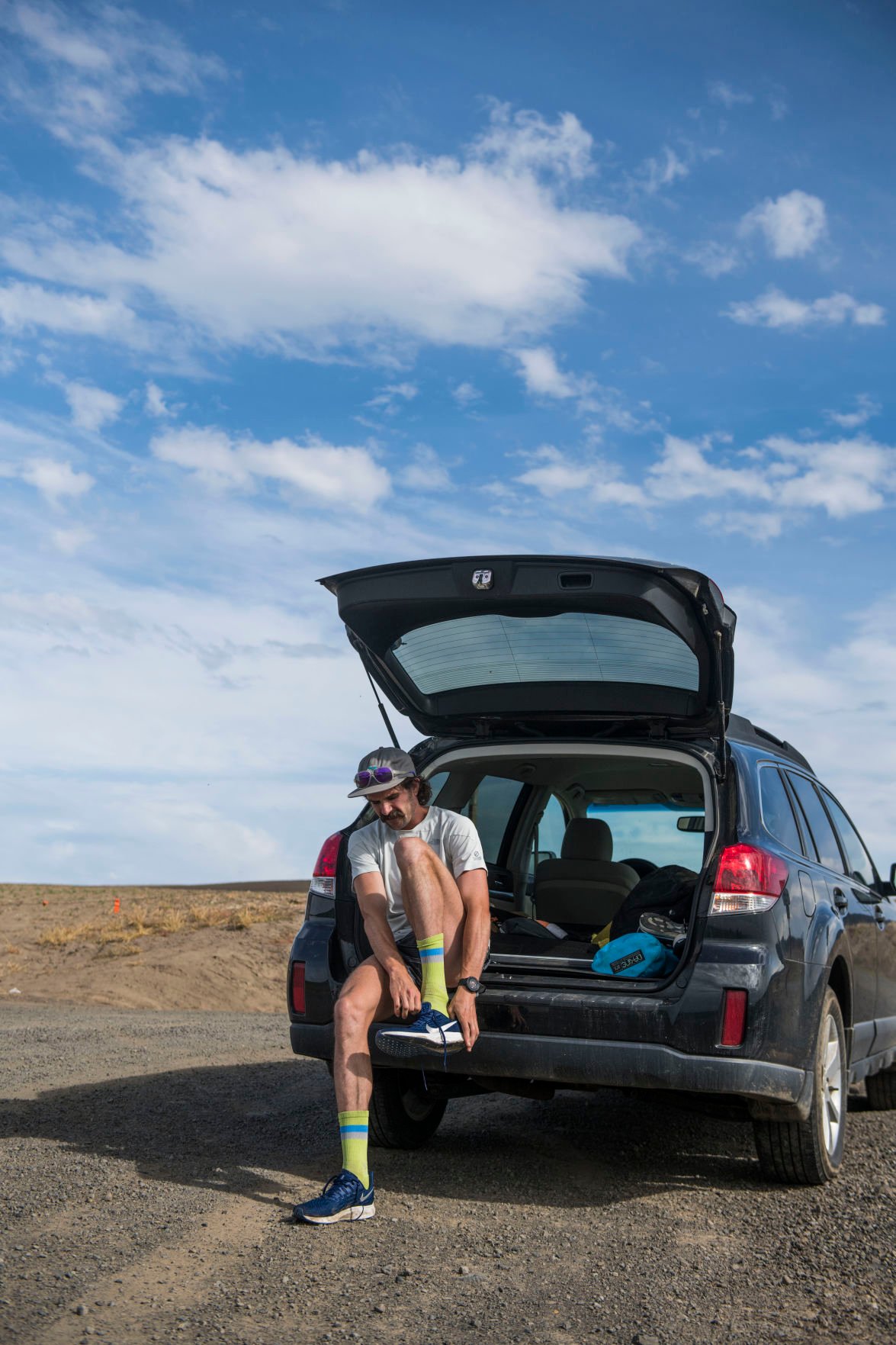 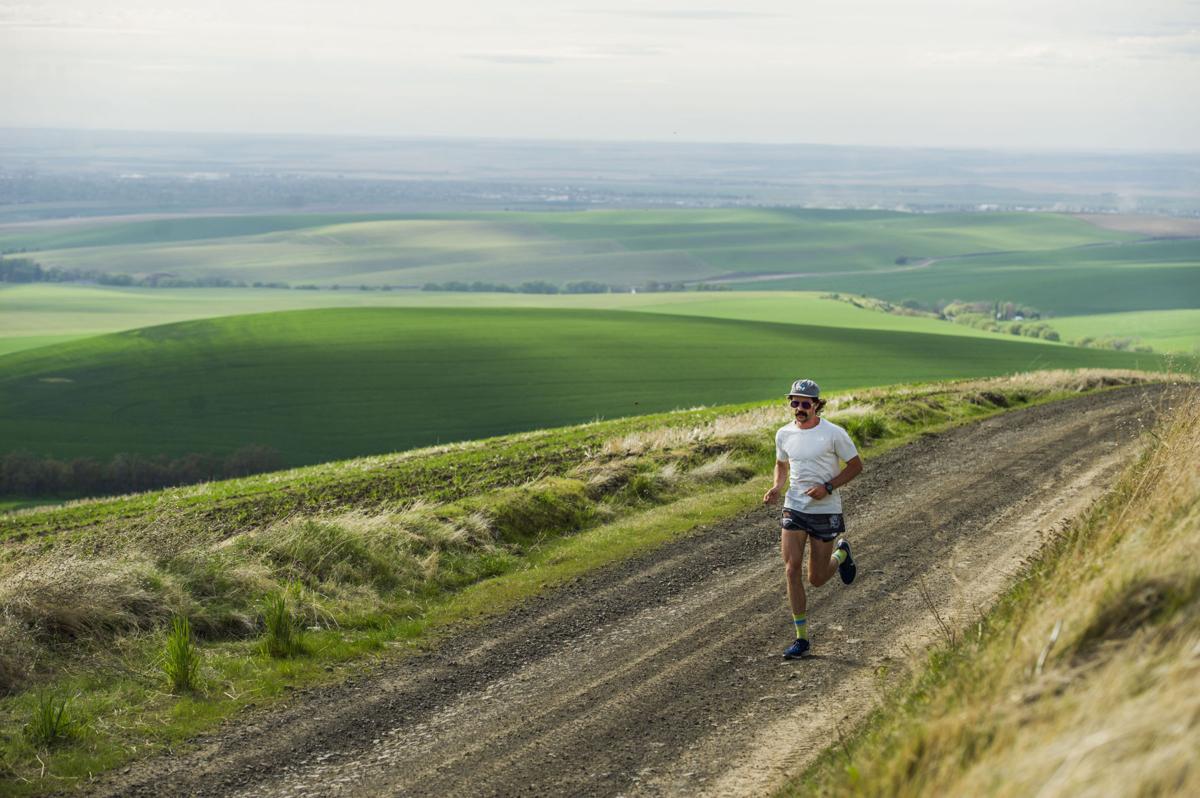 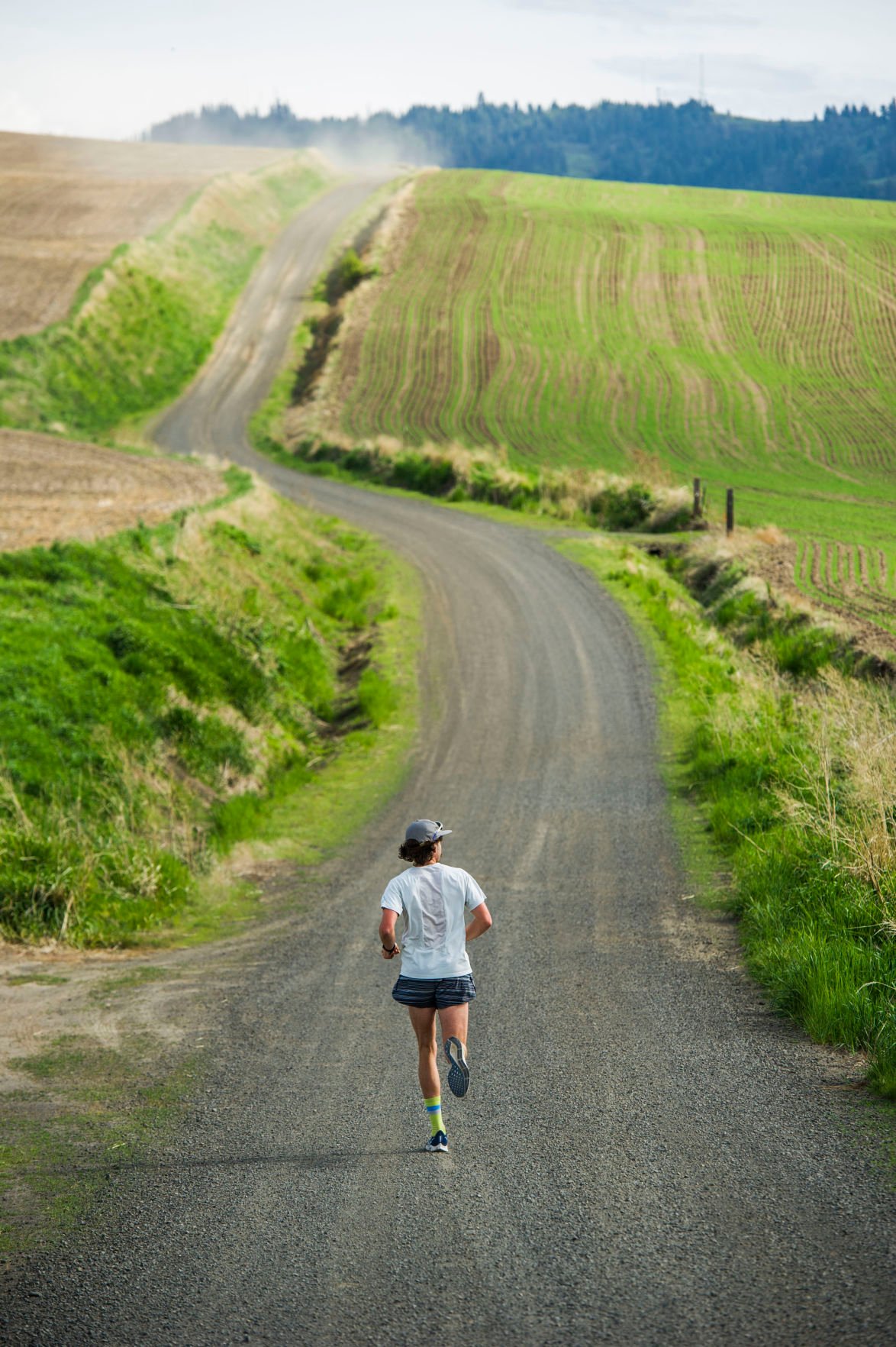 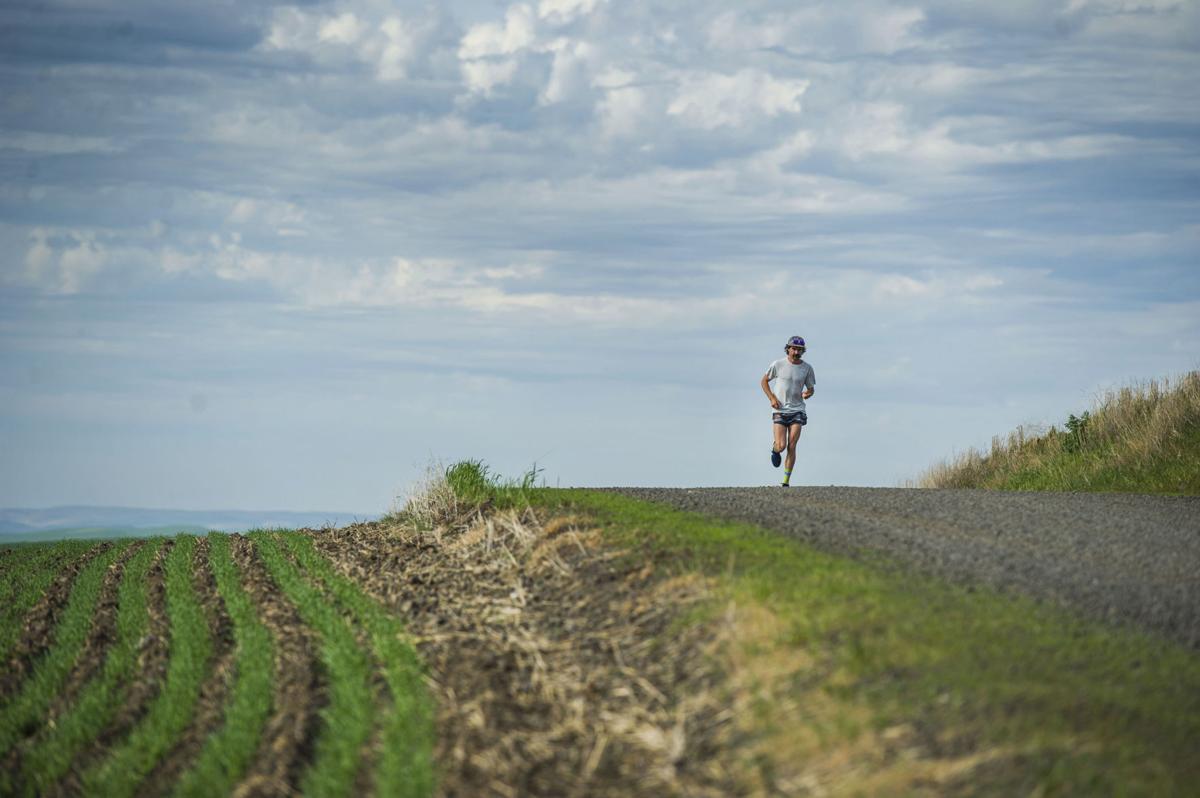 Drew Macomber rounds a bend on Mormon Grade recently while training for his ultrarunning. Photo by Greg Lehman.

Drew Macomber stretches under a tree on the Whitman College campus before a training run recently.

Drew Macomber is an ultrarunner living in the Walla Walla Valley.

Macomber gets on his running shoes before a training run around the Valley.

Drew Macomber rounds a bend on Mormon Grade recently while training for his ultrarunning. Photo by Greg Lehman.

When Drew Macomber lost his job at the Colville Street Patisserie due to COVID-19, there was one thing that kept him sane — his running shoes.

Macomber has been training in the Walla Walla Valley as an ultrarunner, meaning that he runs extreme distances and competes in ultramarathons — foot races longer than the marathon distance of 26.2 miles.

To the uninitiated, this sport might seem whacked. But despite not even being close to mainstream, the last decade has proven to show tremendous growth in the sport.

Though Macomber didn’t start running until just over six years ago, he’s always been extremely active, spending time rock climbing, skiing, and especially hiking. He grew up in proximity to Yosemite National Park and spent a lot of time hiking with his family.

“Our idea of a hike was Half Dome,” Macomber said smiling.

It was at Pacific Union College in the Napa Valley where Macomber took up running. He signed up for a jogging class where the instructor started by sending students out for 20 minutes in what the school dubbed “the back 40,” an impressive trail system in PUC’s Demonstration and Experimental Forest. Distance wasn’t the factor, but the instructor would up the running time each week.

“I’d give myself challenges before class and design these loops and add this hill there and this element there,” Macomber said. “My goal was to see if I could get back without being the last person.” Nobody was pushing him to do that.

Macomber then entered a 14-mile race held at the back 40 and won. Then came the Napa Valley Harvest Half Marathon where he placed second, just six seconds behind the winner.

Next came a trail half marathon in San Francisco. Macomber was third out of close to 1,000 runners.

“After that, I thought ‘maybe I am kind of good at this,’” he said.

He signed up for his first 50k in 2015 — the Woodside Ramble held in the hills south of San Francisco — and got hooked.

“That race was so painful. It was the worst experience ever,” Macomber recalled.

“But as soon as I crossed the finish line the addiction was real.”

He came in fourth place and returned in 2016 to win, shaving almost an hour off of his previous time. He still holds the third-fastest overall time in the history of the race.

More 50k and 50-mile races followed with top finishes but in 2017, Macomber entered and won his first 100-miler, Rio Del Lago in Granite Bay, Calif. He finished over an hour ahead of the second-place runner.

To date, Macomber has raced approximately 23 ultras, not including ultra-distance training runs and sub ultra-races.

Up until two years ago, Macomber had no formal training.

“I’d just go out and hammer every run as hard as I could including day-long runs,” he said.

In February of 2018, he had the opportunity to meet champion elite runner and coach to renowned international athletes David Roche at Red Tail Ridge Trail Run in northern California. As it turns out, Roche had Macomber on his radar.

From that initial contact, and a few emails later, Roche offered to coach Macomber, not just in response to his race successes. Roche is known for his philosophy of people finding joy and purpose even more than topping the race charts. He is the author of the book, “The Happy Runner,” with his wife Megan, also a celebrated elite runner and coach.

It wasn’t until later that he realized what Macomber was capable of.

“I think Drew has the potential to be one of the best athletes in the world,” says Roche.

“He combines mental toughness and the ability to grind through the ups and downs with physical talent that really shines in ultras in particular,” Roche said.

“I didn’t know that at first — what I knew is that he’s just an amazing person and his spirit so obviously jumps out at you when you first meet him.”

Mormon Grade and Scenic Loop are also regulars for “vert,” or vertical training. Macomber also spends a good amount of time running on the road, hitting the recreation path in College Place where he lives, following it past the Whitman Mission to Last Chance Road and looping back.

Macomber’s goals are to race the Western States Endurance Run, the world’s oldest 100-mile trail race — considered the Super Bowl of ultras, and the Ultra-Trail de Mont-Blanc (UTMB) — think of it as the World Cup, drawing thousands of runners internationally.

Roche senses Macomber has what it takes.

“In really tough moments, he’s quickly able to reset, refocus and keep going,” Roche said. “That combined with him progressing so rapidly in workouts, I thought ‘oh, you have it. You have that thing that coaches dream about.’”