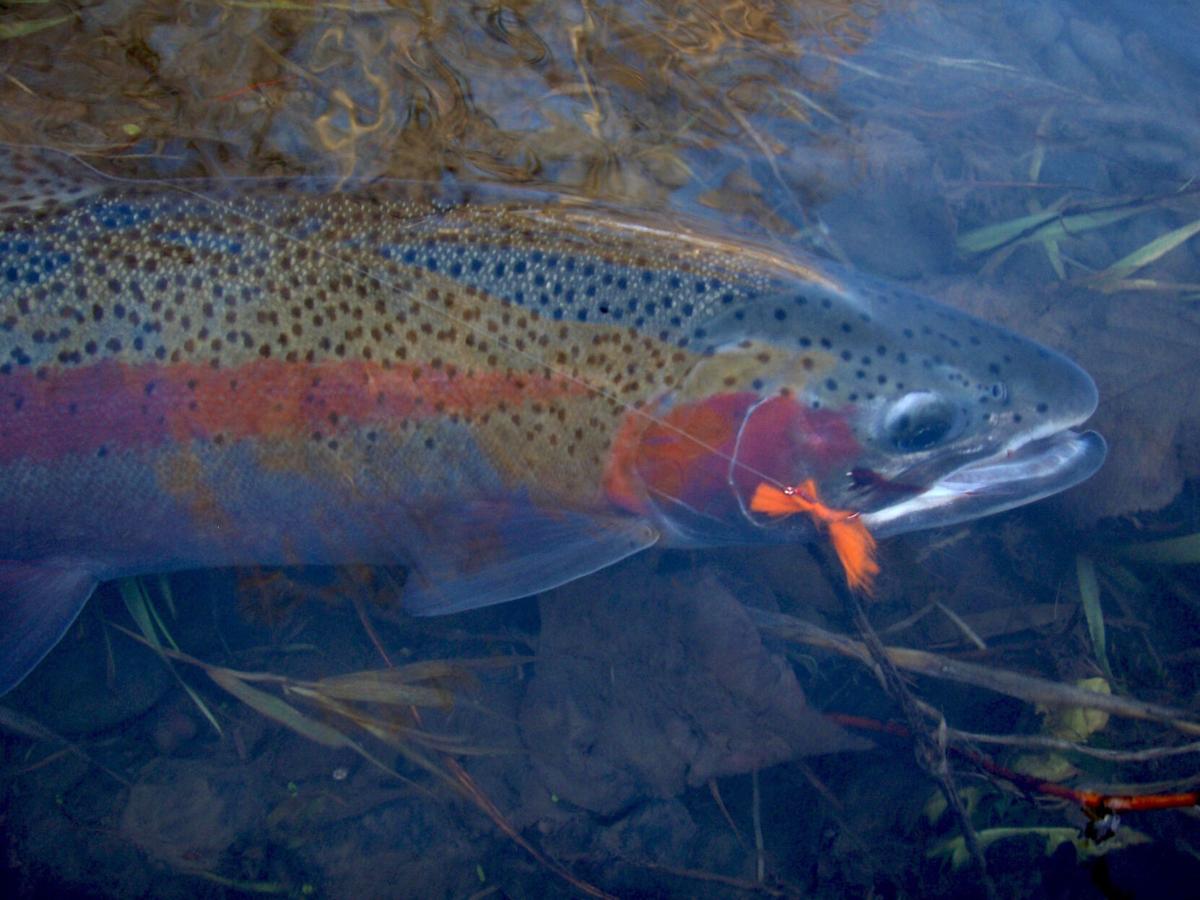 Interior Columbia Basin steelhead are summer-run, but they don’t enter mid-Columbia tributaries until rainfall or early snow melt leads to an increase in flow. 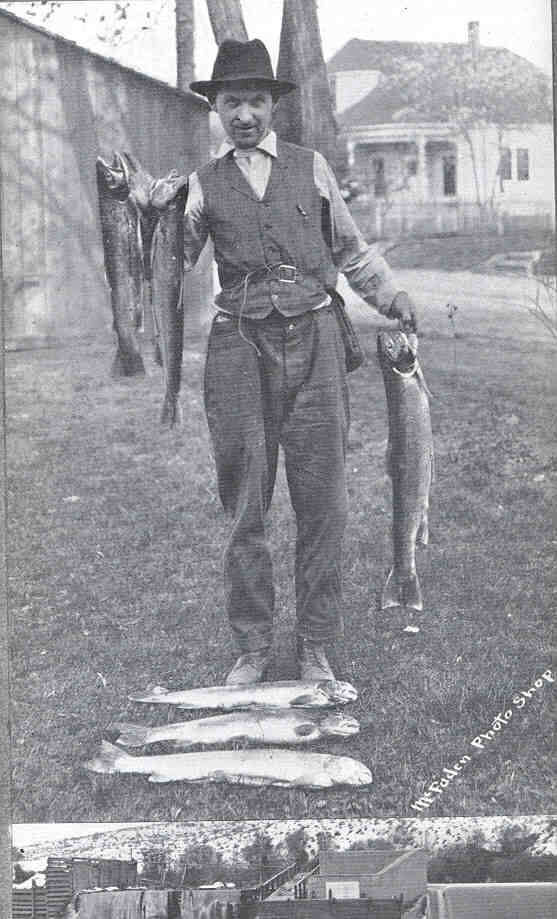 Over harvest of steelhead contributed to their demise as shown in a century-old photo taken near 9-Mile Dam on the lower Walla Walla River. 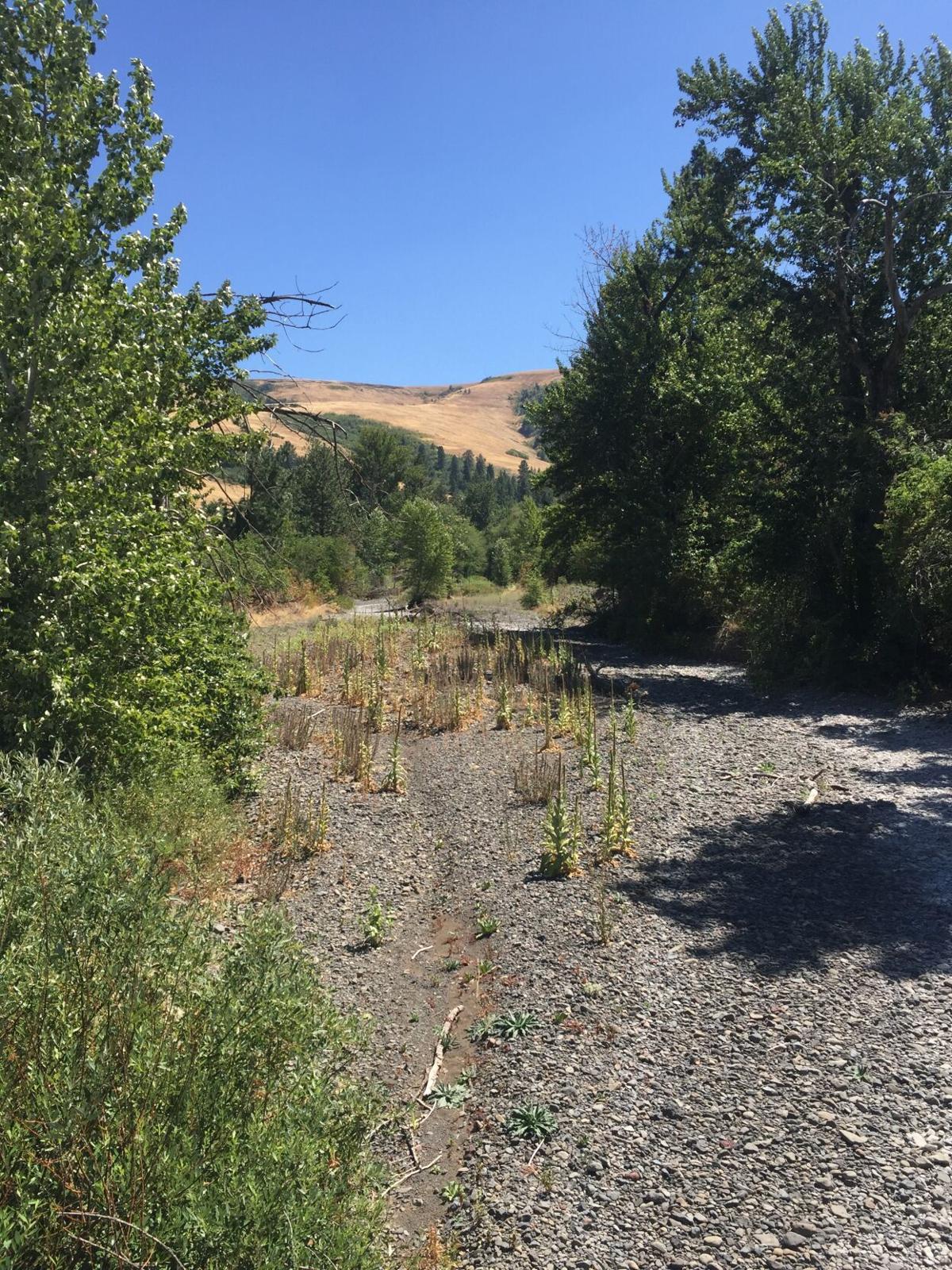 Climate change has led to warmer water temperatures and less flow, such as this tributary to the Umatilla River that went dry this summer. 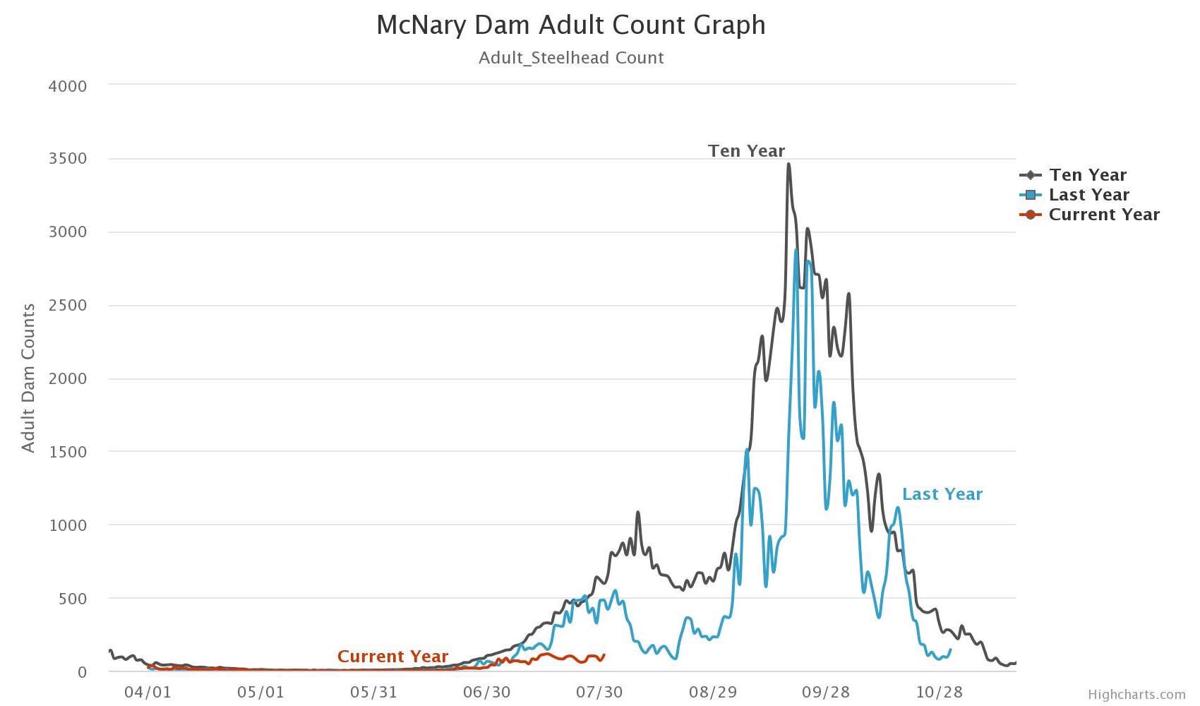 Steelhead run timing to the upper Columbia Basin, based on adult counts over McNary Dam, peaks in September.

Interior Columbia Basin steelhead are summer-run, but they don’t enter mid-Columbia tributaries until rainfall or early snow melt leads to an increase in flow.

Over harvest of steelhead contributed to their demise as shown in a century-old photo taken near 9-Mile Dam on the lower Walla Walla River.

Climate change has led to warmer water temperatures and less flow, such as this tributary to the Umatilla River that went dry this summer.

Steelhead run timing to the upper Columbia Basin, based on adult counts over McNary Dam, peaks in September.

“...these Savages have wers made of willows across this little river (Walla Walla) where they catch large quantityes of Salmon trout, Suckers, &C”

— April 29, 1806, John Ordway, a sergeant with the U.S. Army who volunteered to join Lewis and Clark in their Voyage of Discovery to the Pacific Ocean.

Pound-for-pound, no freshwater fish fights harder than a steelhead. They swim faster and jump higher than their Pacific salmon relatives. Some have the capacity to migrate over 2,000 miles to the ocean and back, spawn and survive all obstacles to do it again.

No wonder these iconic fish are the favorite of many anglers.

Genetic evidence in the 1980s led to steelhead (also known as rainbow trout when they spend all their lives in fresh water) being placed in the genus Oncorhynchus, along with cutthroat trout and the five species of Pacific salmon.

The broader group dates back 18 million years, with only a few core populations surviving the last glacial maximum that occurred approximately 20,000 years ago. Descendants of ice-age refugia eventually colonized diverse habitats that include lakes, rivers, estuaries and tiny mountain streams.

During their arduous journey down the Columbia River, members of the Lewis and Clark Expedition coined the term “salmon trout” for steelhead, perhaps reflecting on encounters with headwater trout and migratory salmon.

A million or more steelhead are thought to have entered the Columbia River before the arrival of European American settlers. Harvested commercially in North America until the 1930s, reported catches were as high as 5 million pounds in 1892.

Population declineFast-forward a century later to a landmark study by a team of scientists who reported that 75 separate stocks of West Coast steelhead were at risk of extinction. Alarm bells went off.

A follow up review by the National Marine Fisheries Service in 1996 concluded the Upper Columbia River Evolutionary Significant Unit was in danger of extinction. The majority of stocks in the Middle Columbia ESU (i.e., Yakima, Walla Walla, Umatilla, John Day and Deschutes rivers) were “on the decline.” Steelhead in the Snake River Basin ESU were deemed likely to become endangered “in the foreseeable future.”

Similar to salmon, artificial propagation was seen as a means to counter the effects of loss and degradation of spawning and rearing habitat and the over harvesting of wild populations. Unfortunately, releases of large numbers of hatchery steelhead masked the decline of wild fish and, in some cases, led to adverse genetic impacts that included reduced reproductive success.

Perhaps more critical is that nearly 50% of formerly available stream habitat has been blocked with dams, culverts and irrigation diversions.

Warning readers in 1898, the Weston Leader reported that Pine and Dry creeks, once excellent trout streams, “have been obstructed for several years.” A comprehensive survey of Columbia Basin streams by the Fish and Wildlife Service in 1950 documented over 150 diversion dams on the Yakima River and its tributaries. Also reported was a lack of water in the lower Umatilla River when fish were migrating. On the Walla Walla River downstream of Milton-Freewater, the riverbed was dry for a distance of 2½ miles from late spring to summer.

Recognizing the importance of streams to the survival of steelhead, regional fisheries management agencies enacted new harvest regulations for trout that included a minimum size of 8 inches and a late May season opening to allow more juvenile steelhead or “smolts” to out-migrate safely. “Put-and-take” plantings of rainbow trout is currently restricted to lakes and adult harvest of steelhead is largely limited to hatchery-origin fish.

Portland General Electric and the Confederated Tribes of the Warm Springs have partnered to reintroduce salmon and steelhead upstream the Pelton-Round Butte Complex of dams on the Deschutes River. The Confederated Tribes of the Umatilla Indian Reservation recently released adult steelhead outfitted with radio transmitters into McKay Reservoir to help resolve unknowns associated with reintroducing steelhead to spawning and rearing habitat not used for nearly a century.

On a broader scale, the Western Rivers Conservancy (WesternRivers.org) focuses on land acquisition and habitat improvement activities in the John Day, Methow and other rivers in the West. The goal is protection of headwater tributaries where steelhead spawn and rear by partnering with long-term stewards that include land management agencies and the Tribes.

What will the future hold?The life cycle of steelhead is fraught with danger.

Obstacles to safe downstream passage of juveniles through mainstem dams of the Columbia and Snake Rivers include predators (e.g. walleye, bass, fish-eating birds) and delayed migration because of slow-moving reservoirs. Ocean life is also a challenge. Steelhead spend 15 to 30 months of life in the Pacific Ocean avoiding foreign nets, the “Blob” (warm water heating the ocean), killer whales, microplastics, sewage and industrial waste.

If that’s not enough, Northwest rivers appear to be warming earlier and staying warm longer. Cool water tributaries that enter the lower Columbia River provide temporary refuge for upstream migrating steelhead when summer-time temperatures are elevated, but overall survival is not higher because anglers key into these areas. The Deschutes and the Umatilla rivers provide the only potential cold water sources within the 100-mile stretch between The Dalles and McNary dams.

According to fisheries managers, “this is the second-worst steelhead run since 1938.”

The clock is ticking on “salmon trout,” but there is hope for their survival with the combined efforts of resource management agencies, conservation groups and private landowners. Saving steelhead for future generations requires not only more efficient water use, but also being better stewards of our rivers and streams.

Dennis Dauble is author of four books about fish and fishing, including the award-winning “Fishes of the Columbia Basin” and “Bury Me With My Fly Rod.” His website is DennisDaubleBooks.com.

Dennis Dauble is author of four books about fish and fishing, including the award-winning “Fishes of the Columbia Basin” and “Bury Me With My Fly Rod.” His website is DennisDaubleBooks.com.

Behind the Lenz: Freezing time through your camera lens despite winter's challenges