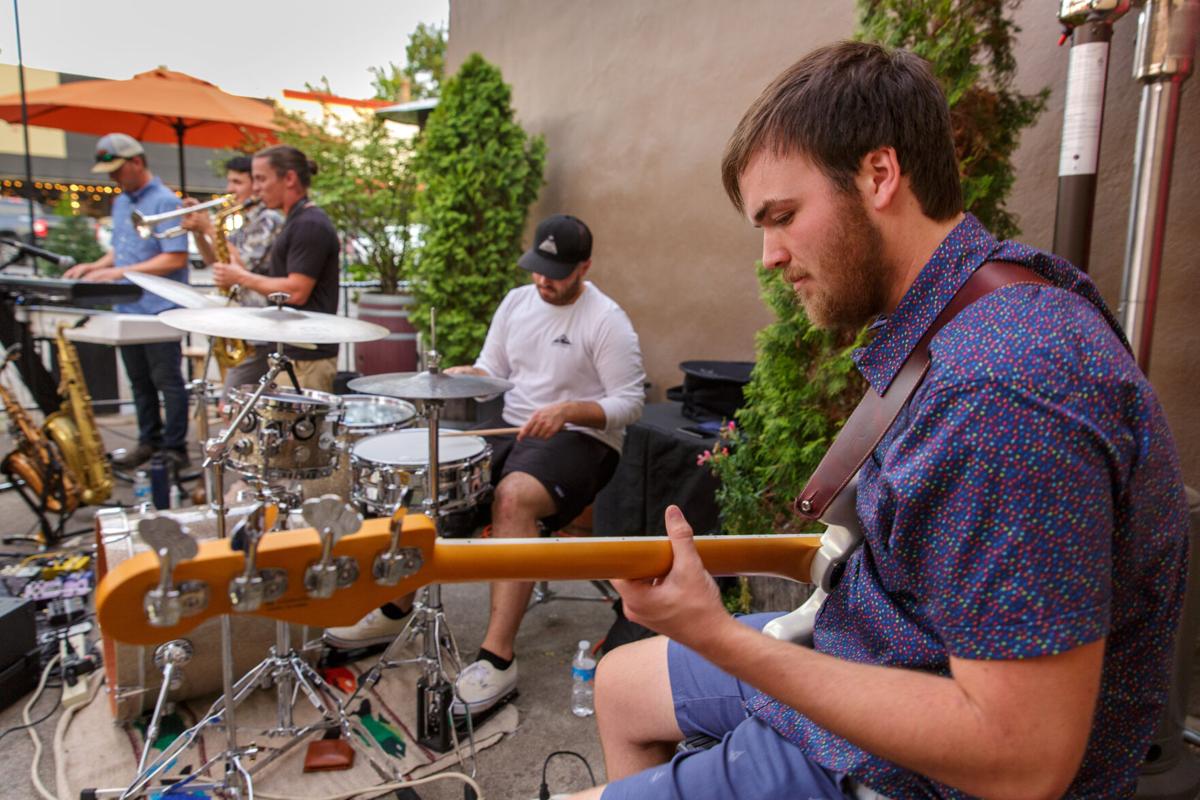 Bass player Silas Brannan lays down a foundation for Nate Miller & The Funktion as they build a house of bluesy jazz at a show on July 3, 2021. 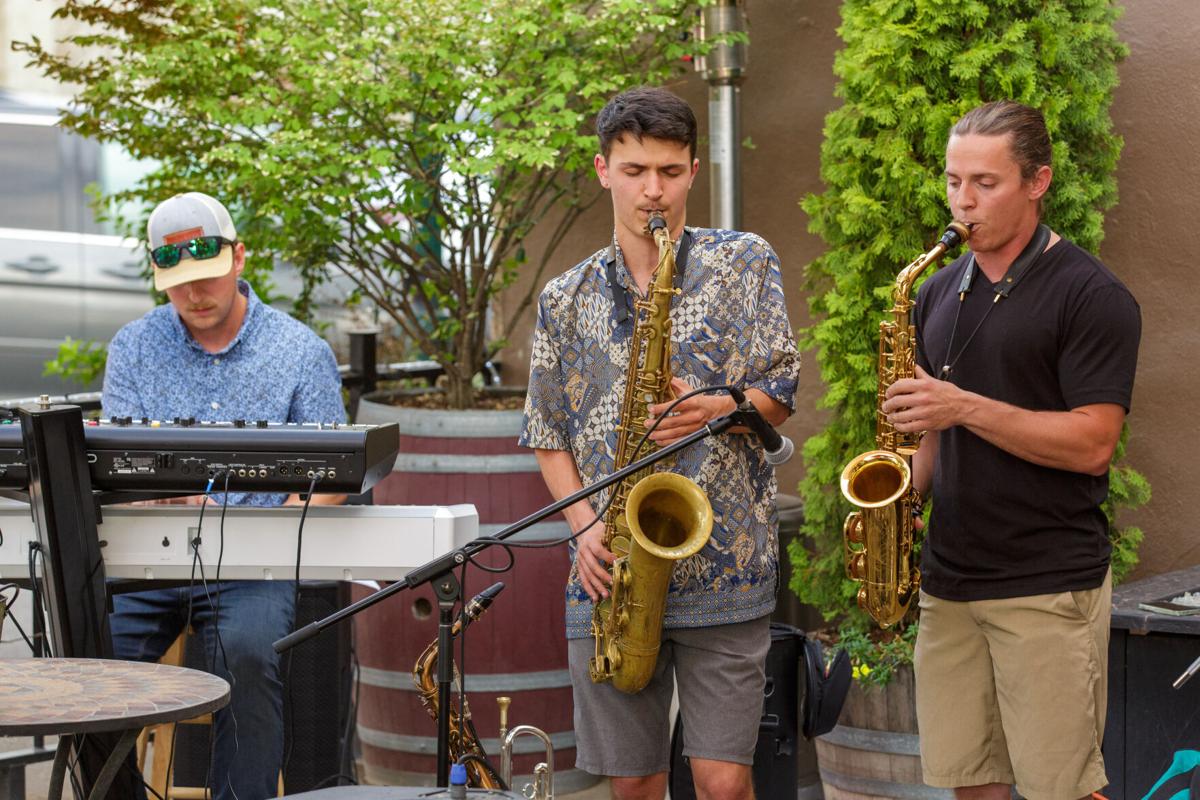 Nate Miller, left, is joined by mentor Lucas Simpson on saxophone at an evening performance at Bonztu Cellars’ downtown Walla Walla tasting room. Wineries are playing an important part in giving young, local musicians a place to practice their craft and grow their audience. July 3, 2021 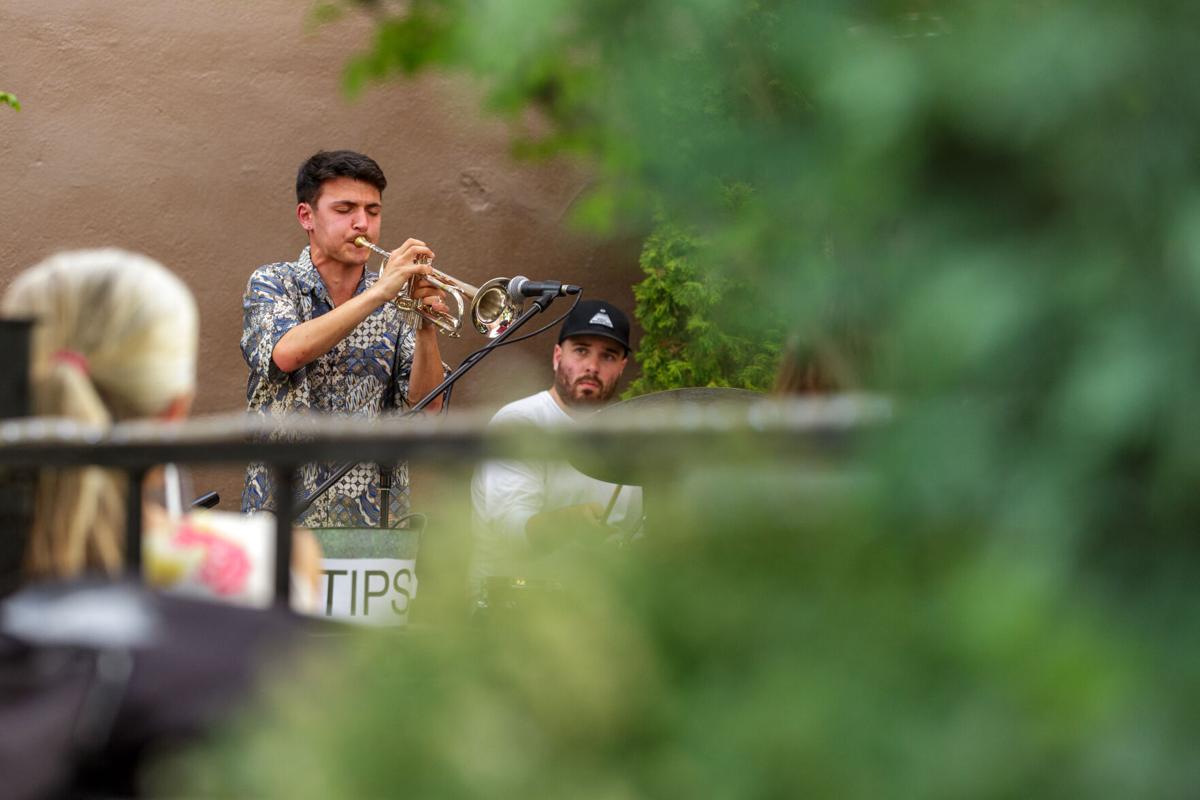 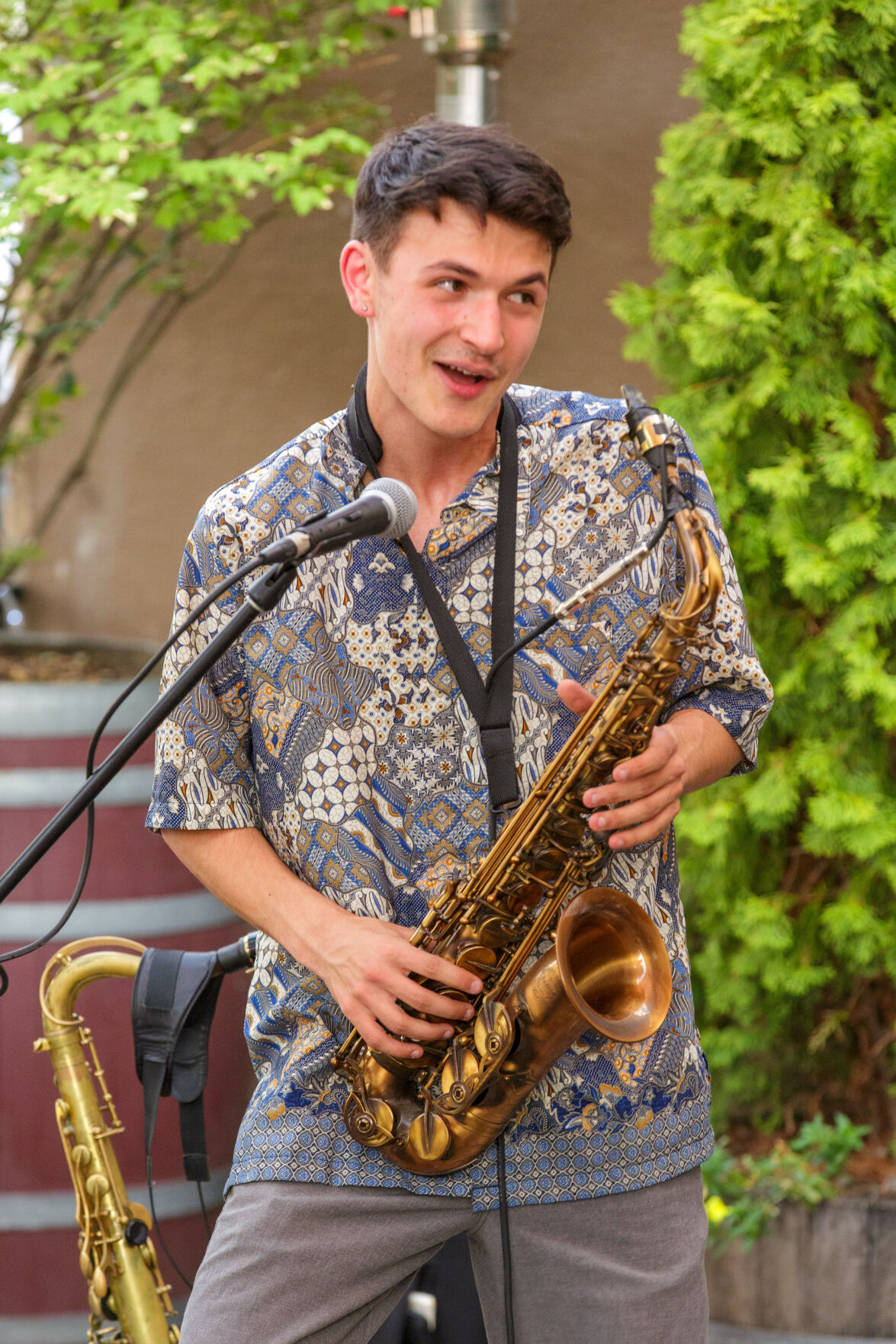 Nate Miller teases the fast-growing crowd gathering to hear his band, The Funktion, play on July 3, 2021. 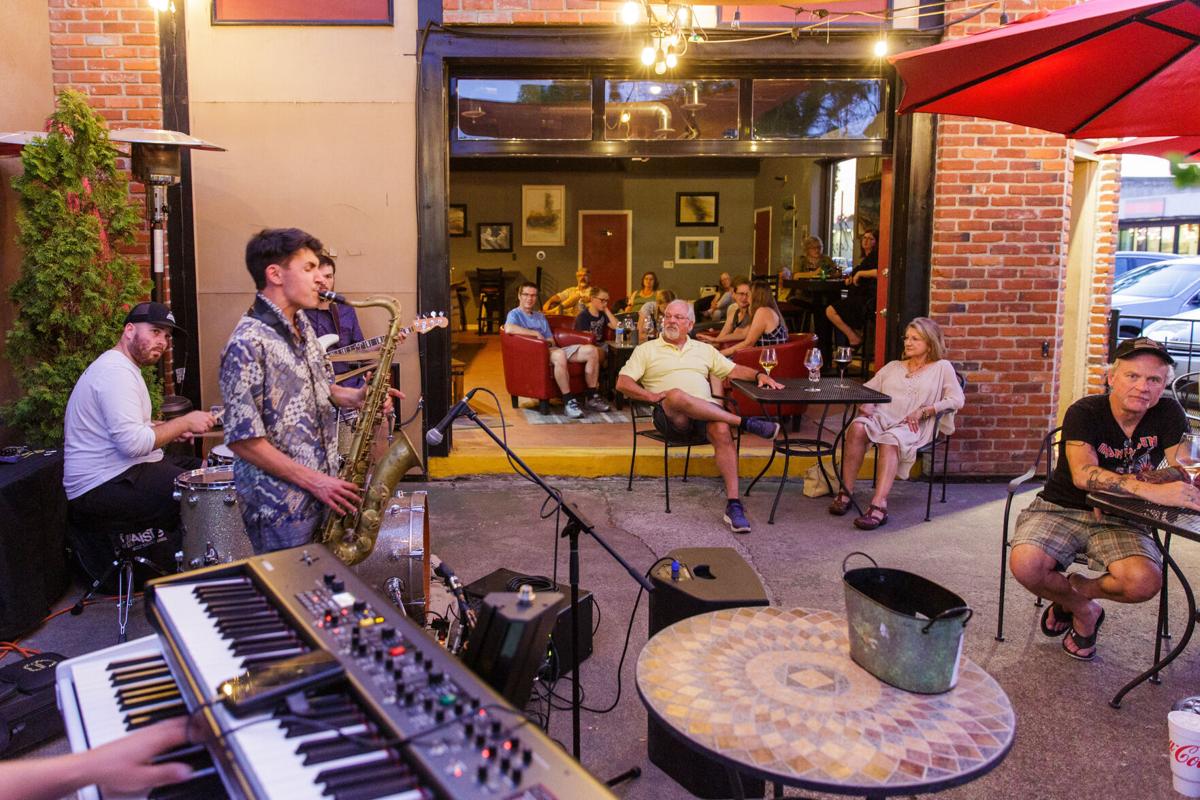 Folks gather at Bontzu Cellars on July 3, 2021, to listen to Nate Miller & The Funktion's mix of blues, funk and jazz. 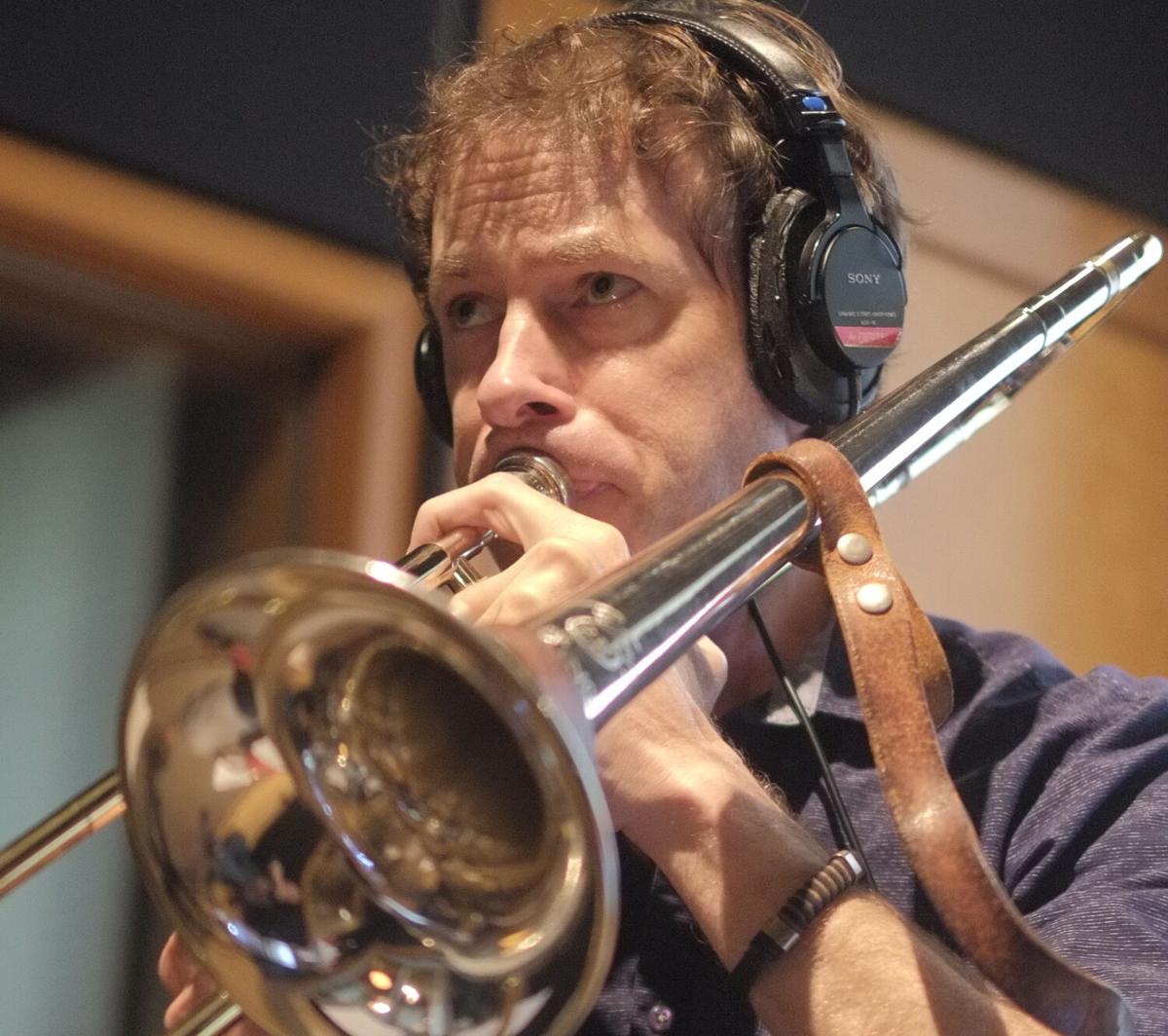 Doug Scarborough on his trombone. 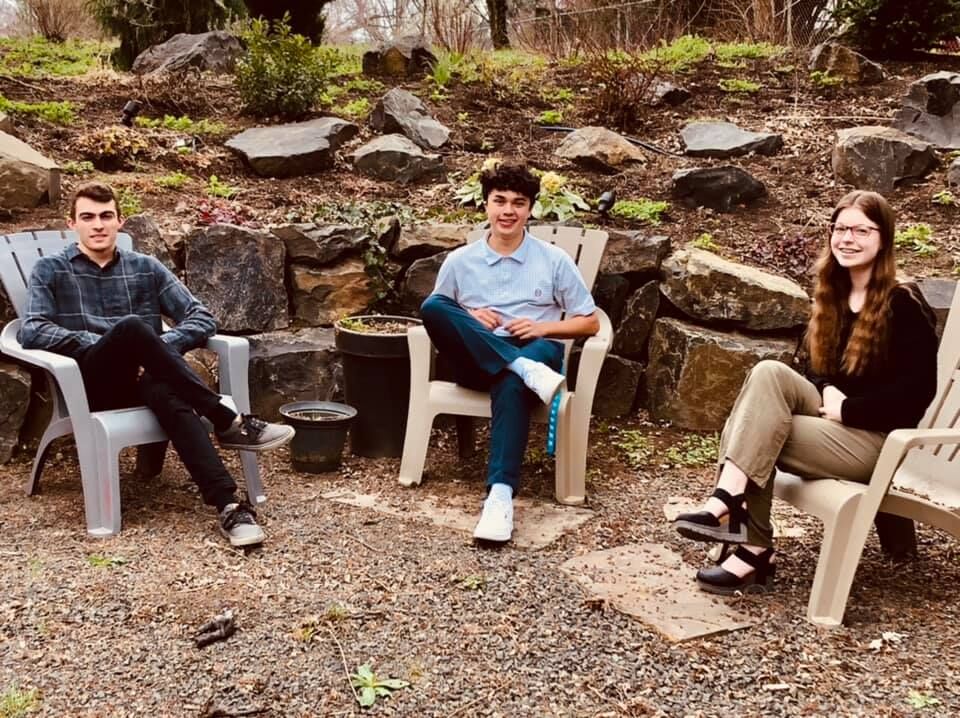 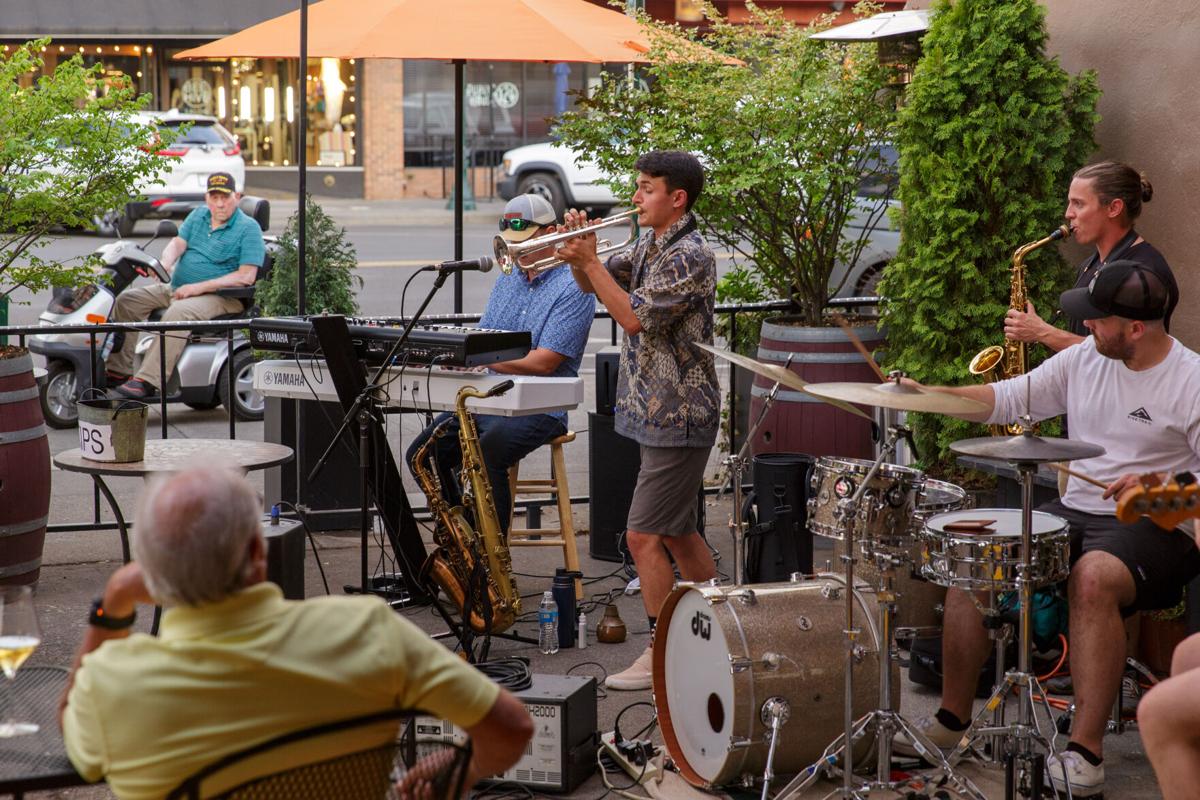 Passersby couldn't seem to help from becoming spellbound by the sounds of Nate Miller & The Funktion in downtown Walla Walla on July 3, 2021. 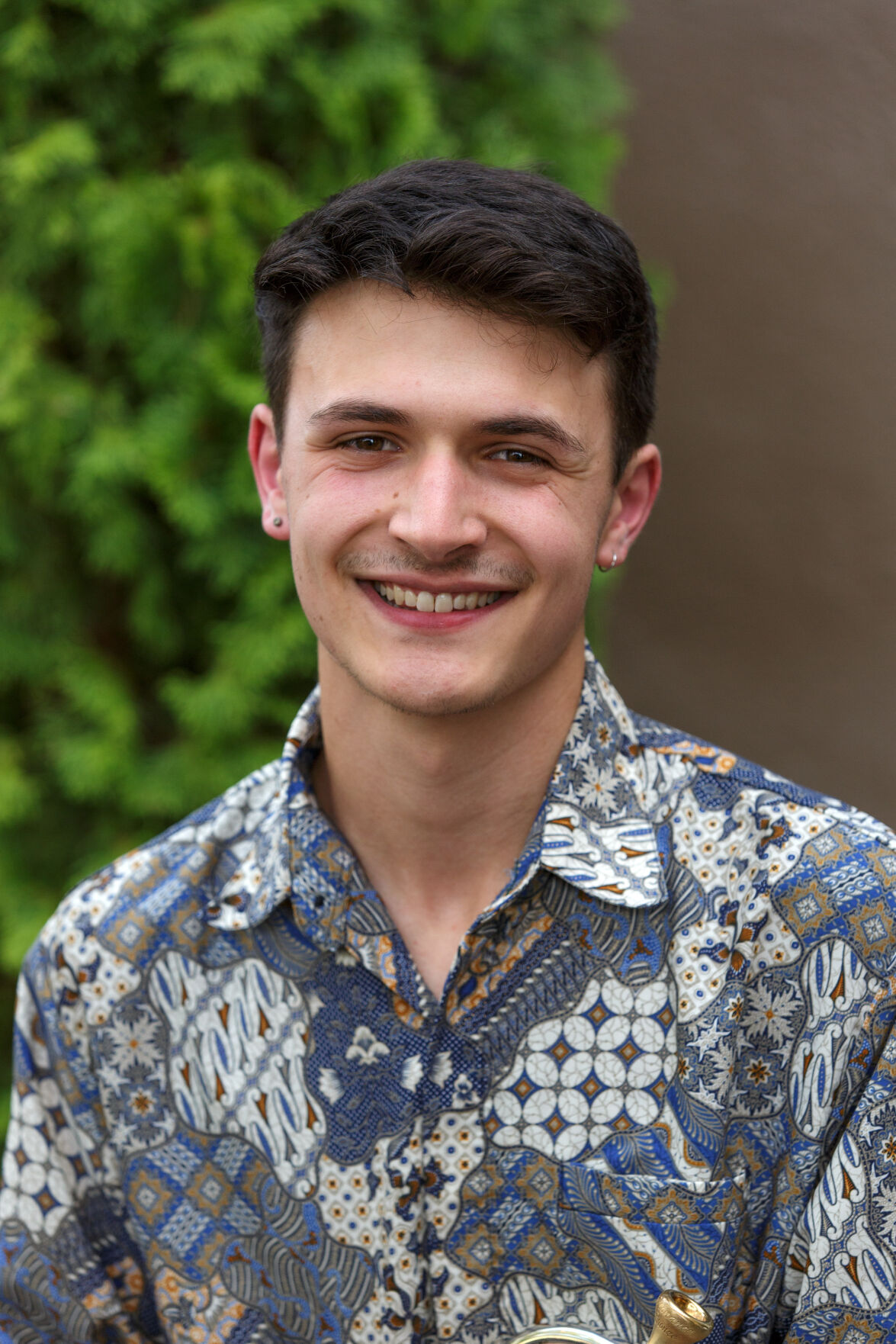 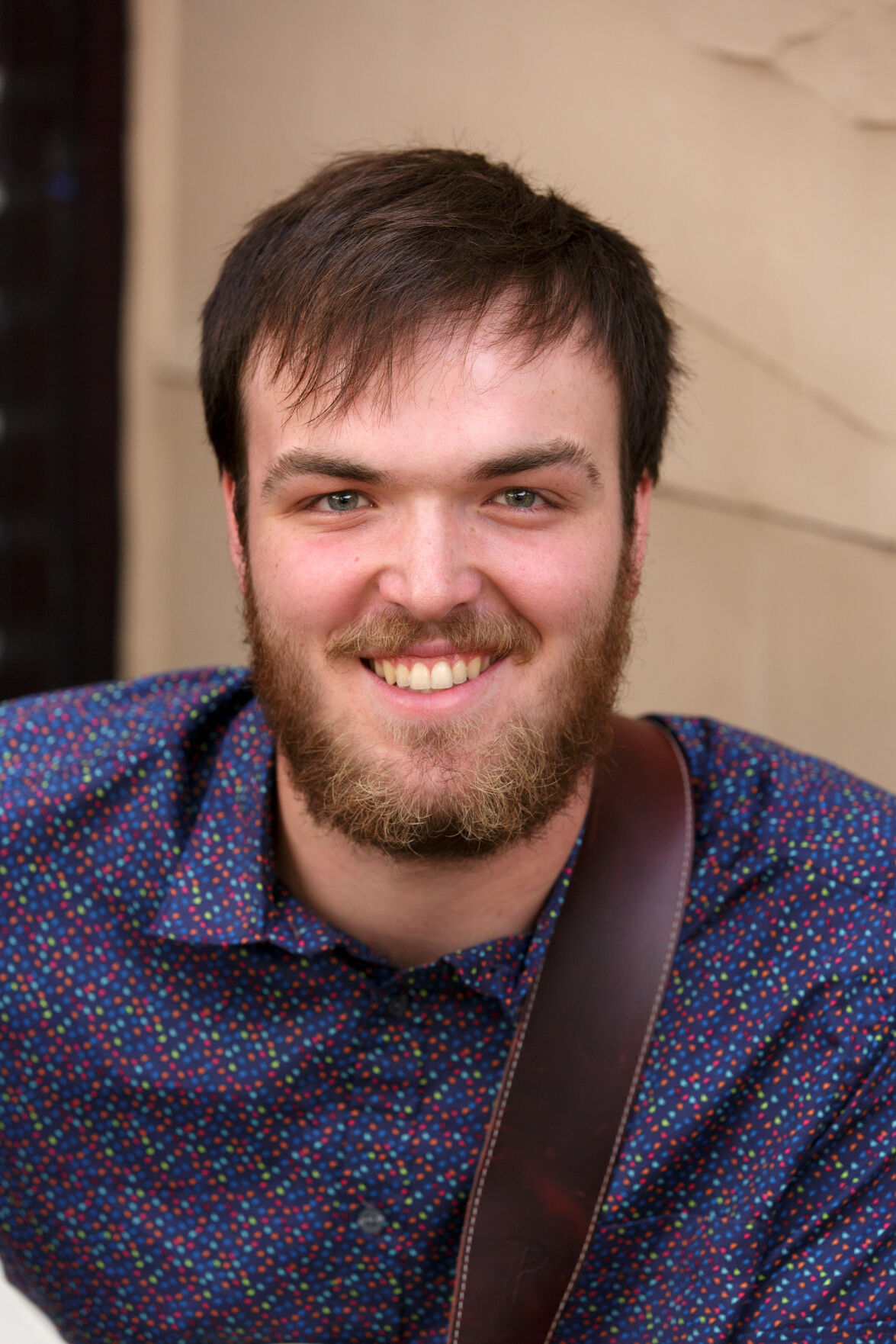 Bass player Silas Brannan lays down a foundation for Nate Miller & The Funktion as they build a house of bluesy jazz at a show on July 3, 2021.

Nate Miller, left, is joined by mentor Lucas Simpson on saxophone at an evening performance at Bonztu Cellars’ downtown Walla Walla tasting room. Wineries are playing an important part in giving young, local musicians a place to practice their craft and grow their audience. July 3, 2021

Nate Miller teases the fast-growing crowd gathering to hear his band, The Funktion, play on July 3, 2021.

Folks gather at Bontzu Cellars on July 3, 2021, to listen to Nate Miller & The Funktion's mix of blues, funk and jazz.

Doug Scarborough on his trombone.

Passersby couldn't seem to help from becoming spellbound by the sounds of Nate Miller & The Funktion in downtown Walla Walla on July 3, 2021.

“It’s insane, really,” Nate Miller says with an enormous smile as he hoists sound equipment out of his car.

“People are so happy to be out. It’s been amazing to be back in this again.”

On this hot summer evening, Miller and his band are playing at the Bontzu Cellars tasting room on Walla Walla’s Main Street. It’s a familiar venue to the band leader and his fans, several of whom are gathering well before the music is set to begin at 8 p.m.

As the city unwraps itself from the heavy covering of the COVID-19 pandemic that silenced public and private musical performances, ensembles such as Nate Miller & The Funktion are once again a familiar treat for local and out-of-town jazz, blues and funk aficionados.

No surprise, given the Walla Walla Valley’s love affair with music, from the historical Walla Walla Symphony to robust public school music programs to festivals and downtown concerts.

What might be surprising, however, is Miller’s age. Having just turned 20, the Walla Walla High School graduate is already a seasoned performer with plenty of paying jobs under his belt. Besides playing a “New Orleans worthy” trumpet, according to his musical peers, Miller has learned how to book gigs and negotiate fees on the business end of making music.

He will pack up those experiences and more to take with him to New York City this fall, where he will attend Mannes School of Music at the legendary “The New School” university on a full scholarship.

There’s something about Walla Walla that nurtures young musicians such as Miller, said Doug Scarborough.

Scarborough is not only an associate professor of music at Whitman College but a trombonist, bassist, pianist, guitarist, singer, songwriter and composer in classical, jazz and pop music.

He arrived in Walla Walla a decade ago, when the only reliable open venue for jazz was downtown’s Backstage Bistro restaurant, where owner and musician Bob Parrish strove to host live music at any opportunity.

That business is gone, but its artistic seeds were sown, Scarborough said, and now a handful of tasting rooms and wineries are serving as incubators for young musicians.

Among those is Armstrong Family Winery, in its Main Street tasting room.

Her family’s winery reflects her family’s values, she said, and that includes supporting the arts.

That Walla Walla is blessed to have such great jazz talent ties those things together in a way that benefits her customers, the city’s artistic flavor and rising musicians, Armstrong said.

A wonderful note in that mix is the variety of jazz that pours forth, she added.

“We have a lot of the old, classic standards, we have Latin jazz a couple times a month … one of the cool things about jazz is every performance is different.”

Some of it very much so, Scarborough said.

While Miller, for example, is certainly versed in the standards like Duke Ellington, Miles Davis and Count Basie, his preference is for a modern sound, “with more of a funk rock beat,” the professor said.

The sound is an evolution from old to new, which makes it attractive to younger musicians. And that, in turn, attracts listeners.

He regularly plays the keyboard for Miller’s band and enjoys the rubber-necking he sees from that seat, Scarborough said.

“When I look out to the audience, often they are from out of town, and they are walking through. They walk by and hear this stuff and think ‘Oh, my gosh. There’s this electric energy coming from this band.’”

He sees people start to smile, he said with a laugh.

“They get happy, and they don’t even know why.”

Silas Brannan is grateful for Walla Walla’s hunger for music and for Miller’s work on opening doors to younger musicians.

Brannan, 19, plays bass in Funktion. Although his situation will change with Miller’s departure to New York, Brannan has found Walla Walla to be “really accessible” to people wanting to perform, he said.

“There will definitely always be something. You just talk to people to find it.”

Dre Dankel, too, looks up to Miller and appreciates the inclusiveness of the local music scene.

His group, Ritmo Jazz Trio, is reaping the rewards of a city that nourishes its youth. Having formed a group on the spur of the moment at the renowned Lionel Hampton Jazz Festival in 2020, the three high schoolers are now playing publicly as Walla Walla reopens.

All of them are in Walla Walla High School’s jazz band, Dankel said.

Miller’s influence as a family friend and big brother figure has helped Dankel understand what this town means for young musicians.

“Walla Walla offers the settings and the experiences you can get. Ritmo tries to spread the love of music, and this community has always supported it.”

Nate Miller gives a lot of the credit for his passion for jazz to his father, Byron Miller.

Not only did the senior Miller play lots of music by jazz trumpeters Maynard Ferguson and Chuck Mangione in the house, along with a good dose of rock music, but he took his son along to practices with Walla Walla Valley Community Band (now Walla Walla Valley Bands).

At 10, Nate Miller began playing trumpet in the band, too.

“Having my dad around, and I was this little kid practicing with Walla Walla Valley band and hearing all these artists, that’s what really sparked my interest.”

When he was a high school freshman, jazz called his name, Nate Miller recalled.

With support from his family, Wa-Hi band director Andrew Ueckert and other Walla Walla musicians, that passion has translated to the four-year scholarship and, the plan is, a career in music.

Walla Walla can always do more, Nate Miller said. He would love to see a summer camp for youth devoted to the jazz genre, for example.

On this night, however, it’s his time to give back, and there’s no question he’s happy to do just that. As sweet notes pour from his silver trumpet, the sound soars and swoops around Bontzu Cellars’ patio and flies off down Main Street. With all chairs taken, couples stand around the perimeter and sway with the music.

Feet tap and the smiles are tender as live jazz fills the air above downtown Walla Walla. Here, the keyboardist produces a salad of notes and there, the drummer adds a percussion dressing to the top.

Brannan’s bass thrums a rich foundation under it all.

By the time another of Miller’s mentors, Lucas Simpson, joins in with his saxophone, an audience of about 40 people is lapping up the buttery funk froth.

Pedestrians who, likely, were planning to just go on by on the sidewalk, become ensnared in the enchantment and lean helplessly into the music.

“You guys are outstanding, I swear to God,” one man shouts.

Miller smiles above his mouthpiece and offers a thank-you nod.

This kind of Walla Walla moment, he likes to say, “is a really, really special thing.”

Sound effects: Live music in Walla Walla and a short road trip away

Live music has officially returned, but many area venues are still just starting to resume the business of scheduling live events. Let this li…