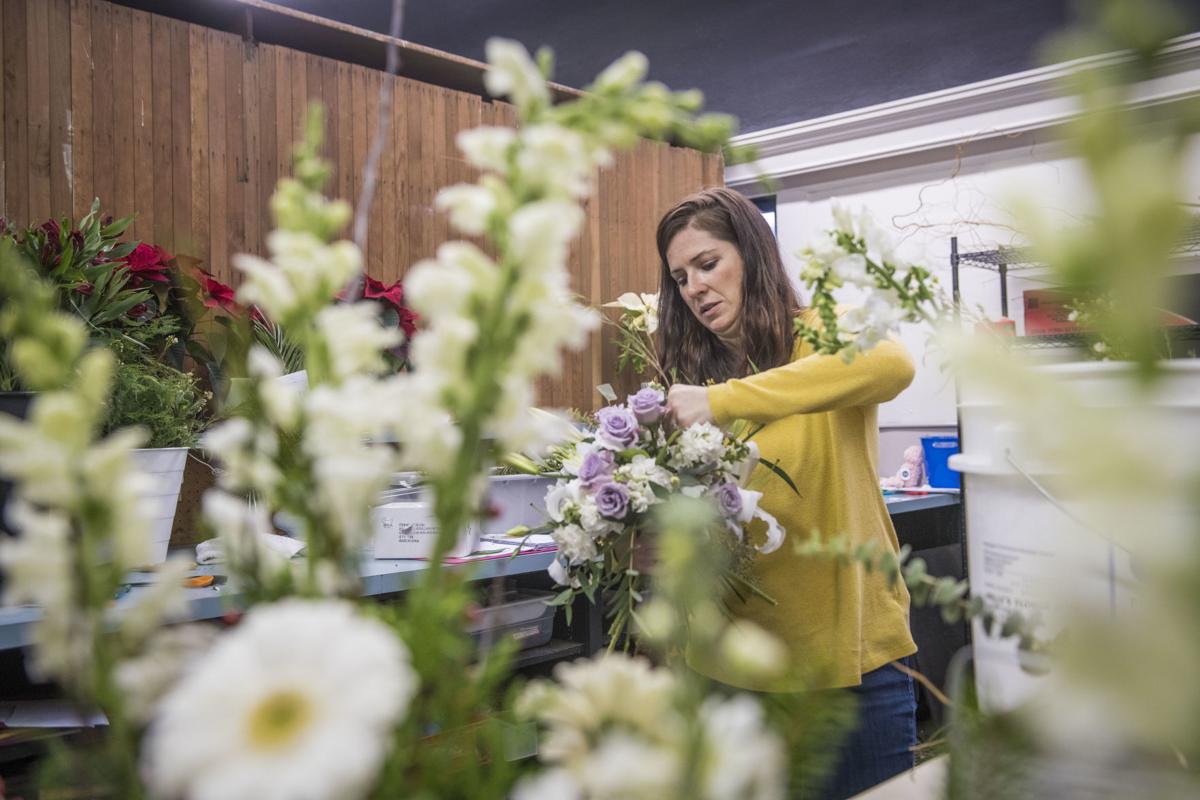 Holding the flowers in her hand for easy access, Jamie Graham arranges a bridal bouquet for a wedding this past December. 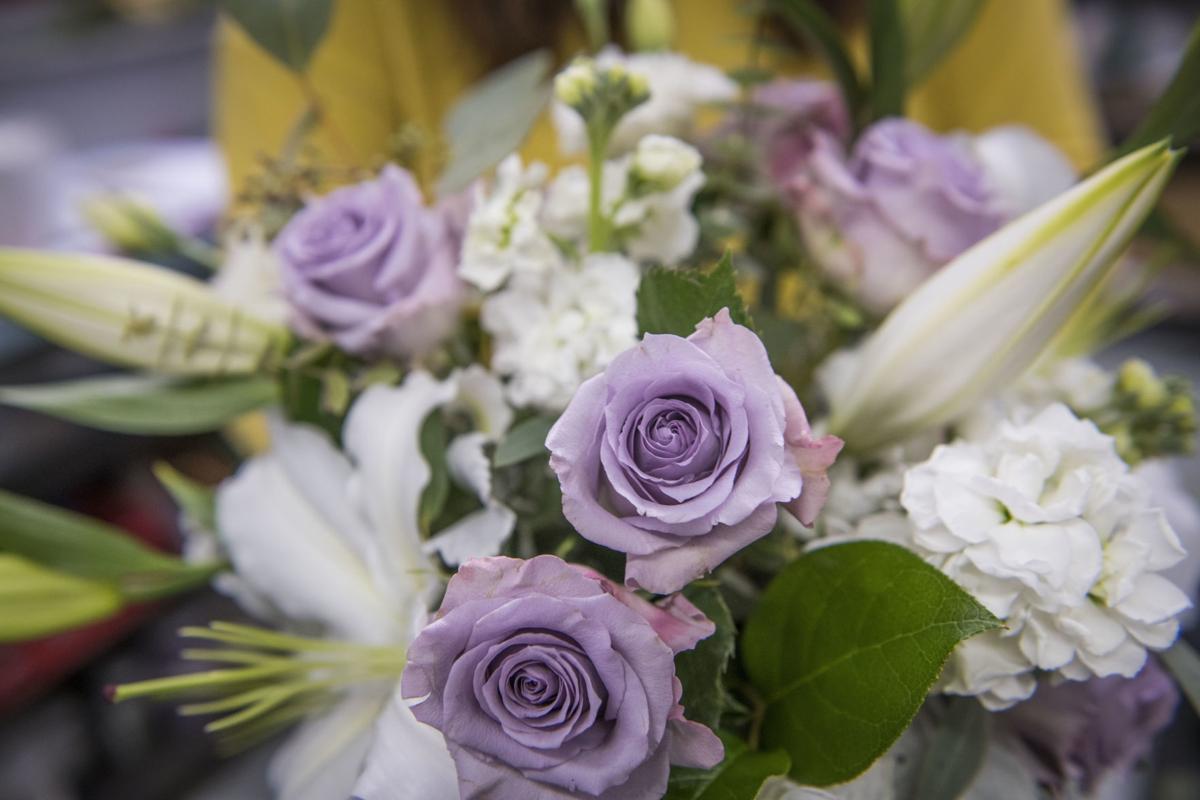 Holding the flowers in her hand for easy access, Jamie Graham arranges a bridal bouquet for a wedding this past December.

The blooms are some of the most popular choices people choose to decorate their nuptials, according to Jamie Graham, manager of Holly’s Flower Boutique in Walla Walla. Others include anthuriums and dried flowers.

She also said bohemian themes were popular, using pampas grass, arches, eucalyptus pods and browns, while some couples opted for a country-style with sunflowers and chamomiles.

“The textured element is really popular right now instead of the standard nosegay-style,” Graham said. “A lot of people like the organic look.”

“(There are) less two-color schemes in favor of the overall ‘feel’ of the wedding,” Fortin wrote in an email. “The movement has been more in favor of what flowers they like, considering the venue and the time of year. Then picking several colors for flowers, linens, etc. Less ‘matchy matchy.’”

Textures also seemed popular recently for clients of Anne Moore, owner/manager of Amore Floral Designs of Walla Walla. She said berries, vines, cox combs, and proteas, a southern African flower could be used “to break up all the softness.”

So many wineries, so little time

Saying “I do” outside has been popular in Walla Walla, Graham said, with spring, early summer and fall months winning against hot summers or cold winters. And of course, the more than 100 wineries with outdoor accommodations in the area have attracted many, she said.

If people married inside, in a church, Graham said, they tended to choose classic styles with whites and pinks, and sometimes peach. Navy and red also were incorporated, she said.

Moore, who has worked in the floral business for more than 30 years and opened her own shop about 17 years ago, said she’s seen increasing “destination brides” and less Walla Wallans tie the knot locally because more wineries have opened.

“They make a full weekend out of it (celebration),” she said.

Classic styles have remained the norm for Moore, who said couples often sought her to design the soft hues and well-known arrangements.

“Trend is hard for me to pin down,” Moore said.

But when she thought about it, Moore said she’d seen some popular picks. Greens and whites have been common in recent years, she said, as well as huge bridal bouquets meant to look randomly picked. She said she was relieved to see the former replaced by more colors and the latter beat out by smaller, well-designed arrangements.

Dyed flowers, too, Moore said, have been used recently, although she said she swayed brides and grooms away from them because of the unknown dye method.

Moore mentioned roses and peonies, like the others and added to the classic list with ranunculus. She said the latter has been used increasingly because of the availability.

Graham, who usually provides flowers for 10-15 weddings per year, said trends tended to stay the same year to year, but with slight tweaks, such as somehow using the “Color of the Year,” announced annually by the Pantone Color Institute, a business unit within the known paint company. The institute announced the 2020 color is “classic blue,” while 2019’s was “living coral,” and in 2018 it was “ultra violet.”

Graham said weddings can incorporate classic blue with blooms, such as delphiniums, hydrangeas, or even tweedias.

“They’re a fun flower,” Graham said of working with tweedias. “You don’t see it very often … It has multiple blooms per stem. It’s like a dancing flower.”

Fortin added blue star thistle and bachelor buttons to the list of blue-hued blooms, and said she had a couple of brides using the color.

Moore said she had at least one bride “definitely going blue” for her wedding, but was unsure whether this year’s color played a part in the decision.

“You always see a little of that (blue),” she said. “It’s always been a good wedding color.”

Other ways “classic blue” could play a role in a wedding included wafting a scent reminiscent of a “contemplation of where sky and sea meet,” as described at Pantone’s color reveal party by a CNN report in December 2019. Or, perhaps using “soft, velvety textures,” serving edibles tasting like “flowering vines,” and sounds of “vivid nostalgia.”

Where have all the flowers gone?

Arbors with florals were a popular item for weddings, Graham said, whereas hanging florals weren’t used as much here as elsewhere.

But Moore said hanging amaranthus or other long strands were popular, with many bleached.

“It adds a draping quality,” Moore said. “It’ll probably stay around at least a few years.”

Floral hoops instead of bouquets, were a hit last year, Graham said, but have waned in demand, while centerpieces were created to look suspended to enable guests to see across tables. Having the flower girl hold something else, like a lantern, instead of tossing petals, was another item, she said.

Moore said couples increasingly have asked for “wearable flowers,” rings instead of corsages, or necklaces and hairpieces. She also said boutonnieres have become more natural, using berries and other textures.

“A few years back, petals down the aisle were popular, along the seats,” Graham said, adding the trend had declined recently.

But of course, Moore said the petals remain requested of her.

Garlands down a table have been less asked for recently than cleaner, smaller, “out of the way” table decorations, Moore said.

“I think people ordered garlands because they thought they were cheaper than flowers,” Moore said. “But they’re (garlands) actually quite time consuming to make for me (and more expensive).”

Whatever trend you follow for your wedding, flowers always seem to be a central part of the planning. With the so-called “wedding season” coming soon, the local florists are sure to be busy pushing out petals, bouquets and decorations across the Walla Walla Valley.