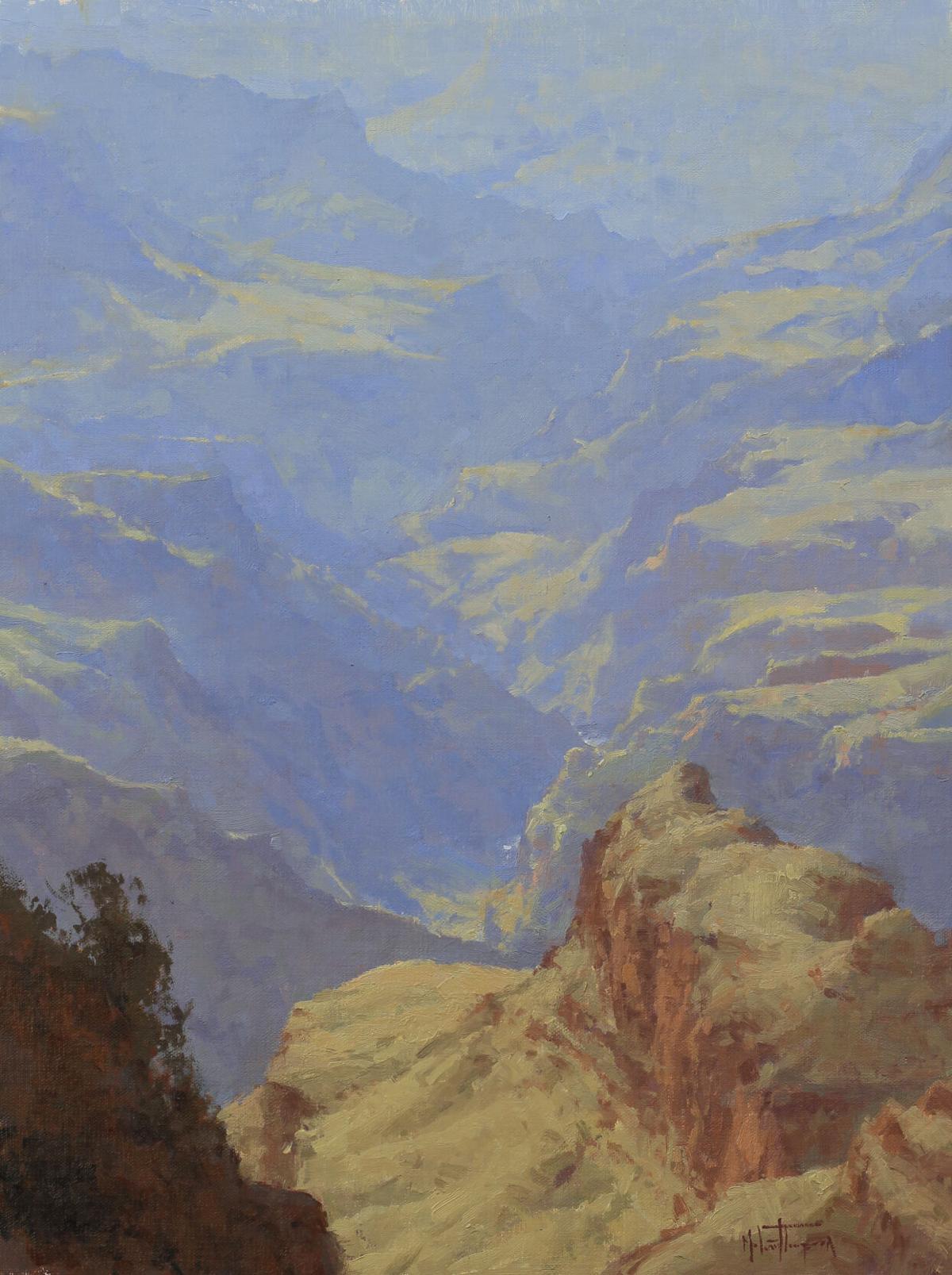 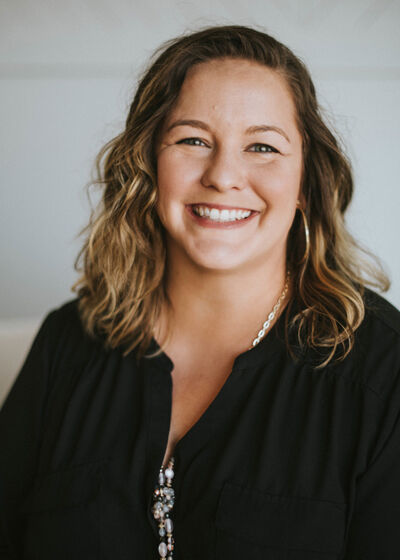 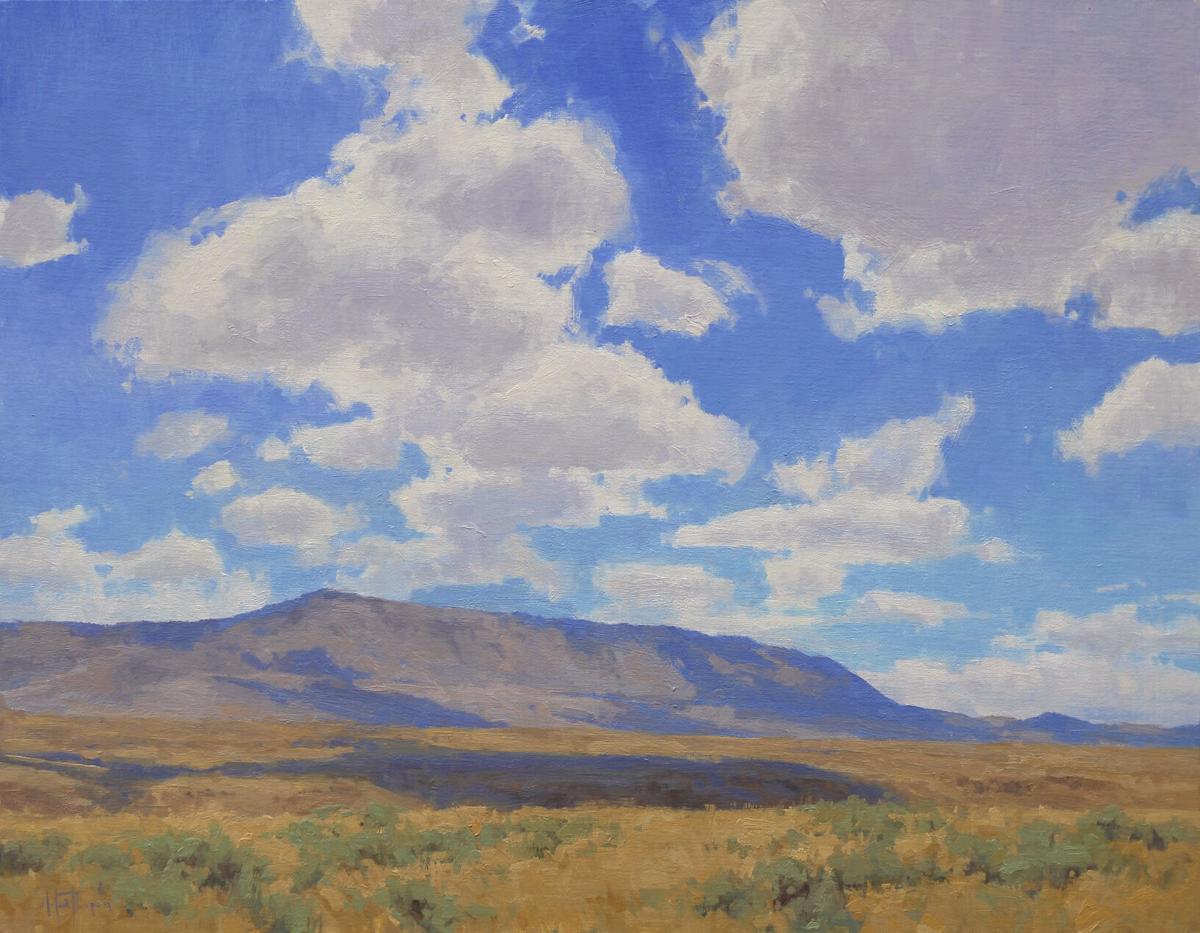 Sunshine and Rattlesnakes by Melanie Thompson. 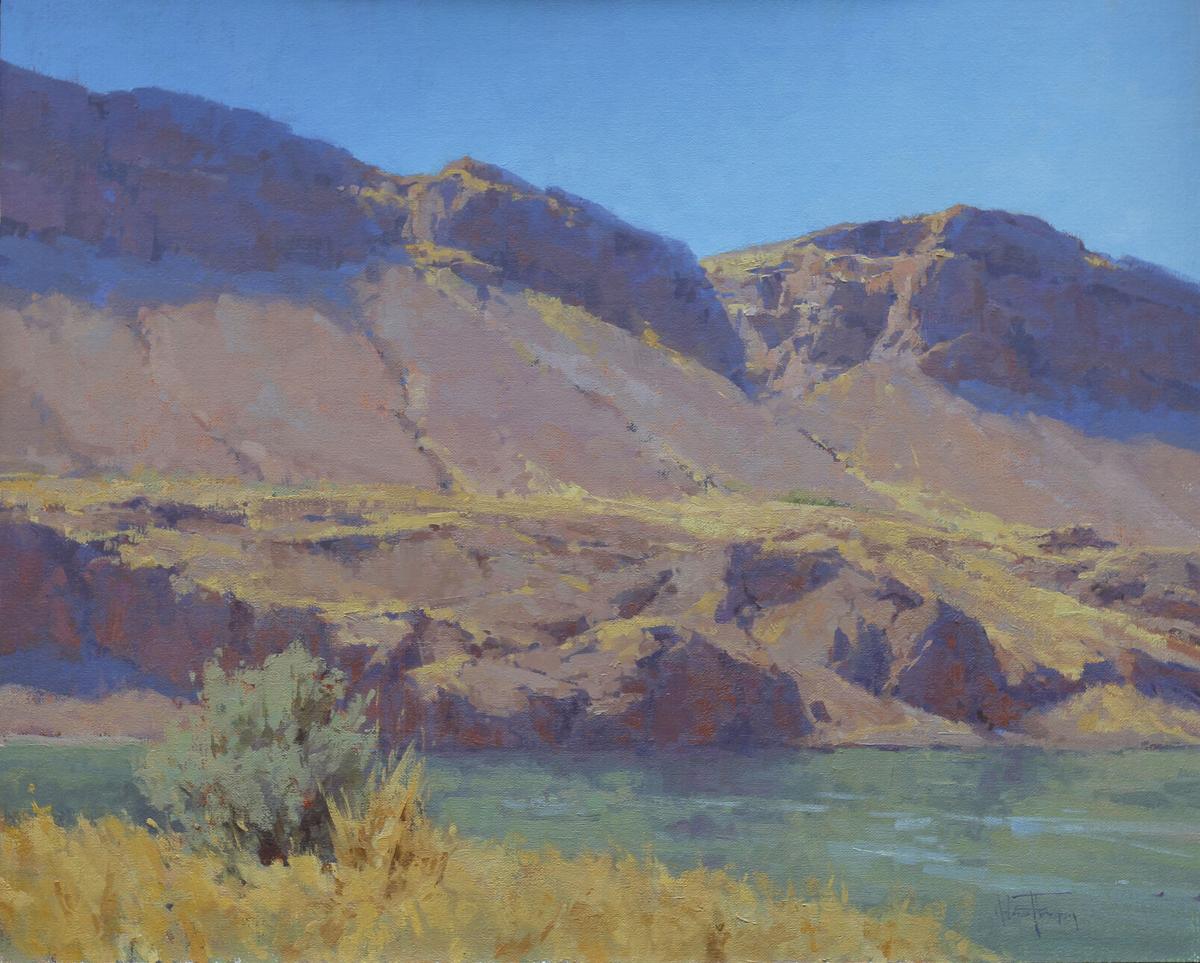 Wear and Tear by Melanie Thompson. 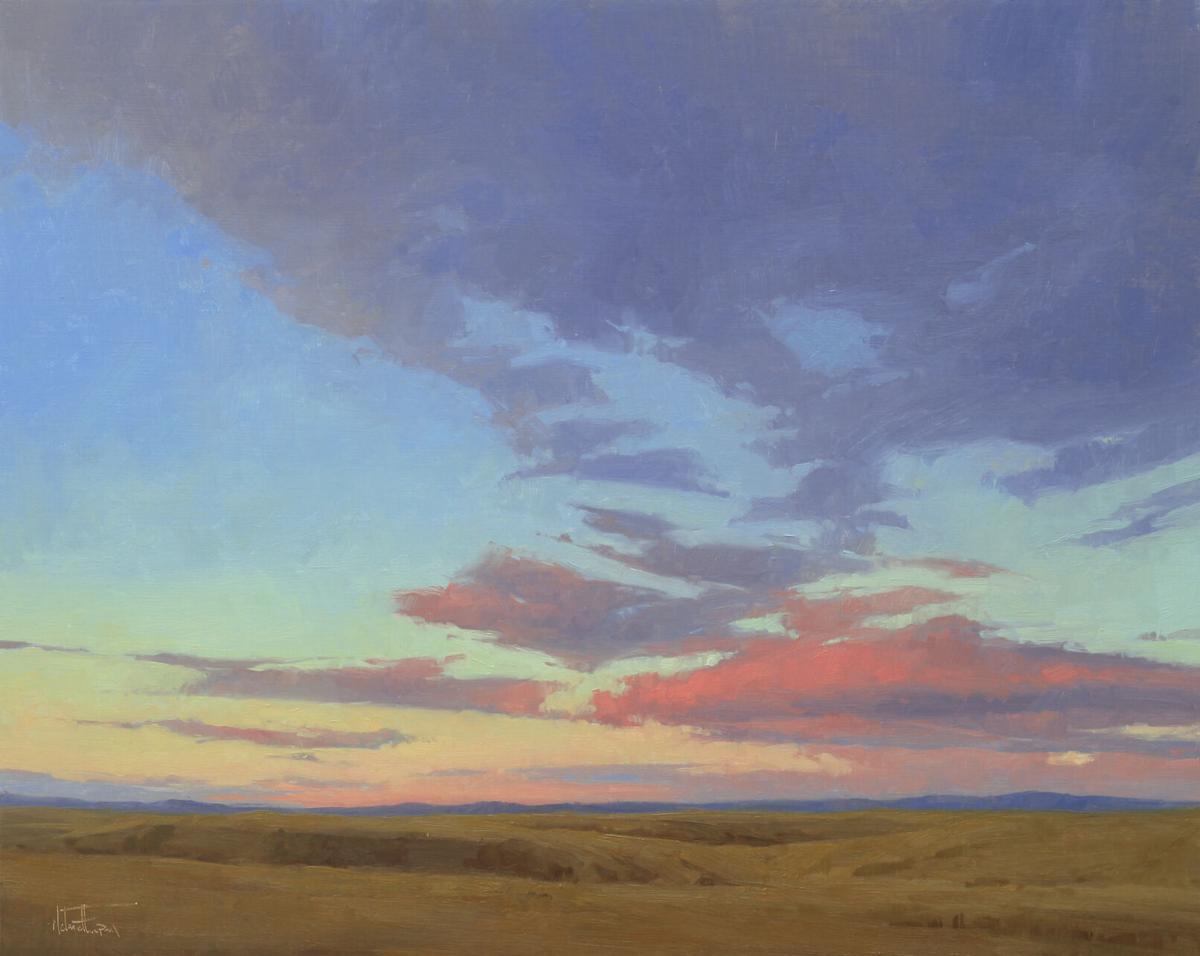 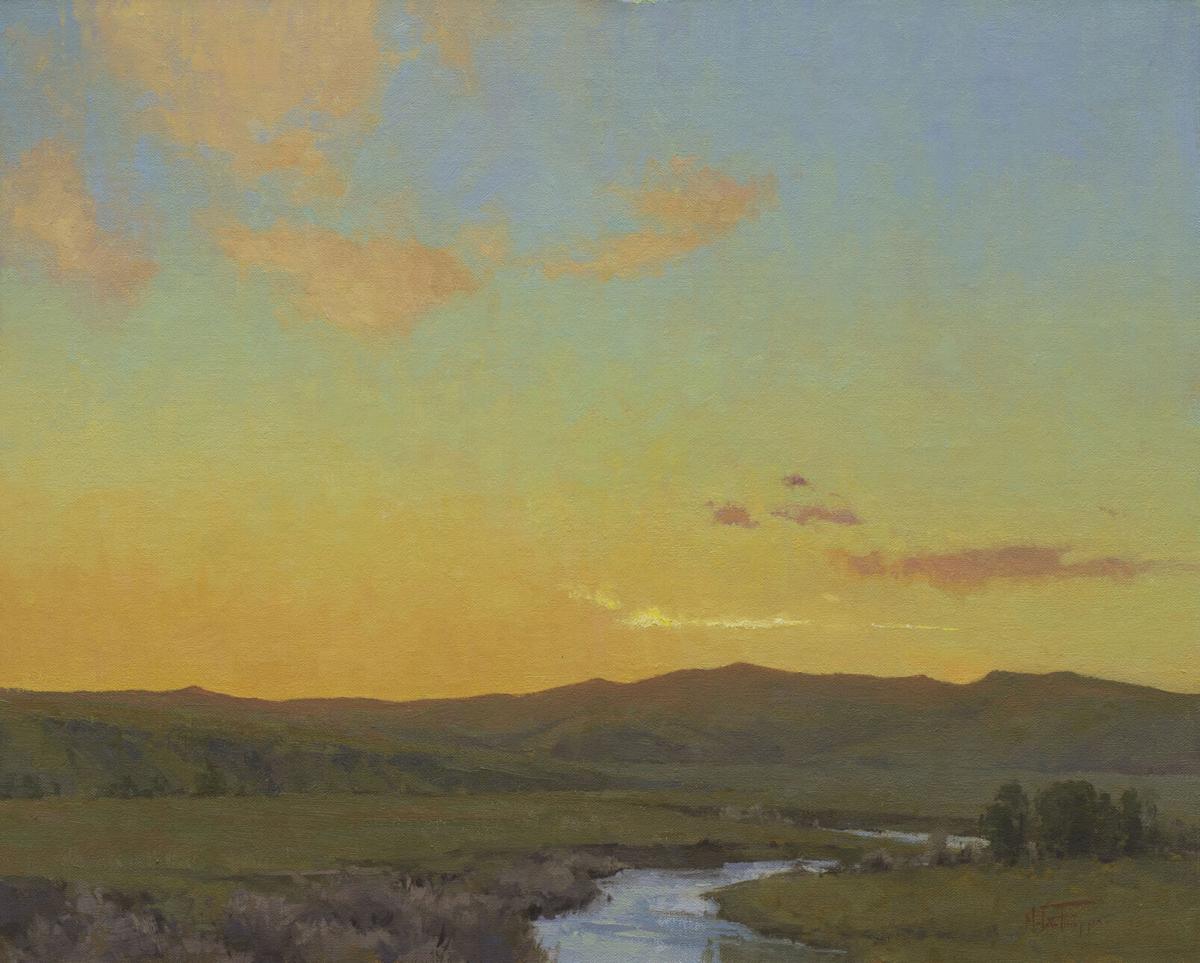 Peace on the Walla Walla by Melanie Thompson.

Sunshine and Rattlesnakes by Melanie Thompson.

Wear and Tear by Melanie Thompson.

Peace on the Walla Walla by Melanie Thompson.

Iconic western themes as these, rendered in rich layers of oil paint on canvas, have formed the foundation of 33-year-old Richland painter Melanie Thompson’s multi award-winning career in fine art, where the artist has been sweeping plein air competitions and nabbing distinctions such as “Best Emerging Artist” and “21 under 31 Artists to Watch” from Southwest Art magazine.

Yet the artist’s inspiration to capture such scenes was formed not in the creation of such beauty, but in the destruction of it — specifically the west’s wildfire seasons of 2007, 2009 and 2010. That’s when Thompson served as an “entry-level grunt” firefighter, cutting fire lines and digging trenches to starve fiery blazes in eastern Oregon.

“It wasn’t until I started firefighting in college that I felt the strong pull to paint the landscape,” Thompson said.

While grueling work — that sometimes required camping and hiking in a smoke-filled wilderness for weeks with a pack of gear that weighed over 30 pounds — it kindled a new perspective for Thompson, who grew up in a large family in the Tri-Cities and had been painting and drawing since she was a kid.

“There was this feeling of being surrounded by these enormous landscapes, these raging fires, of being really small in this big universe,” Thompson said. “It was a sense of awe that was completely overwhelming.”

Thompson studied graphic design at Washington State University and graduated with a degree in Digital Technology and Culture in 2010.

“I figured it was a practical degree that would use my artistic side,” Thompson said.

Ultimately, Thompson’s experiences in fire country helped steer her from a career behind a desk to one behind an easel under the open skies. She spent a few years in advertising, designing ads for the Tri-City Herald, followed by a stint in landscaping, before deciding to pursue painting full-time.

But she couldn’t get her compositions of areas such as Oregon’s Hell’s Canyon, scorched into her mind’s eye as the site of one of her biggest firefighting jobs, to capture the raw power of the land she felt as a firefighter.

“I spent about a year or so trying to paint watercolor landscapes, but they never turned out how I wanted them to be,” she said.

She turned to oil paint to help refine her style, and that’s when things really started to take off.

“The thick body of the paint, I was able to get the look I wanted,” Thompson said.

Thompson’s themes fit nicely within the grand canon of America-Western themes in art, and though she took a handful of conceptual art classes in college, the artist is mostly self-taught. She is influenced less by those considered American masters of the style like Albert Bierstadt or Frederic Remington than by contemporary artists such as Montana-based Clyde Aspevig and Coeur D’Alene’s George Carlson, two of her cited favorites.

“When I saw [Carlson’s] painting of Sentinel Gap, by Mattawa, then I see him winning a top prize for a view I’ve driven by a hundred times, I realized, you know, you don’t have to be painting Monument Valley [famous sandstone buttes in Arizona] to paint the west, you can paint eastern Washington.”

This sense of agency and intimate knowledge of place helps guide Thompson’s every brushstroke, capturing the winding curves of the Snake River, the endless views of the Columbia Basin at moonrise, the gentle peaks of Badger Canyon, practically just outside her door.

While Thompson has a studio in her home that she shares with her husband Daniel, and their 7-month-old son, Sean, the artist says she does her best work outside, where she can be among the elements to summon the feelings she first sensed as a firefighter.

“I‘ll always love painting outside more: smelling the air, feeling the wind and the sun, it makes it really feel like you can get all that into your painting.”

You can view Thompson’s work at Phinney Gallery of Fine Art in Joseph, Oregon, American Art Gallery in Tacoma, Washington, Corwin Gallery in Hamilton, Montana, and Rimrock Gallery in Prineville, Oregon, where she has a show in August.

Thompson will also participate in Pacific Northwest Plein Air 2021 and her work will be on view at the Maryhill Museum from August 1-28.