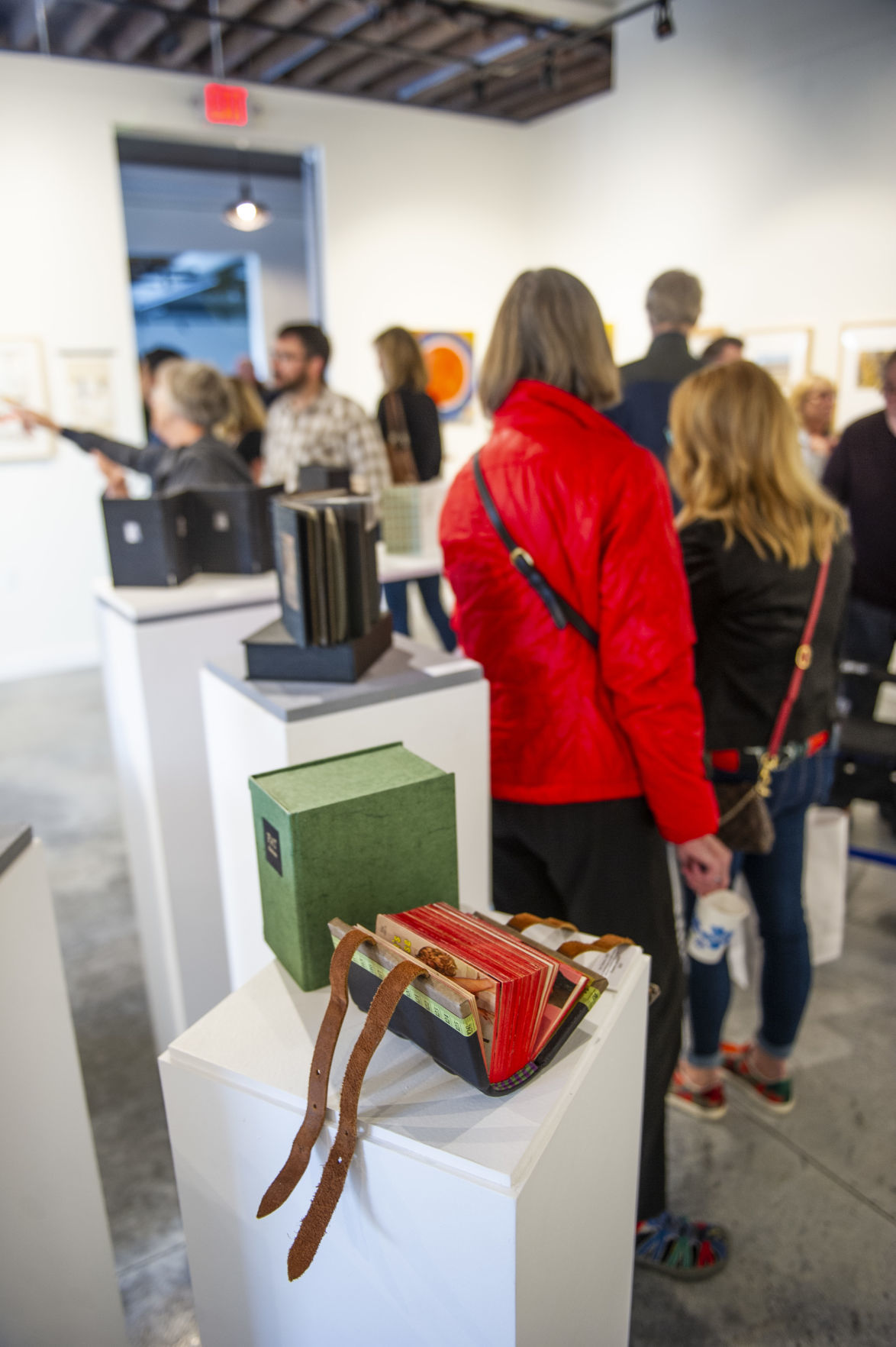 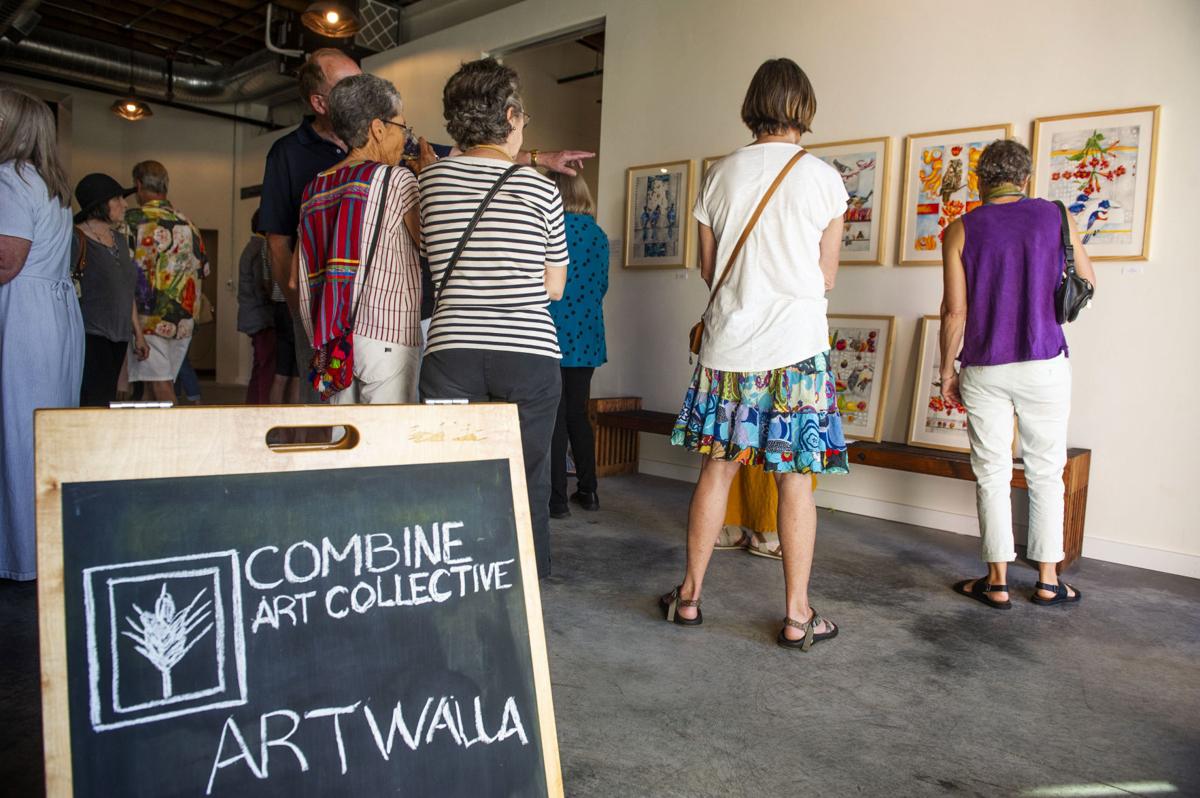 Patrons take in the artwork in the hallway during the September 6th Combine Art Collective event.

Patrons take in the artwork in the hallway during the September 6th Combine Art Collective event.

Combine Art Collective, downtown Walla Walla’s new spot for fine art, got its name in honor of the region’s history in agriculture.

“Combine,” though, is also a great word for what happens when six artists move to town at different times, cross paths, become friends, share a dream of having their own gallery and pool their respective knowledge of business and art to make it happen.

The gallery is TMacs easterly neighbor on the northern side of the massively made-over Showroom on Colville Street.

The longtime home to auto dealerships, including Teague Motor Co. and Legacy Ford, has been converted into a subdivided show piece anchored by TMacs restaurant and lounge and surrounded by an array of other complementary tenants.

Construction and design work from Seattle architecture firm Olson Kundig has integrated the art deco design of the original building with its vast arching wood rafters and industrial bones. The concrete floors have been refinished. New windows wrapping around the corner building bring a fresh perspective as the property changes gears from the automotive industry to food and retail.

At Combine, it all adds up to a bright, clean open space entered off Rose Street for the curated collections of what is expected to be upward of 15 artists at a time.

Nonprofit arts group ArtWalla is now a tenant of the gallery. The fit is a good one considering three of the six owners are current board members for the organization.

Plans for the spot, Woolley said, include a regular rotation of exhibits coming from the abundant production of regional artists. The opening featured the works of the collective founders, as well as 16 other invited artists.

That event was followed with a new feature of ArtWalla’s ArtSquared event. The fundraiser that invites artists to create 10 different pieces on 6-inch-by-6-inch squares — that’s more than 1,000 pieces from 113 artists — sells them as a fundraiser for arts education grants for $36 each. A new edition this year and hosted at the Combine Art Collective by the organization was the “11th Hour Sale” in which more than 100 additional and never seen before squares were released. As part of the sale of those pieces — the 11th for participating artists — 100% of the money raised was dedicated to the arts education grants.

By mid-November, Woolley said, visitors to the gallery should find it transformed into a spot for holiday shopping. Another boost of artists will bring the headcount to around 25, she said, with various pieces priced $25-$150 in a “Gift of Art” exhibit.

It’s the kind of mobility and adaptability the group wanted in order to showcase art and adjust to the seasons and dynamics at the same time.

Eventually, the intent is to build it all into a cooperative-style space where artists juried into membership help with a monthly payment and time commitment to the gallery.

“Our hope with that model is we build a team of 15 or so artists who will help give it a go and be willing to put a little more skin in the game,” Harding said.

The new gallery continues to build Walla Walla’s growing art scene. Home to the Walla Walla Foundry, a vibrant public art collection, respected university galleries, the nonprofit ArtWalla, and several other private galleries, the community can be hard to navigate if you don’t know where to look, Harding said.

That was her experience when she moved here 11 years ago after living in Portland and Central Oregon.

The more involved she became with ArtWalla, the more people she met, including the five partners in the collective.

The founding artists became friends after each moved here between 2000 and 2011, Woolley explained.

“I’d say as we each arrived in our own time, we began meeting each other almost immediately through some form or another in the art community,” she said. That includes through relationships and positions connected with Carnegie Art Center and ArtWalla. All have shown their work over the years in galleries and wineries throughout the Valley and region.

“Our common denominator is our love of producing, purchasing, and promoting the arts wherever we happen to be,” Woolley said.

With a range of managerial, marketing and other experience behind them professionally — their collective resumes include work for the Walt Disney Co., the Estée Lauder Companies Inc., city of Redmond (Ore.) Arts Commission, Portland YMCA, Microsoft, Whitman College, banking and wealth management, art fairs and pop-up exhibits and more — they have the acumen for it.

“All accomplished artists in our respective fields, we’ve all dreamed at one time or another of owning a gallery in town for our work and for that of the myriad artists that inhabit Walla Walla,” Woolley said.

Last April, after an ArtWalla meeting, several of them sat together and vowed to make it happen.

Within four days, Harding and Hooper were visiting with downtown property owner David Thompson, who let them see what was then the shell of the Showroom on Colville.

They developed a financial plan and outline for a limited liability company.

Woolson said the space is ideal not only for the rotation of exhibits, but also for arts education. Talks, demonstrations and other events will take place in the space, which has moveable interior walls to accommodate the needs of the gallery.

“The community of artists — that’s really important here,” she said. “We can keep changing things out and try new ideas. We want to do a lot of different things here.”