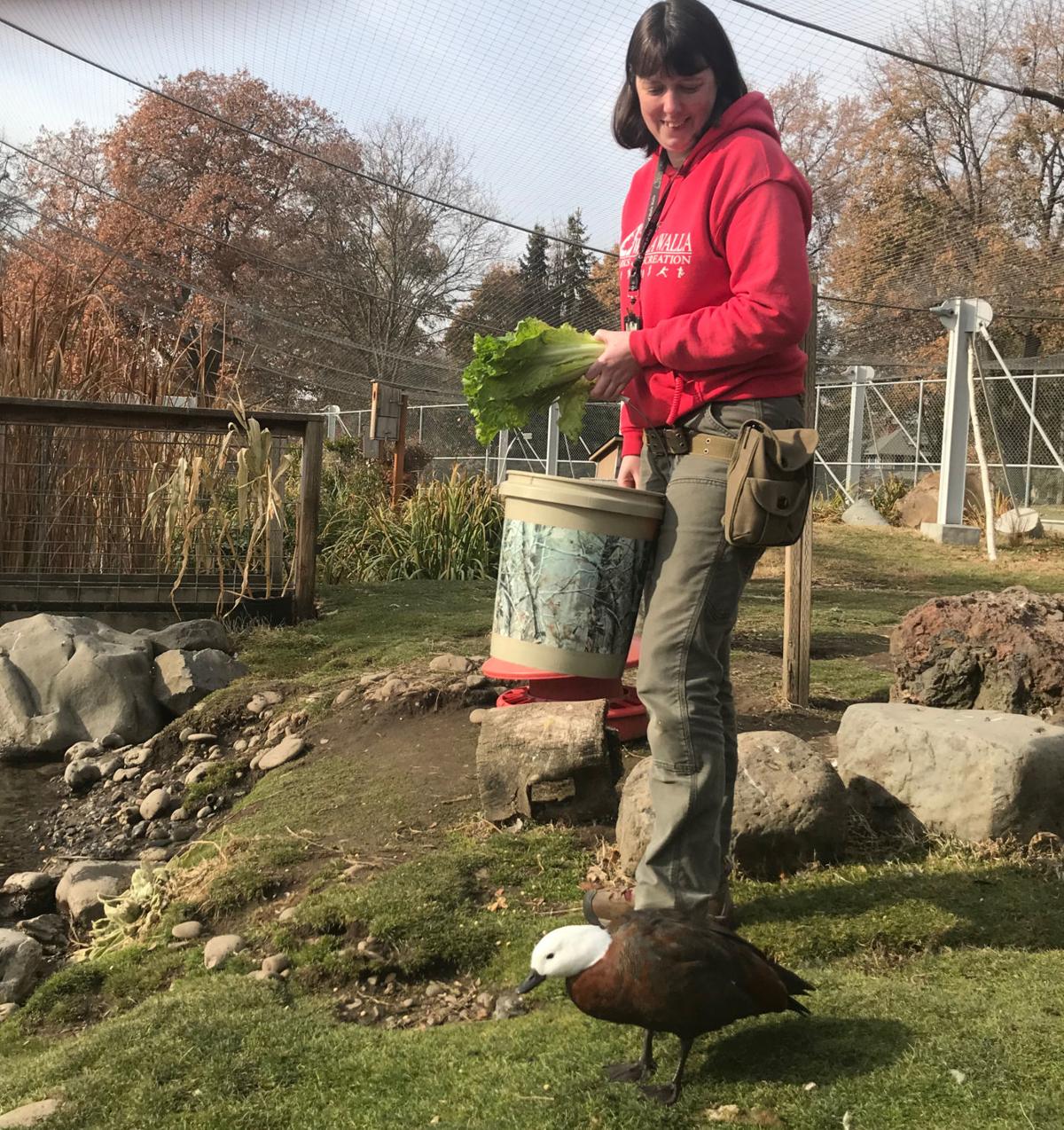 Becky Donley’s protector and shadow, Sheila the paradise shell duck, keeps a watchful eye out for interlopers while Donley loads waterfowl food into the feeders, a daily duty. The birds empty them out within 24 hours. A nesting box stands behind her. 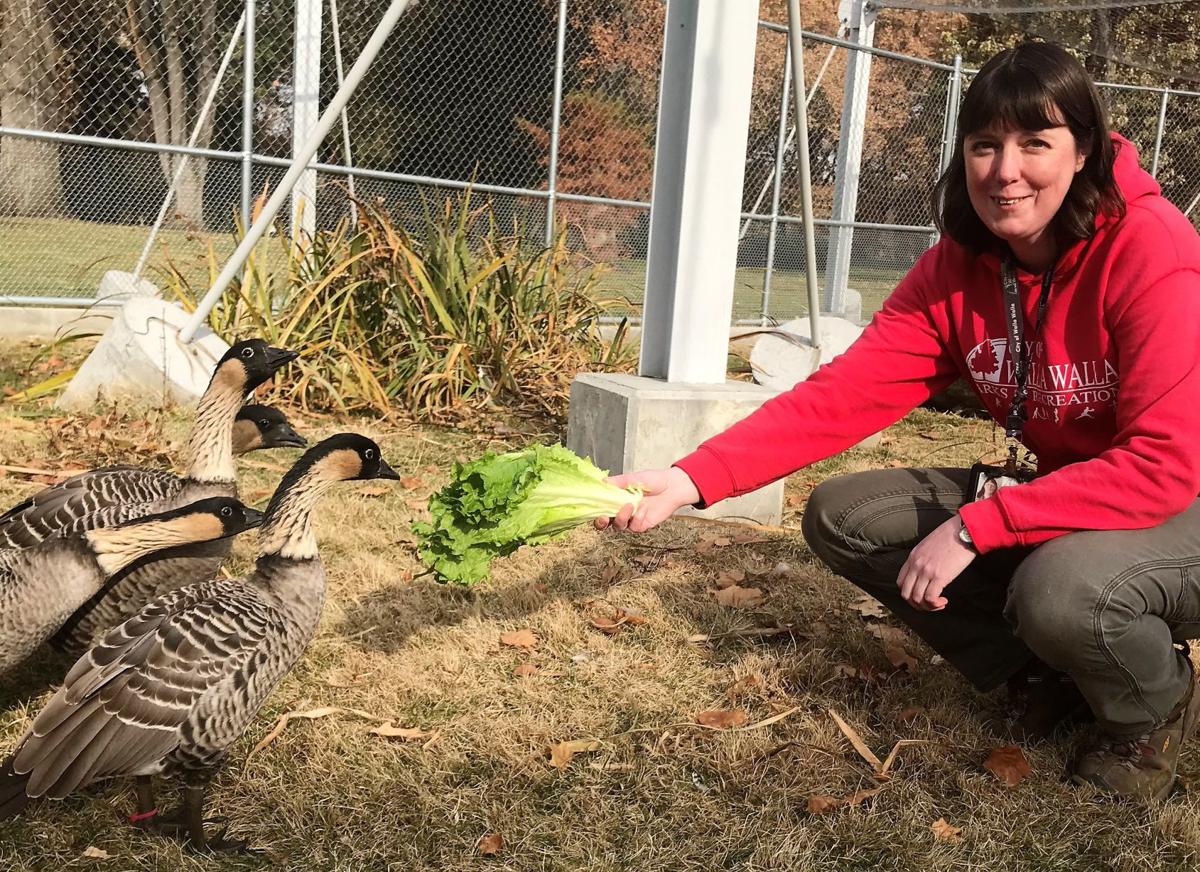 A family of NeNe geese crowds Donley’s salad bar as she extends a head of romaine lettuce for them. Unsightly produce is donated to the aviary by local grocers.

Becky Donley’s protector and shadow, Sheila the paradise shell duck, keeps a watchful eye out for interlopers while Donley loads waterfowl food into the feeders, a daily duty. The birds empty them out within 24 hours. A nesting box stands behind her.

A family of NeNe geese crowds Donley’s salad bar as she extends a head of romaine lettuce for them. Unsightly produce is donated to the aviary by local grocers.

A white-headed feathered friend is the first to squawk good morning to Pioneer Park’s aviary caretaker around the duck pond and is the one most reluctant to let Becky Donley slip out.

“She’s my Sheila,” says Donley. “She’s my guard duck. She thinks I’m her mate.” And such is their affection for each other, that Donley herself sports a new colorful tattoo on her calf — of Sheila, the paradise shell duck, a breed native to New Zealand.

For Donley, 39, taking care of about 17 species of Galliformes (pheasants, quail, peafowl), and 27 species of Anseriformes (ducks and geese), all is a degree come true for her.

Despite college degrees in art, it is Donley’s 2011 sheepskin in wildlife ecology that truly makes her day.

She works the aviary from 7 a.m. to noon, Monday through Friday, and then rounds out her 55-60-hour work week clerking at the local BiMart. With her wildlife degree, Donley says she initially thought fish study would be her fate. Instead of fins, she got feathers.

“It’s kind of a miracle I got this job,” she beams. “I like being with animals, kind of learning as you go. I just wish it were full time.”

Donley took time from her feeding, cleaning, and nurturing tasks to talk before spring’s eggs, the incubator, and the “babies” demand more of her mornings.

Lifestyles: Where do the birds come from? And where are you from too?

Donley: I’m from Walla Walla, at least since I was 7. And the birds, I order or exchange them, though none are from out of the country. The black swans, for example, are from Florida. They all pretty much fly in. By two-day shipping, that is. They are all happy to get out of the box.

LS: How do you cope with the death or loss of your resident birds?

Donley: I’m getting used to it. It’s weird, I don’t have any histories on the birds, though I know some of them are old. And there are ones I trade or sell for the aviary. Most of what I hatch I sell because that helps raise funds for aviary food and supplies. A pallet of food every two months is twenty 50-pound bags — so 1,000 pounds. I haul it myself even though park staff guys have offered to do it for me. That food costs $830. The donation box helps, maybe $100 in the spring but only $15 in winter. I don’t want to discourage donors. Still it’s the city that pays out something like $80,000 for the aviary, the weekend assistant, and me. Birds have been free roaming here since the ’40s, the Lionesses dedicated the enclosures in ’83. In the past few years, it almost shut down. It was Friends of the Pioneer Park Aviary, a grant, and funds donated by the public, which raised half a million to keep it up and running for a while. And I think the steel beams (for the new enclosure) were donated. I feel the city will continue to fund it because if they tried to close it, people of the city will go, “Oh, no you don’t.” It’s a great educational and entertainment resource.

LS: What kind of visitors do you notice?

Donley: Regulars make this their morning routine, family groups, people from out of town. They often say, “Wow, this is a great place you got here.” I always ask them where they’re from. Most from Seattle, Portland, but back East too — New York, even Japan.

Once a visitor asked me, “How do you think the birds feel about being in pens?” I’d been expecting this question. Aviaries like this have actually saved species through captive breeding. These, 100 years removed from the wild, have never known not being fed. (Aviaries) have kept them from going the way of the dodo. We currently have two endangered species: the NeNe geese and Laysan teal. At one point there were only 12 Laysans left in the world.

LS: How do you protect yourself from the birds?

Donley: I wear gloves mostly because I don’t want to reach my hands into some bird poop. Canvas pants, they’re thick, and steel-toed boots.

Donley: The uncertainty. I’m not sure what I’ll show up to (in the birds’ environs) each day. I try to do as much research as possible, say, looking for community nesters, just making sure everyone gets along.

LS: Got any battle scars?

Donley: A peacock got me a little while ago. And the silver pheasant’s spurs attacked me last week. I have a nice little scar on my hand now. Some are just sweethearts. Some are just mean.

LS: Has anything funny happened to you?

Donley: Well, the project to thin out the water iris was one. Got into my waders, and there I am waist deep, pulling, pulling, and down I went a couple times. I don’t swim either! Adrenaline gets going. I’ve joked, “if I ever just go missing, go poking in the pond.”

Donley: I know the birds don’t “love” me, but when I open the door in the morning, and they see me coming with the bucket of food, they get so excited. And in the spring, when the babies are hatching.

[The job] is stressful. At the same time, it’s stress relief being outside. Going outside on a nice day, looking around and going, “This is my office.”