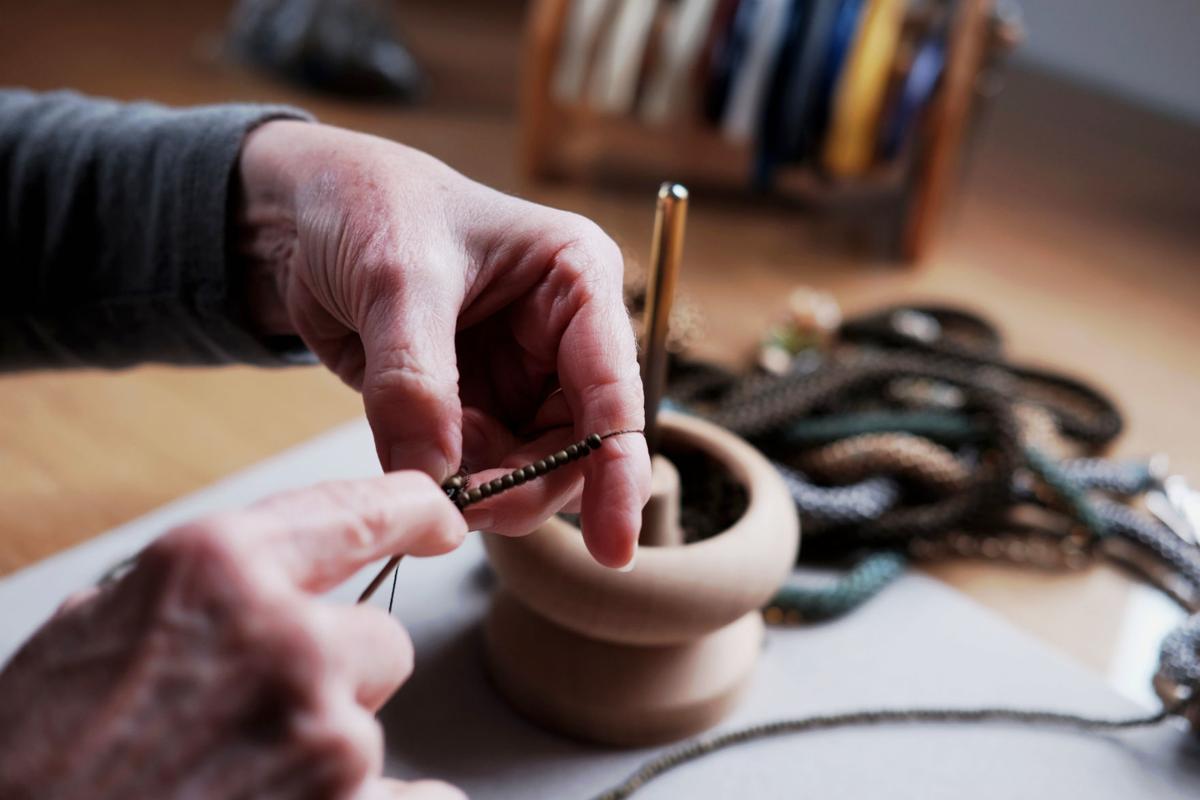 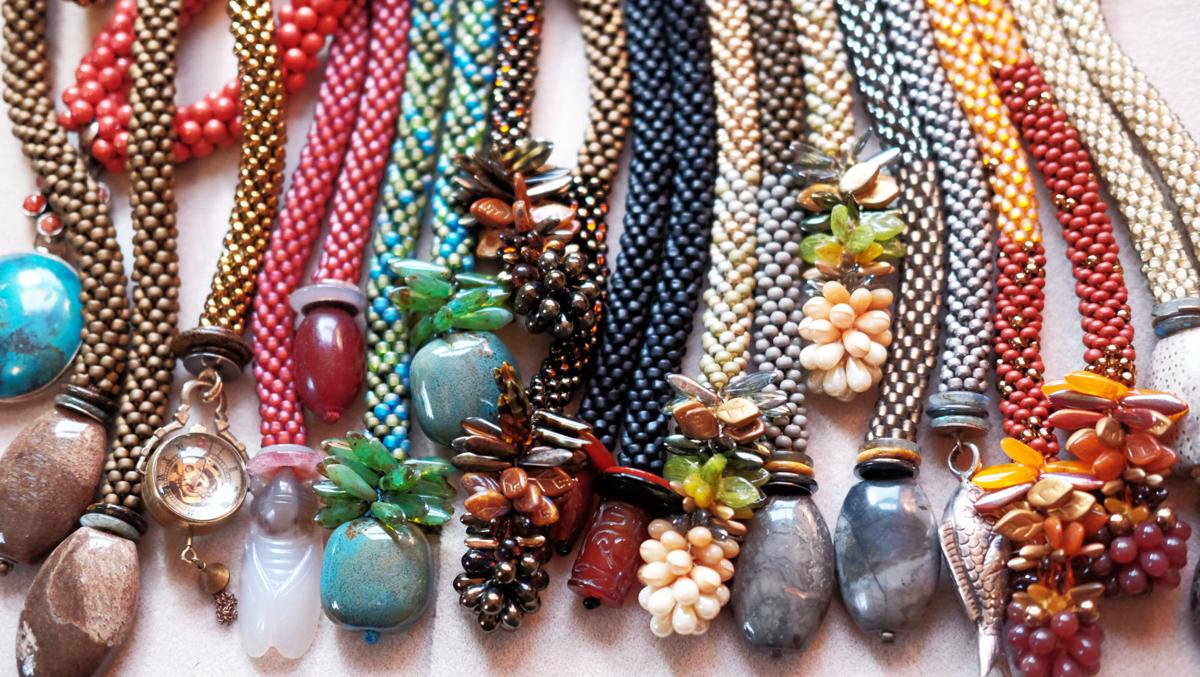 An array of Catherine Hysell's jewlery.

Hysell wearing one of her signature rope necklaces.

An array of Catherine Hysell's jewlery.

Hysell wearing one of her signature rope necklaces.

Catherine Hysell is in her Walla Walla studio spinning thousands of tiny glass beads onto a length of nylon thread.

Once she has a strand long enough to work with, she grabs a crochet hook and, using a special knotting technique, begins knotting the thread into long, surprisingly fluid, colorful rope.

The rope will form the basis of a bracelet, long necklace, or choker, which may be embellished with semi-precious stones or large decorative beads.

Bead crochet is a time-consuming process that has occupied countless hours over the 20 years since Hysell first learned her craft.

She had been making delicate beaded jewelry for herself and friends but had no experience in needlework when she signed up for a workshop in bead crochet, a technique popularized in the 1920s flapper era. After five fumbling hours, Hysell laughs, she had produced a two-inch rope.

Eventually, the process of crocheting beads became relaxing and meditative for Hysell and she loved the look and feel of end product.

“I love how tactile and serpentine the rope is,” says Hysell. “Since it’s hollow it’s lighter than it looks and when worn it takes on the warmth of the body.”

Hysell’s friends loved the beaded ropes too. Indeed, so many were requesting her work that she decided to leave her career as a licensed clinical social worker and devote all her time to crafting beaded jewelry.

Soon, her wearable art was being sold in galleries and fine jewelry stores in New York, Chicago, Seattle and elsewhere.

Hysell’s passion for design has familial roots. Her father is an architect with an international portfolio and her mother is a visual artist. As a result of her father’s work, the family lived in cities across the United States and did a stint in Riyadh, Saudi Arabia.

Whenever possible, the family traveled.

“I’ve had the good fortune to visit all the European countries, the UK, Mexico, Africa, India, China and Hong Kong,” says Hysell.

She credits her travels, particularly her trips to India, for having shaped her aesthetic style.

Hysell was living in San Diego and her parents in Sonoma, Calif., when they started exploring a joint move. It was important for them to find a community that had colleges or universities, good health care, and a vibrant arts scene.

After a weekend of Walla Walla wine tasting, they knew they’d found their next home.

“Walla Walla is the first small city I’ve lived in,” says Hysell, “I’m blown away by how welcoming and friendly people are and the strong sense of community here.”

Hysell moved into a small bungalow near the Whitman College campus and converted one bedroom into her studio — a light filled room with colorful stacks of containers holding beads from Japan, Czechoslovakia and elsewhere.

When not in her studio, Hysell is often found managing store displays at Sweetwater Paper and Home on the corner of Alder Street and First Avenue in downtown Walla Walla. Her line of delicate Indian-inspired earrings is available for purchase at the store.

Hysell’s beaded rope jewelry is also sold at Falkenberg’s Jewelry on Main Street in Walla Walla and through her website, www.catherinehysell.com.

During the month of February, her work will be featured as part of a jewelry show at Combine Art Collective on Colville Street in Walla Walla.