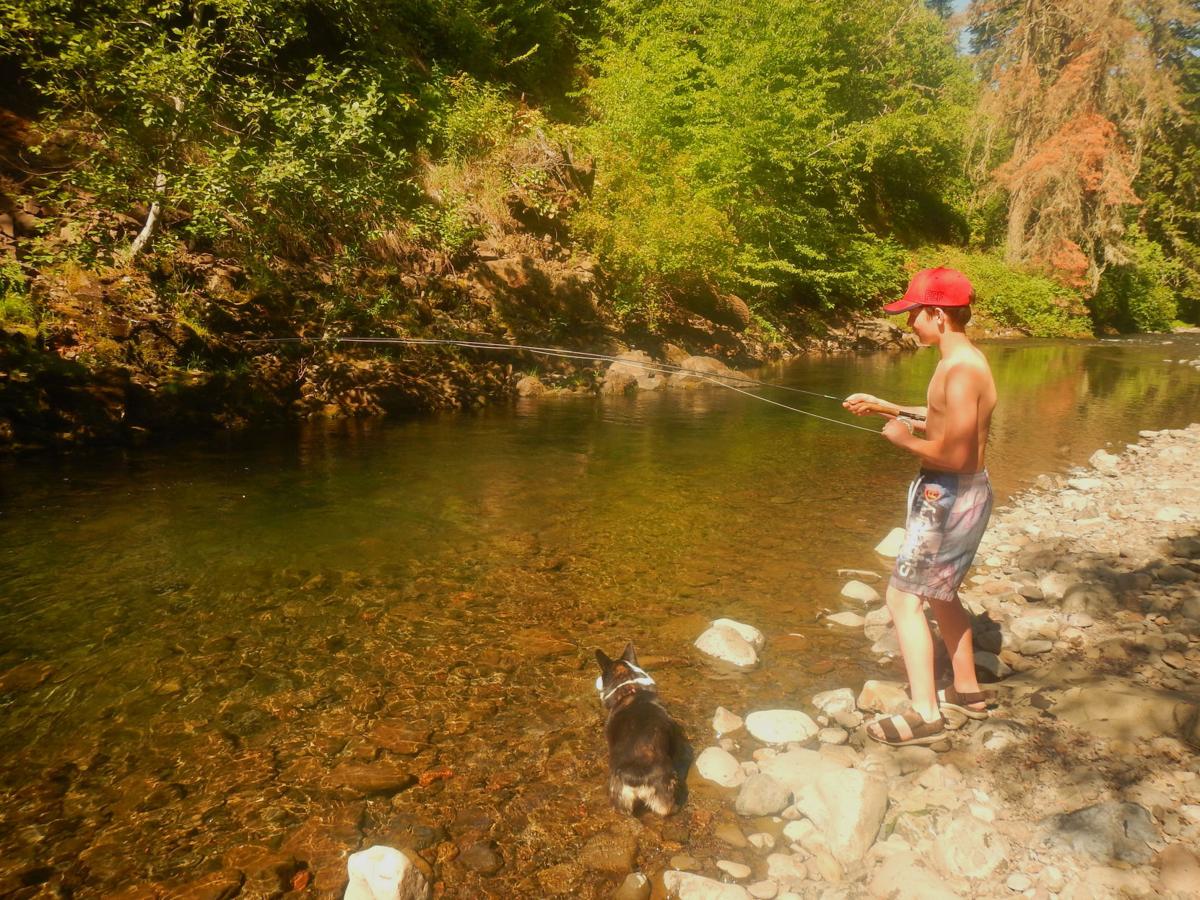 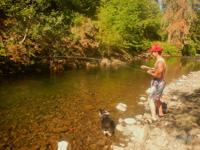 Adam Dauble holds tight to his fly rod when fighting a mountain whitefish in the Umatilla River in the Blue Mountains while our corgi, Lucy, waits to herd it to shore. 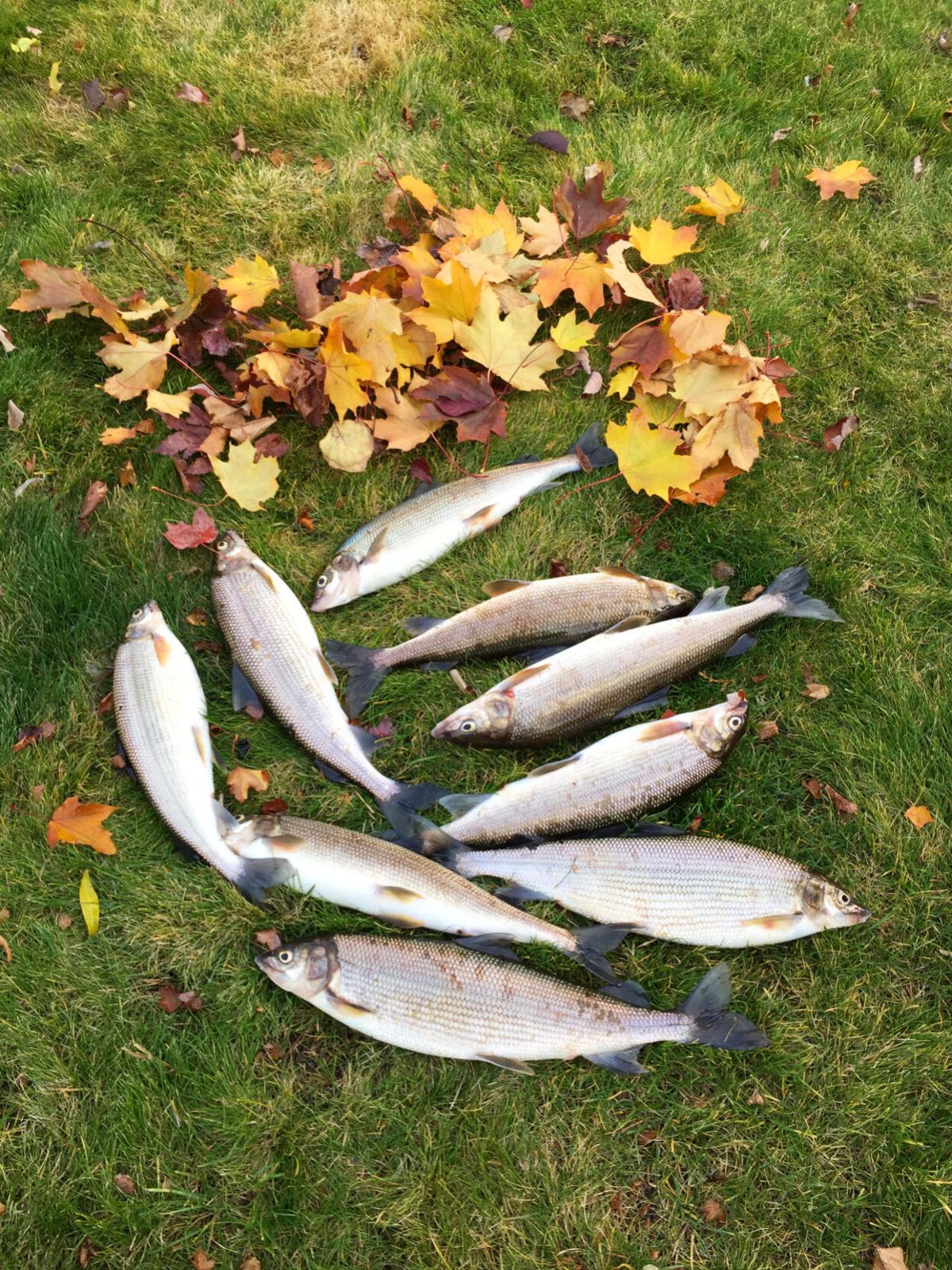 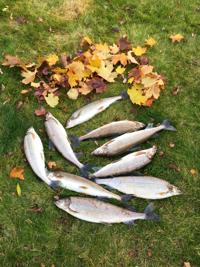 This nice catch of mountain whitefish from the Hanford Reach of the Columbia River is destined for a Little Chief smoker. 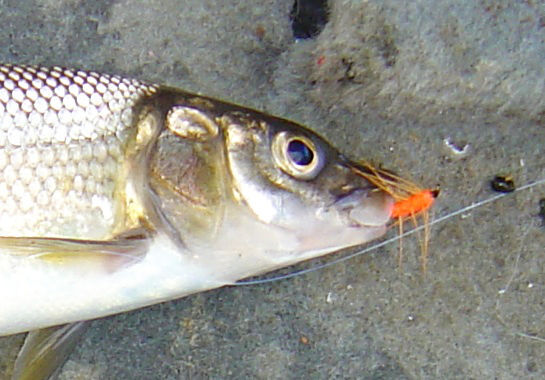 An effective lure for mountain whitefish in the fall is a small orange or red hackle fly tipped with a maggot.

Adam Dauble holds tight to his fly rod when fighting a mountain whitefish in the Umatilla River in the Blue Mountains while our corgi, Lucy, waits to herd it to shore.

This nice catch of mountain whitefish from the Hanford Reach of the Columbia River is destined for a Little Chief smoker.

An effective lure for mountain whitefish in the fall is a small orange or red hackle fly tipped with a maggot.

More than once over the past several years I’ve peered into a clear Blue Mountain stream and seen several grayish-colored fish holding near the bottom.

My first thought is “big trout!” and I try my hardest to raise them to a fly. When attempts fail, I write them off as suckers.

Only upon further observation is their true heritage revealed. These schooling fish are mountain whitefish whose feeding habits lead to a distinctive flash of silver when they turn to poke their pointed mouth into the crevices of smooth river cobble.

Whitefish are an interesting and diverse group of fishes whose distribution extends north on the western slopes of the Rocky Mountains from Nevada to the Yukon-British Columbia border in Canada.

The Alaskan sheefish, or iconna, which weigh up to 60 pounds, and the pygmy, which top out at 8 inches long, represent the big and the small of the extended whitefish family.

Closely related to salmon and trout, whitefish are often misrepresented. For example, Lewis and Clark referred to the Rocky Mountain whitefish as “bottlenose” during their travel through the upper Missouri River drainage in 1804.

In the latter part of the 19th century, clever vendors sold whitefish as “mountain herring” to delicatessens in Salt Lake City. Many modern-day anglers have confused them with Arctic grayling and others consider them to be trash fish.

Once hooked, mountain whitefish make slashing runs and occasionally break the water’s surface. Where bait fishing is legal, anglers drift stonefly nymphs, caddisfly larvae, or winged grasshoppers along the bottom. A red or orange hackle fly tipped with a tiny maggot is another popular choice. One whitefish aficionado wrote to me to share how he stored frozen maggots in his mouth to speed up the process of re-baiting his hook.

In the Hanford Reach area of the Columbia River, I bundle up in insulated bibs and escape from Thanksgiving celebration to drift a faux salmon egg or orange bead pinned above a No. 12 snelled hook. Whitefish gather in large numbers near fall Chinook salmon spawning areas in November, attracted to the rich protein source available from loose salmon eggs.

Fly fishing also provides good sport. Small beadhead patterns that include Prince Nymph and Pheasant tail, sizes No. 16-20, will trigger a strike when drifted slowly along the bottom. A Czech or European nymphing method can be effective as are double-nymph setups under a strike indicator or Thingamabobber.

With a liberal 15-fish daily harvest limit in Washington (no catch limit in Oregon), you should harbor no remorse over taking whitefish home for dinner. A skinless filet of these mild-tasting fishes provides an excellent base for chowder. I lightly smoke my seasonal catch in a Little Chief smoker until the bones and skin can be removed with your fingers.

Consider preparing the roe of mountain whitefish for poor man’s caviar. Cut a fully developed roe sack into two-inch chunks and brine them for five to 10 minutes in a solution of 1/2 cup kosher salt to one quart of ice cold water. Separate the membrane, place the glossy, jewel-like orange eggs in a glass jar to seal, and store in the refrigerator for up to a week. Try the end product on toast, blinis, or unsalted crackers — with a smear of crème fraiche — for a unique holiday treat.

This past August my youngest grandson reminisced about an 18-inch mountain whitefish he caught and released in a bedrock-lined pool near our cabin on the Umatilla River.

“Do you think whitefish survived last winter’s flood?” he asked.

“There is one way to find out,” I replied.

Adam read my mind. Before I could count to 10, he stripped down to his shorts, strapped on goggles, and eased into the head of the deep hole. He drifted face down where the current curled alongside a moss-covered boulder before easing to the shallows and pulling off his goggles.

“They came back!” he shouted. “I counted a dozen.” Adam shivered from his cool dip but a broad smile revealed how happy he was to find them.

It’s been several decades, but the faded image of a fat, 14-inch mountain whitefish rising to my fly in a shaded pool on the North Fork Umatilla River remains in my memory bank. Some things about fishing you don’t forget.

What’s great about my recent summer day on the river with Adam is knowing mountain whitefish also evoke pleasant memories for him.