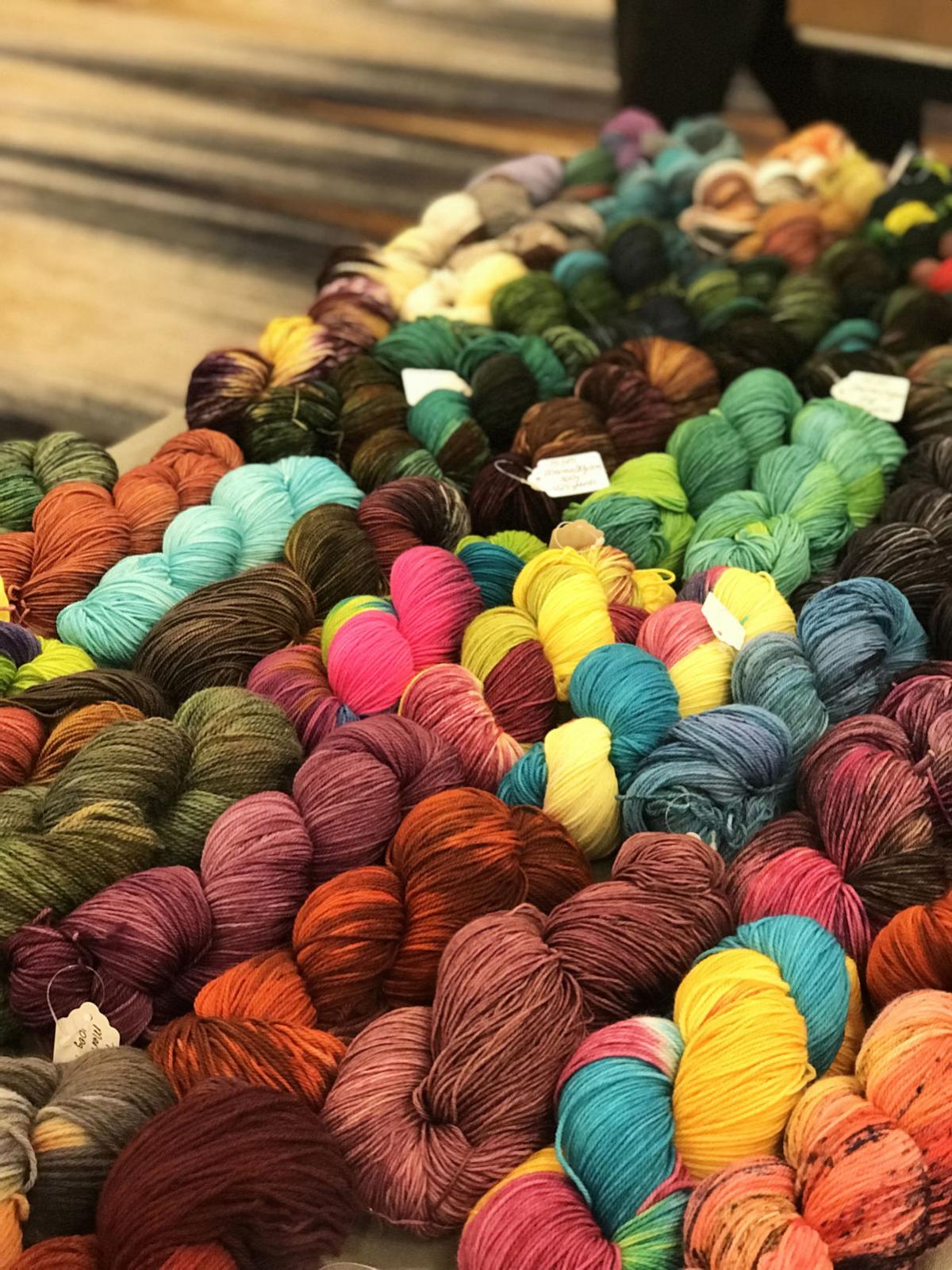 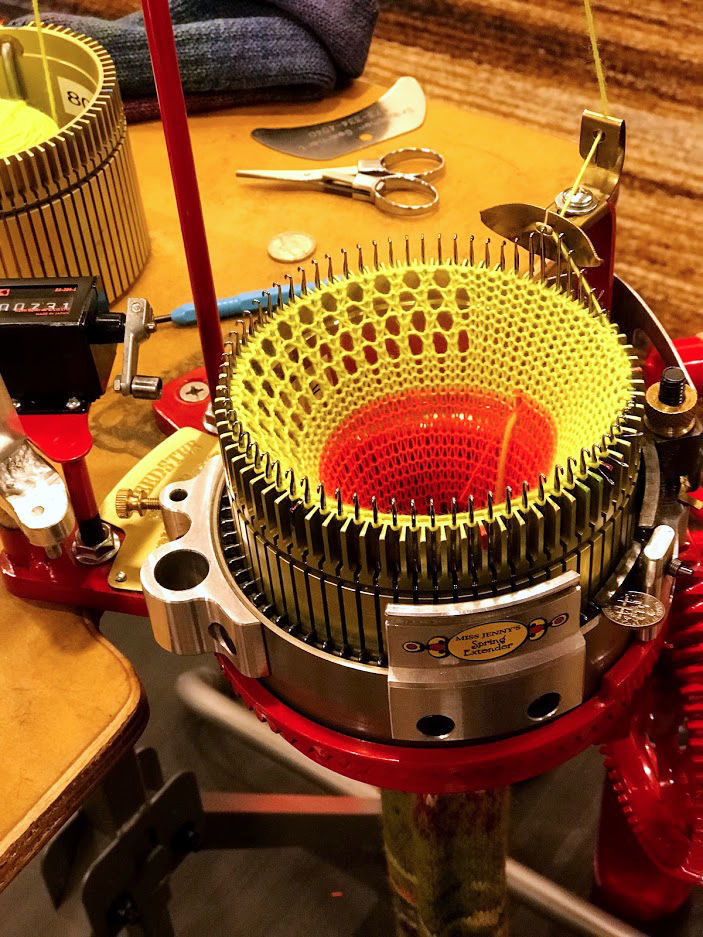 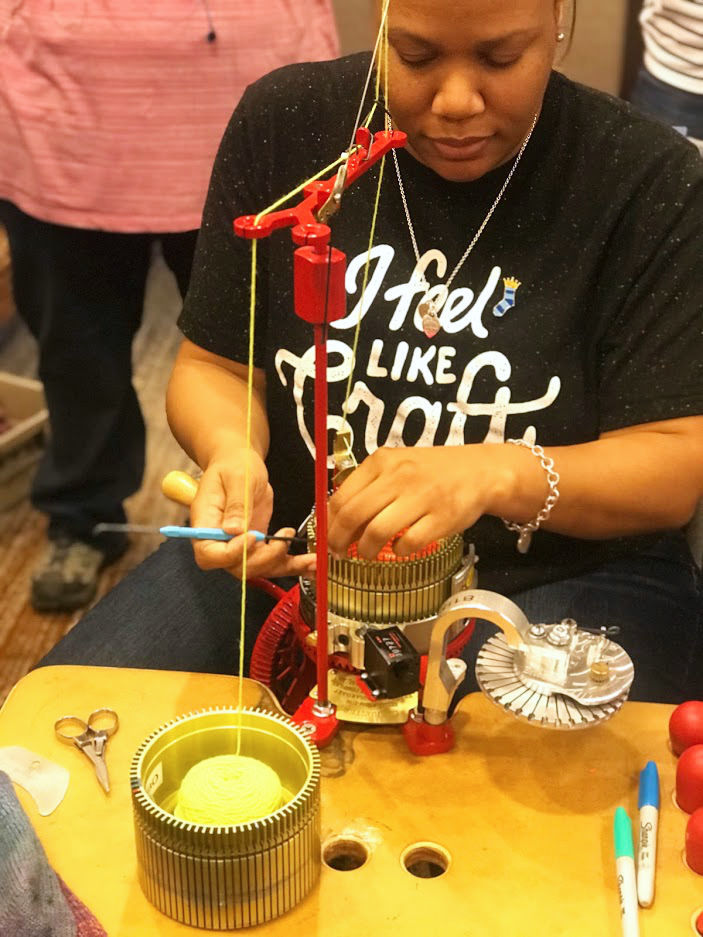 I will admit to being Pinterest-challenged but I recently met up with a group of women, men and teens who were anything but.

I spent a soggy spring day inside at the Marriott Courtyard where Andy Valentine and her group of knitters, artist and even some beginners spent the weekend at the third-annual Walla Walla Valley Circular Sock Machine CRANK-IN. The title is a mouthful and the event was an eyeful.

Over a dozen artisans all hard at work using old and new versions of the sock knitting machine. Never heard of it? That’s OK, I hadn’t either, but watching these crafty people and artisans was mesmerizing.

The event itself drew knitters from Spokane, Puyallup, Seattle and even as far away as Washington D.C.

Originally, these sock knitting machines were built during World War I and given to women to help aid the battle against “trench foot.” Once it was discovered that the simple act of knitting socks from wool instead of cotton could help curb the debilitating disease, the U.S. government decided to use one of their greatest assets — local citizens and housewives.

The government gave the machines to women all over the country during the war and asked them to make an allocation of wool socks. Once the women reached their quota they were allowed to keep the machine.

Now the tradition of hand made socks has regained popularity, no longer out of necessity to save feet but in the battle of quality over quantity. The Circular Sock Knitting Machine Society is just one of hundreds of small groups that seek out grant funding and recognition for people who desire and appreciate quality, hand-made products — those who understand the value in time and tradition.

Most of the knitters admitted that using the Crank Sock Knitting Machine can come with a bit of a steep learning curve although the payoff is a peace that comes from the daily practice of knitting.

As I watched the group working individually on their pieces there was a hum in the room — a type of collective learning as they leaned over to assess other’s work and take home some little tips and hints to help with their own hobbies and businesses back in their hometowns, basements, sewing rooms and shops.

They also all had one other thing in common — an addiction of sorts. Many of the knitters spoke of secret stashes of yarn tucked away just waiting for that perfect pattern. Hours spent trolling sock junky sites and hoarding knitting patterns for a rainy day or weekend.

Valentine is the organizer of the Crank-In and founding member of the Walla Walla Division of the Circular Sock Knitting Machine Society. She worked through a national grant process that supports small local events centered around hand work and the art of hand craftsmanship to apply and receive a grant to bring in a nationally known artist and special guest, Rosalyn Keys from Washington D.C. Keys is well known within the fiber arts and knitting communities and while I was there she demonstrated one of her favorite patterns the “Holy Moly.”

This delicate yet strong sock jumped out with vibrant colors and a lace-like pattern. The machine itself consists of a series of needles that are adjusted as colorful yarn works its way seemingly magically. The artist adjusts each run of the yarn to accommodate the toe, heel and the color pattern of the sock.

Fiber arts in general has been in the middle of a resurgence across the country; schools, classes, clubs and associations have all begun popping up to support the fiber arts movement.

There are schools across the country, many right here in the Pacific Northwest. There are local community college classes and independent courses in Seattle and Spokane.

If you aren’t quite ready to jump in and start “cranking” out socks, just spend an afternoon down at the local knitter paradise, Purl2 on Main Street in downtown Walla Walla. Just a walk around the store is an education and the and inventory will knock your socks off (I’ve been holding off on that pun until now).

Once you think you are ready to dive into some knitting then you’ll want to ask for, Ann Glassley, knitter extraordinaire, who teaches weekly knitting classes and has a knit group that meets every Friday at Hot Mama’s Espresso on West Pine Street in Walla Walla.

I learned that knitting is more than just a show-off photo on your Pinterest page; it is a real art form and small independent fiber artists are changing the way we think about shopping and dressing. And that is always a good thing.