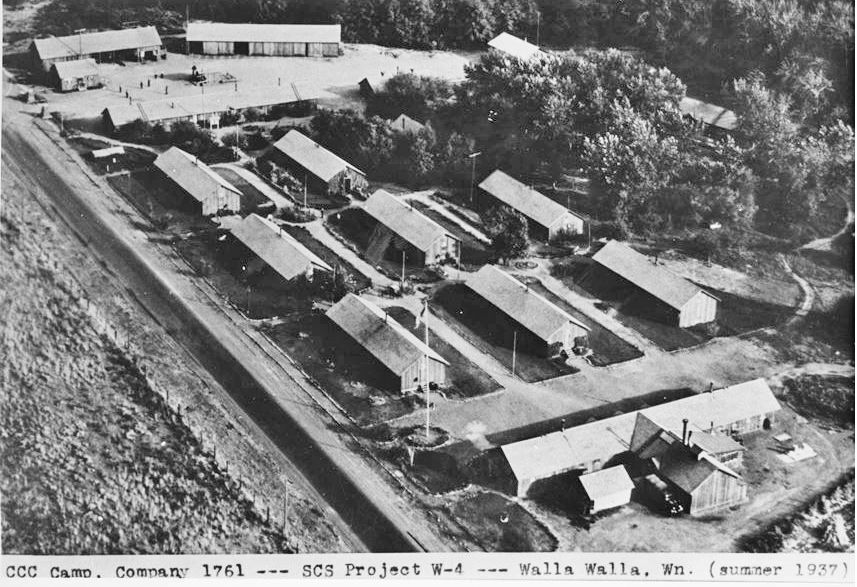 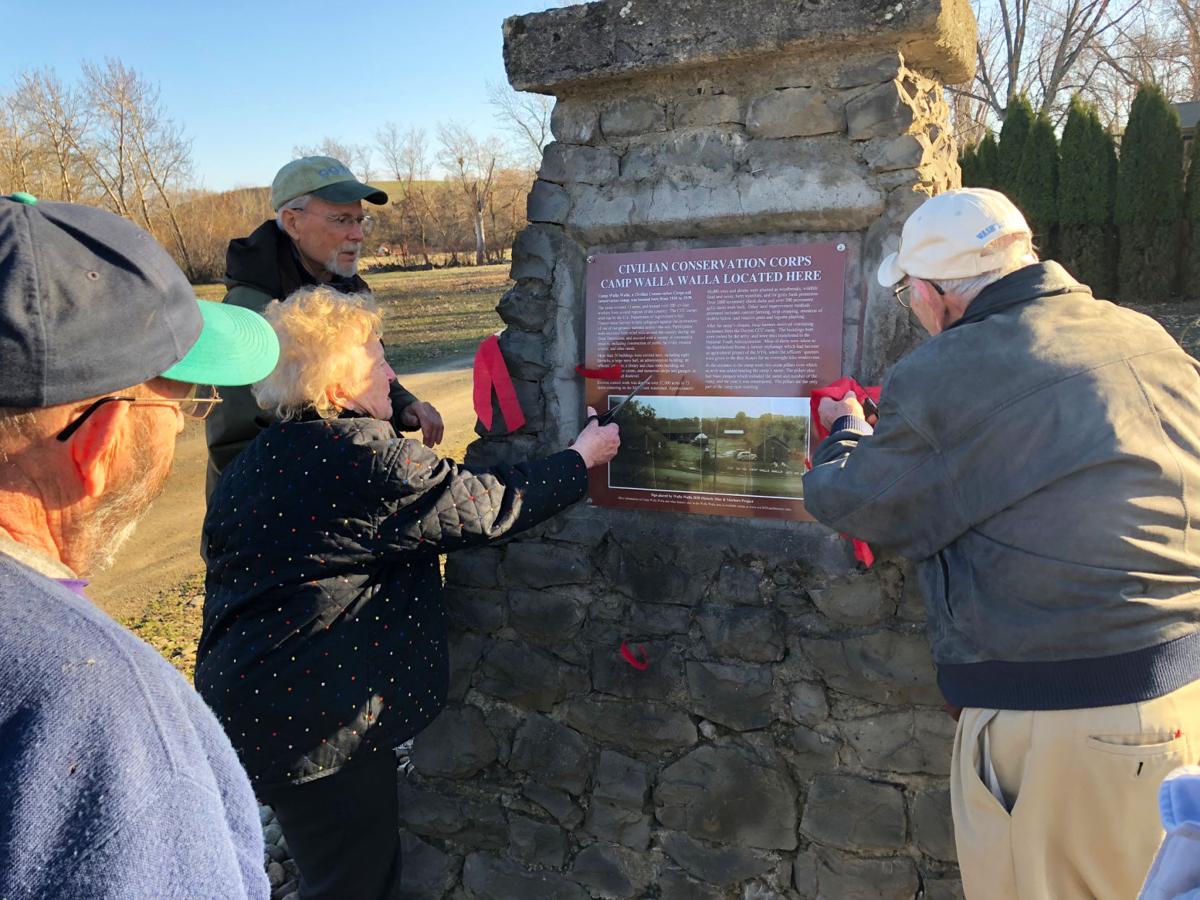 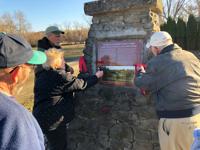 Dedication of the Walla Walla 2020 interpretive plaque at the site of the CCC Camp Walla Walla on Mill Creek Road, May 27, 2018. 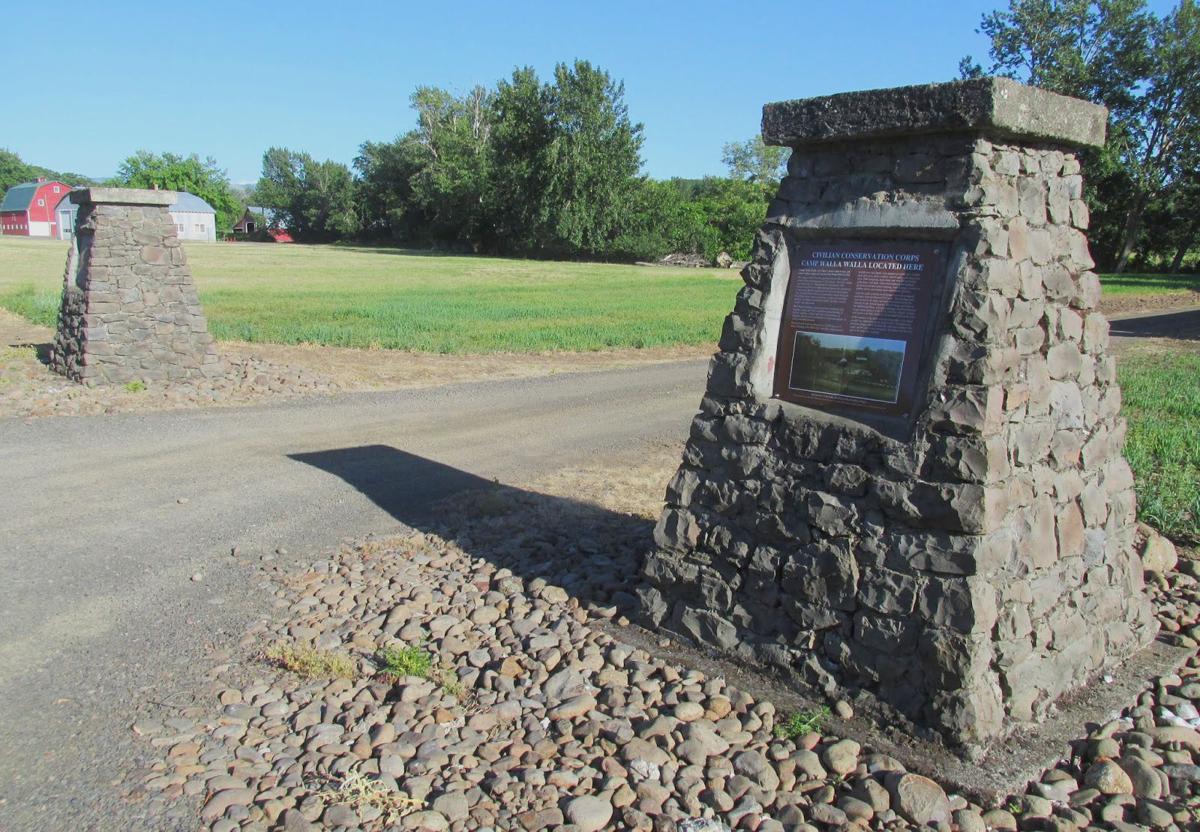 These stone pillars located at the former entrance to the camp are likely all that remains of Camp Walla Walla.

Dedication of the Walla Walla 2020 interpretive plaque at the site of the CCC Camp Walla Walla on Mill Creek Road, May 27, 2018.

These stone pillars located at the former entrance to the camp are likely all that remains of Camp Walla Walla.

During these trying times it may feel as though our current economic situation is unprecedented. However, history reminds us that this is not the first time the country has had to cope with a time of deep economic hardship.

During the Great Depression that followed, the Civilian Conservation Corps — abbreviated to CCC — was established in 1933 by Congress at the urging of President Franklin Delano Roosevelt. It was formed to address the unemployment of young, unmarried men, ages 17–28.

The CCC established a far-ranging variety of camps and projects nationwide, including road building and constructing facilities and infrastructure in national and state parks.

Participants signed up for six months with the option to renew their service. They received $30 per month, the same pay rate as the U.S. Army at the time. They were allowed to keep $5 and the rest was sent to their families.

Many of the participants also learned skills and received training that would prepare them for jobs in the post-Depression period. About 500,000 men participated nationwide.

CCC camps were established at Pomeroy and Dayton, and Camp Walla Walla was established on Mill Creek Road about five miles east of downtown in 1935.

The camp, managed by the U.S. Army, worked with the U.S. Department of Agriculture’s Soil Conservation Service, concentrating on soil conservation around the Mill Creek watershed, as well as assisting with community projects and construction.

Dan Clark of Walla Walla 2020 recounted in November 2017 in the Walla Walla Union-Bulletin, “CCC members performed erosion-control work on over 32,000 acres in 73 farms centering on the Mill Creek Watershed. Approximately 60,000 trees and shrubs were planted as wind breaks, farm woodlots and wildlife food and cover, and for gully bank protection.” They also promoted contour farming, strip cropping, retention of stubble and fallow, and crop rotation.

From 1935-1939, more than 200 workers were housed at the complex on Mill Creek Road. The site was comprised of 20 buildings, including eight barracks, a mess hall, administration building, officers’ quarters, a library and classroom, an infirmary and other buildings.

The men came from all over the country. The first wave included a large contingent from New York City, and a number of subsequent participants came from the Midwest. Most of them had never seen the West.

The CCC “boys” worked hard, and were well-regarded in the community.

In February of 1936, a crew from the camp pitched in to remove mountains of snow in downtown Walla Walla and received kudos from the community and the Walla Walla Daily Bulletin. And when one of the enrollees had to rush home to Nebraska to be with a dying family member, the other men gave up part of their $5 pay to pay for his train fare home and back to the camp.

Some of the men who worked at the camp established ties with Walla Walla including well-known local physician Bob Jamison. Young Ed Goodall initially came to the Pomeroy CCC camp from Ohio, and later followed its commander, Lt. William Markham fof the 399th Infantry to Camp Walla Walla.

Goodall liked the area so much that he settled in Walla Walla after serving in World War II, and retired from a career at the VA Hospital in 1971. In a January 1988 interview with Vance Orchard of the Union-Bulletin, he recalled his service at the camp, including the discipline enforced by Lt. Markham.

After cementing the opening back in, they placed a brass plaque bearing the Company 1761 name over the repair. The plaque stated:

ARRIVED AT THIS CAMP

After their six-month stint, Fred returned home to Kansas, but Harold remained and married a Walla Walla woman, Clara Benzel.

In 1939, the camp on Mill Creek closed. In subsequent years, the buildings were razed and, in some cases, were moved from the site. Many of the buildings were made available to the Stubblefield Home and the Boy Scouts, who moved several buildings and used the materials from others to build lean-to shelters.

None of the buildings seem to have survived. However, it is possible that two cabins, now on the grounds of the Kirkman House, might have been moved from the CCC camp to be used as rental houses. The only remaining structures on the site of the camp are the original pillars built by the Osborn brothers at the entrance to the camp.

In 2018, Walla Walla 2020 erected an interpretive plaque commemorating the camp on one of the stone pillars which still stand on Mill Creek Road. An interpretive brochure is available on their website.

The CCC served an important role in providing gainful employment during the Depression, sustaining many young men and their families at a time of need, staving off starvation and homelessness, and allowing them to survive until better times.

The CCC’s legacy of parks, community structures, roads and agricultural practices played a significant role in the history of the country, as well as the Walla Walla Valley

For interviews with Harold and Fres Osborn visit justinmuseum.com