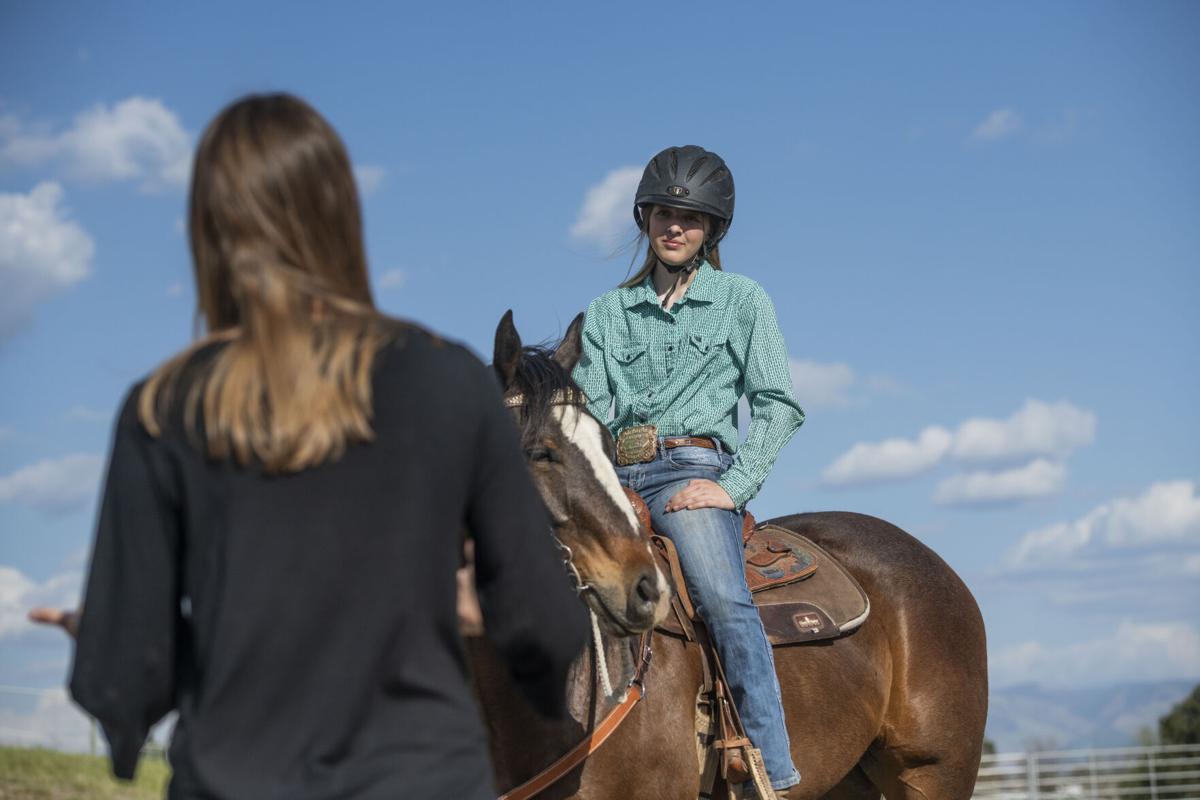 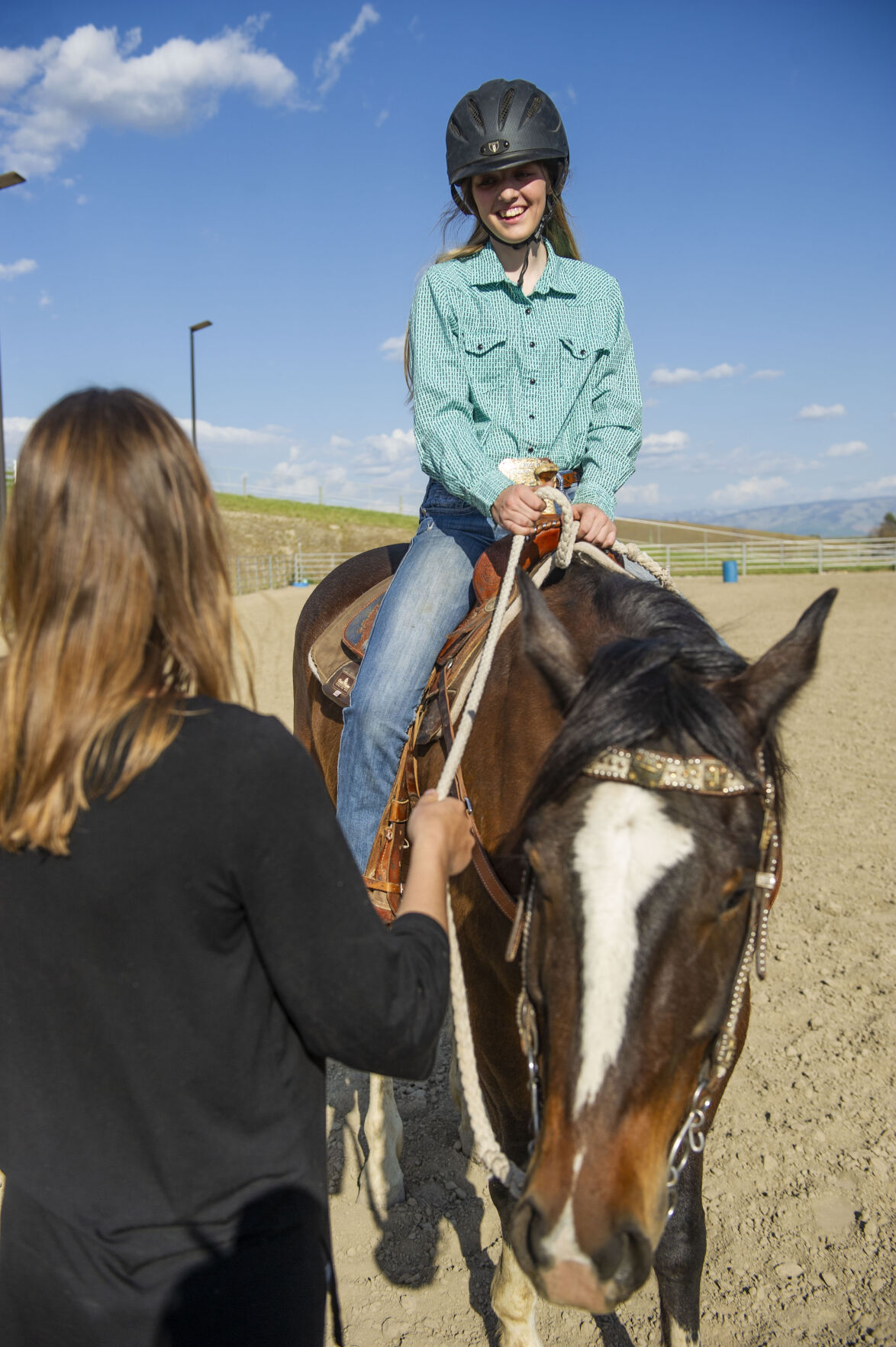 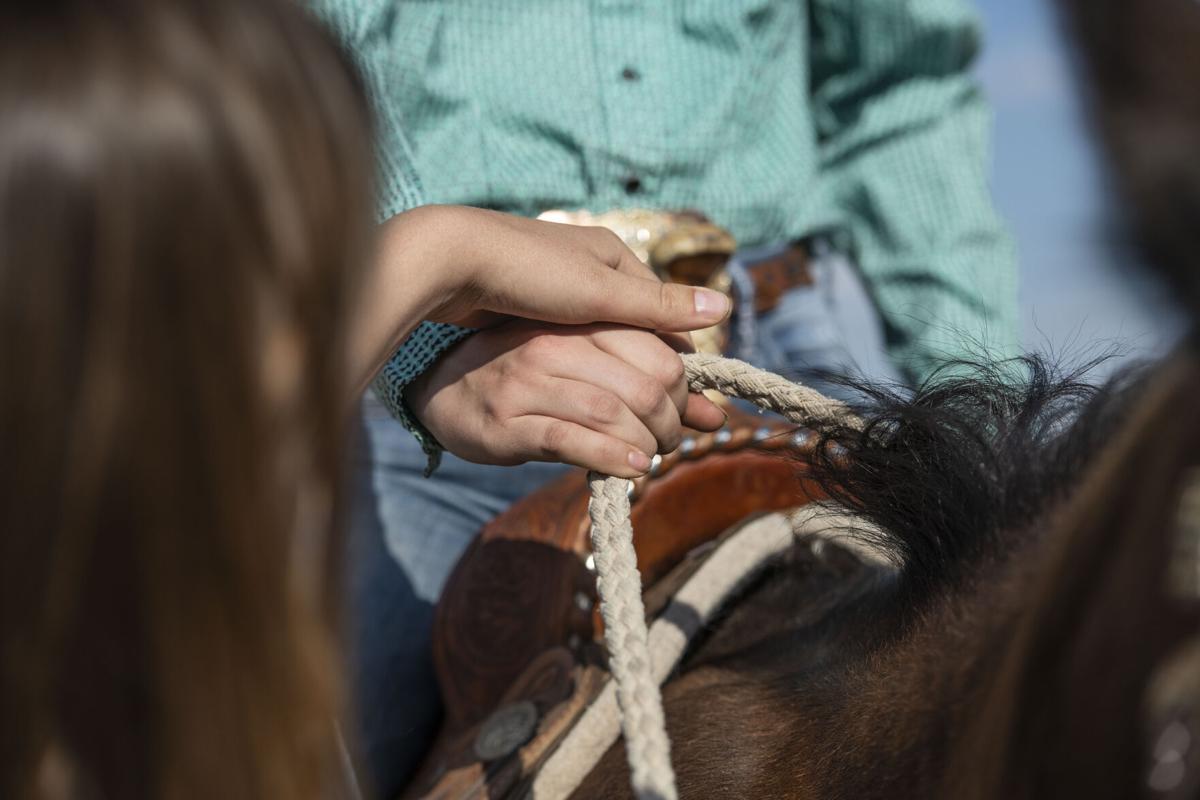 Kallstrom makes a subtle change in the grip on the reins of a student. 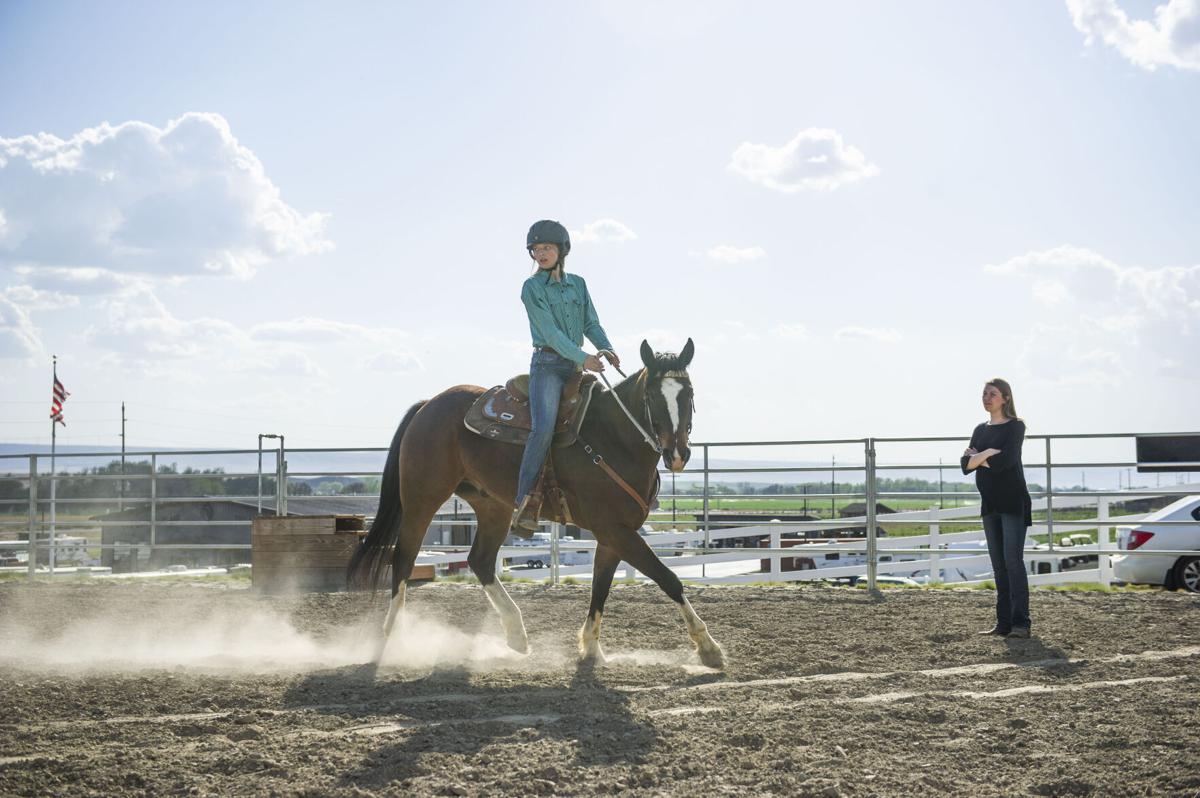 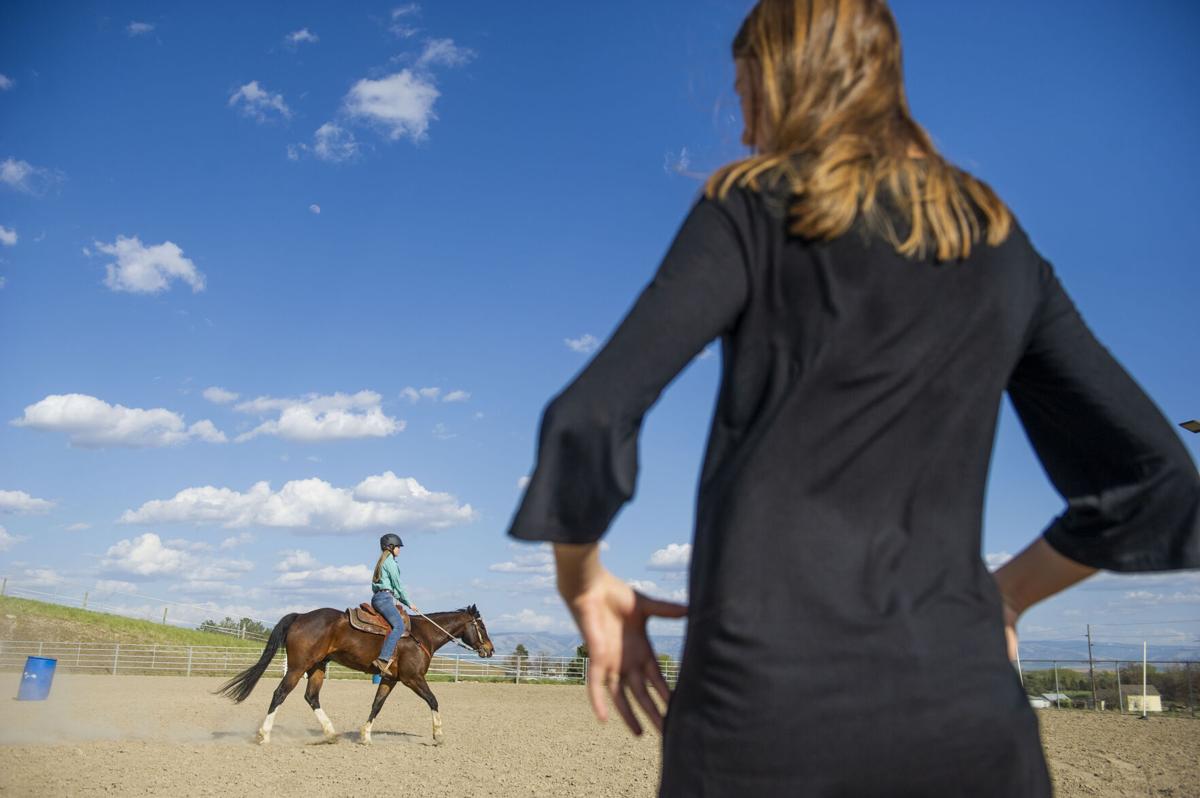 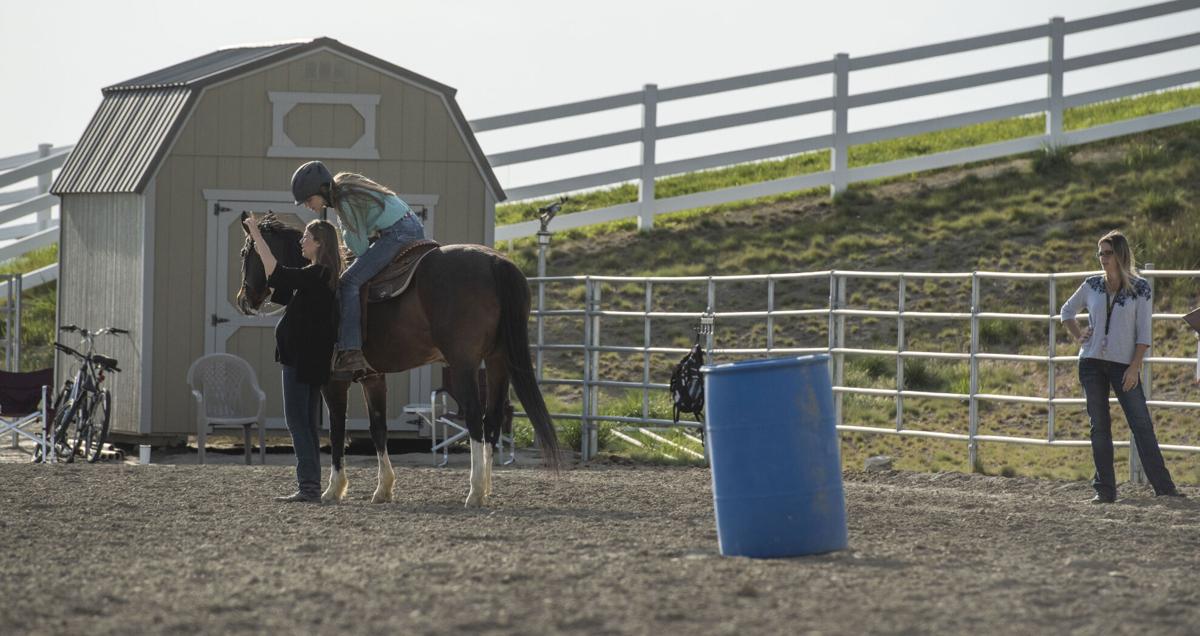 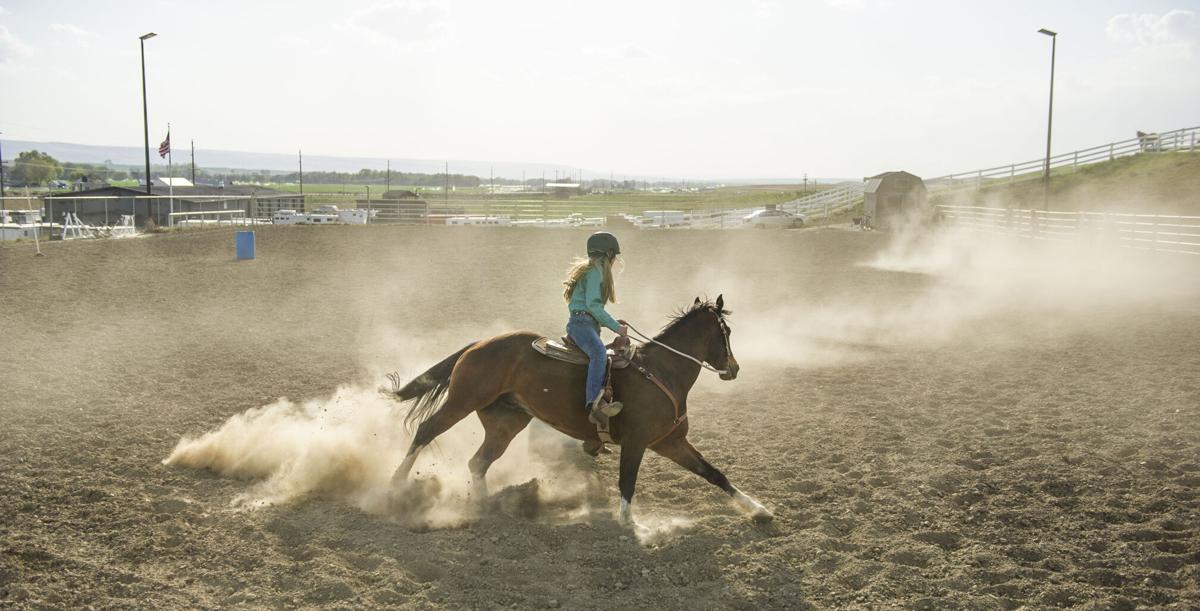 Madison Worden, 15, takes one of her full-speed barrel runs after doing several at a much slower pace. 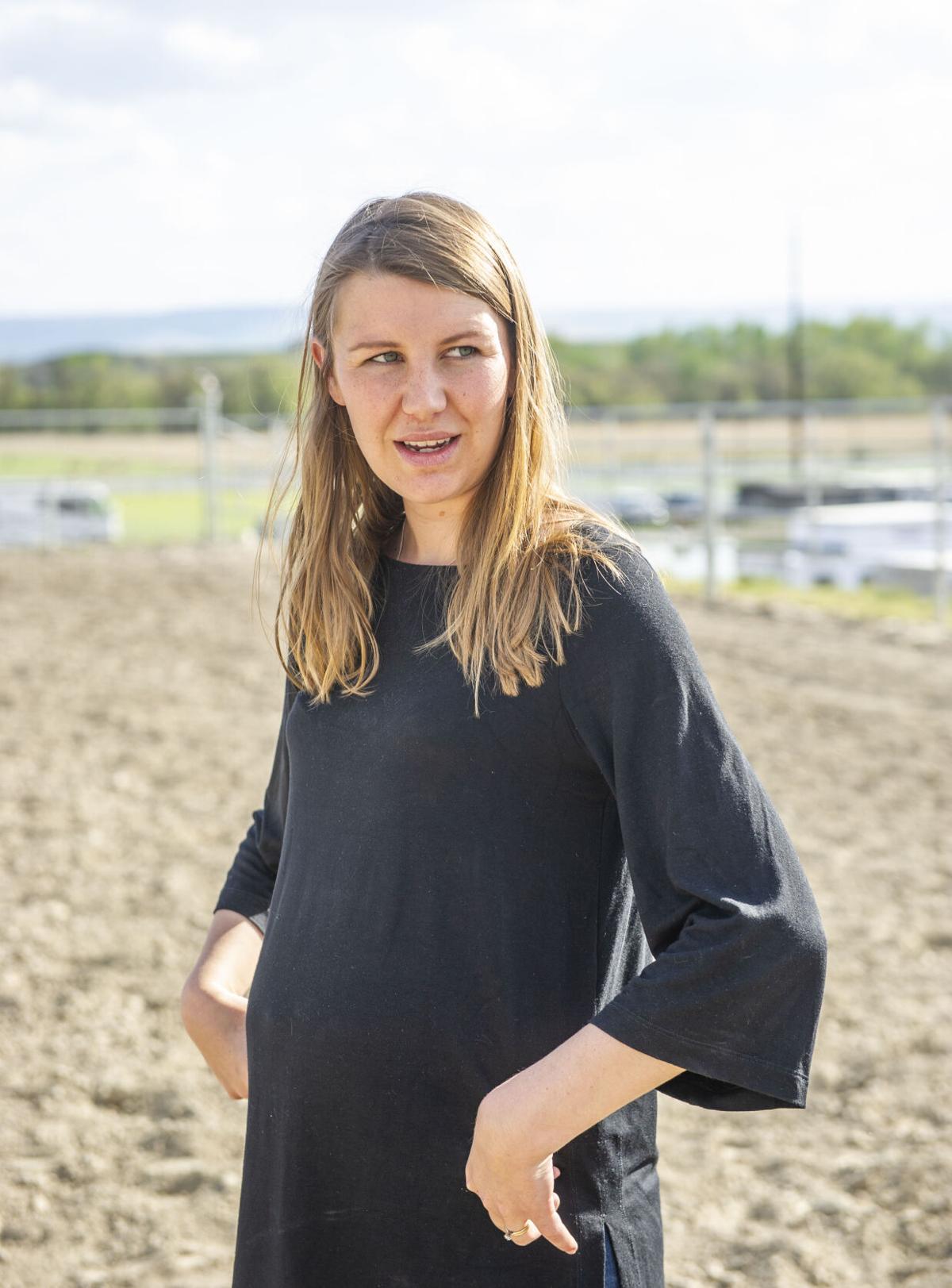 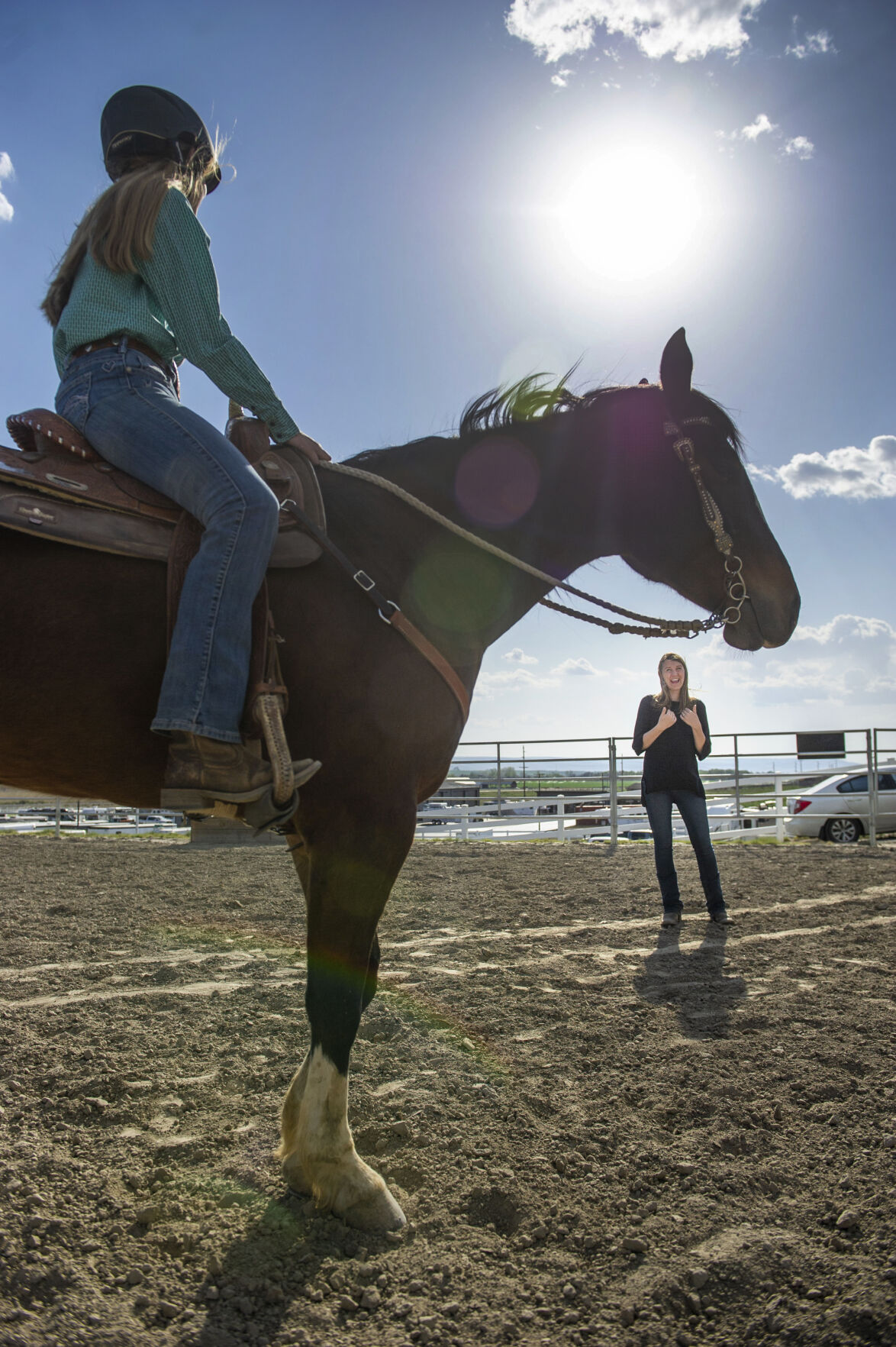 Nicole Kallstrom works with one of her students during a recent barrel racing training session at her Honor In Horses arena. 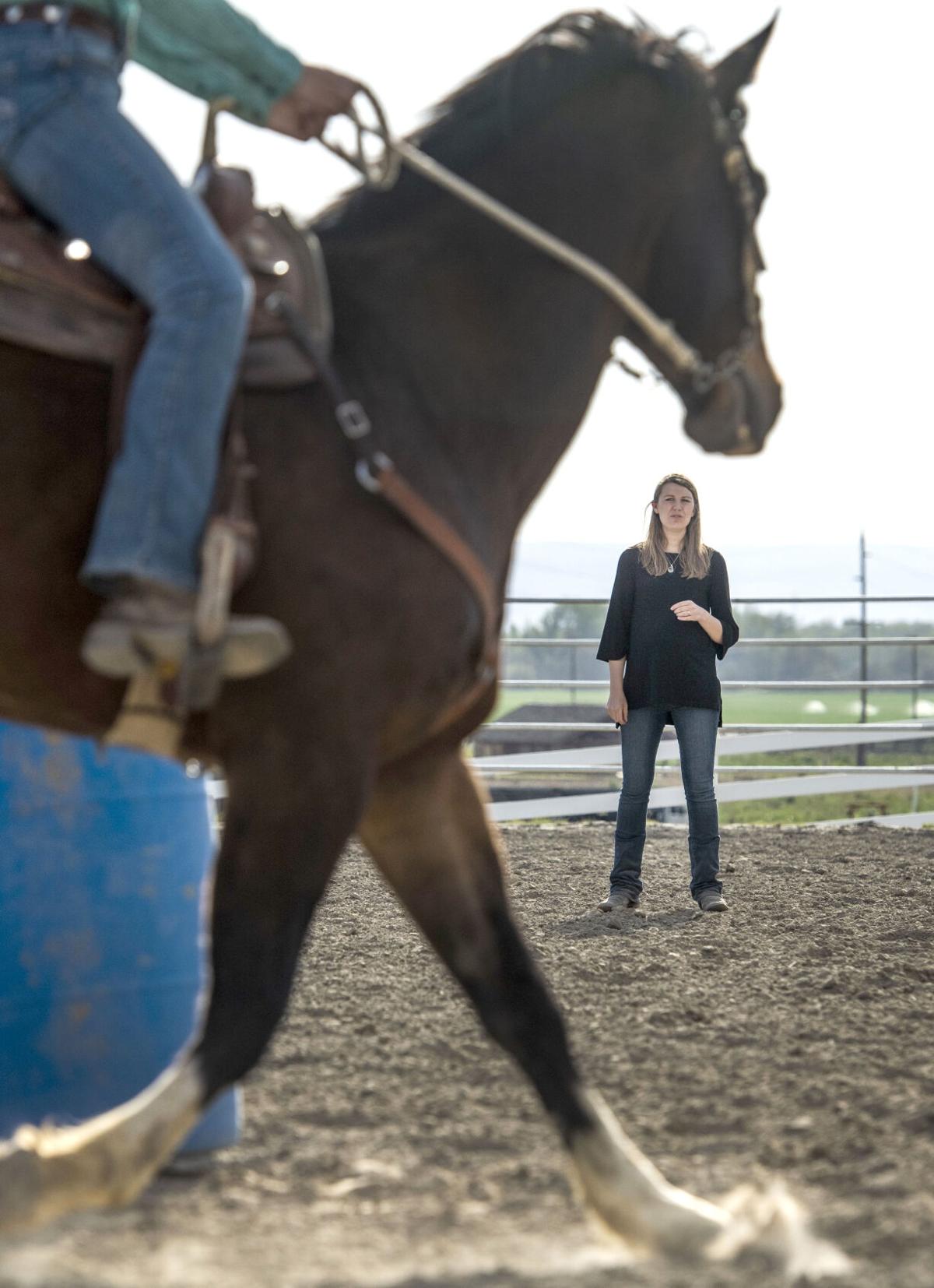 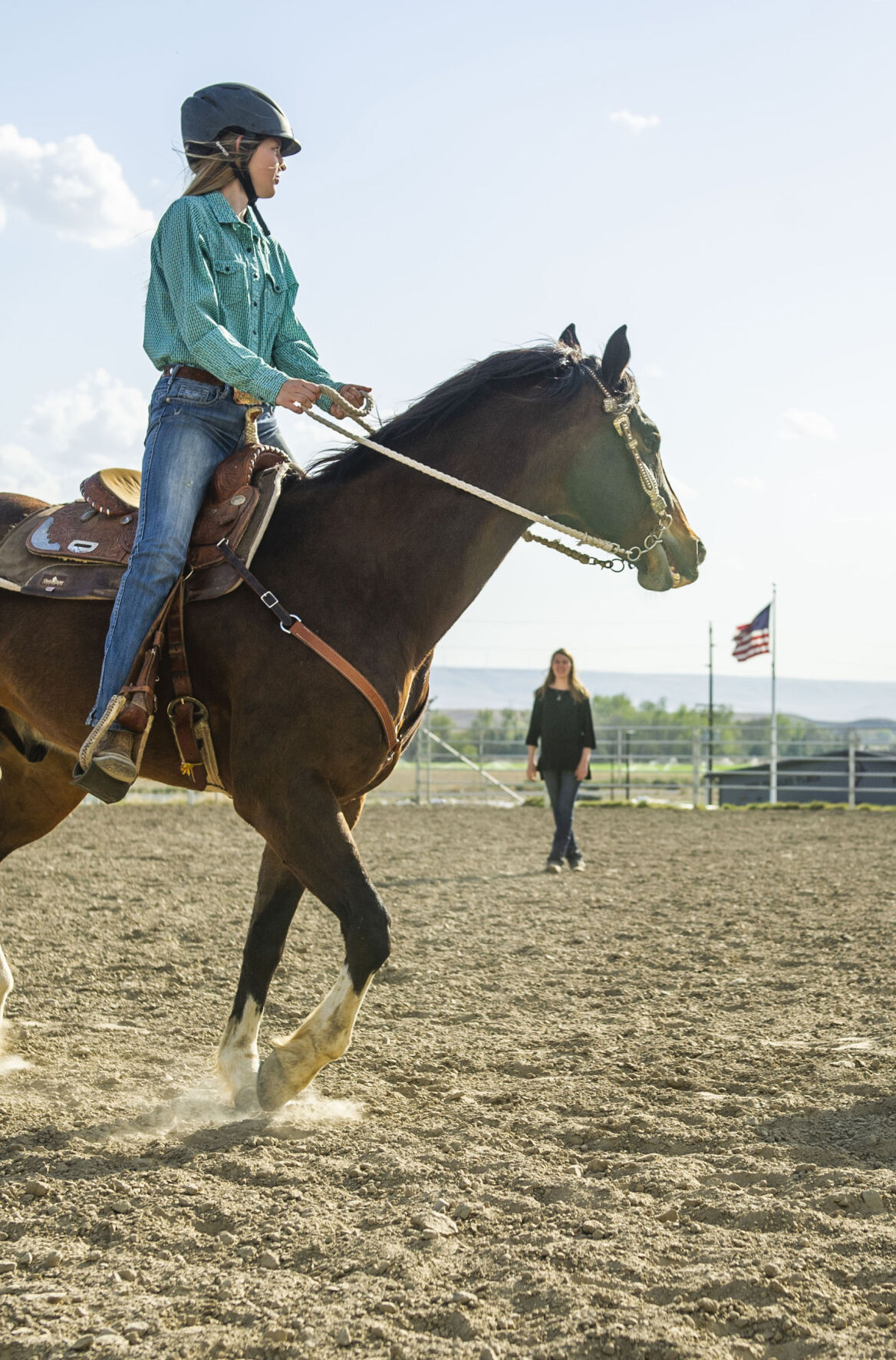 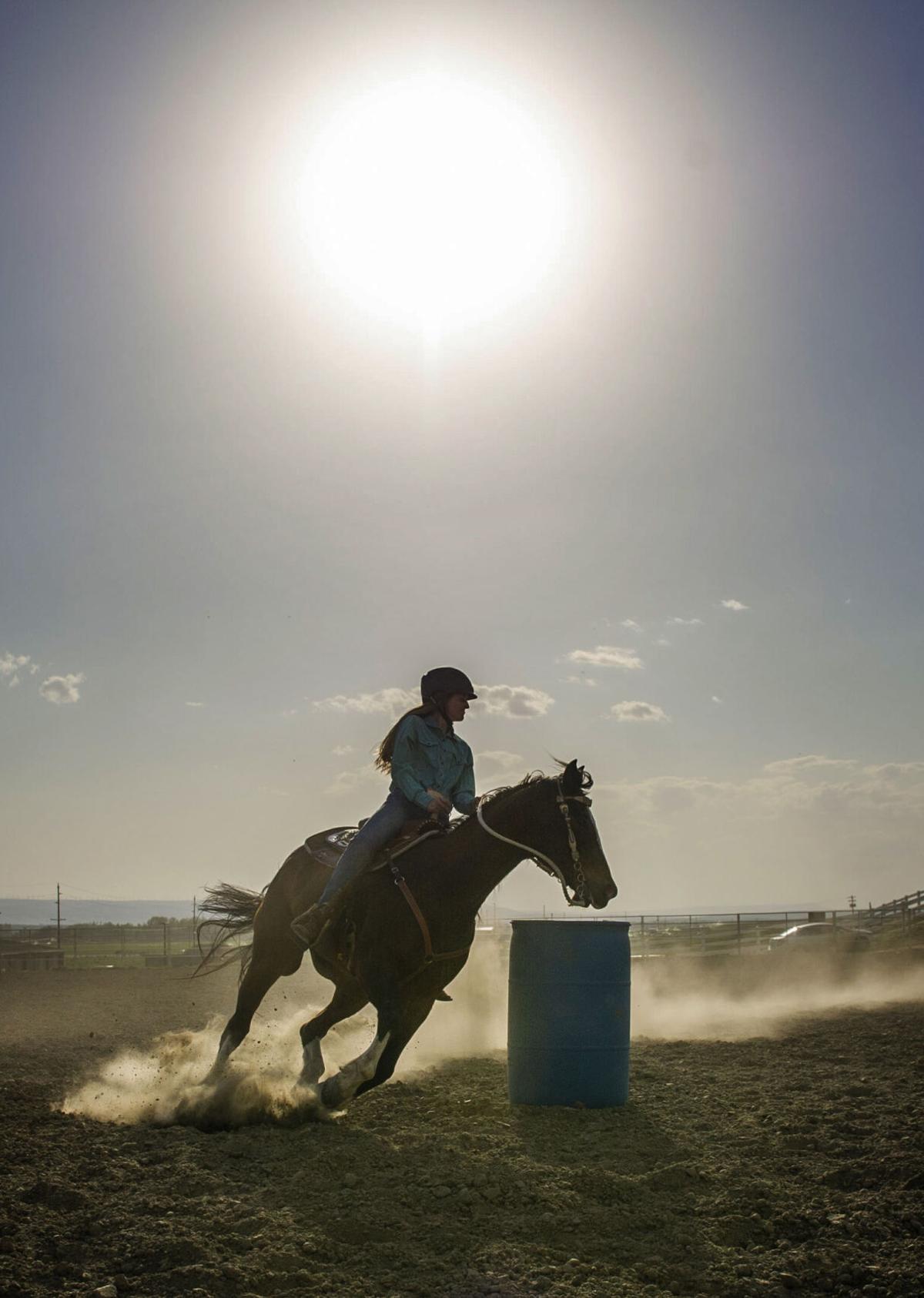 Completely in control, Madison Worden corners around the final barrel at the end of a training session with Kallstrom.

Kallstrom makes a subtle change in the grip on the reins of a student.

Madison Worden, 15, takes one of her full-speed barrel runs after doing several at a much slower pace.

Nicole Kallstrom works with one of her students during a recent barrel racing training session at her Honor In Horses arena.

Completely in control, Madison Worden corners around the final barrel at the end of a training session with Kallstrom.

Wheels are not Nicole Kallstrom’s first choice when it comes to traveling from Point A to Point B, but nonetheless, she says she can change a tire “faster than a man.” Her preferred modus operandi? Four hooves, four legs and the heart of a horse. And this consummate horsewoman herself has a heart with get-up-n’ go nerve.

Back when Nicole, then Aichle, was 19 and a new Wa-Hi graduate, she hitched up a horse trailer, loaded her mare Blondie, stashed tack, threw a truck into gear and rolled off with just her dog Kobe. From her home in Frenchtown, she headed south alone on the rodeo circuit — with her equestrian parents’ blessing, no less.

Nicole barrel-raced in competitions all the way down to Texas and then, for good measure, rumbled east to compete in Louisiana and Mississippi. “That’s why I’ve learned so much about life,” she says. “I’ve been able to be independent, for once you’re out there you didn’t have a choice.”

But prior to that adventure, in 2010 when she was just 17, Nicole competed at Kennewick’s TRAC Arena. Barrel races, for the uninitiated, involve horse and rider speeding over standard, measured distances, circling three barrels to complete a clover-leaf pattern until charging the finish line. Time is what counts.

The qualifiers that day, including Nicole, lined up for the winning dash in the Top 20 round of the BRN4D, (Barrel Racers National 4D) finals. But Nicole froze, suddenly full of self-doubt and worried about further stress on Blondie. She wanted out.

Then, she recalls, she had a sudden spiritual connection, a prod, and, thus inspired, she rode to the starting line, the very last rider. Racing to the Beach Boys’ “Surfin’ USA” blasting in the arena, the pair of Nicole and the 8-year-old Palomino quarter horse, blazed through the pattern. Tightly but lightly bonded to each other, she and her mare swept the women’s world record at 16.64 seconds. She won a new saddle and $1,000, but the big dazzle was the acclaim and fame across the national women’s barrel racing culture and in the media.

Since those days, she married Uriah Kallstrom in 2019 and started a riding school, Honor in Horses, in an open arena off the old Highway 12 next to her grandfather Don Johnson’s trailer business. Whatever the students, ages 5 to 40 so far, wish to achieve, availability to Nicole’s views add to outdoor lifestyle pursuits in the Walla Walla Valley.

Normally, if a rider doesn’t have a personal horse, Nicole shares her horses, matching needs and personalities for an appropriate “victory,” as she says, no matter how small. She tutors ongoing clients and adds drop-ins or tourists for private lessons, if they have their own horses and make appointments. Honorinhorses.com

Nicole, now 28, is presently on hiatus while awaiting their first child in June. With husband Uriah, she says, “we know our life is going to change. Yet even with that kind of looming, I can definitely see myself still giving lessons to riders who have horses. I want to open it up to the huge need in the Valley. With people, their horses can teach them such wonderful life lessons, patience and understanding. They get more than the riding but that takes time.”

The accomplished horsewoman, now businesswoman, too, made time to talk with Lifestyles:

LS: When you were 17 and still a high school student, how did breaking the world record in women’s barrel racing affect you?

Nicole: Just having a title is way more impressive to people, even though people may have the same skills. But having a title really helps. It opened up the door to a lot of opportunities. For example, in 2020, Uriah and I went to Gloucester, England, so I could teach technique at an international horseback riding forum.

LS: What is it in your character that led you to jump into such dramatically different horseback riding styles — from youthful trick riding to the speed and maneuvering of barrel racing, to the paired presence of Western dressage? And now, mounting a riding school?

Nicole: Generally speaking, it never occurs to me that I can’t do something. It isn’t a big-headed thing. I love my horses and really just believe in them. I think it’s my strongest point, and my parents have believed I could do things. It all replicates with the horse, that confidence and believing in them.

LS: A mature riding horse typically weighs 800 pounds or more. It can be rowdy ─ delivering twists, hops, kicks, bucks and sideways jump-spooking, among other surprises. Even a trained horse can act out its opinions, contrary to the rider’s expectations. What has given you courage and confidence to ride?

Nicole: I was born into horses. My dad got into it when he was a teenager, he’s a natural horseman who really took to it. And he’s also successful in that he could pick out the good horse, one not only with a talent in racing, but a good horse you want to be around. My mother rides horses, too. My father was kind of a coach-helper.

I started when I was age 2 to 3. By age 9, I was finding my stride and was into barrels, while my sister was into 4-H, which is important for horsemanship. As I grew up my main mount was Artie, an Arabian that belonged to Judy Andrews. The horse was a great babysitter. Then I got serious at age 13, for barrel racing always had my attention. When I got Butterball, she was just a dream horse, so honest, extremely smart.

I began teaching riding clinics around 18 and also giving private lessons. I’m able to break things down to the foundations.

One reason I’ve called my riding school Honor in Horses is my respect for horses. The name connected with me. I was praying for a representation to use for the sake of the honorable position that is everything I want to do with riders. And it’s more enjoyable for the horses. You have to be humble.

But I am also an analytical thinker and good at solving problems. Teaching opens the door for that. When we put humans into the mix, we have two moving parts to challenge your horse’s personality, attitude and knowledge base.

LS: What happens when a horse is overriding its rider’s plans?

Nicole: Well, I have all mares. And they definitely have an opinion about things. But horses aren’t trying to be disobedient; clear communication is what’s missing. They love to be one with their rider because it’s athletic and supple when riders don’t have horses working against them. Failure can result in an act of disobedience, it’s a failure of recognition.

When I shattered my wrist — at 11 weeks pregnant — it was with a good but pent-up horse spooking and going two ways. Let’s just say Rosie gave me an opportunity to dismount and I couldn’t refuse. It took 10 pins and local anesthetic to set the wrist.

LS: What is dressage (dress-ahj)?

Nicole: It’s subtle cues between a horse and rider, a philosophy. You begin with no reins, bareback, to begin the asking of the horse. You tell them the pattern; this is how you move this way when we go out. As the rider gets stronger yet softer (losing tension, maintaining a posture that reflects the horse’s physicality), the horse understands. Key is a posture of rider arms and elbows over hips, balanced. Developing the rider’s strong core, we get the athletic power of ballet. Really, it is amazing how horses’ bodies mimic our bodies. I now train everybody this way including barrel-racers.

LS: There are many moving parts to your profession. What’s most difficult for you?

Nicole: I try to be fair and consistent, though perfectionism and moods sometimes make me forget to compliment my riders enough, I admit.

LS: What’s the carrot for you, the best aspect of Honor in Horses?

Nicole: I work overall to treat students like I treat my horses, to look to celebrate the little, small victories. And to teach that in the end, every rider should ask themselves, what would my horse say about me if it could?