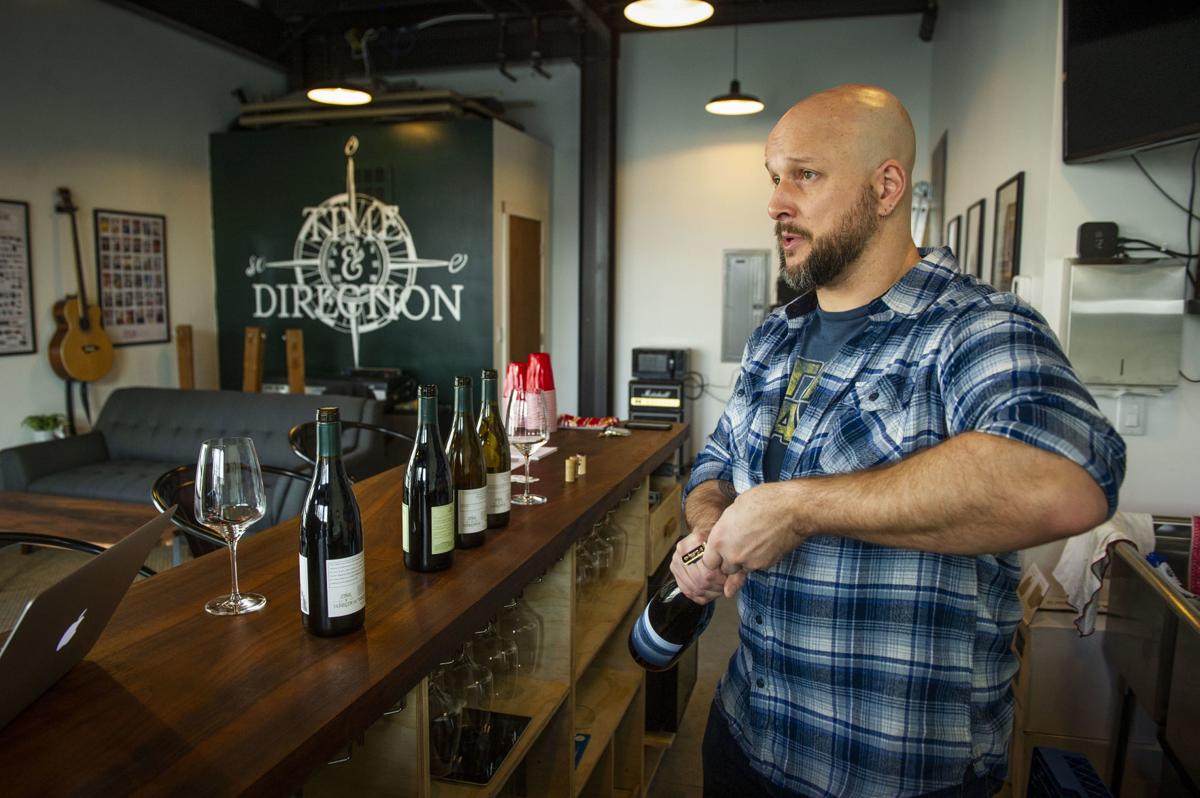 Top: Steve Wells, who bills himself as Director of Awesome at Time & Direction, readies for a recent tasting his new downtown tasting room.

Top: Steve Wells, who bills himself as Director of Awesome at Time & Direction, readies for a recent tasting his new downtown tasting room.

Walk through the doors of Time & Direction, a new tasting room at 4 N. Spokane Street in Walla Walla, and whether you know it or not, you’ve passed through the looking glass into a unique, fragmented and fascinating world where wine is like those magic pills that Alice swallowed that open up new doors of perception.

Owner/winemaker Steve Wells is the white rabbit who leads you down this passageway. A friendly, engaging man, his business card reads “Director of Awesome.”

Wells’ answers to even the simplest questions take you to unexpected places that illuminate the person as much as the wines.

I began with the basics: What’s the meaning of the name and logo?

“When I was trying to decide on a name for the winery, coming up with something original is difficult” says Wells. “I didn’t want to use my name; it had to be easy to pronounce, look good on a restaurant wine list, and mean something.

“I wanted to avoid standard terms like ‘cellars.’ So one day, I was looking at my forearm tattoos and I thought ‘what’s the easiest way to describe this? Time and Direction!’”

New rabbit hole: the hidden meanings of the tattoos, both designed by Wells.

On the right forearm is a pocket watch showing the time his daughter was born. On the left forearm is a sort of compass, only instead of directions marks are initials representing his family, along with their astrological symbols. Hence, time and direction, which he notes are “two components essential to any journey in life.”

His own journey already has enough twists and turns for several lives.

He grew up in Milwaukee and Fargo, N.D., studied nutrition at the University of Wisconsin, moved to New York to “become a rock star” and did what all struggling artists do — waited tables.

“I was a beer guy at the time” he admits, with no interest in wine. In fact, he remembers being invited to a staff wine tasting and after listening to all the implausible descriptors flying around the room decided he had no use for wine.

But that quickly changed once he realized that better knowledge would lead to selling more expensive wine and better tips. He set about learning how to do just that.

“Once I get into something I’m a quick study” he admits. His employer sent him to an intense three-day wine seminar. As fate would have it, the class was taught by Greg Harrington, a master sommelier who shortly thereafter moved to Walla Walla and founded Gramercy Cellars.

Wells went from waiting tables into restaurant management; continued his wine education; was introduced to the Court of Master Sommeliers, and was certified in near-record time.

When the Washington Wine Commission sponsored the first of their “Road Trip” excursions for the trade in 2008, Wells was invited along. He recalls one perfect late summer evening, standing in the Boushey vineyard, drinking a Grenache blanc wine while chewing on just-picked grapes from the site and chatting with Dick Boushey himself. It was the ‘aha’ moment when the winemaking bug was planted.

Back in New York, he met with Ron Coleman of Tamarack Cellars, who told him about the new two-year winemaking program at Walla Walla Community College.

More tastings of Washington wines convinced Wells that his future was here. As he writes on his website, “what’s the big deal in moving 3,000 miles away to pursue your dream? You just have to convince your wife to leave everything on the East Coast behind and that moving with three small children will be a piece of cake, without a job or place to live. That’s exactly what I did in the spring of 2011.”

Shortly after completing the two-year program at the community college, the last piece of the puzzle fell into place and the first Time & Direction wines were made.

The business opened its doors this past July.

The focus for now is on Rhône varietal wines. Production is limited and the wines quickly sell out.

The modest tasting room is as much man cave as wine cellar, with acoustic guitars and amplifiers, examples of Wells’ design work, and a disco globe scattering lights across the ceiling.

Tasting through the current releases, the discussion turns to unraveling the hidden meaning of each wine’s name and label design.

The 2018 ‘Fretboard’ Viognier features a tight rendering of a bass guitar fretboard; while the UpUpDownDownLeftRightLeftRightBASelectStart 2018 rosé of Grenache references a video game cheat code — an homage to his “nerd-dom.”

There’s much more (be sure to ask about the Diamond Cutter Red) which I’ll leave for you to explore.

Suffice it to say that all these well-crafted, single-vineyard wines share an emphasis on elegance, vivid acids and varietal specificity.

You can find the winery online at timeanddirectionwines.com and the tasting room is open Fridays and Saturdays 11 a.m.-7 p.m.