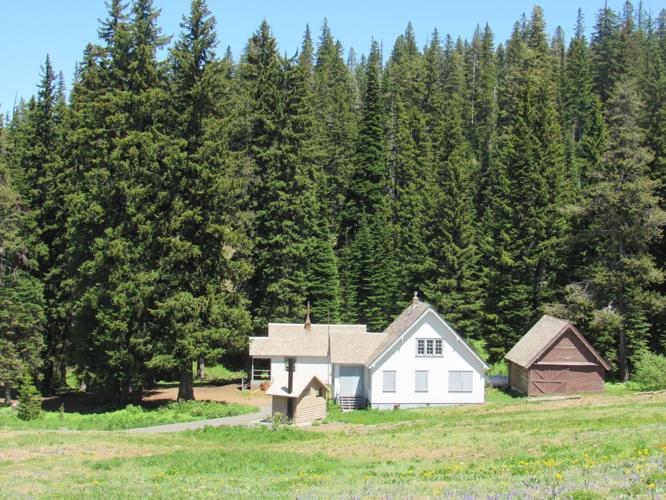 The Godman Guard Station was built in the 1930s and is across the road from a historic Civilian Conservation Corps campground. 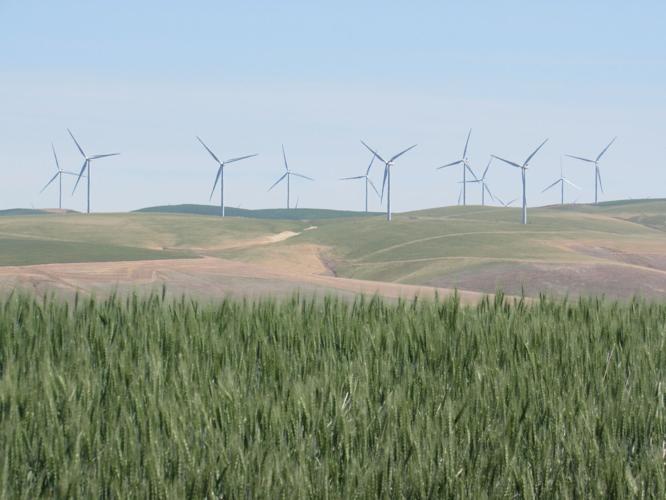 Not far from Dayton, the only forest near Skyline Road is wind towers. 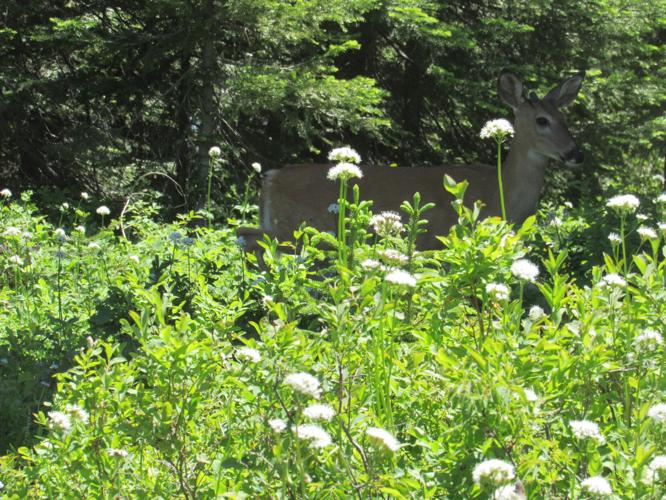 A white-tailed buck beats the heat. 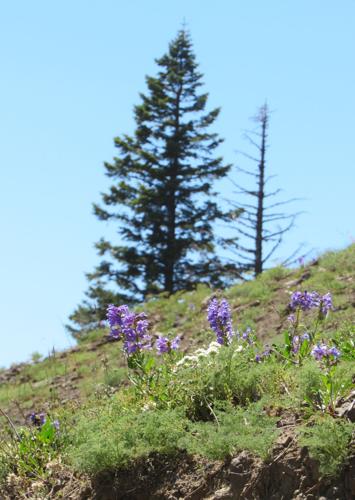 Blossoming flowers provide splashes of color along the roadside. 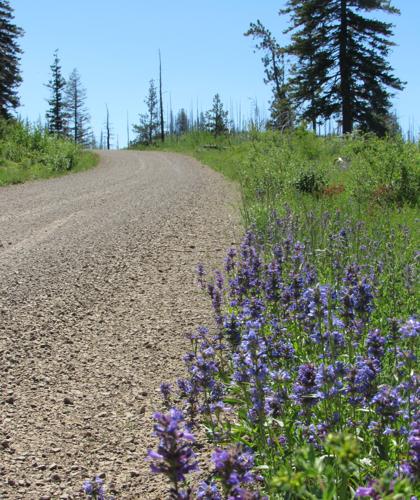 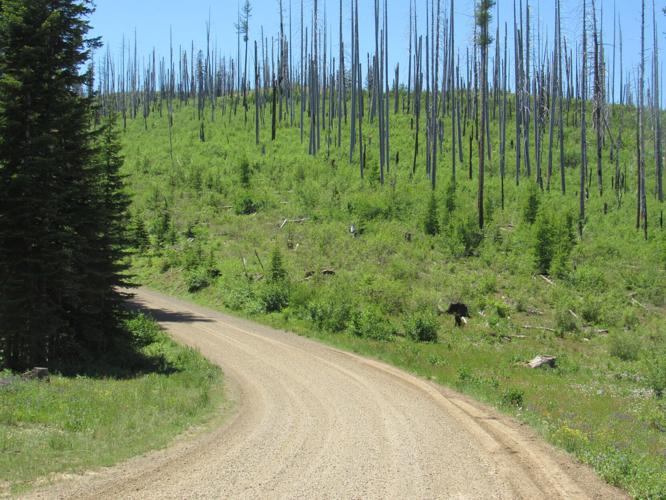 Remnants of a massive forest fire that swept through the area stand guard along Forest Road 46. 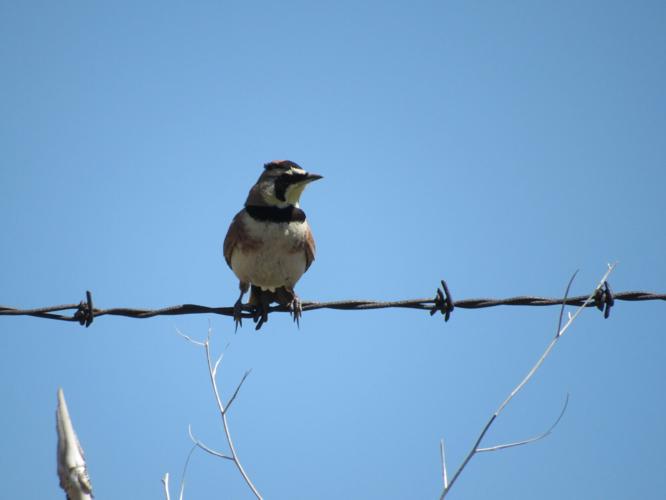 A horned lark takes a break from collecting insects and seeds. 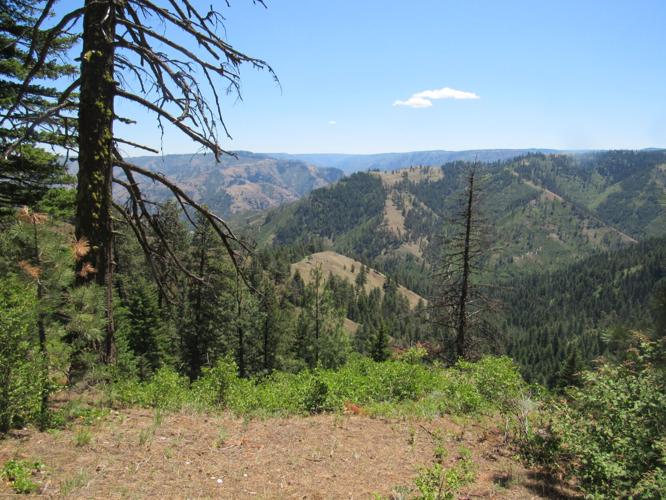 Scenic vistas abound along Skyline Road, including this look into the Tucannon River drainage.

Editor’s note: This is not a casual drive and involves roads that can be rock-strewn, ruddy and primitive. This drive should not be attempted between late September and June because of snow and mud on the mountain roads. Check the Columbia County website for road closures in the fall, winter and spring.

The Walla Walla Valley is a bake oven. Day after day, temperatures soar. It’s 90 degrees, and despite sky-high gas prices, I hit the road to seek relief.

My “Beat the Heat” tour launches from Dayton.

The goal? To reach Godman Guard Station, 28 miles south of Dayton, via Skyline Road, loop around Bluewood ski area and return to town.

From Dayton, I climb Mustard Hollow on Eckler Mountain Road through farm country.

At the “pavement ends” sign, I have gained enough elevation that temperatures cool to the low 80s. The only forest — wind towers far to the northeast — collects energy from the summer breeze.

I pass Thorn Lookout and Pioneer Memorial Park. Traffic is scarce, except for a “Love is our Strength” hippy bus.

On roadside barbed wire, a horned lark rests from a busy morning collecting seeds and insects.

Soon I take a deep dive into the forest. Temperatures dip into the upper 70s. Ferns unfurl. Swallowtail butterflies flit between flowers swaying in the breeze.

Presently I reach Kendall Monument. From there, a steep road descends east into the Tucannon River Valley. I head south and enter the Umatilla National Forest on Forest Road 46.

The road follows a narrow ridge. Around each corner, vistas unfold of deep canyons that resemble bottomless pits.

I pass Midway and Patrick springs, where a white-tailed buck, antlers in velvet, grazes on “deer salad.”

The road climbs. After passing massive wildfire burns dotted with snags, I reach the ridgetop Godman Guard Station. I stop and stretch my legs.

Built in the 1930s, the station, which can be rented for the night, sits just outside the 177,400-acre Wenaha-Tucannon Wilderness and beside a historic Civilian Conservation Corps campground.

I continue west. Winding through the forest on road 46 as it circles behind Bluewood, I at last reach Forest Road 64 after many miles of solitude to sooth jangled nerves. Around each corner, scenic vistas unfold. Deep canyons yawn. Timber troops climb steep slopes.

When I stop the car for a break, the only sound is wind playing in the tree tops.

Even here, at altitude, it’s hot. The sun is piercing. Wildlife naps through the intense afternoon heat.

Finally reaching Forest Road 64, I make a bumpy, twisty descent to the base of the ski area. The temperature has risen back to the low 80s. I turn up the car’s air conditioning and connect to the paved North Touchet Road following the North Fork of the Touchet River to the blast furnace that is Dayton.

Reach the author at jeffp557@gmail.com.

How has Walla Walla celebrated Fourth of July over its long history?