Top: A young cyclist makes his way past the Lincoln Creek pond in Pioneer Park. The spring-fed creek is fed from a source beneath the park. Above: Stone Creek flows through a private residence with serene landscaping. Photos by Greg Lehman.

A fragment of Lincoln Creek in a yard near Pioneer Park before it goes underground for a few blocks. Photo by Kate Frey. 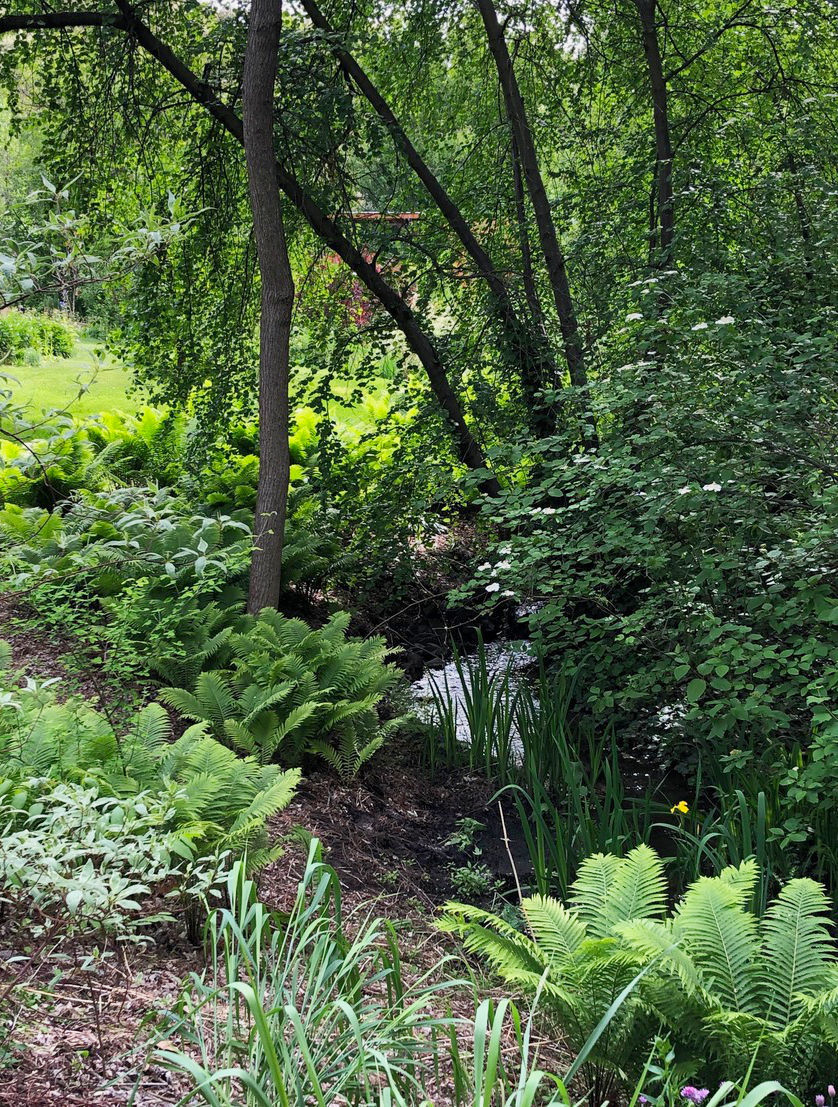 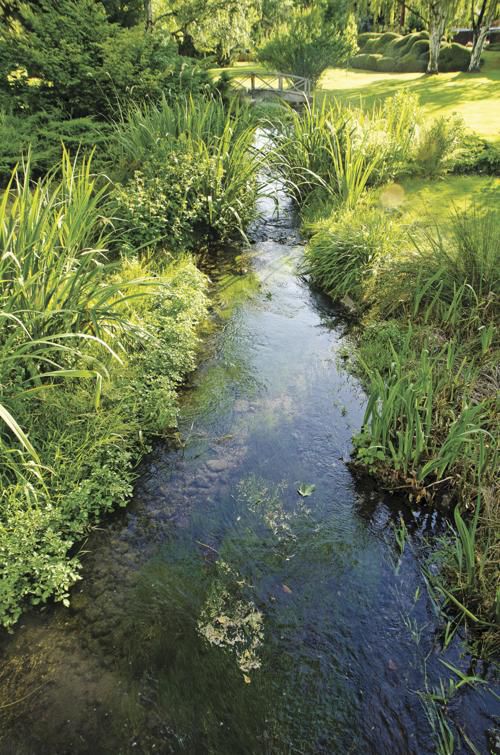 Top: A young cyclist makes his way past the Lincoln Creek pond in Pioneer Park. The spring-fed creek is fed from a source beneath the park. Above: Stone Creek flows through a private residence with serene landscaping. Photos by Greg Lehman.

A fragment of Lincoln Creek in a yard near Pioneer Park before it goes underground for a few blocks. Photo by Kate Frey.

Creeks are everywhere in the city of Walla Walla. Rushing and sparkling in the sun or snow, water is ever-present in many areas of the city.

In winter and summer, the burbling waters announce their presence almost anywhere you go and flow incessantly through parks, front yards, back yards, under streets and finally into Mill Creek or the Walla Walla River.

In a semi-arid climate such as Eastern Washington, with little summer rainfall and consistently warm seasonal temperatures, steadily flowing year-round creeks really stand out in the summer-dry landscape and are of real benefit to the more seasonal flows of Mill Creek and the Walla Walla River and dependent fish and wildlife.

The city limits of Walla Walla boast 15 spring-fed creeks. The water comes from melting snow, precipitation in the Blue Mountains and percolation from the shallow gravel aquifer.

Some originate in the vicinity of the north end of the city near U.S. Highway 12, and also Wildwood Park, Whitman College and Pioneer Park. A house on Brookside Drive just upstream of Lakum Dukum duck pond on the Whitman College campus is the origin of College Creek, and both Lincoln and Bryant creeks begin in Pioneer Park.

In the Walla Walla Valley Basin, including to the south in the Milton-Freewater area, there are 50 spring-fed creeks in the so-called Spring Branch System. Three creeks, Mill, Garrison and Yellow Hawk — as evidenced by recent flooding in February of this year — receive most of their water from snowmelt and rainfall — ground-water to a lesser extent. Garrison and Yellowhawk creeks begin at a diversion point on Mill Creek, which is regulated by the U.S. Army Corps of Engineers Walla Walla District. The diversion dam area is part of the larger Mill Creek Project, which helps regulate water flow through the city’s canal system.

The cities of Walla Walla and Milton-Freewater sit on top of wide, spreading alluvial gravel and sediment fans originating from erosion of rock in the Blue Mountains and brought down to the Valley by the action of creek and river water.

The springs in Walla Walla and around Milton-Freewater appear to emerge from nowhere — a spontaneous gift from the ground — but are actually the result of water in specific zones of the permeable gravel aquifer percolating up through gravel along the two alluvial fans.

The Walla Walla Valley Basin has both a deep, basalt aquifer and a shallow, gravel alluvial aquifer.

The deep aquifer — about 800-1,400 feet deep — aquifer is contained in the basalt bedrock layer and holds water about 18,500 years old. Originating from snowmelt and rain in the Blues, this ground-water very slowly travels the relatively short distance into the deep basalt aquifer of the valley basin.

Between the two aquifers is impervious clay. A shallow, unconfined gravel aquifer from rock eroded to gravel and brought down from the Blue Mountains sits on top of the clay layer, and holds water that is thought to be between 50 and 3,000 years old. This aquifer is recharged from snowmelt and precipitation and is the source of the base flow of many springs in the basin.

Creeks in the city

Originally, many creek paths — both spring-fed and non-spring-fed ones like Mill Creek — changed over time and meandered through the Valley.

As sediments built up, or during high flows of rain and melted snow, the water would spread out and find new paths.

Vegetation along them was likely lush, with wooded swamps and a mixture of grasses, shrubs and trees. Some examples of this type of vegetative cover can still be seen within the City limits in the area of East Chestnut, South Division and Bryant streets. The dense vegetation is highly beneficial to fish and other wildlife, providing insects and vegetation for food, habitat and cover, and shade to cool creek waters.

Now, most spring-fed creeks are channelized and moved partially underground in culverts. Some flow under houses, or streets, and some do so for many blocks. Lincoln Creek is underground along Poplar Street between Second and 12th avenues.

“Undergrounding” creeks in culverts speeds up waters and largely eliminates the potential to support wildlife and fish, or keep waters clear of pollutants encountered during passage through the city.

Open creeks interact with the soil and plant roots, effectively cleansing water by removing pollutants. They also support aquatic insects that feed fish further downstream, as well as provide water and food for birds and other wildlife. On open creeks, vegetated or partially vegetated banks help keep waters cool, while concrete and uninterrupted rock banks cause waters to heat up.

The cold, clear waters of spring-fed creeks provide a lot of benefit to Mill Creek and the Walla Walla River in summer by replenishing their base flows and providing a steady influx of cool, nutrient-rich water for bull trout, salmon, steelhead and other and aquatic species.

Historic uses of the spring-fed creeks in Walla Walla

The early water system for the city of Walla Walla was privately owned by the Walla Walla Water Co., established in 1881 by Joshua C. Isaacs.

Isaacs bought a number of parcels of land that included the land and springs Pioneer Park is now on. He leased the parcels in the Pioneer Park area to the water company for $100,000. The water system based at Pioneer Park was composed of spring-fed reservoirs that produced 4.5 million gallons of water per day for city use.

In 1899, the city bought the company for $250,000. By 1904, the city was having “water famines.” Lawn watering and letting pipes run in winter to prevent them from freezing was no longer possible, nor hooking up additional residences and businesses.

The city had established water rights to Mill Creek in 1866. A 1906 article in an area magazine called Up-To-The-Times describes a new gravity-transmission water system being developed 16 miles from the city up Mill Creek at Klicker Springs with the intake on the Swartz property, which is now Kooskooskie.

The intake was composed of a buried 20-inch wooden water line that would bring 12 millions gallons of water a day to the city at 100 lbs of pressure and was described as a, “sinuous wooden serpent, 16 miles long.”

It was estimated the new system would supply enough water for a city of 60,000 people. Today, the population of 30,000 uses about six to 12 million gallons a day.

In 1901, the old Walla Walla Water Co. land, springs and reservoirs were approved as a city park and opened in 1908 as Pioneer Park.

Today, people walking through Pioneer Park and some of the older parts of the city can see some of the creeks that are visible. They are often treated as beautiful water features for local properties and add to the unique character of the city.