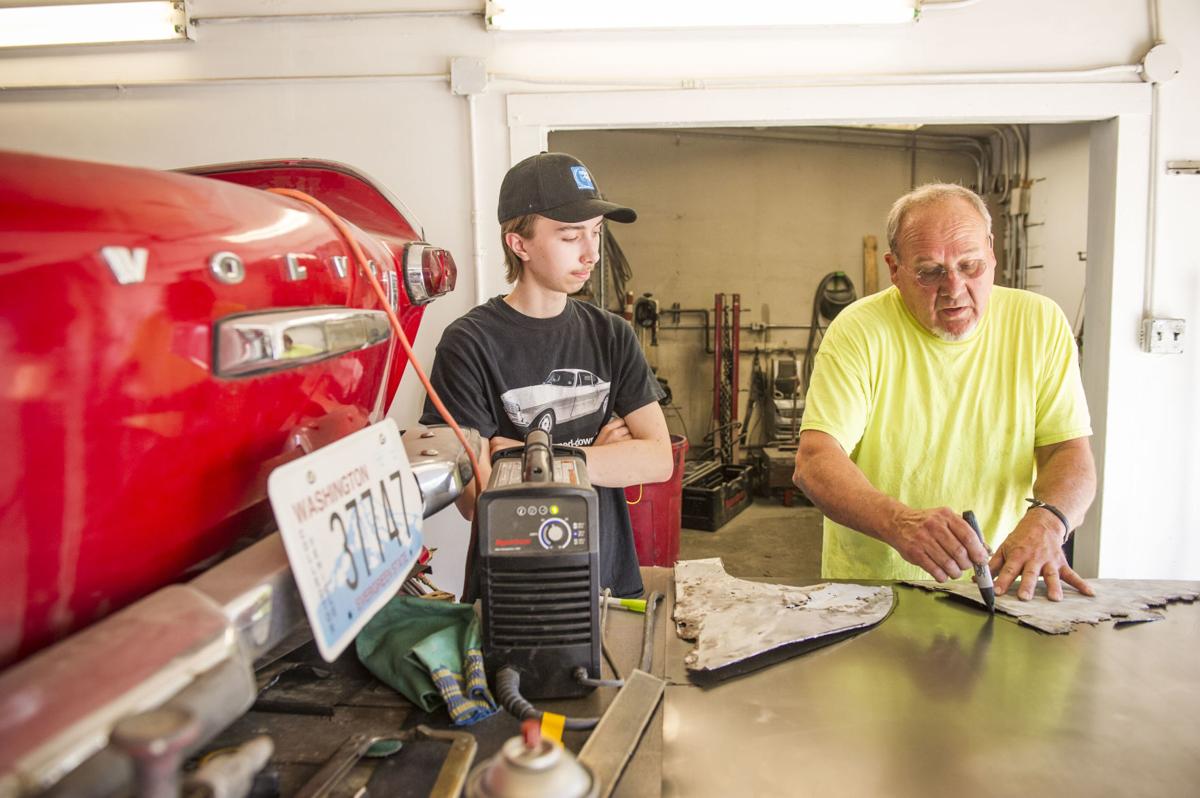 Drew Morgan looks on as work is being done on his Volvo by Jim Johnson. 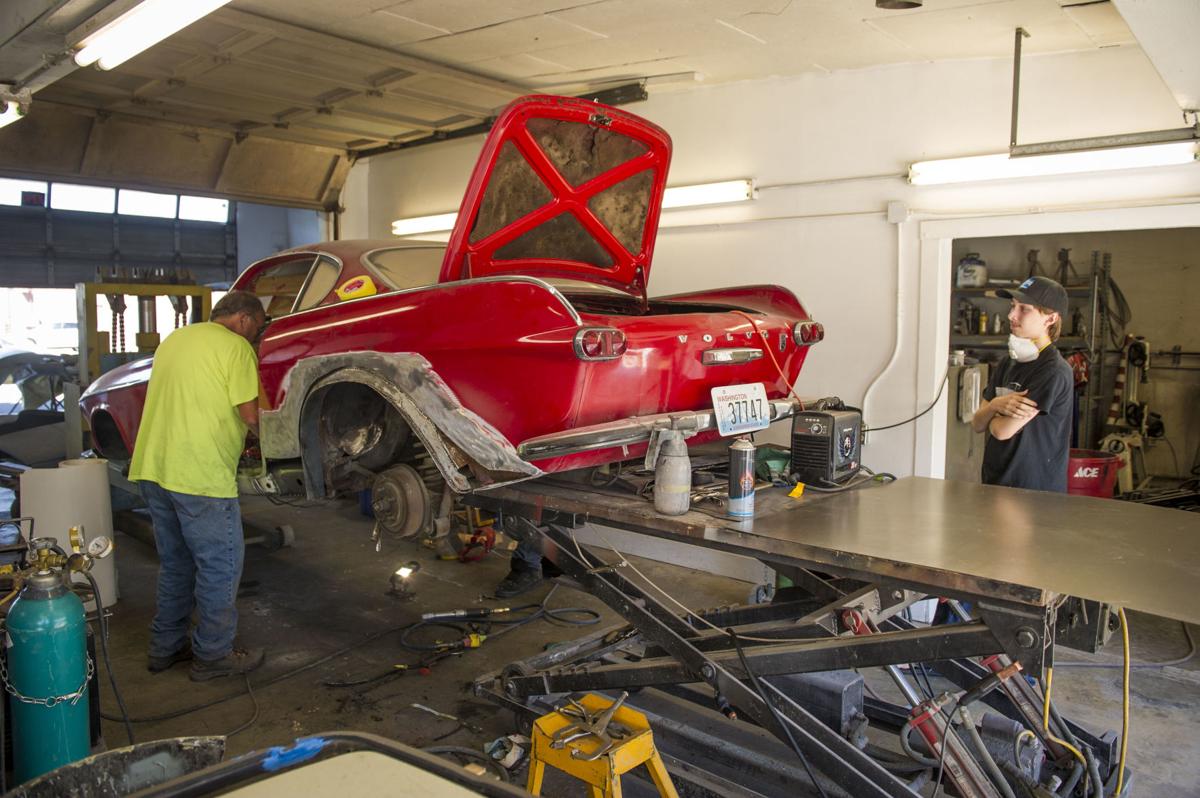 Work is being done on his Volvo by Jim Johnson. 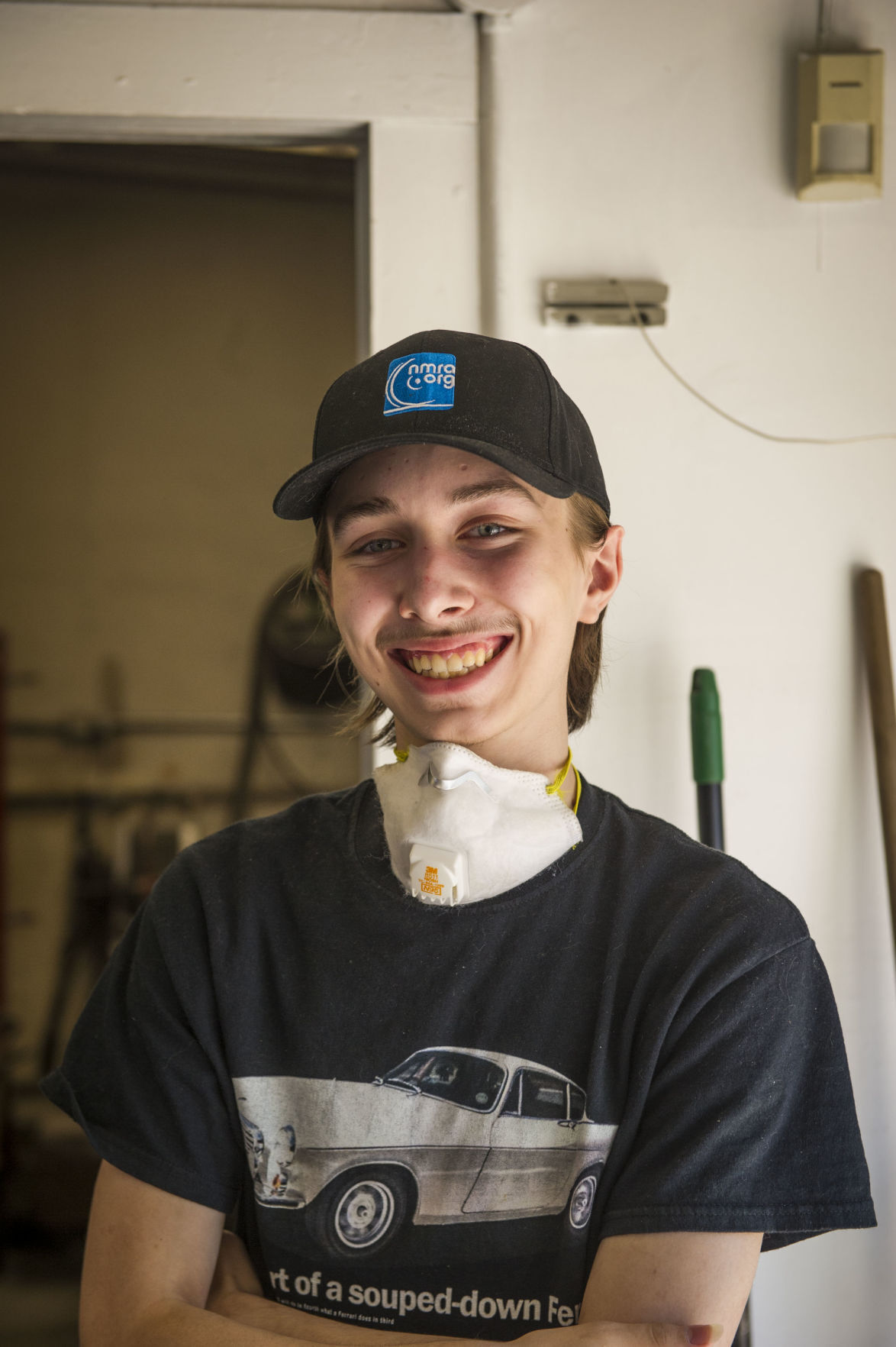 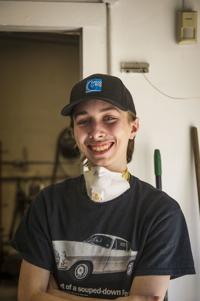 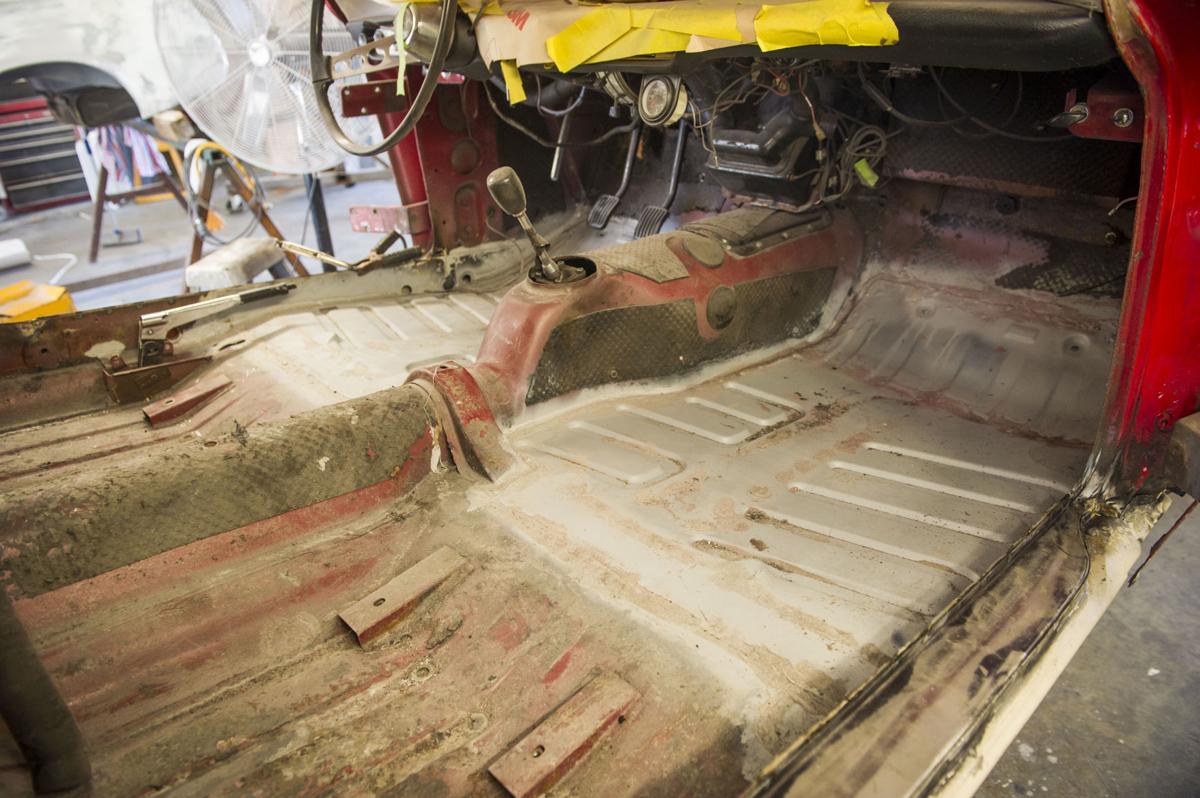 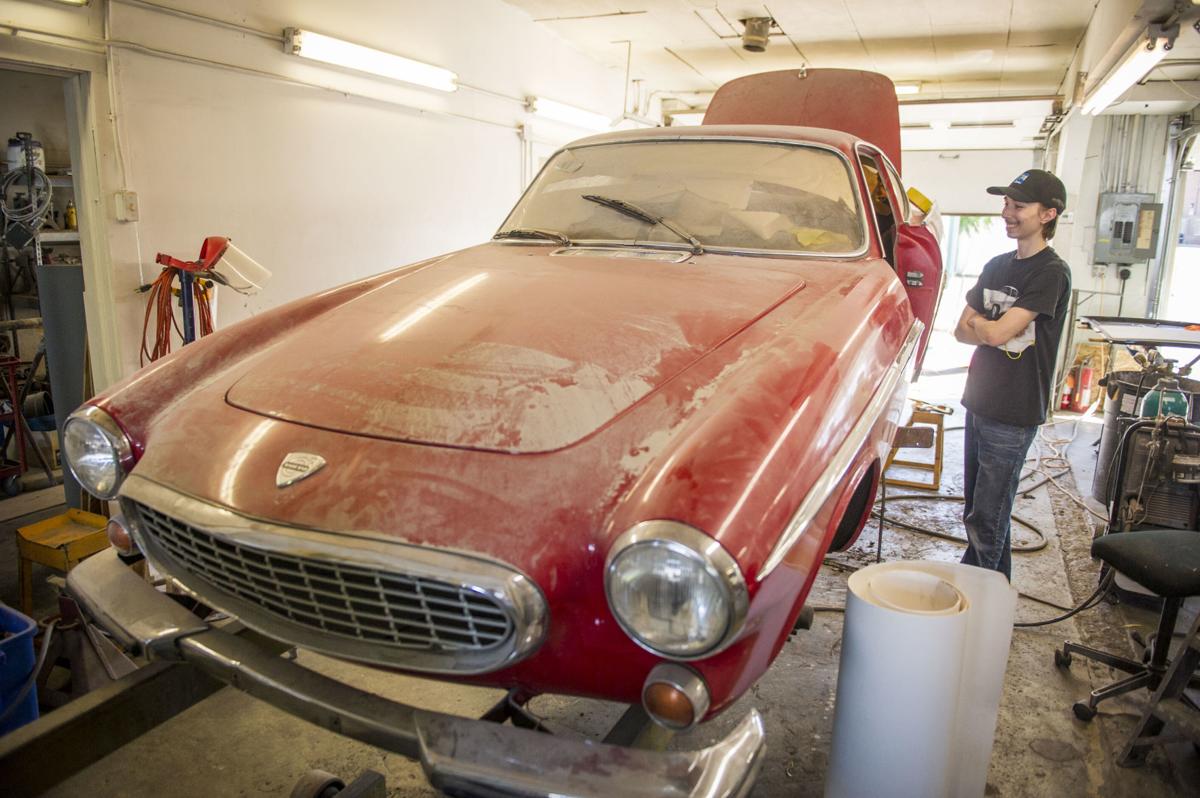 Drew Morgan looks on as work is being done on his Volvo by Jim Johnson.

Work is being done on his Volvo by Jim Johnson.

Drew Morgan had never met the car before.

It had been rolled out of a barn in the dark of night and whisked away to a repair shop in Yakima. He knew some basics about it — year, make, model, color. But his 16th birthday present was still a bit of a mystery until the day he finally was united with it in Milton-Freewater.

When he was young, his first choice may have been a train. He faithfully watched Thomas the Tank Engine, and then he graduated to model trains before eventually becoming obsessed with cars around age 12.

“If they made a movie about (Drew) it would be called ‘Trains, Guitars and Cars,’” said his mother, Belle Altera. “Because that’s how he started — trains, guitars and cars.”

As his admiration for the automobile grew, there was one in particular for which he had an affinity.

“I watched Charlie’s Angels as a kid and they had that one car in it and I always loved it — the 70s Mustang,” Morgan said. “I always said, ‘hey, I want one of those.’”

It was the first car he looked for when he was given the gift of choosing a car for his 16th birthday.

He poked around on Craigslist and eBay but to no avail. So his mother encouraged him to maybe look for something different.

“So then I looked around and looked at the most reliable classic cars,” Morgan said. “Classic cars for the daily drive. Cars that are practical but also cool.”

He saw the P1800 and assumed it was too expensive, just by looking at it. He also didn’t know it was a Volvo, so when his mother recommended the Volvo brand, he came across a P1800 for sale in Olympia.

The white 1970s era model was about $10,000 and in decent condition. Morgan thought about it for about a week. During that time, it went on eBay and sold for half the price at auction.

“About a week later I was looking around again because I was kind of unhappy that I missed it for half the price,” Morgan said. “Then while we were just sitting around and looking on Craigslist I found one in Tri-Cities.”

It was a red 1966 Volvo P1800. They emailed the owner right away. The owner responded and said two other offers were in the works, with one person offering to pick it up the next day.

So mother-son duo called on a friend from Yakima who could pick it up with a trailer. They also needed a way to pay the owner in cash without being there. Their friend happened to have the cash they needed so they could pay him back.

“So it must be a God thing, you know,” Morgan said.

Time was of the essence, because the other buyer was still planning on coming by with an offer to beat Morgan’s in the morning.

Their friend rolled the car out of a barn in the middle of the night and drove it to another friend’s shop in Yakima.

“It took him a couple of days to look at it and he said, ‘what have you gotten yourselves into?’” Morgan recalled.

The car was rusted out in some places and the floor was so bad, that the mechanic said the bottom could fall and it would “be like the Flintstone’s car,” Morgan said.

“We called around to a bunch of body shops and ... they didn’t even want the job,” Morgan said. “They were scared of it.”

Since the family was planning on moving to the Walla Walla Valley soon, they called some friends in the area and they eventually were directed to Jim Johnson at Jim’s Body Shop in Milton-Freewater.

So their friend loaded up the fixer upper and it arrived in Milton-Freewater where Morgan finally got his first look at his car.

“It was not exactly what we expected,” Morgan said with a chuckle. “(Jim) looked at it and said, ‘this is a big job but I think I can do it.’”

So several months of repair work began. Johnson lets Morgan get hands-on with the project when possible.

Altera noted how much work Johnson put into it.

“It wouldn’t have been possible without him,” Altera said.

Johnson was worried about getting parts, but Morgan was able to find a Sweden-based seller online where they could get the exact parts necessary.

With Johnson’s expertise, the car has been returning to its former beauty.

Morgan purchased the car in October and he hopes to have it ready to roll by the time September rolls around. He plans to enter into as many car shows as possible, including Wheelin’ Walla Walla Weekend, which was still on the calendar at the time this story was written.

Morgan says while he probably will only drive this coupe on the weekends, but does hope to keep his first car for the rest of his life.

“Most people try to find their original car when they’re 50 because they got rid of it and they want to replace it,” he said. “I hope to be the one who kept it the whole time.”