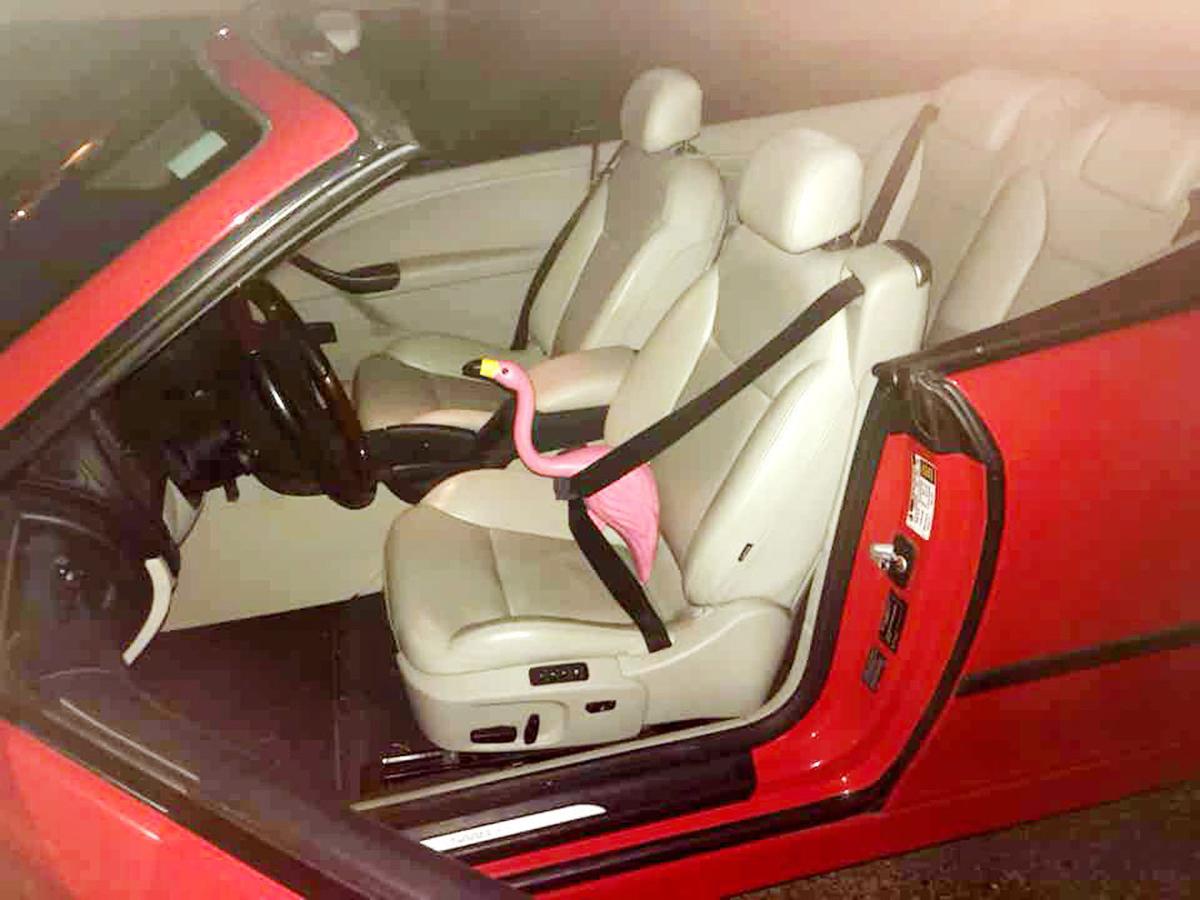 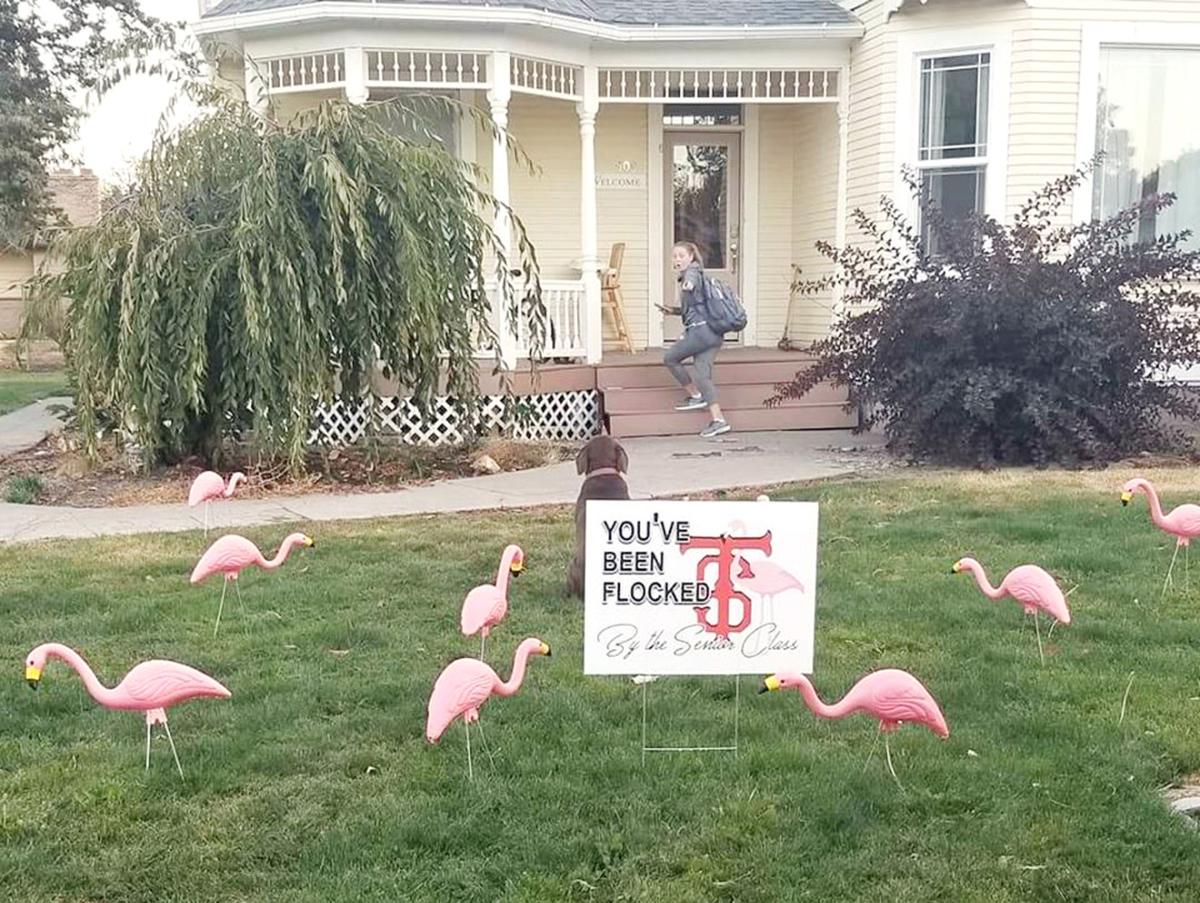 Headed out to catch the bus, Delayne Angel, daughter of Craig and Alecia Angel, spotted the flock in her yard in Athena and retreated to alert her mom to the flamboyance of flamingoes. Its back to the sign, the dog seems to take no notice. 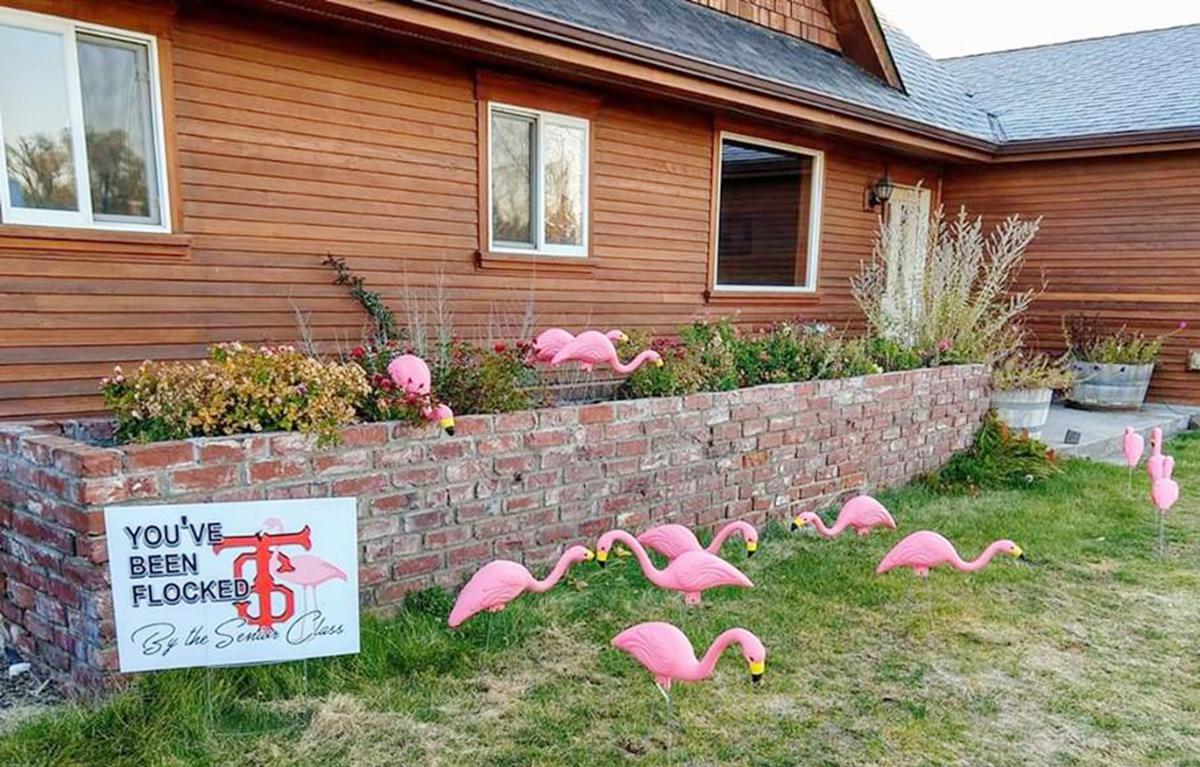 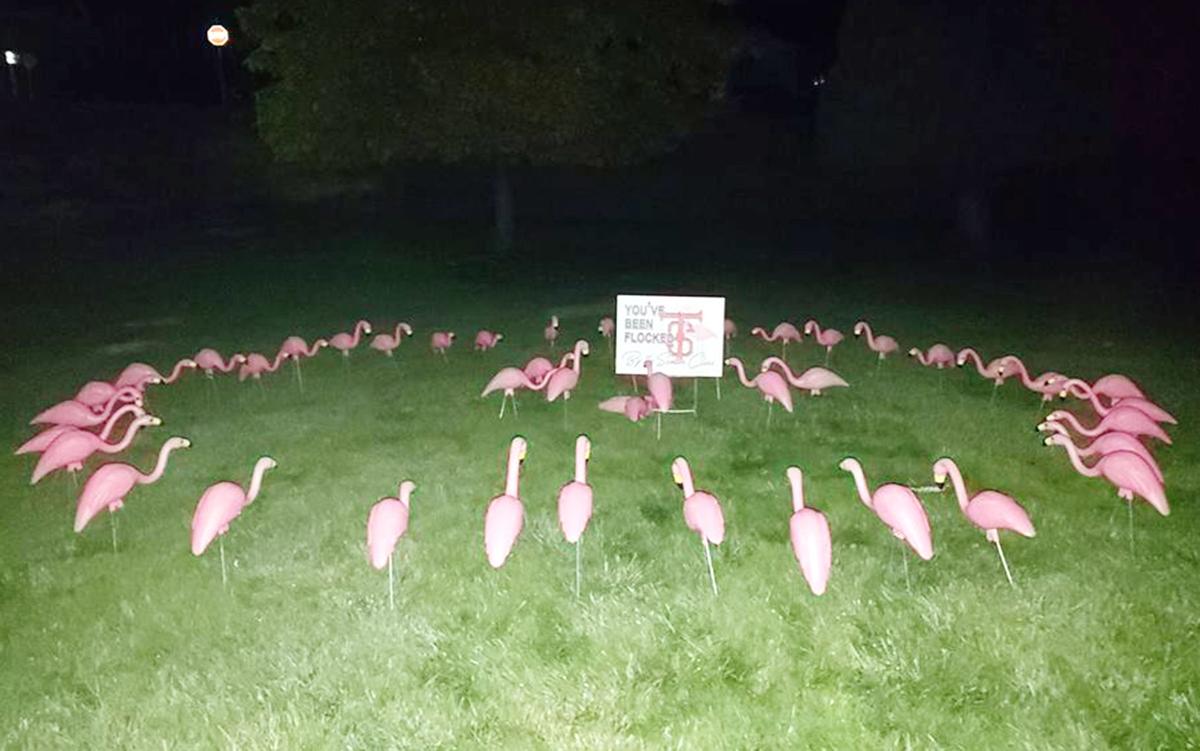 Under cover of darkness, TigerScot seniors at Weston-McEwen stealthily placed four flocks of flamingoes at a home in Athena. Embellished with a large TS, the sign reads, “You’ve been flocked by the Senior Class.” 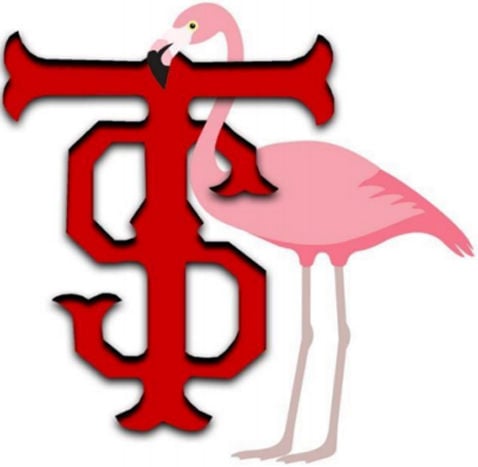 Headed out to catch the bus, Delayne Angel, daughter of Craig and Alecia Angel, spotted the flock in her yard in Athena and retreated to alert her mom to the flamboyance of flamingoes. Its back to the sign, the dog seems to take no notice.

Under cover of darkness, TigerScot seniors at Weston-McEwen stealthily placed four flocks of flamingoes at a home in Athena. Embellished with a large TS, the sign reads, “You’ve been flocked by the Senior Class.”

Consider yourself “flocked” or “flamingoed” if a clutch of long-stemmed Pepto-Bismol-hued birds end up in your yard.

After flock, flamboyance seems to be the second most common choice to describe a group of the distinctive wading birds. Other terms include pat, stand, regiment and colony. This goes along with a charm of hummingbirds, parliament of owls and murder of crows, and, because of their sound, a gaggle of geese.

The Weston-McEwen High School Class of 2019 has been “flocking” friends, family and businesses since Oct. 2. The flock-a-friend fundraiser will go through Oct. 31.

The well traveled four regiments of 12 birds each have been to Athena, Weston, Pendleton, Adams, Tollgate, Helix and Milton-Freewater, said organizer Sharee LaRue Wright, who ordered the birds and designed yard signs for the venture.

Proceeds will help the TigerScots fund their senior trip and a drug- and alcohol-free senior party after graduation. The birds and signs are expected to be gifted at graduation to the W-M Class of 2020 to hopefully make it an annual event to raise funds for the year-end drug-free party.

“We’ll be giving them the flamingo rights,” Sharee quipped.

Seniors Stephen Reitz and Sharee and Shane Wright’s son Patton Wright have been driving forces to get fellow students to help, Sharee said.

A pianist and trumpeter, Stephen plays French horn with the Weston McEwen Band and bag pipes with the school bag pipe band. He is a firefighter recruit in training with the Athena Volunteer Fire Department and is looking to fill in on a job for a friend entering basketball season. He wants to serve in the U.S. Army after graduation, then attend college on the G.I. Bill.

Patton and his parents live in Milton-Freewater, but he transferred to Weston-McEwen his junior year and is FFA and ASB president and captain of the football team there. He also wrestles on the team at McLoughlin High School. He started taking prerequisite classes at Blue Mountain Community College in his sophomore year. His goal is to go into critical care nursing, Sharee said. Patton used funds earned through FFA and 4-H to pay for college. He started flocking in Milton-Freewater on Oct. 22 and will continue shepherding the project there through Dec. 31.

As “kid herder” for the stealthy project, Stephen’s mom Suzie Reitz rounds up about eight students, who in two-person teams relocate the birds each night.

“It’s a great fundraiser, better than teepeeing someone’s house, and it keeps the kids out of trouble,” Suzie said. The family, including her husband John Reitz, live in Athena where he is fire chief and a police officer.

Parents and about 20 of the 40-member class are participating, Sharee said. They have to have driver’s licenses as they haul the birds from Milton-Freewater to Pendleton to all points of the compass in between.

The kids are having a blast, Sharee said. Their secretive project — they’ve yet to be spotted planting the birds — has been “all over Facebook.

Retired Weston Middle School teacher John Bartron, now of Pendleton, had parked his “pride and joy” convertible on the street, Sharee said. The students removed the legs from a flamingo and tucked it under the latched driver’s seat belt. Delighted by that, John donated  to their cause as it was so worth it, she said.

“He absolutely loved it,” added Suzie.

In another instance when there wasn’t a lawn, the innovative students stood the birs in flower pots beside an ambulance crew’s building.

The group’s $150 investment got them a set of 50 classic plastic birds from Home Depot. Another $75 went into four 18-inch by 24-inch yard signs with stakes from Vista Print.

In the dead of night, the birders place 12 flamingos with a sign, in the yards of the friends that supporters paid $20 to have “flamingoed,” Sharee said.

A sign accompanies each flock explaining that a friend of theirs paid to have them “flamingoed” in support of the fundraiser.

Furthermore, the sign notes to “flamingoees” that if they pay the students a $25 donation, the flock will be removed. A better deal is the $20 donation wherein students will remove the flock and place it in the yard of any friend the “victim” chooses.

The fundraiser feeds itself as the flamingoes migrate from victim to victim, Sharee said. Contact Suzie to arrange a flocking at 541-566-9010 or suzreitz@yahoo.com.

About those leggy pink birds

Don Featherstone designed the pink plastic flamingo in 1957 while working at Union Products, an article in Wikipedia reports.

The pop culture icon won him the Ig Nobel Prize for Art in 1996. It spawned a lawn greeting industry where flocks of pink flamingos are installed on a victim’s lawn in the dark of night.

Featherstone’s signature on the bird’s rear underside distinguishes genuine pink flamingos made by Union Products from 1987-2001. They were sold in pairs, with one upright and the other with its head low to the ground, “feeding.” Sometime after Featherstone’s retirement in 2000, Union Products began producing birds without the signature. But in December 2001, the Annals of Improbable Research, which awards the spoof Ig Nobel Prize, teamed with the Museum of Bad Art to protest the omission with a boycott. Union Products, in Leominster, Mass., stopped producing pink flamingos on Nov. 1, 2006.

HMC International LLC bought the copyright and plastic molds of Featherstone’s original flamingos in 2007 and subcontracted production to Cado Manufacturing, Inc. in Fitchburg, Mass. In 2010, Cado purchased the copyrights and entire Union Products product line, including the pink flamingo. Recently, its manufacture of the pink flamingo has increased.